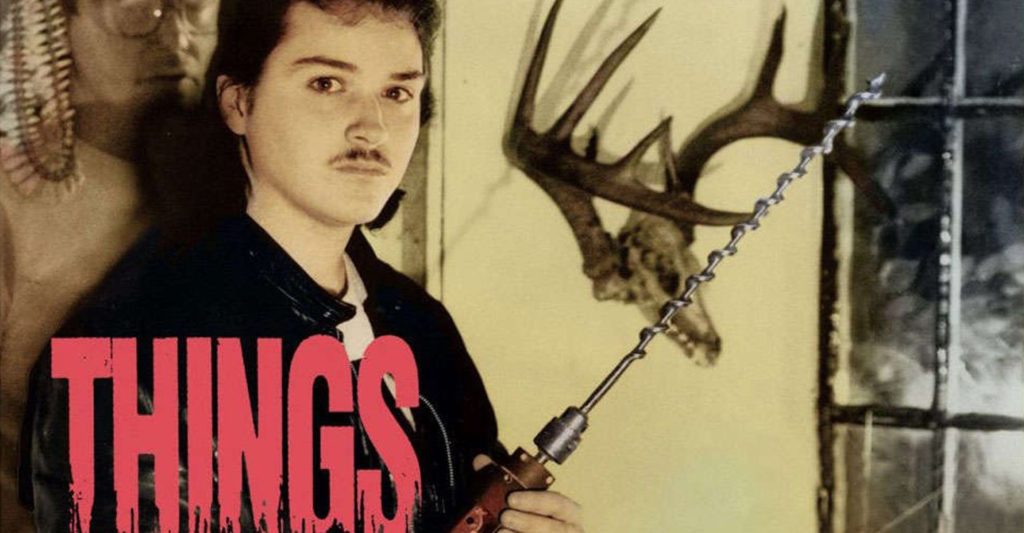 Well, I’ve stared at the unforgiving blankness of my computer screen long enough. I must proceed; there is nowhere to go but onwards, tackling (and trying to grasp) one of the most profound, odd, galaxy brain takes in horror cinema: Things (1989). As nondescript as that title is, the film itself is anything but: there are a million things to discuss in Things, and I’ll try my best to be at least as coherent as the film itself.

Made for around $30,000 Canadian and shot on 8 and 16mm, Things skipped theatrical and caught the tail end of a DTV boom in the late ‘80s. So yes, I am cheating a bit as it never played in theatres (let alone drive-ins), with patrons unwittingly taking home the box art with the mullet-maligned hoser holding a power drill (and believe it or not, it has something to do with the film).

Well, a lot has to do with this one, and often at the same time: mad labs and monsters, news broadcasts from a living room filled with TVs as a backdrop, beer drinking, boob tube watching, cockroach filled cheese sandwiches, Alastair Crowley and a pieced together cheap-ass Necromicon with tape recorder (demons sold separately), and so much more.

So much less as well; Things is bursting with oddities, some visual and others audio, yet moves without regard to pacing or editing from any sane corner of cinema. This is a horrific looking iceberg that regardless of speed, is impossible to move away from: the only direction is forward, into the unfocused abyss of reds and blues.

No, it isn’t The Color Out Of Space; nor is it The Evil Dead, which it so desperately wants to be. And making those comparisons will only lead you down a path of disappointment, and/or possible disgust. Things finds a very unique wavelength and holds on for the whole running time, a mean feat for even a “good” film.

But where are my manners, eh? You may be wondering what Things is about: Don (Barry J. Gillis – cowriter/editor/producer/2nd unit director) and Fred (Bruce Roach) head out to Don’s brother Doug (Doug Bunston)’s cabin for some partying. Upon arrival, Doug’s wife goes into labor and pops out giant ants instead of a human baby. Don, Fred, and Doug spend the rest of the film defending themselves from these – creatures, demons, experiments, or whatever the hell they’re supposed to be. Things, I guess. Beauty.

I’ll go easy on the Canadian-centric attempts at humor, because Things does all the heavy lifting for you; even for someone from here, the accents are somewhere between Pierre Trudeau and Bob McKenzie (those references are for those abroad; at home I’ll use Bruno Gerussi and Al Waxman), Gillis rocks a very era-appropriate mullet (still rocked in smaller villes where time has ceased), and I’m only assuming the beer is something truly unsettling like Labatt’s or Club. (Brrr.)

Perhaps it is the particular Great White North vibe that gives Things its flavor, but I think that’s only partly true; regardless of its cast, it’s what they do and say that stick with you. If you need a crash course in behavior that is especially unhuman, look no further – you’re surrounded.

Ambushed, really; assaulted would work too. The bargain basement wedding video credits aren’t necessarily an affront; those are standard for any SOV flick. No, the way the film is shot will pique cult interest though; a mixture of 8mm and 16mm (toggling back and forth all willy-nilly), cinematographer Dan Riggs not so much focusing on story, structure, and framing, but rather on just trying to keep the camera in focus. I’m sorry to say that Dan lost that battle.

But, the look of Things is important to the specific world created by director Andrew Jordan and Gillis; the viewer is left to search for standards to hold on to, for rules applied to cinema throughout the ages. Scenes are cut off midway, and awkward camera placements emit a discombobulated take on the usual Monster On The Loose flick. The Argento lighting would suggest a change in mood or plot development, if any of those metrics applied here.

‘So Scott, it just seems like you’re describing a shitty, no budget, regional backyard flick. Big deal.’ I hear you. But…well, let’s talk about what you hear, okay? Dubbed in after the fact, all of the actors (or rather, people pushed in front of the camera) are afforded the opportunity to give voice to their actions, and perhaps inject a bit of gravitas to their roles. If that were true though, one would miss out on Doug’s constant farting, or his Jerry Lewis cry of ‘WHAAAAAAA!!!’ when one of the ants crawls up his neck. As an audience we would also be deprived of Don’s tick brogue and faux, teeth-gritted outrage at the attack and everything else, including lack of beer. (This last part rings true.)

No one, and I mean no one, acts remotely human in Things; Doug veers from angry to psychotic with side trips to ecstasy all within a span of moments, Don pours whiskey on his head for no reason, and Fred just shrugs and guffaws before he disappears half way through – to the ‘third, fourth, or fifth dimension’, no less. He does return for the finale however, wielding a plastic chainsaw and laying waste, not to mention offering up the only loose plot thread to be resolved. Sort of.

But Things is a film robust with Sort Ofs: it’s sort of like The Evil Dead; it’s sort of an attempt by stilted third graders to make a grown up film; and it’s sort of a “mainstream” calling card for adult star Lynn, were she able to convey emotion and not side-eye her cue cards the entire time.

Nothing works in Things – at least in the traditional sense. The acting is bizarre, the dialogue even more so, and the effects, while bountiful, are less than impressive. But within this vacuum of ideals and talent lies a heart beating with the love of horror, rooted in friends’ sleepovers when the tape of The Evil Dead or Equinox (yeah, that’s right) gets thrown in the player at two in the morning. The inspiration is borrowed, the talent is on furlough, but the sincerity somehow pulls the soupy phantasmagoria that is Things into its own orbit, alone yet supreme. And unfocused as us all.

Things is available on DVD from Intervision and is streaming on Amazon Prime.