Filmmaking is incredibly hard work, said everybody who's ever made one for our enjoyment. It’s especially a trial by fire for inexperienced movie magicians, hoping that the wand will strike at least once or twice and that they just survive. With his reputation as a BTS guru with Blue Underground and Dark Sky Films in full swing, Severin Films’ David Gregory set out to make his feature debut, Plague Town (2008)—a tense homage to classic British and foreign horror infused with a fresh feel for the present. And now, a Blu from Severin that houses not only a surprisingly effective chiller, but also behind-the-scenes features that painstakingly showcase a vision dragged kicking and screaming all the way to the screening room.

It is odd for me to be discussing a film this recent. However, it makes perfect sense in context to the creators; Gregory and his co-writer John Cregan (Devolved) infuse Plague Town with touches of The Texas Chain Saw Massacre, Who Can Kill A Child?, Village of the Damned, and several others, so it already feels like the type of film Severin would unearth from decades ago. It establishes its own vibe, though, pushing through some familiar wallpaper of horror archetypes to arrive at a place of, if not uniqueness, then confidence—in the material and those who shape it.

Perhaps you can tell from the abovementioned films, but Plague Town (or A Slaughter in Plague Town, Gregory’s preferred title) is a Terrible Tots flick that comes in from the folk horror tunnel; this is the mood that settles under skin best—the lush greenery of the Irish countryside (hello, Connecticut!) is the perfect setting for a film that looks at the most cursed of a family tree.

I’m guessing; our opening has a woman giving birth as her husband and the town priest sweat profusely, and when she does birth the child, the priest goes to kill it, just like the others. But the husband intervenes, kills the priest, and the child lives. Apparently, this isn’t in the town charter—the kid living, that is—and the table is set for the film proper. Will we learn why the town is cursed? (No. Stop asking so many questions.)

Meet the Monohan clan: Dad Jerry (David Lombard - Across Dot Ave.), his new fiancé Annette (Lindsay Goranson - The Theatre Bizarre), his two daughters Molly (Josslyn DeCrosta - Devolved) and Jessica (Erica Rhodes - The Dinner Party), and the bad British boy she met on the trip, Robin (James Warke - The Sparrow and the Tigress). Dropped off by their tour bus to wander the countryside awhile, they naturally miss their pickup destination and soon find themselves not only fighting with each other, but have to contend with the children who come around after dark... and their games.

Plague Town is very much a ’70s film; it owes as much to Texas Chain Saw (’74) as it does to Let Sleeping Corpses Lie (also ’74), offering a mix of the pastoral and putrid as the deformed children get up to all kinds of nastiness, including but not limited to a razor wire-sharp round of Hide-and-Seek, and one of my favorite games, Make Sure Your Hand Stays On the Table. (These kids don’t mess around.) It also revels in the nihilistic as per standard ’70s operating procedures; as a kid myself at that time, I recognize now that most of my favourite horror films of the ‘70s have downbeat endings. I certainly had no idea of the cultural zeitgeist at the time, of the atrocities of Vietnam, of the mistrust in government. Or the mistrust of the young.

That’s really what Plague Town brings forward into the modern age—that pervasive paranoia of constantly being watched, that fear of helplessness—which was so prevalent back then, we just got used to it. (I certainly did; but not without a few existential nightmares along the way.) That isn’t easy to pull off against open spaces, but Gregory does; using shadow as film’s oldest ally, he and cinematographer Brian Rigney Hubbard (The Salton Sea), shooting on 35mm, capture the just out of reach feel of the best atmospheric horror. But then you also get to hear the kids, tittering as they flicker in and out of the light like sinful rodents; attention is paid to sound, and who’s making it.

The kids really are terrific (all the performances are solid) and presented as totemistic pawns in a sinister game, ready to be moved to the darkest parts of the board. The special effects work by Tate Steinsiek (The Amazing Spider-Man) is above and beyond what one would normally expect in a lower-budgeted film, and the film is filled with effective, practical kills. A little too much family time before the main attacks tests our sympathy levels, but not enough to derail once the hammer comes down (sickle, too). Plague Town has too much respect for the past to forget that in the best horror, chopping and character go hand in hand.

Loaded, just loaded; from the bottom up, Gregory’s short films are a gas, well-made college efforts, with a good dose of imagination already on display. The features on sound and the original EPK for the film are next, and both offer a taste of what’s to come. White Lace & Button Eyes is a full-on doc on the making of the film, and it is truly great. As put together by filmmaker Howard S. Berger, it veers between new Zoom chats, archival footage, and Gregory himself leading the way; if you want to see how a film crew perseveres through all the obstacles, then you need to watch this. I haven’t listened to the commentary yet, but based on Gregory’s energy levels, I’m sure it’s never less than entertaining.

At the end of the day, Plague Town is back in the hands of its creator; not to be condemned, but rather celebrated, and in grand form. Even if David Gregory didn’t make it, this film fits right in on the Severin shelf. Just keep it out of reach of children. 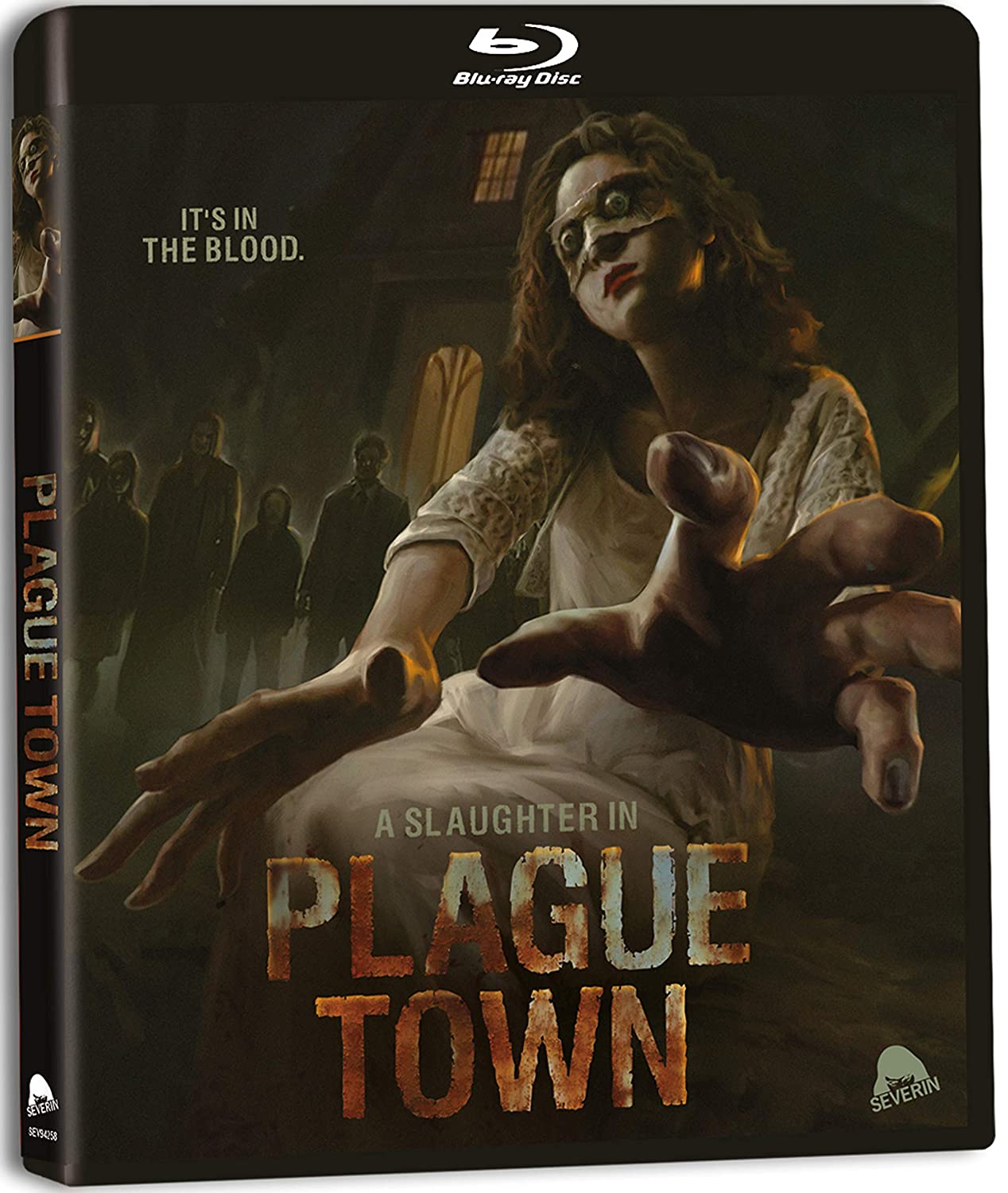