Hello, readers! In anticipation of the launch of Daily Dead’s 8th Annual Holiday Gift Guide later this month, we’re going to spend the next few weeks celebrating a series of independent artists who specialize in creating horror-themed merchandise. Be sure to check back every day throughout the month of November to learn more about all of these indie artisans, and hopefully these profiles will help inspire your holiday shopping lists this year. Cheers!

One of the most crucial elements to any film is its score, and author J. Blake Fichera has captured a series of fascinating and illuminating interviews with a handful of some of the most influential and sought-after composers in the world of genre film and television. Fichera’s first book, Scored to Death: Conversations with Some of Horror’s Greatest Composers, was released back in 2016, and now he’s back with more interviews in Scored to Death 2: More Conversations with Some of Horror's Greatest Composers, which is set to be released on December 1st and is currently available for pre-order on Amazon. To order your copy of Scored to Death 2, click HERE.

You mention in the book that you found inspiration for doing a second book at a John Carpenter show. In that moment, did you have any idea of just what exactly the process was going to be like for you the second time around? Did that come along organically throughout the interview process, or did you stick with the same approach from the first book, because it worked out so well for you the first time?

J. Blake Fichera: At that moment, I believed I would just pick up exactly where I left off when I finished the original book half a year earlier. I had no idea it wasn't going to be nearly that easy. How Scored to Death 2 actually came to be is a long and slightly convoluted story, so I won't go too deeply into it, but what I will say is that it was a much longer road than I thought it would be… and for a long time it didn't look like it was going to happen. My publisher was very cautious about a sequel—which in hindsight, is totally understandable. They wanted to wait a year before committing to a second book because they wanted to see how well the first book sold. A year later, when I discovered they were not interested in pursuing another book on the subject, I started Scored to Death: The Podcast—basically doing new Scored to Death interviews, independently, in an audio format. Eventually, for reasons that are not really worth going into, after about a year of doing the podcast, my publisher greenlit Scored to Death 2.

As for the interviews themselves, I did not consciously approach the interviews for the sequel differently. I thought I was doing more of the same. However, with a year off from interviewing, then a year of doing interviews for the podcast, the new interviews wound up feeling very different than the previous book's interviews—which I think is a great thing. I think a significant difference was my self-confidence. A certain amount of confidence and comfort came from having had the experience of already doing the original book. The other huge factor that played into my self-confidence boost was the friendships made while doing the first book. Between the first book and the podcast, I went from being just a lover of film music to being friends with composers like Joseph Bishara, Christopher Young, Harry Manfredini, and Alan Howarth. I didn't realize it at the time, but in hindsight, I can see how socially hanging out with those guys did affect how I approached later interviews. Subconsciously, I think I approached the podcast and Scored to Death 2 interviews feeling more like the interviewees' equal and less like just a fan.

Did you set out to hit certain milestones with this second book or was there a specific point that you reached where you realized you had crossed the finish line, interview-wise?

J. Blake Fichera: It should be mentioned that Scored to Death 2 is partially made up of interviews that originated from my podcast. In almost all of those cases, there is new and updated information exclusive to the book, but because I had a back catalog of interviews that I could pull from, the concept of a finish line was a bit murky. I didn't want the new book to just be interviews from the podcast. And I had to figure out, "If it is going to be a blend of the podcast interviews and new interviews… which of the previous interviews do I want to use, and who do I want to interview just for the book?" And, "How many interviews, total, should be in the new book?" There were just a ton of questions that I needed to answer for myself.

What’s been the most illuminating part of this process for you throughout the course of writing these two books, and doing all these interviews, and living with these projects now for more than seven years?

J. Blake Fichera: In a way, this journey started in the 1990s as a lover of cinema and a horror fan, but in a more direct sense, it began in 2013—seeing Goblin play live and then simply wanting to know more. In that quest for knowledge, I took a giant leap of faith and began contacting composers. That leap has changed my life. Through speaking with masters of their craft, I've learned more about the process of creating music for film than I could have ever imagined was possible. Wonderful friendships have been forged because of these books—not just with composers I've spoken with, but also with fellow film music lovers who contact me through email, social media, or walk up to me at horror conventions wanting to chat about music.

I guess the thing that stands out to me the most is the community. Before this journey began, I had no idea there even was a "film music community," let alone one that was so passionate, welcoming, and awesome. And I consider myself very lucky to now be a part of it.

I know it’s hard to pick “favorite” interviews, but have there been conversations that you’ve had throughout this process that ended up being meaningful to you on a personal level?

J. Blake Fichera: They all are meaningful in their own way, especially when you’re interviewing people who creatively contributed to films you genuinely love. Also, because I naturally approach interviews with a more conversational style, they are all personal—not just for me, but also for the person I'm conversing with. If I had to pick one, though, it would be my conversation with Bob Cobert. He was 94 years old when we first spoke, and sadly, he passed away a year later, in February of 2020. It is a blessing that I got to know him during the last year of his life. We had many phone conversations, not just for the book, but also privately, and he was a remarkably talented composer and just a great and funny guy. We had so much fun chatting together. The recordings we did for the book are absolutely hilarious to listen to, and I hope that the printed transcripts do him and those conversations justice.

I love that you were able to get Bob Cobert for this book, especially because I grew up watching episodes of Dark Shadows with my mom, and it’s great that you were able to capture his story before he passed away earlier this year. The interview you present in the book is wonderful, but I’m curious what that experience was like speaking with him?

J. Blake Fichera: My mom [who I also watched Dark Shadows with as a kid] was a single, working mother for a chunk of my youth, and my grandparents helped raise me. So I've always connected with the generations of people who grew up during the first half of the 1900s. Because of that, Bob and I clicked instantly, and I did not take his willingness to chat with me lightly. Aside from just the joy of speaking with him, I did feel a responsibility to document and preserve his story. He led a remarkable and long life and had an astounding career as a film and television composer. So, probably more than any other composer, I wanted to help him tell his story.

Talking with him was amazing. He was 94, and he was still as sharp as a tack. He had the mouth of a sailor and seemed to take a bit of joy in busting my chops. He genuinely seemed to love taking a stroll down memory lane with me, and we laughed… and laughed… and LAUGHED. It was so much fun, and it is an experience I will always cherish.

Was there anyone you had wanted to chat with between these two books that you just haven’t been able to nail down yet, for one reason or another? And do you think we’ll see a Scored to Death 3 come along in a few years?

J. Blake Fichera: There are so many fantastic film music composers that I could fill several volumes of Scored to Death books and do hundreds of episodes of Scored to Death: The Podcast. And when approaching working professionals, inevitably, some can't contribute—because of a multitude of reasons. To be totally clear, everyone who is featured in the new book was a first-round choice. None of them were/are filling a slot that was passed on by other composers.

However, some composers who were also asked and could not participate were Howard Shore, Pino Donaggio, Angelo Badalamenti, and Marco Beltrami. I don't know if a third Scored to Death book is inevitable. I've learned to never say never, but if I were to do another book, I think I would probably first explore a different subject before returning to this one again.

Visit Amazon and the official Scored to Death website to learn more about Fichera's new book, and go here to catch up on our previous Holiday Gift Guide artist profiles!

[Photo Credit: Above photo of J. Blake Fichera courtesy of the Scored to Death: The Book & Podcast Facebook page.] 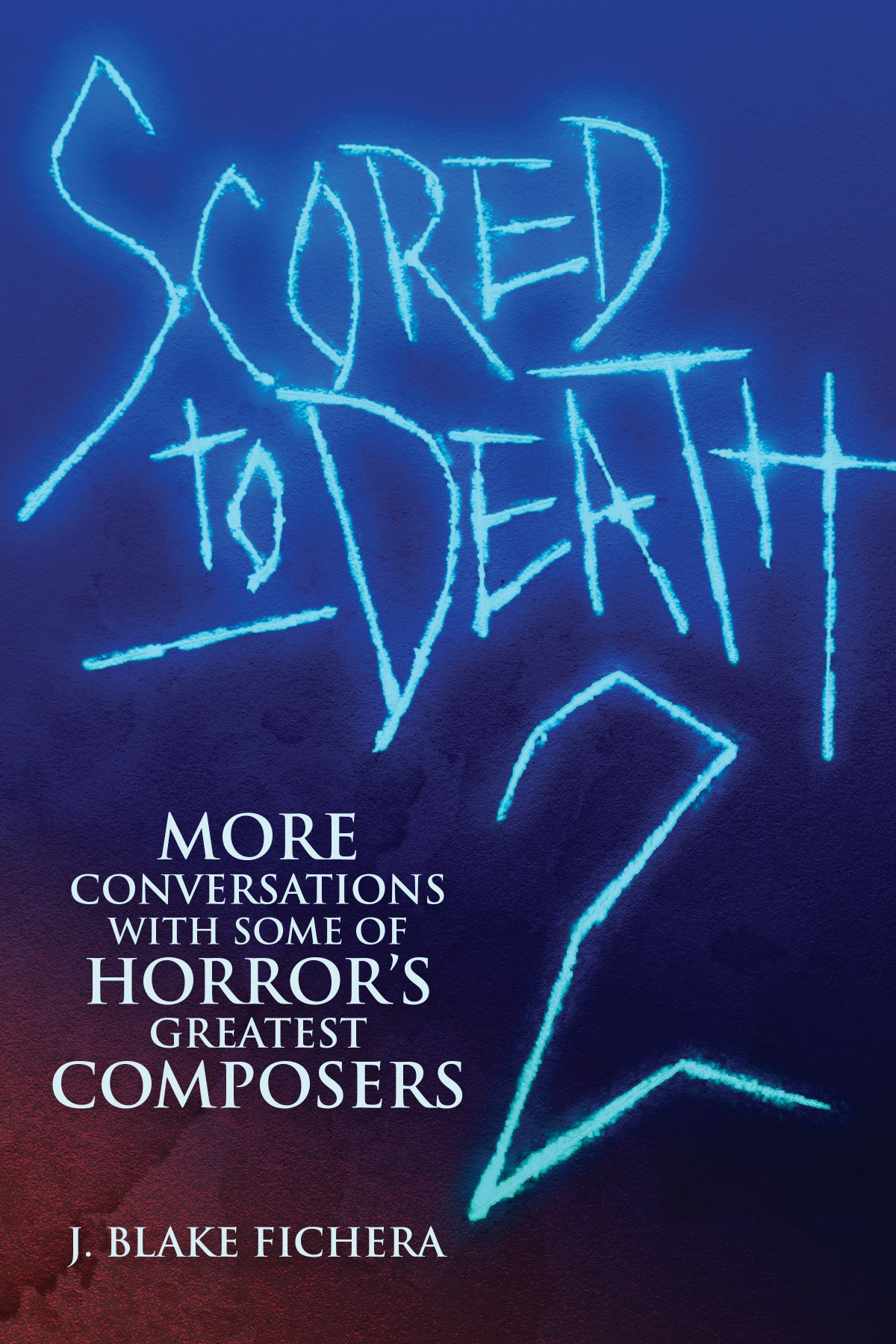