Happy Holiday Season, dear readers! Somehow, we’ve made it this far into 2020, which means we only have a handful of weeks left to this crummy year, which is something I think most of us are thankful for heading into the Thanksgiving holiday tomorrow. And because we are officially into the holiday season now, that means it’s also time to do some shopping, whether it’s gifts for yourself or for others. In any case, I’m someone who has always appreciated a good bargain and loves to save money wherever I can, and I think for most of us this year, we’re all looking to pinch those pennies wherever we can.

So, as usual, we’re kicking off Daily Dead’s 8th Annual Holiday Gift Guide with an initial batch of Black Friday sales that horror fans are going to want to check out over the next few days. Some sales are already underway, and others will be launching throughout the rest of this holiday week. Check out the details on some of the excellent Black Friday deals below and be sure to head back here on Friday for more sales as well.

Mondo: For 2020, Mondo is offering free shipping on all orders for $75 or more placed during Black Friday weekend. Beginning at 9:00am CST on Wednesday, November 25th, you can start your holiday shopping on Mondo’s site, which features a ton of new items that would make for perfect gifts to give (or receive) this season. Mondo’s free shipping offer runs through Monday, November 30th at 11:59 pm CST. For more details on all of Mondo’s gift guide ideas and more, be sure to check out their site at: https://mondoshop.com/. 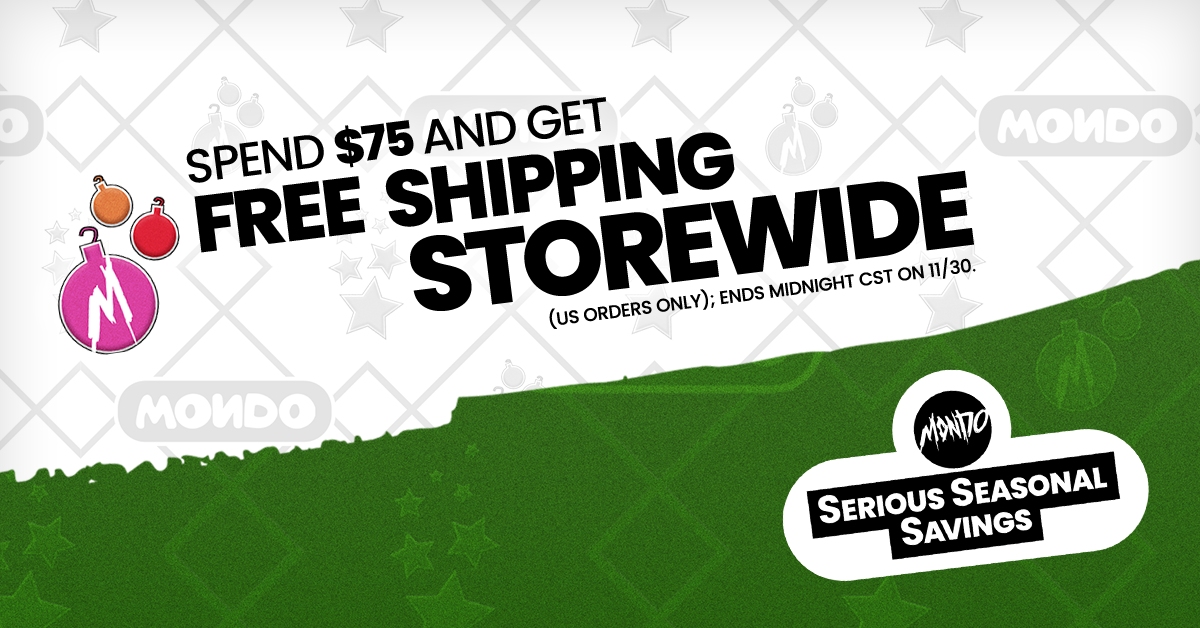 Fright-Rags: Fright-Rags is going all out on Black Friday once again, as they’re not only offering up a ton of sales to kick off the holiday shopping season, but they’re also launching a bunch of new items as well. Fright-Rags’ Black Friday sale begins on Friday, November 27th at 12:01 am EST and runs through Monday, November 30th at 11:59 pm EST. For 2020, FR has a brand new line of Silent Night Deadly Night merchandise that will surely keep you off the naughty list this year, as well as some new totes, face masks, an American Horror Story hat, and tons of discounts on tees, enamel pins, masks, decorations, socks, lounge pants, hoodies, and so much more. For the lowdown on the Fright-Rags Black Friday sale, check out their site at: https://www.fright-rags.com/. 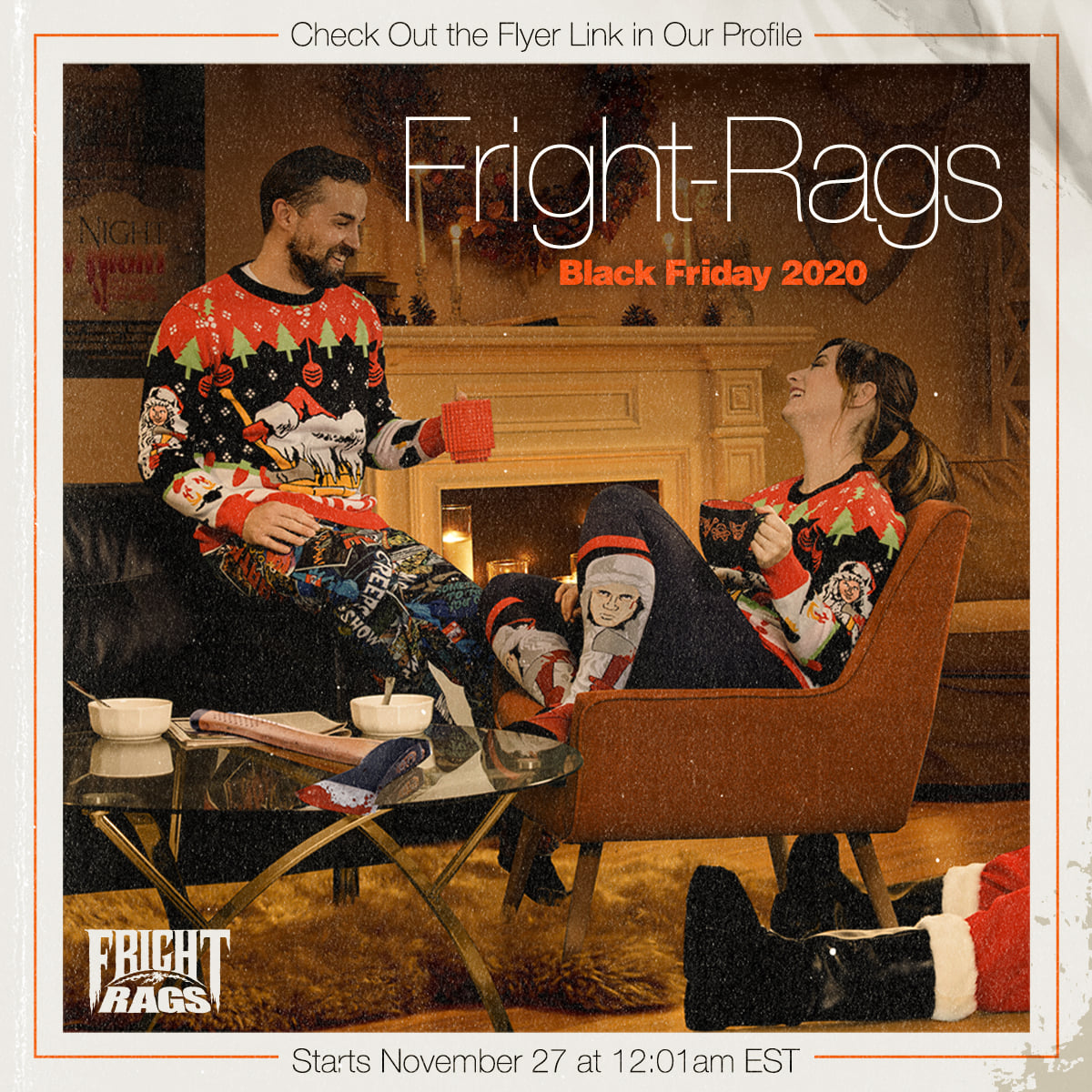 Cavitycolors: As their flyer says, Black Friday shopping at Cavitycolors’ site this year is a scream and it all begins today, November 25th, at 5:00 pm EST, so be sure to set a reminder for yourself so you don’t miss out on all the delightful deals, including free shipping (use the code CYBERHELL when checking out—code is only good for 24 hours), store-wide discounts ranging from 35–75% off, tons of restocks heading back to CC’s virtual shelves for their Black Friday sale, and they’re even releasing a brand new Mars Attacks Holiday Horror tee to boot. To read up on all the gory details of Cavitycolors’ Black Friday sale, head over to their site at: https://cavitycolors.com/.

Vinegar Syndrome: I hope your wallets are ready, dear readers, because Vinegar Syndrome is once again going all out for their Black Friday sale this year. Nearly everything on their site will be on sale for 50% off, plus they’ll be unveiling two secret VS Blu-ray releases, two brand new VS Archive Blu-ray titles, four limited edition catalog slipcovers, plus you can also purchase The Beastmaster, Fade to Black, and their Forgotten Gialli: Volume 2 set during their sale and so much more. Also, if you’re looking to sign up for their 2021 Yearly Subscriber plan, this is your only chance to do so. Vinegar Syndrome’s Black Friday sale kicks off at 12:01 am EST on Friday, November 27th and runs through Monday, November 30th at 11:59 pm EST. For more info on Vinegar Syndrome and their Black Friday deals, visit their online store at: https://vinegarsyndrome.com/.

Mixtape Massacre: One of my favorite horror games to be released in the last few years is Mixtape Massacre, and they’re going to be hosting another killer Black Friday sale this year, which begins on Wednesday, November 25th at midnight, and runs through Monday, November 30th. Their ad doesn’t indicate what the discounts will be for their Black Friday sale, so be sure to check out their site for more details at: https://mixtapemassacre.com/store/. 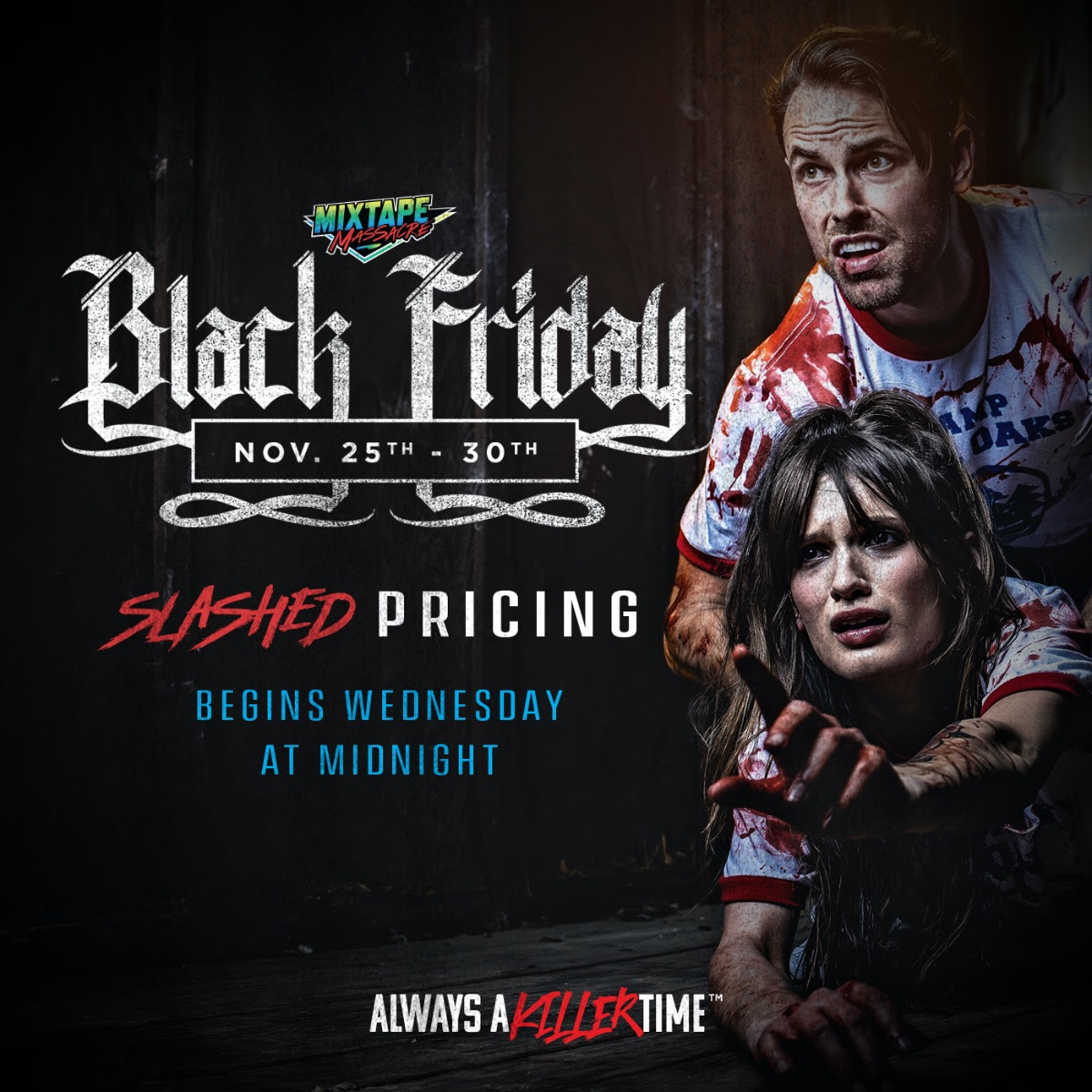 Pixel Elixir: Pixel Elixir is kicking of its annual Black Friday sale on Friday, November 27th at midnight CST, and will include tons of discounts as well as a bunch of new Krampus-themed products that will undoubtedly make for great gifts to give (and receive) this holiday season. Be sure to keep an eye on the Pixel Elixir Twitter account at https://twitter.com/PixelElixir for more official details on what they have in store for this year’s Black Friday sales.

Severin Films: The fine fiends at Severin Films are also gearing up for a ton of Black Friday deals for this holiday season that horror fans are definitely going to want to grab once their sale launches at midnight EST on November 27th. Severin’s sale runs through Monday, November 30th and shoppers can expect 50% off most Severin and Intervision titles, eight brand new releases to hit their site, brand new merchandise, a selection of clear-out Blu-ray and DVD titles, and more. Be sure to act fast, though, because items are sure to sell out quickly during Severin’s BF sale. For more details, check out their online store at: http://www.severin-films.com/.

Fangoria: Fangoria’s Black Friday sale is already currently underway and runs through this week. Customers can save 25% off all merchandise in Fango’s online store by using the code MERCH25 when checking out, or if you’re looking to buy a subscription for yourself or someone else, you can save 30% on the annual subscription if you use the code MARYLOU when checking out. For more details, visit Fangoria’s site at: https://shop.fangoria.com/. 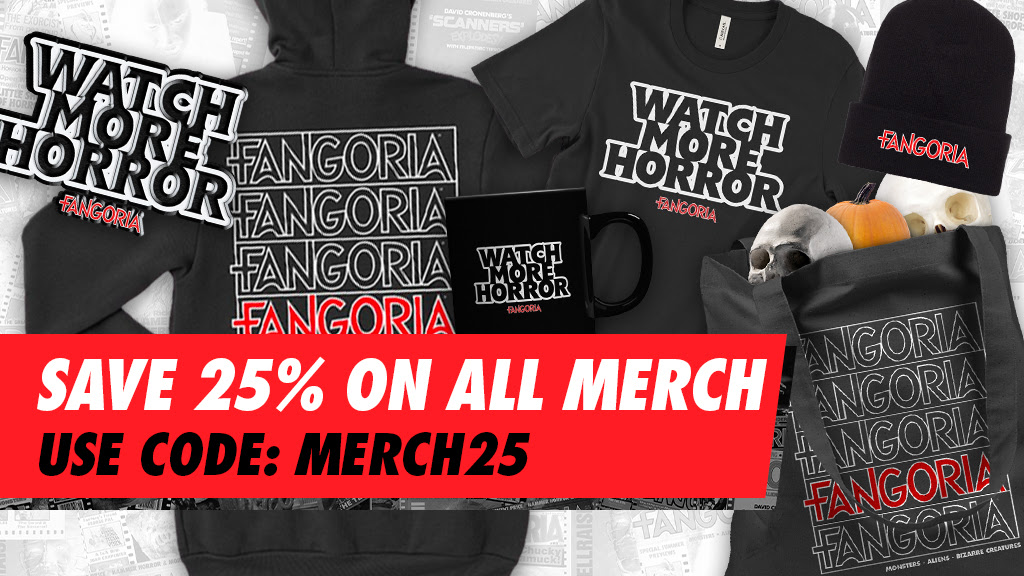 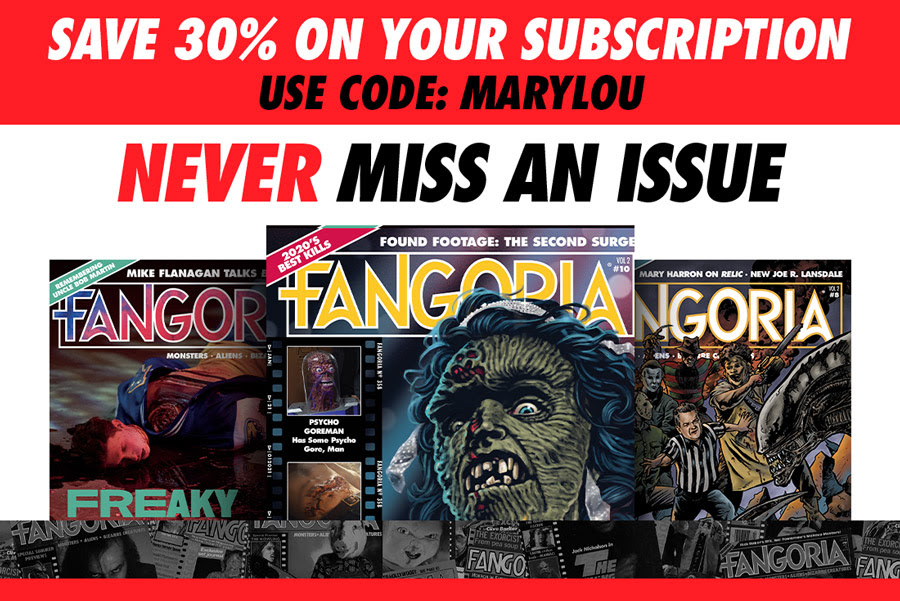 Final Girl Designs: If you’re in the market for some fantastic horror-themed jewelry and accessories this holiday season, Final Girl Designs will be hosting a 25% off sale beginning on Thursday, November 26th through December 4th. Just use the code BACKTOBLACK when checking out to save some money on your purchase. For more information, head over to FGD’s site at: https://www.finalgirldesigns.com/.

Hot Topic: It may seem like Hot Topic is for the youths, but in actuality, they have a great selection of horror apparel, accessories, collectibles and more that genre fans would love to receive this holiday season. Currently, Hot Topic is hosting an array of Black Friday deals on their site (and in stores), featuring a ton of deals, including $12 tees, a Buy One, Get One for $10 sale on Outerwear, $15 Pajama Pants, a Buy Two, Get One Free deal on Funko Pop! Vinyl Figures, and 30% off nearly everything else in their inventory. Hot Topic’s Black Friday deals are currently underway, so be sure to check out their site for all the gory details: https://www.hottopic.com/.

Target: As usual, Target is hosting all sorts of killer movie sales on their site and in stores (although I’d recommend skipping all the crowds this year), making it a perfect place for genre fans (and movie fans in general) to stock up on some great titles at huge discounts, where beyond the sale price, Target is also offering a buy two, get one free deal this week. 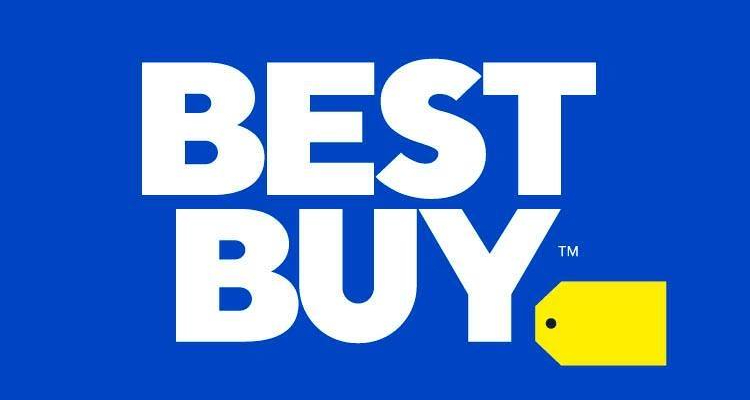 Best Buy: Best Buy is once again hosting a home media blowout for Black Friday week, and here’s a look at a ton of the titles that are currently on sale.

Be sure to check back here for more horror gift guide installments in the days ahead, and happy holidays to our readers from all of us at Daily Dead!