"Do you dare imagine what it would be like to be the last man on Earth... or the last woman?"

It seems only fitting that in the midst of a global pandemic, during a resurgence of pop-up drive-in movie theater's that artist Richard Fowlks would release the 13 card promo set for his Drive-In Double Feature Series Two trading cards.  Equally fitting are the films represented; the apocalyptic LAST MAN on EARTH and NIGHT of the LIVING DEAD - a double barrel shotgun tour de force of what are proving to be eerily accurate predictions of how the world could be destroyed by disease.

But this isn't the first Drive-In Double Feature trading card set.  Series One showcased horror classics White Zombie and The Ape by artists like Byron Winton.  While that set was awesome, Series Two is the sequel that might just put the original in the ground!

While there have already been a staggering number NIGHT of the LIVING DEAD trading cards, this is the first set that will be comprised exclusively of fan and promotional artwork.  And it's officially licensed by the filmmakers.  Moreover, despite Hollywood horror star, Vincent Price's illustrious movie career, and numerous single trading card appearances, there has never been a trading card set for LAST MAN on EARTH.  Drive-In Double Feature Series Two will be the first!

If that doesn't put your hearse in gear, just look at the beautiful, diverse style illustrations by no less than 37 top artists such as Robert Aragon.  The sketches are supported by a professional graphic treatment that Richard Parks says "paints a fun mental image" - delivered on standard 2.5x3.5" traditional CMYK plate printed trading cards.

Relax in the comfort of your automobile while Drive-In Double Feature Series Two serves up a delectable appetizer for crawling creatures with an inhuman craving, available exclusively via Kickstarter on Wednesday August 12, 2020.

For those with a bloodthirsty lust for human flesh, sink your fangs into some delicious palette-cleansing Promo Parallels;

Then, in a second Kickstarter campaign in October, you can feast upon an out-of-this-world entree;

And if that wasn't enough to satisfy every ghoul's hunger, depending upon the success of the promos, Drive-In Double Feature will also dish up a yet-undisclosed number of

Drive-In Double Feature Series Two - LAST MAN on EARTH and NIGHT of the LIVING DEAD coming to a screen and a speaker box near you!  Get them before they get you!

If you'd like to read more about NIGHT of the LIVING DEAD trading cards check out https://johnnymartyr.wordpress.com/2017/09/10/night-of-the-living-dead-trading-card-history/ 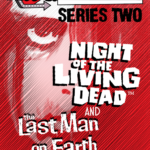 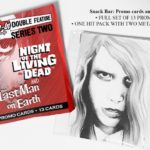 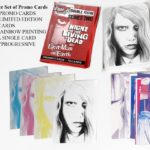 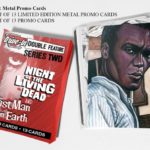 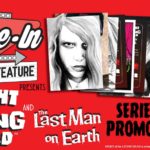