Emerald Fennell’s PROMISING YOUNG WOMAN to be Released on Digital on March 2nd and Blu-ray, DVD & VOD on March 16th

Below, we have the official press release with the full list of special features (including an audio commentary by Fennell), and in case you missed it, read Heather Wixson's review and Zofia Wijaszka's editorial on the film.

Press Release: Universal City, California, February 23, 2021 – Driven by a mysterious and tragic event in her past, a young woman seeks out vengeance in this thrilling and wildly entertaining story about a delicious new take on revenge in PROMISING YOUNG WOMAN, available to own for the first time on Digital on March 2, 2021 and Blu-ray™, DVD and On Demand on March 16, 2021 from Universal Pictures Home Entertainment. Proclaimed as “absolutely brilliant” (Matt Goldberg, Collider) PROMISING YOUNG WOMAN is the riveting, genre-bending must-own dark comedy of the year that combines masterful filmmaking with an unapologetic look at female empowerment and social justice with a deeply powerful twist. Hailed as “a game-changing masterpiece,” (Scott Menzel, We Live Entertainment) and “revenge, served red hot” (Peter Travers, Rolling Stone), the edgy thriller is the directorial debut of groundbreaking filmmaker Emerald Fennell (“Killing Eve,” “The Crown”) who wrote the vibrant, twisted and suspenseful story. Showcasing an incredible ensemble cast lead by Academy Award® nominee Carey Mulligan (An Education, Drive) and with an iconic soundtrack, fans can now go behind-the-scenes of the provocative and sensational film with exclusive bonus content on the Blu-ray™, DVD and Digital including featurettes with the cast and crew taking fans deeper into the edge-of-your-seat story that has everyone talking.

Dazzling critics and audiences alike, PROMISING YOUNG WOMAN offers a gripping and foreboding comedic look at toxic culture norms that permeate throughout society and has earned an extraordinary 91% “Certified Fresh” rating on Rotten Tomatoes®. Hailed as “the best film of the year” (Mara Reinstein, US Weekly), the captivating film has won over an impressive 48 awards to date and has racked up over an astonishing 165 award nominations to date. Garnering four Golden Globe® nominations including Best Motion Picture - Drama, Best Director, Best Performance by an Actress in a Motion Picture – Drama and Best Screenplay, the film has also earned six Critics Choice Award nominations including Best Picture, Best Director, Best Actress, and Best Screenplay, BAFTA longlisted in 13 Categories including Best Film Outstanding British Film, Director and Original Screenplay, a 2021 SAG Award® nomination for Outstanding Performance by a Female Actor in a Leading Role, a 2021 Writers Guild Award nomination for Best Original Screenplay, nine Hollywood Critics Association Award nominations and was named one of the Top Ten Films of the year by the National Board of Review.

Everyone said Cassie (Mulligan) was a promising young woman...until a mysterious event abruptly derailed her future. But nothing in Cassie’s life is what it appears to be: she’s wickedly smart, tantalizingly cunning, and she’s living a secret double life by night. Now, an unexpected encounter is about to give Cassie a chance to right the wrongs of the past in this thrilling and wildly entertaining story. Featuring incredible must-see performances from the entire cast, the bold and gritty PROMISING YOUNG WOMAN is led by critically acclaimed Mulligan who received the Los Angeles Film Critics Best Actress award for her role and has a phenomenal supporting cast including Bo Burnham (Eight Grade, The Big Sick), Alison Brie (Sleeping With Other People, “GLOW”), Clancy Brown (The Shawshank Redemption, Thor: Ragnarok), Jennifer Coolidge (Legally Blonde, American Pie), Laverne Cox (“Orange Is the New Black,” Grandma), Connie Britton (“Dirty John,” “Friday Night Lights”), Alfred Molina (Frida, Spider-Man 2), Adam Brody (Shazam!, “The OC”), Max Greenfield (“New Girl,” The Big Short), Christopher Mintz-Plasse (Superbad, Kick-Ass), Chris Lowell (The Help, Up in the Air), Sam Richardson (“Veep,” “New Girl”), and Molly Shannon (“Divorce,” Superstar).

By turns darkly hilarious and heart-wrenching, the astonishing film is packed with daring and thought-provoking moments from beginning to end by writer-director Fennell delivering a “delicately-wrapped bonbon laced with arsenic” (Keaton Bell, VOGUE). From Academy Award®-winning production company FilmNation Entertainment and the filmmakers behind The King’s Speech, Arrival and The Big Sick and alongside LuckyChap Entertainment producers Margot Robbie (I, Tonya, Dreamland), Tom Ackerley (Dreamland, Terminal) and Josey McNamara (Dreamland, Terminal) the “funny, sexy, smart and absolutely terrifying” (Kate Erbland, IndieWire) PROMISING YOUNG WOMAN is a must-own film with a profound message for all.

With the purchase of PROMISING YOUNG WOMAN on disc or digital, fans are eligible to earn points towards special rewards via the Universal All-Access Rewards program. Members can redeem their points for digital movies, signed collectables, box sets, win exclusive prizes and more! For FREE registration and details please visit www.MyUniversalRewards.com. 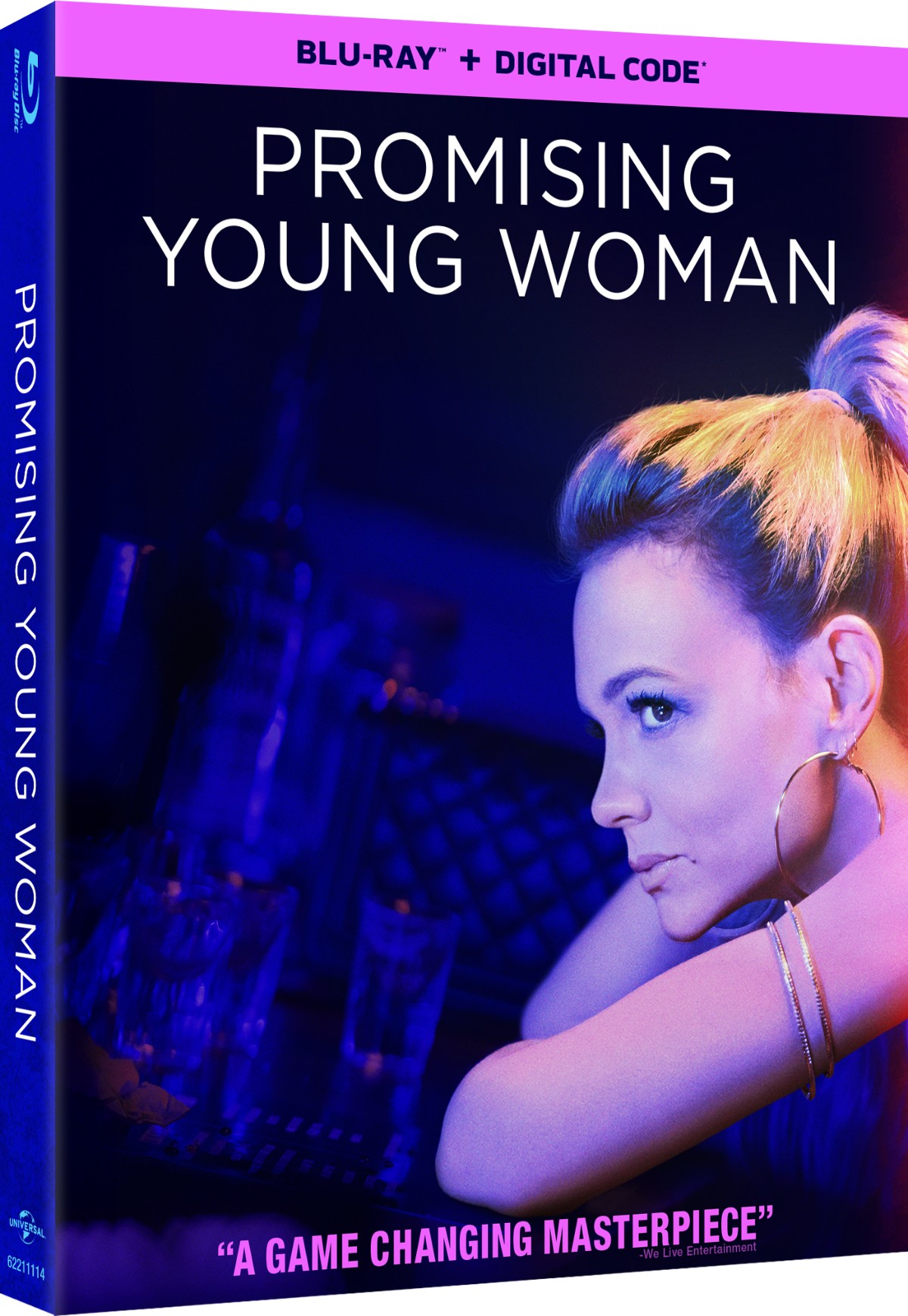