At this year’s Fantasia Film Festival, filmmaker Rebekah McKendry celebrated the world premiere of her latest project, Glorious, which will be debuting on Shudder exclusively on August 18th. Starring Ryan Kwanten, Glorious follows the down-in-the-dumps Wes into a remote rest stop bathroom where he’s confronted by an unimaginable entity lurking behind a glory hole of all places.

Recently, Daily Dead had the opportunity to speak with McKendry about her experiences working on Glorious, and during our conversation, she discussed how the project was indeed a product of the pandemic, just not in the typical ways. McKendry also chatted about collaborating with Kwanten on Glorious, the amazing practical effects created by Josh and Sierra Russell for the film, and more.

Great to speak with you today, Rebekah. I was already all in for Glorious because I really feel like Ryan Kwanten is one of these actors who's super underappreciated and I was so excited to see what your collaboration with him would be like. And what you guys created here is just so unique and so clever in the way everything unfolded. I was just really impressed by what you guys were able to do with this. So first and foremost, congrats.

Rebekah McKendry: Thank you so much. Yeah, this project was a total pandemic project. The original script by Joshua Hull came to me probably the third week of the pandemic. I mean, it was this scary time of the pandemic, we were Lysoling mail and wiping down bananas with Lysol wipes, and whatnot. It was a super scary time. And I read it and immediately was like, "Oh my gosh, Dave, we can come up with something really philosophical and put it into what is already a really good script."

And so we optioned the script and started doing some revamps of it, and we finished within three weeks and started taking it out. The response was immediately huge because it was something that could feasibly be shot during the pandemic. I hate to say this is a product of the pandemic, but I'm not sure if I would've gotten this film made as easily without that because the biggest selling point was that it's a Lovecraftian glory hole, but it's basically one or two actors the entire time. So that became one of the big things that moved it forward, aside from the crazy bonkers content.

I was also going to ask you, too, do you feel that because of the way we were already living that experience in a really heightened way that it heightened what you guys were able to do with this project then? There are definitely so many parallels because we were all just stuck. I mean, we weren't stuck with a Lovecraftian glory hole, but we were all stuck and contemplating things about our lives that maybe we just never took the time to do before.

Rebekah McKendry: That was a big part of it, and that's part of the philosophy that we really sought to put in there. Even more so was the cathartic reflection on your own life, the “what the fuck am I even doing moment” that I think we all went through. My husband almost got his realty license and I almost became a yoga instructor—we had a hell of a pandemic. So yeah. But we were all going through some shit, our kids were home, and at that time people were sending me scripts, but anybody who listens to the podcast knows that I really dig more violent, out there content, and so 90 percent of the scripts I was receiving were rape-revenge films. And so I had been lamenting to Jay Goldberg, one of my producers on this, a week or two prior that I was so sick of reading rape-revenge films, and that was never what I was doing, and why couldn't I just get a horror comedy because that's what I wanted. I wanted something absolutely bonkers and wild and out there, and literally a week later he was like, "Oh, I got something that just popped in," and then he sent that to me.

The night before I read the script we had just watched Repo Man for the bajillionth time, and we had had this big conversation about the beauty of setting heavy, philosophical conversations in the least likely environment. For us, Repo Man is a very philosophical movie, and we love the philosophies behind it. So, when I read that first script I finished it and immediately went out to Dave and was like, “I just read what is basically Waiting for Godot in a bathroom, and we're going to do this.” And immediately we got into it, and I do think a huge chunk of it was that it was just this beautiful containment, that it was all about reflection on your own life, and yeah, that it was just an absolutely fun romp, but it was still just this very cathartic thing.

Can you discuss working with Ryan on this? If he hesitated in this role whatsoever at any point in the movie, it doesn't work. He legitimately just goes for it, and I was so impressed by how far he was willing to push things with his performance in this.

Rebekah McKendry: So, Wes was both a hard and an easy role to cast. We knew from the start that Wes had to be a likable protagonist, he had to be somebody that you wanted to stay with throughout the whole thing. He's gone through some shit, he's down on his luck, he's clearly made some really bad choices, he's not in a good place right now, but at the same time, we feel for him enough that we want to stay with him. He has to have a charm to him, like that's his defense mechanism is that he inserts humor into everything, but that we had to want to stay with him in this environment and treat him as the protagonist.

I had seen Ryan in a bunch of stuff previously and had always been really impressed with his comedic timing. I also knew that he could push things, because I'd seen him on Them, the recent TV show that was on Amazon Prime, and he's got some crazy chops there. I had also seen him in Creepshow, the episode directed by Joe Lynch, which also had Barbara Crampton in it. Barbara was one of our producers through AMP, so when we were thinking of people that we wanted to reach out to, I was immediately like, "Barbara, I saw that Creepshow episode that you did with Ryan. Do you think Ryan would be interested in reading for this? I've just always been into his work." She was like, "Oh, I know he would love this." 48 hours later, I was on a Zoom with him, and it was clear that he got the character, he got the humor, he got the power of having to be on screen by yourself for basically a 90-minute movie, that is, in a sense, a chamber piece. It's a one-man show, to a degree, and the importance of that, and that he would be acting against somebody, but that it might not be an actual being in there with him for a chunk of it.

I'd love to talk about the effects in Glorious. As an effects person, I was totally into how this was so gooey, so gross, but so wonderful and amazing, too. You worked with the Russells, right?

Rebekah McKendry: We did, yeah, and we did, I'd say, 75 percent practical effects. I will always push practical effects as far as I can practically on set, and then do what we have to do in post to really clean up edges. I always say I'd rather build the monster suit and then just remove the zipper than have to construct the full monster. So, every single effect in this movie was in some capacity a practical effect, except for the giant monster for what is technically Cthulhu, because it's supposed to be Ghat's dad. Obviously, I could not build the cosmos, so that we did have to do the effects for that one, but everything else is all 75 percent practical with a little bit of augmentation.

That's amazing. What I really appreciate about what Josh and Sierra do, it just feels like people who are really having fun with effects.

Rebekah McKendry: Yeah, and both Josh and Sierra immediately got what I was going for with Ghat. They kept asking, "What do you want the monster to look like?" And all I would say was, "Fleshy, really fleshy. Vaginal, but not a vagina." And Sierra and I geeked out over this Instagram that we both follow called water bodies, which are all cephalopodic creatures, with a lot of worms and annelid creatures that are water-based. It just has all this really cool imagery of them. So, we knew that we wanted to go with this watery tone to all of the effects in it, even though we're nowhere near the water.

The other thing that the Russells were really good at trying to figure out were cost-effective ways for us to achieve things. I was scared when I said, "Okay, I need a giant amniotic sac that looks like there's something moving inside and then it bursts." And immediately, they put together this clear plastic tarp that's painted to have some texture, they put an opaque liquid in it, filled it with glow sticks, and boom—we had a glowing sac. There’s the shot where the sack is lowering underneath the stall a couple of times, and there were literally four crew members holding a plastic tarp full of liquid and just, "Okay, everybody raise it up, lower it back down, raise it back up," and that was the extent of it. Then we just went through and made the tentacles move around a little bit more than they actually were on set, and things like that. So, it was always about how we start off practical and then go further in post.

I know we're getting close on time, but I do want to ask one last question. I'm a really big believer that when you do something creative, obviously you put a piece of yourself into it, but I also know that you take a piece of it away with you. But I'm curious, looking at your experiences working on Glorious, what has been your biggest takeaway, whether maybe it's something that affected you personally or professionally, or maybe it was a combination of both?

I quickly learned with this movie that no matter what weirdo idea I threw in here, there was a way to execute it within our means, and within the pandemic restrictions as well, because we were limited to a certain number of people on set, so I had to figure out if some of these things could be done with the five people that we have standing there. So, it was definitely an act of pushing myself and making sure that I'm never holding back because I think that something might not be feasible production-wise. 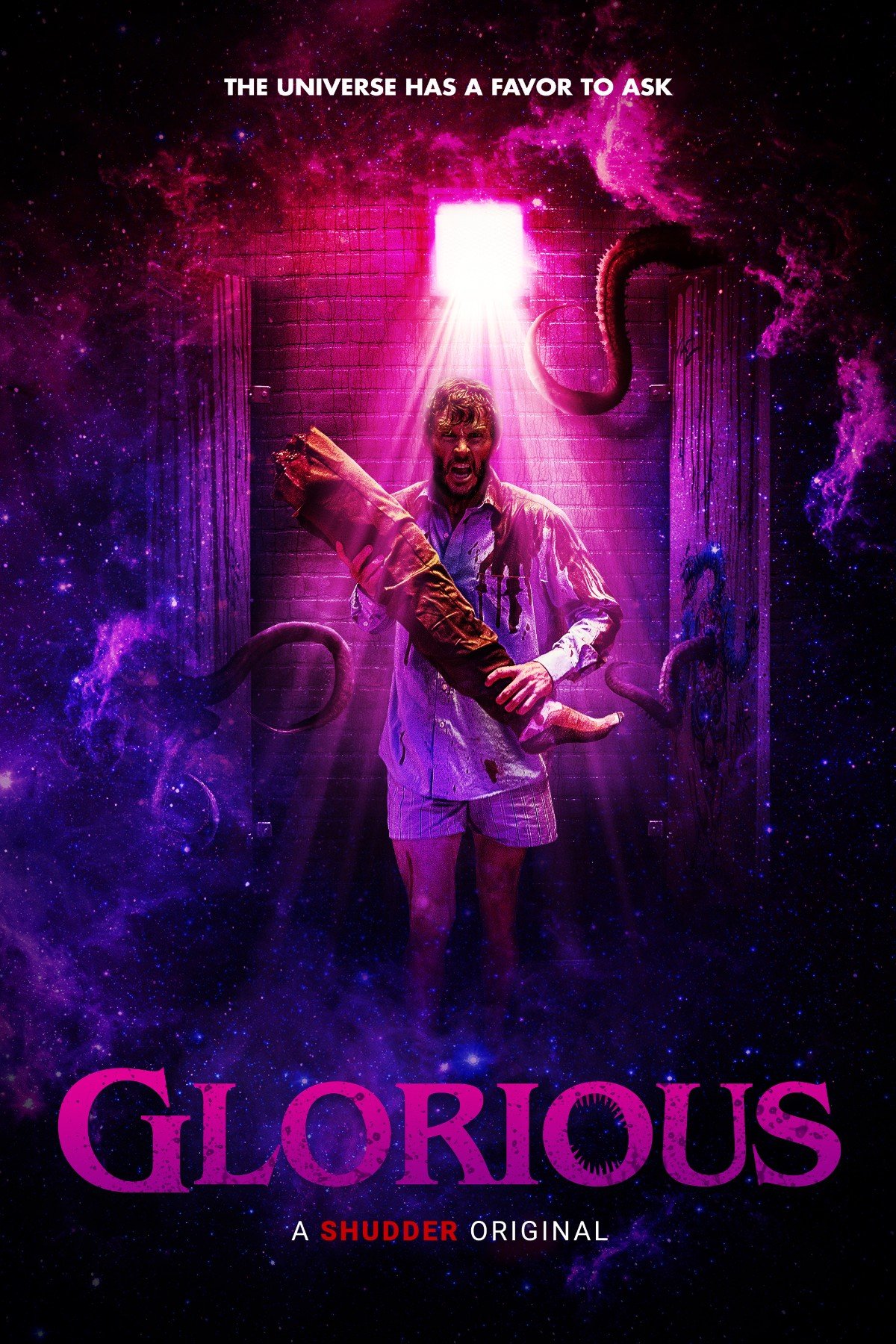