CANDYMAN is Available on Digital 11/2 and 4K UHD, Blu-ray and DVD 11/16: "Dare to say his name. Oscar® winner Jordan Peele (Get Out, Us) and director Nia DaCosta (Little Woods, Disney’s upcoming film The Marvels) expand on the infamous Candyman legacy with “a new horror classic” (FOX TV) that is “smart, stylish, and scary as hell” (Danielle Ryan, /FILM). Certified Fresh on Rotten Tomatoes with a score of 84%, Metro Goldwyn Mayer’s (MGM) CANDYMAN is back and yours to own on Digital November 2, 2021 and on 4K Ultra HD, Blu-rayTM and DVD November 16, 2021 from Universal Pictures Home Entertainment. All versions come packed with over an hour of bonus features including a never-before-seen alternate ending, deleted and extended scenes as well as special featurettes taking viewers behind-the-scenes of the film and deeper into this complex and deeply resonant contemporary take on the bone-chilling urban legend.

For decades, the housing projects of Chicago’s Cabrini-Green were terrorized by a ghost story about a supernatural, hook-handed killer. In present day, a visual artist (Yahya Abdul-Mateen II; HBO’s “Watchmen,” Us, forthcoming Matrix Resurrections) begins to explore the macabre history of Candyman, not knowing it would unravel his sanity and unleash a terrifying wave of violence that puts him on a collision course with destiny.

CANDYMAN will be available on 4K Ultra HD, Blu-ray™, DVD and Digital. 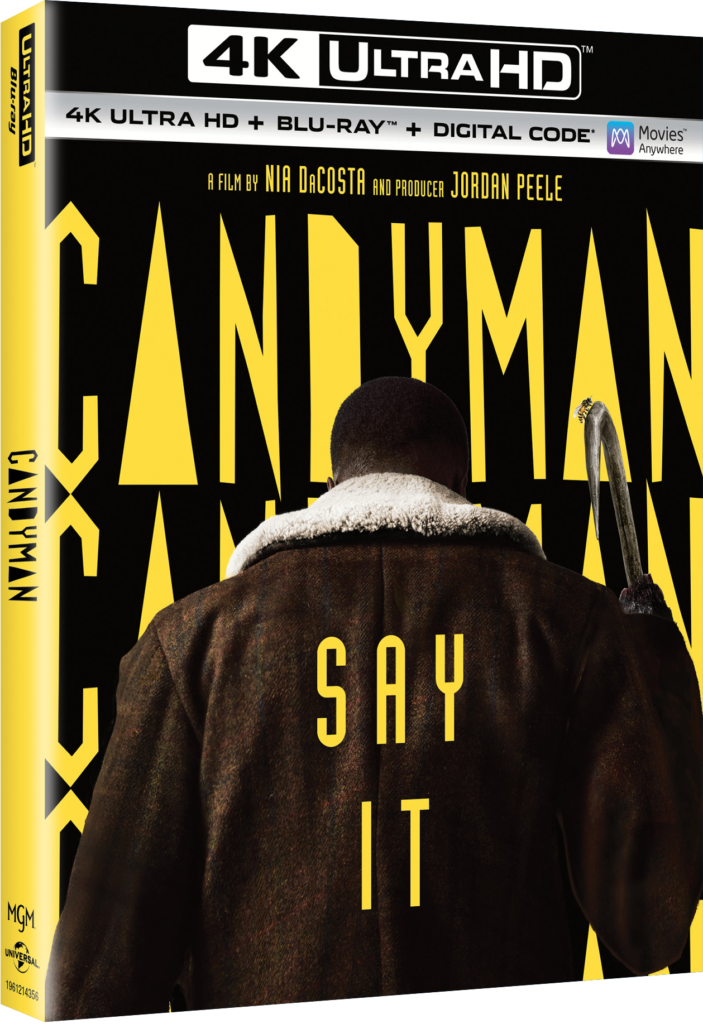 PRISONERS OF THE GHOSTLAND STARRING NICOLAS CAGE TO STREAM EXCLUSIVELY ON AMC+ AND SHUDDER NOVEMBER 19: "The premium streaming bundle AMC+ and Shudder, the premium streaming service for horror, thriller and the supernatural, announced that PRISONERS OF THE GHOSTLAND will stream exclusively on both platforms in the U.S. starting on November 19. The film, starring  Nicolas Cage (Mandy), made its world premiere at this year’s Sundance Film Festival.

PRISONERS OF THE GHOSTLAND is set in the treacherous frontier city of Samurai Town where a ruthless bank robber (Cage) is sprung from jail by wealthy warlord The Governor (Moseley), whose adopted granddaughter Bernice (Boutella) has gone missing. The Governor offers the prisoner his freedom in exchange for retrieving the runaway. Strapped into a leather suit that will self-destruct within three days, the bandit sets off on a journey to find the young woman—and his own path to redemption."

Well Go USA Acquires North American Rights to Irish “Creature Feature” Horror Pic UNWELCOME: "Leading international and indie film distributor Well Go USA Entertainment has acquired North American rights to the chilling creature feature UNWELCOME, which spins a tale of what happens to people who come in contact with the violent, bloodthirsty goblins known originally in Irish folklore as the fear dearg or “far darrig,” now often referred to worldwide as the “Redcaps.” The film, releasing in the United Kingdom by Warner Bros. Entertainment, Inc, will open in U.S. theaters from Well Go USA on March 17, 2022. In addition, AMC Networks’ Shudder—the premium streaming service for horror, thriller and the supernatural—has negotiated exclusive North American streaming rights with Well Go, with the film set to premiere later in 2022 following the conclusion of the theatrical window.

UNWELCOME, which is directed by Irish-born Jon Wright (Grabbers, Robot Overlords) and based on an original screenplay by Mark Stay, stars Hannah John-Kamen (Red Sonja, Black Mirror, Ant-Man and The Wasp, Ready Player One) and Douglas Booth (Loving Vincent, hit Netflix film The Dirt, Jupiter Ascending, Pride and Prejudice and Zombies) as a couple who escape their urban nightmare to the tranquility of rural Ireland only to hear stories of mysterious beings who live in the gnarled, ancient wood at the foot of their new garden. As warned by their new neighbors, in Irish mythology, the Redcaps will come when called to help souls in dire need of rescue, but it’s crucial to remember that there is always a dear price to pay for their aid.

“We are thrilled to bring this new spin on an age-old Irish legend to North American horror fans, who may or may not know about the legend behind this mysterious group of faerie folk,” said Doris Pfardrescher, President and CEO at Well Go USA Entertainment. “The entire ensemble of stellar, tried-and-true cast and crew members have really outdone themselves bringing this story to life, and we believe audiences will be delighted by the result.”