We're back with another installment of Horror Highlights! Learn about the series premiere of Hotel Paranormal, watch the trailer for the recently acquired Blood Vessel, check out the trailer for Butchers, learn more about the Unmatched: Cobble & Fog board game, and find out when you can pick up Deadtectives on Blu-ray & DVD:

HOTEL PARANORMAL: "NEW YORK (June 16, 2020) – Your hotel room may be more crowded than you think! Travel Channel’s new series, “Hotel Paranormal,” premiering on Saturday, July 11 at 10 p.m. ET/PT, follows the terrifying true stories of those who have come face-to-face with otherworldly hotel guests. Acclaimed writer, actor, musician and filmmaker Dan Aykroyd, who is no stranger to the unexplained, narrates each episode featuring spine-tingling stories of paranormal encounters told from stays at grand hotels, highway motels and inns around the world. From objects flying across rooms to ancient spirits trapped in lobbies to demonic guests, “Hotel Paranormal,” in 10 one-hour episodes, brings to life terrifying encounters with dramatic re-creations and paranormal expert insights.

“As a longtime believer in ghosts, I think the incredible encounters we’re highlighting on ‘Hotel Paranormal’ will open up a lot of minds and hopefully break through some of the skepticism people carry about the paranormal,” said Aykroyd. “I’m excited to lend my voice to help bring viewers across the United States, these gripping real-life ghost stories, many of which take place in their own backyards.”

In the premiere episode, a travelling salesman checks into a motel where he documents poltergeist activity with his cell phone. Fleeing into the night, he becomes possessed by the spirit of a murderer and in need of an exorcism. While on a school trip to the Vatican, a teenager and his friends accidentally set free an ancient evil and suffer the consequences. Then, a journalist is hunting down a story in Connecticut when she checks into a historic New England inn and fights off a supernatural attack. These guests have all become prey to a paranormal predator.

Additional episodes inside the hidden horrors of hotels include the following:

Supernatural events compel a hotel owner to dig up buried secrets, a chef is terrorized by a ghostly lady in red and a young boy is menaced by a dark apparition at a luxury hotel.

A security guard chases down a mysterious intruder at an isolated luxury hotel, an otherworldly creature follows two hikers back to their hotel room and a widow is accosted by a demonic entity at a small town bed-and-breakfast.

Renovations stir the ire of spirits at an infamous Arizona hotel, a porter is attacked by the ghost of a murderous pirate and a woman has a close encounter with a dead teenager at a historic inn.

A skeptic becomes a believer after a spectral bride appears on a hotel balcony, ghostly orphans attack a father and daughter in New Orleans and a man fights off the spirit of a serial killer at a roadside motel.

A cocktail waitress is attacked by malicious entities at a hotel bar and a bed-and-breakfast owner fights off a succubus while renovating a former brothel.

A romantic getaway becomes a night of terror, shadowy apparitions terrorize a front-desk clerk during the night shift and a security guard is accosted in a haunted bathroom at a glitzy California hotel.

A malicious presence attacks a bed-and-breakfast owner in the middle of the night, a couple awakens to a spirit shaking their bed and a woman gets a bizarre phone call at a seedy motel.

A hotel owner fights to save an entity from dark forces haunting the property and a woman longing for luxury in a four-star spa is confronted by a ghostly maid.

A security guard encounters a well-dressed spirit at an upscale California hotel, an invisible attacker leaves scratches on a woman and a young girl watches a shadow man emerge from the walls of her hotel suite.

Co-writer and director Justin Dix states, "I couldn’t be more excited to have The Horror Collective bring BLOOD VESSEL to US audiences! I’m obviously a big fan of my movie but I’m sure you will be too. Looking forward to making you care before the carnage strikes!"

“We are delighted to be working with The Horror Collective and know that BLOOD VESSEL is in great hands, as they embrace the genre and each of their acquisitions with as much passion as if it were their own film!” exclaim Storm Vision’s Brett Thornquest and Steven Matusko.

Jonathan Barkan, The Horror Collective's VP of Acquisition and Distribution for Feature Films, states, "I love period horror films as much as I love vampires, so when I saw BLOOD VESSEL, I knew that this was a project we had to get behind. I'm honored that Justin, Brett, and Steven trust us at The Horror Collective to give N. American audiences something chilling to bite into!""

A group of friends is stranded in real hell and must fight to survive the attacks of the most brutal brothers of the deep America. Torture and madness will follow.

Synopsis:
A family of sadistic butchers has dug into the back country and, from the deep freeze of winter to the dog days of summer, anyone who crosses their path is dead meat.

The most dysfunctional family since the Texas Chainsaw Massacre!

Unmatched is a highly asymmetrical miniature fighting game for two or four players. Each hero is represented by a unique deck designed to evoke their style and legend. Tactical movement and no-luck combat resolution create a unique play experience that rewards expertise, but just when you've mastered one set, new heroes arrive to provide all-new match-ups.

Featuring the atmospheric art of Andrew Thompson, Unmatched: Cobble & Fog introduces four new heroes for the Unmatched system. The Invisible Man uses fog to dart around the board and strike without warning. Sherlock, with the trusty Dr. Watson by his side, schemes and calculates to ensure victory. Dracula and the sisters slowly drain you of your power. Jekyll & Hyde uses the former's cunning and the latter's brute strength to win the day." 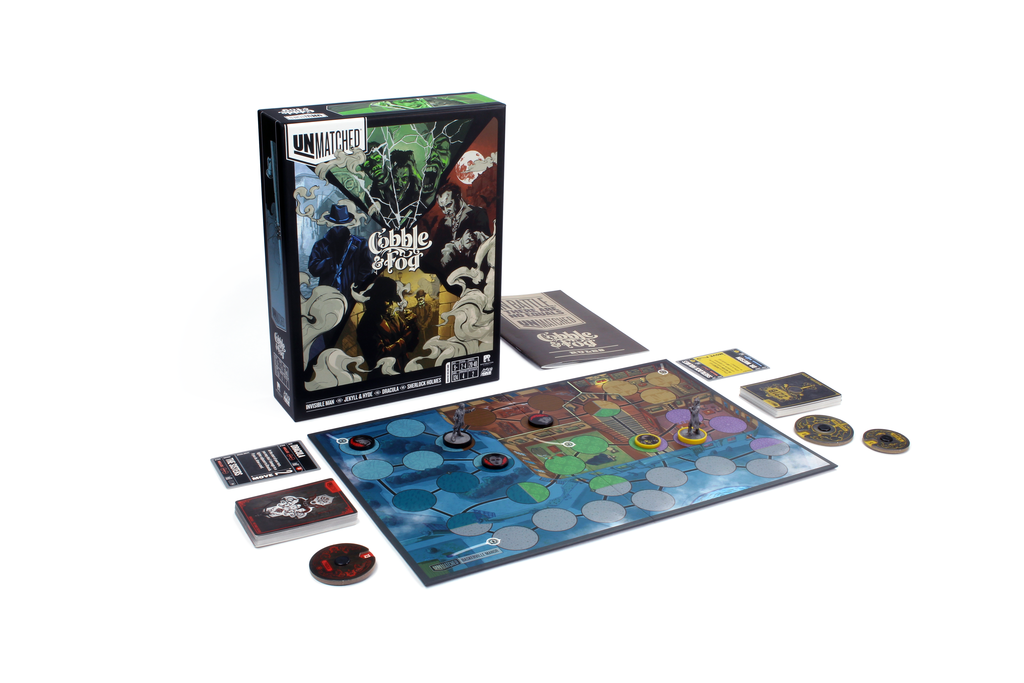 DEADTECTIVES  Blu-ray & DVD Release: "LOS ANGELES (June 16, 2020) – RLJE Films, a business unit of AMC Networks, has picked up select rights to DEADTECTIVES from Shudder, AMC Networks’ streaming service for horror, thriller and the supernatural. DEADTECTIVES will be released on July 21, 2020 on DVD for an SRP of $27.97.

In DEADTECTIVES, a team of reality TV ghost hunters experience true paranormal activity for the first time while filming a make-or-break episode in the most haunted mansion in Mexico. Facing cancellation on the one hand and supernatural entities on the other, the team must figure out a way to bust the ghosts, deliver the episode of a lifetime, and escape with their lives intact."