Actor Cecil Baldwin, best known for voicing Cecil Palmer in the cult hit podcast Welcome to Night Vale, and New York filmmaker Larry Fessenden, director of films such as Wendigo and The Last Winter and actor in Broken Flowers and Bringing Out the Dead amongst others, are the first American actors to join the cast of the award winning podcast.

Produced by Liam Geraghty and written and directed by Peter Dunne, Petrified tells the chilling tales of ordinary people encountering the supernatural, and their terrifying fates. Series one and two regularly hit the number one position in the Apple Podcast Fiction Charts and garnered fans across the globe.

The anthology series has won numerous accolades at the New York Festivals Radio Awards and the Irish Podcast Awards and was most recently nominated as Best Audio Drama at the Pod Bible Awards. The team created a terrifying experience at their very first live show earlier this year when they were invited to perform at the London Podcast Festival.

Her.ie says Petrified “captures listeners' attention from the get-go, reeling them in for a deeply unsettling ride, before delivering on some serious scares.” CrimeReads.com said “Petrified is extremely well written, expertly produced, and brilliantly acted”.

The film will be released by Sector 5 Films, a division of Worldwide Multi-Media, in February 2023 on most VOD platforms, including Amazon Prime, Google Play, Apple TV. The film will also be available for DVD online and in stores.

ARROW Offers Classic and Cutting Edge Cult Cinema Ring in the Holidays with Curated Horror: "Arrow Video is excited to announce the December 2022 lineup of their new subscription-based ARROW platform, available to subscribers in the US, Canada, the UK and Ireland.

The December 2022 lineup leads with the ARROW release of Eric Pennycoff's holiday horror The Leech, available December 5 in the US, Canada, UK and Ireland.

From Black Christmas to Rare Exports, there has long been a symbiotic relationship between horror and the season of good cheer. Now, writer/director Eric Pennycoff (Sadistic Intentions) continues this proud tradition with The Leech, a cautionary tale about the perils of opening your door to a stranger.

The Leech had its World Premiere at the Chattanooga Film Festival, and went on to make its international bow at FrightFest.

December 5 starts the holiday lineup with The Leech (US/UK/CA/IRE), a terrifically twisted offering from writer/director Eric Pennycoff (Sadistic Intentions), a Christmas cautionary tale about the perils of opening your door to a stranger. Agonisingly intense and rib-ticklingly funny in equal measure, The Leech serves as both a festive frightmare and a microcosm of the fault lines of contemporary America and you can see it first on ARROW!

On December 9, ARROW kicks off the Holiday Seasons with Fright Christmas (US/UK/CA/IRE) alongside snowbound chills and thrills.
Titles include: The Deeper You Dig, Kolobos, The Chill Factor.

Also on December 9, North American subscribers can enjoy a pair of haunted tales with Horror Hospital and Ghost House (both US/CA) to start the holidays early.

On December 12, J-Horror Legends land on ARROW (UK/US/CA/IRE). In the 90s the J-horror phenomenon swept the globe and horror fans were enthralled by a new kind of scary movie. The antithesis of gory 80s slashers, J-horror films were more restrained, but utterly terrifying nonetheless. Focusing more on the psychological and on ghost stories and curses inspired by and based on folklore and superstition, as well as a fear of the effects of new technology and the disintegration of the family unit, a whole host of incredible horror cinema was unleashed and J-horror Legends collects together some of the very best films of the sub-genre.
Titles include: Ringu, Ringu 2, Ringu 0, Ringu: Spiral, Dark Water, Audition, One Missed Call, One Missed Call 2, One Missed Call Final.

On December 16, go back in time with Paul Joyce's documentary Out of the Blue and Into the Black: a probing look at American independent film production post-Easy Rider, includes interviews with Peter Bogdanovich, Dennis Hopper, Monte Hellman and Roger Corman.

As stores and offices close for Christmas, curl up with three new offerings from ARROW on December 23: The Monster Club (US/UK/CA/IRE), The House That Dripped Blood (US/CA), and You Talkin' to Me (US/UK/CA/IRE): Profiling the legendary Taxi Driver and Goodfellas actor Robert De Niro with commentary from Quentin Tarantino.

The nostalgia continues December 23 with a Season of Video Nasties. Used to describe any of the films on the DPP (Director of Public Prosecutions) List put out in the UK in the 80s, these films were deemed to be “obscene” and could be seized by a confused British police force.

You can learn all about what went down in our two excellent Video Nasties documentaries, but if you just want to see what all the fuss was about (or tick some titles off your list) then go gorge yourself on an incredible unmatched collection of nasties that would make the Daily Mail pee its pants.

December 30 closes out the most wonderful time of the year with a look back at blood and mayhem with the debut of The Stepfather II and The Stepfather III (both US/CA) and Stanley Kubrick: The Invisible Man (US/UK/CA/IRE): Paul Joyce's definitive and lasting tribute to one of the greatest film directors of all time.

Last but far from least, ARROW brings subscribers The Best of 2022 (UK/US/CA/IRE).

It's been another Incredible But True year for new and exclusive releases on ARROW. From the dark side of Hollywood in Jim Cummings' The Beta Test to ufology conspiracy thriller The Sacred Spirit, from a theological battle for the soul in The Righteous to the latest absurdist quirk fest from Quentin Dupieux, and from the essential feminist monster stalking of Take Back the Night to the grimy and crazy splendid scuzz of Hotel Poseidon.

We will always strive to bring you the wildest coolest new Cult films here on ARROW, so dive into this collection and make sure you've missed nothing and rewatched your favourites and we'll work on trying to top ourselves for you in 2023!

ARROW is available in the US, Canada, the UK and Ireland on the following Apps/devices: Roku (all Roku sticks, boxes, devices, etc), Apple TV & iOS devices, Samsung TVs, Android TV and mobile devices, Fire TV (all Amazon Fire TV Sticks, boxes, etc), and on all web browsers at https://www.arrow-player.com.

With a slickly designed and user-friendly interface, and an unparalleled roster of quality content from westerns to giallo to Asian cinema, trailers, Midnight Movies, filmmaker picks and much, much more, ARROW is the place to go for the very best in on-demand entertainment. 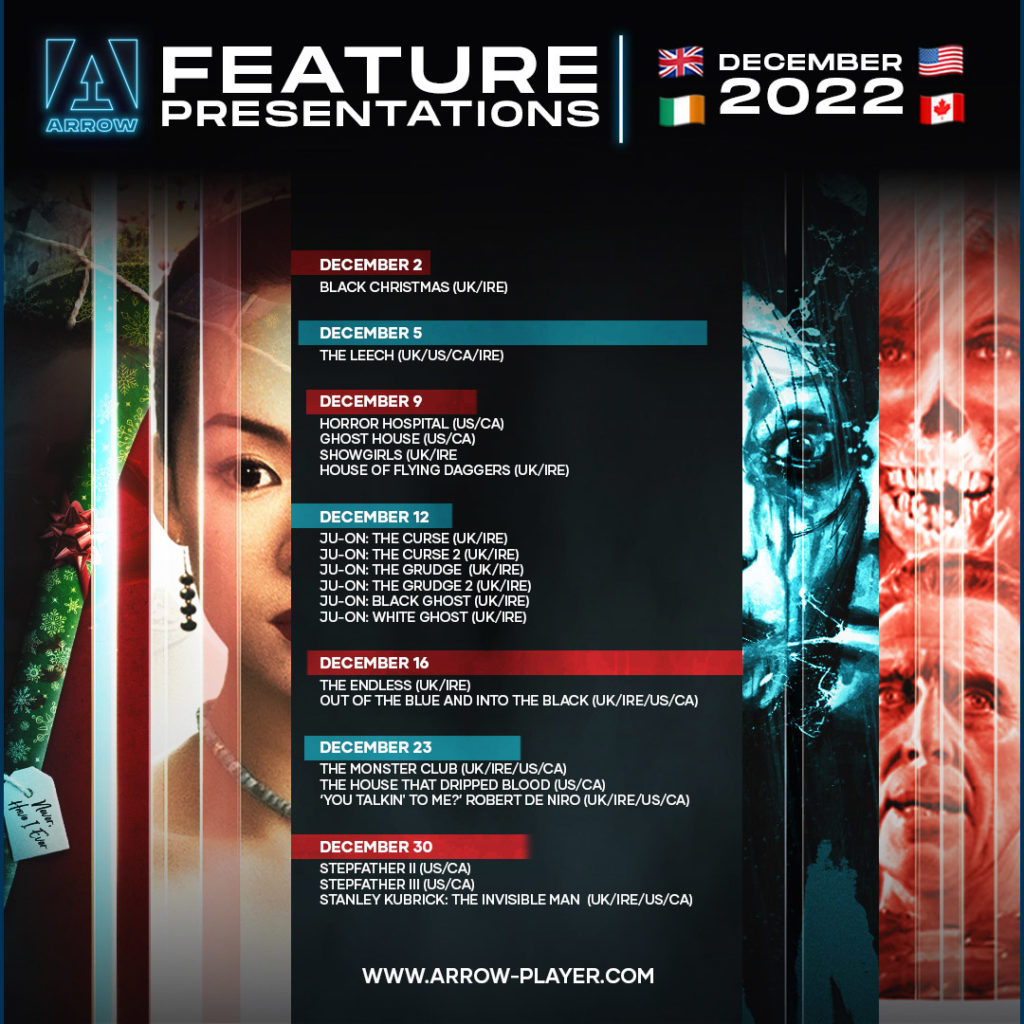