Horror Highlights: SAINT KOTAR, DEBBIE AND THE DEVIL, THE WILD MAN OF THE NAVIDAD, DYSMORPHIA, SELF ISOLATED

SAINT KOTAR: "In this story-and-choice driven psychological horror detective game, you play as Benedek and Nikolay – two troubled godly men in search for their missing relative in an ancient God-devoted town called Sveti Kotar. Here,an unknown presence preys upon the weak and sways on devil worship and witchcraft. Evidence points to your missing relative being involved in the grisly murders and the occult, but what is the truth? Are you also to blame for what happened? Will you put the pieces together and unravel the truth behind the town’s centuries-old horrid presence? Or is madness going to be your fate?

DEBBIE AND THE DEVIL: "Official Trailer for Debbie and the Devil -- the greatest horror-comedy ever made. After a typical school shooting, two children seek refuge in a movie theatre where they meet a nefarious theatre owner who presents the Debbie and the Devil Trilogy — three interconnected horror films: "Gore Garage 6", "Tears Of A Bloody Rose", and "Debbie Flesh & Bone"."

THE WILD MAN OF THE NAVIDAD: "Laced with tension-fueled anxiety and a moody aura, “The Wild Man of the Navidad” realizes an old Texas legend with a vintage '70s horror visage. Based on the journals of Texan Dale S. Rogers, the film follows Dale, his wheelchair-bound wife Jean, and her oft-shirtless, lazy-eyed caretaker Mario. They live on a ranch in the sparsely populated, moonshine-soaked Texas town of Sublime, where Dale's family has lived for more than five generations. Each night, he sets food out on his porch, but this isn't for any pet cat -- it's for a mysterious creature that, according to local lore, has inhabited the Navidad River bottom for more than 100 years. Inside, Dale, Jean, and Mario wait in silent paranoia while the house shakes with growls and snarls right outside their door. Though the ranch sits on vast acres prime for hunting, Dale has resisted opening up the land. But after the prodding of some of the rifle-loving townsfolk and the loss of his job, he gives in and opens the gate to the compound. Then the hunter becomes the hunted. Made on a shoestring budget with a limited crew, and local non-actors joining the professional ones, Duane Graves and Justin Meeks (who also stars as Dale) have crafted a haunting journey, filled with Texas-sized eeriness and bizarre characters. Less concerned with making a blood-and-guts slasher flick (though it was co-produced by Kim Henkel, creator of the 1974 classic “The Texas Chain Saw Massacre”), Graves and Meeks employ a form of terror that comes from the unknown."

DYSMORPHIA: "Dysmorphia is the story of Isabella: a destitute beauty-addict. After faking cancer to pay for her next cosmetic surgery she is haunted by a shadow figure demanding a penance of flesh. This film takes a terrifying look at a woman's relationship to her body and the horrific behaviors we inherit.

Hi! I'm Amy Geist, Writer/Director of Dysmorphia. The story is rooted in my own twenty year struggle with anorexia and body dysmorphia. On the path to recovery, I saw the gender disparity in body standards. There is an untold narrative of what women put themselves through for acceptance and it’s a cycle that we pass down through generations. Awareness is the first step to breaking that cycle." 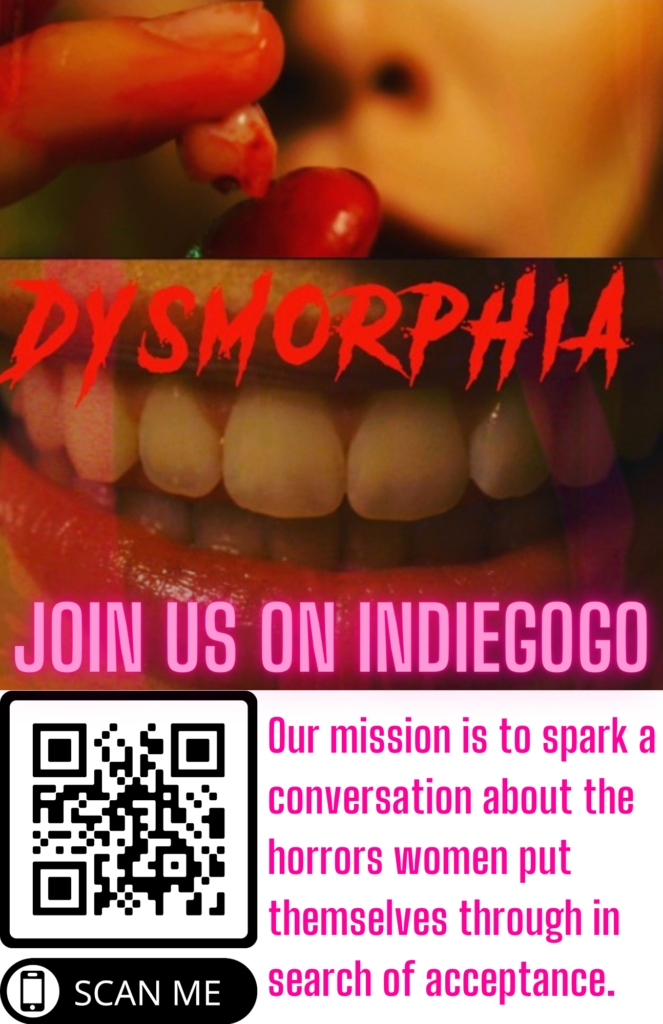 SELF ISOLATED: "A woman awakens from a coma to discover she is one of the few survivors of a global pandemic. With her caretaker husband missing and little recollection of prior events, her search for clues leads her to an unusual neighbor who may have something to hide."