For the holiday-themed horror anthology 13 Slays Till X-Mas, a group of filmmakers came together to deck the halls with carnage and ghoul-tide cheer. One of those filmmakers was Sean Blevins, who directed the segment “Don’t Kill Santa on Christmas,” and while it was his first foray into the world of holiday horrors, Blevins was already well-versed in the realm of anthological filmmaking.

Daily Dead had the opportunity to speak with Blevins about his involvement with 13 Slays Till X-mas, and he chatted about what inspired him to become a filmmaker, his thoughts on anthological horror, what he hoped to create with his segment in 13 Days, “Don’t Kill Santa on Christmas,” and more.

Let’s start off by talking about what inspired you to become a filmmaker. Was there a “light bulb” moment that you had where you realized that it was something you wanted to seriously pursue?

Sean Blevins: I couldn’t nail down the exact moment, but at some point, filmmaking just became an itch I had to keep scratching. As far as inspiration, I’m sorry to say that as a kid of the ‘80s and ‘90s, I have the cliched response of Tarantino. And it wasn’t so much the “hip” part, it was that it felt like he was giving us something new. Pulp Fiction was a smack in the face. At that time, as much as I loved Spielberg’s films, he suddenly felt passé. Tarantino’s talent was in your face, and it made me sit up and realize what a director could do.

However, as my appreciation for filmmaking grew, I started to discover what a genius Spielberg was. It wasn’t as in your face, nor as hip as Tarantino, but his genius was almost like an invisible magic trick to the casual viewer. Total command of the medium. And the link between these two directors is the massive understanding they have of how to work an audience. Those little discoveries are what started to really fire me up, and the more I learn, the deeper it gets its hooks into me as someone who wants to try their hands at magic. Filmmaking really does seem like a magic trick, when all of these little parts come together to make even a single moment that connects with an audience.

You’ve worked on an anthological horror movie before—is there something particularly fun or challenging about that format of storytelling that you really enjoy?

Sean Blevins: It’s really just that the opportunities have fallen into my lap, and I’m really grateful for that. After toying with the short format, I’m extremely interested in finally jumping into the feature format and hopefully trying that at some point in the next couple of years. That is, once I can formulate a script I can get done on my very limited budget. I’m even excited just to be able to fail and learn from it. I think shorts and working within the anthology genre is a great outlet and training ground for experimentation. It’s film school for those of us that weren’t able to go.

How did you get involved with the Volumes of Blood sequel, and can you discuss your experiences working on that project?

Sean Blevins: I had done a video review for the first Volumes of Blood for a site and YouTube channel we had running called House By The Video Store (we’re in the process of re-working and re-branding it now as The Video Zone). We had some short films up on the site, and the one I had directed was our first short that was part of a Horror 48 Hour Film Project competition. Getting to know PJ [Starks], along with him seeing my work on our 48 Hour Horror Short, led him to ask me to be a part of Volumes of Blood 2: Horror Stories. The producers of these anthologies, PJ Starks and Eric Huskisson, are out of Owensboro. Many of the filmmakers are in our region, so that also helped with my chances of being brought on board, as I’m in Louisville and only a couple hours away.  My VOB2 short was a segment that linked with not only another in the sequel, but also connected the first film to the second, so it was pretty restrictive. I was kinda thrown into the fire (by no fault of the producers), as my first location visit was the day we started shooting since the previous one was lost. I was also meeting the crew for the first time as well, but we hit the ground running and I met a lot of really talented people on that project. As far as my approach to that segment, I didn’t feel it had a lot of story or emotional meat, so I just tried to throw as much style at it as possible.

I noticed that for 13 Slays Till X-Mas that many of the same creative partners from Volumes of Blood are involved with the project—was it just a natural evolution of expanding what you guys had already done on VoB into a new anthology that was a bit more ambitious, as it features a handful of more segments and new filmmakers as well?

Sean Blevins: While I’m not a main producer on 13 Slays, it was born out of the financing failure of Devil’s Night: Volumes of Blood 3. Originally, I was in talks to direct the VOB3 wraparound that was going to be roughly a half hour and was to wrap up the VOB anthology. They came to me with a completed script for that one, but were open to re-writes. After a few rounds of re-writes that lined up with something more true to my own taste, we unfortunately decided to split ways as our visions weren’t aligned. There were no hard feelings, but none of us wanted to make something we wouldn’t be happy with. After that, the financing still didn’t come through on VOB3, so they decided to put together a “no-budget” anthology instead of sitting around with nothing to produce. Shortly after they decided to make it, they gave me a call and to see if I was interested.

A close friend, William Capps, and Julie Streble also got to co-write and co-direct a segment, and if I remember correctly, I nudged PJ and Eric a little to get William onto this project, as William and I have been friends for over 20 years. He is a co-founder of HBTVS/The Video Zone, and we basically talk daily about filmmaking and he’s produced several shorts for our site and YouTube channel. Through that site, we also made a friend who is a great filmmaker named Carlos Omar De León out of Minnesota, who we also recommended whenever PJ and Eric were looking for more filmmakers. It was also exciting to see Jed Brian being a part of it because I had met him a couple years back at Days of the Dead Louisville Convention while he was there promoting his film, Unlisted Owner. Whether an anthology film turns out to be good or bad, it’s at the very least really fun for the filmmakers to be a part of something with your friends and fellow filmmakers. And of course, we all want it to be the best it can be for the audience, but this is one way in which directors can tangentially collaborate on a shared project. If anyone is interested in the filmmakers behind 13 Slays, the disc release has a massive collection of behind-the-scenes features. It really is impressive for an indie release of this scale.

How different were your experiences on 13 Slays versus Volumes of Blood 2?

Sean Blevins: Going into Volumes of Blood: Horror Stories (VOB2), I was less experienced and proven (not to say that’s changed a great deal!), so they were gracious enough to give me anything for that film. This time around, I believe they trusted me more after seeing how I worked on set, as well as our experience developing the Volumes of Blood 3 wraparound together, so I was able to write my own script from the ground up. The only parameter I had was having to include a symbol of Christmas, something the other segments had to include as well.  Because I wasn’t shooting in Owensboro this time, I assembled my own team to shoot in Louisville. It was a lot of fun quickly assembling a local crew, and since the limited budget was all going on the screen (and in everyone’s bellies), it was all volunteer work. There were a few people on this project I’ve worked with before, but for the most part it was a lot of new faces that I’m very thankful to have met, and that they offered their talents in helping us pull off something I’m proud of.

Can you tell us a bit about your segment “Don’t Kill Santa on Christmas” and what we can expect from it? And have you always loved holiday horror movies (they’re probably my second favorite sub-genre myself)?

Sean Blevins: I had to include Christmas garland within my 13 Slays segment, so instead of it being just a decoration in the background, I integrated it specifically into the story in a way that I hadn’t quite seen before. And although this is a minor spoiler, my basic approach was, “What if someone like Harry and Marv (from Home Alone) broke into someone’s house to commit a murder?” The first line of dialog in my segment is, “Didn’t your granny ever tell ya, the most dangerous thing you can do on Christmas is to fuck off Santa?” The line goes by fast, so some might not pick up on it, but it’s a warning of things to come if they commit this “sin.”

Christmas can be a hard time of year for many people, and one of the characters in my segment is still dealing with the aftereffects of a tragedy and his loneliness on Christmas. I hope by the end of it, some viewers will find some form of spiritual comfort to the conclusion. I also tried to lay in a bit of humor and carnage as well because the film is called 13 Slays of Christmas, after all. My number one goal was to give the audience what they paid for, while hopefully offering a little more than they expected by the end of it. 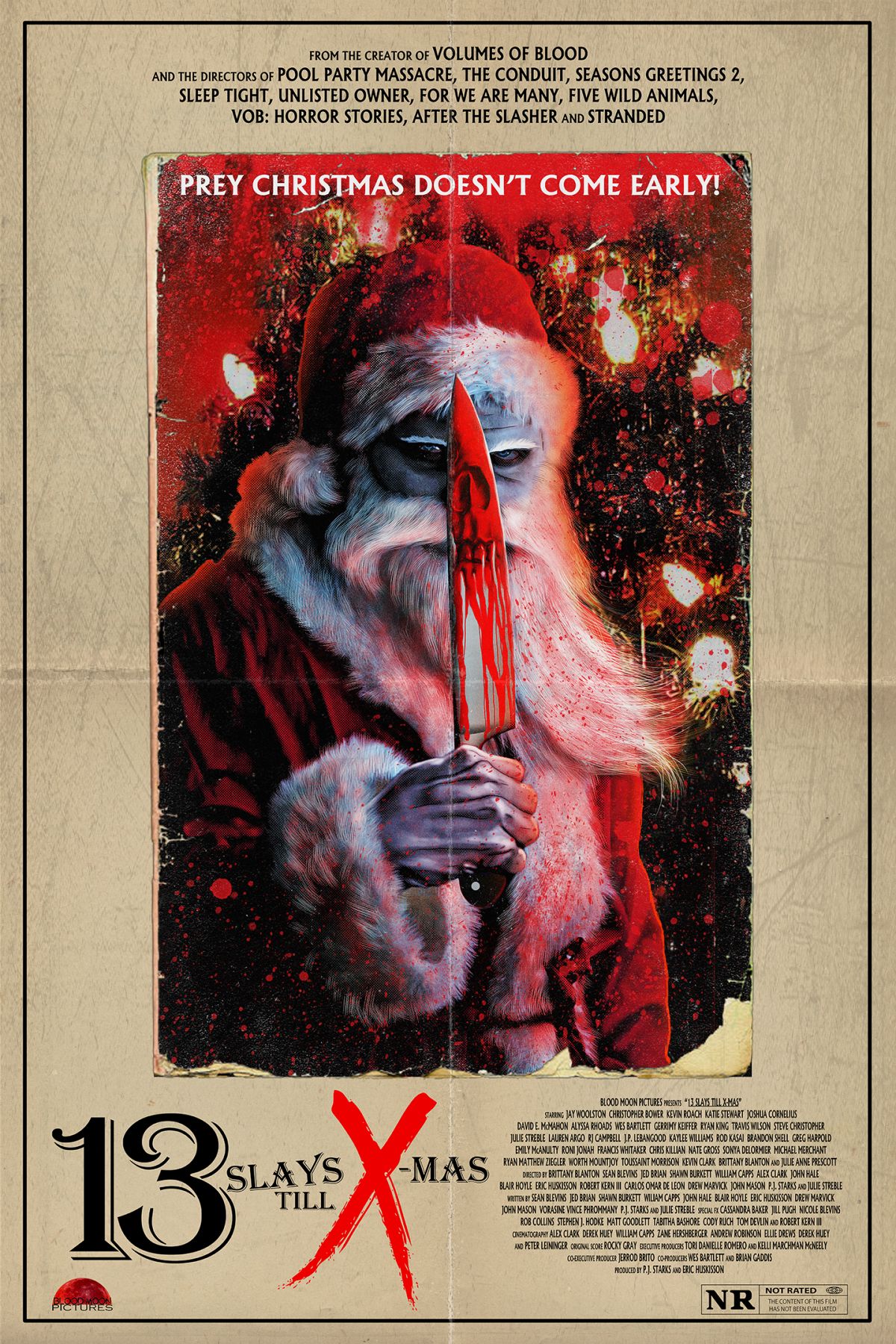