I ran across the work of artist Cody Schibi last year during several of the tweet alongs that usually break out during the live airings of The Last Drive-In on Shudder and was immediately drawn to his imaginative work that was filled with so much personality and a horrifying sense of whimsy as well. Schibi will be back to his old tricks when The Last Drive-In returns later this month, but in the meantime, here’s a Q&A to help you get to know this talented artist who is clearly passionate about horror and art—two of my very favorite things.

For more information on Schibi’s work, be sure to check out his online store HERE or tune in to Cody’s Twitch stream which happens four times a week at: twitch.tv/codyschibi.

Was there a point in your life where you realized you had these creative inclinations & did you always know it would lead to creating these amazing works of art?

Cody Schibi: There’s one standout  moment when I was a little kid (maybe six-ish?) when creating art just “clicked” for me. My mom would draw these outlines of characters for my brothers and I, and we’d fill in all the details/features/etc. I distinctly remember her outlining a Frankenstein monster and I had the greatest time of my life adding the eyes, stitches, ragged clothes... all of it. Even though I felt that passion for art then, I had no idea that it would lead me into freelance illustration. I just always knew that I LOVED drawing things. It’s been just a spontaneous series of events and opportunities that have continued me on this path.

What was it about the horror genre that you found particularly inspiring where you wanted to incorporate that into your art?

Cody Schibi: I have always been a fan of horror. It’s this magical genre that consumes me and makes me feel every emotion. Going back to my parents, they’d allow my twin brother and I to rent whatever movies we wanted, and when we scoured the aisles of our local video store, the VHS covers of the horror section spoke to us. Just those images, and collecting/looking through Fangoria obsessively, directed what I truly enjoyed to draw. Creating horror-themed art has, and will always, make me ridiculously happy. There’s a comical element to it that a lot of people miss and simply brush off as “disgusting” or “there’s something wrong with you for drawing that!” And even though they’re probably right, it continues to entertain me and make me laugh.

If you had to try and describe your artistic aesthetic, what would you say?

Cody Schibi: Someone once called my art “gracefully grotesque,” and that's a description that has stuck with me. When creating pieces of art, especially horror themed, I usually try to make the person looking at it find some kind of beauty, or even humor, in it. I mean, it’s challenging & sometimes impossible if you’re drawing a scene from Bloodsucking Freaks or just a gore-filled image, but I do try to have the viewer’s eyeballs at least appreciate the piece or work put into it. I approach everything I do with humor as well and I think, or hope, it translates in my art.

Your style seems to lean into these animated and textured creations (hopefully I’m saying it right) that really give your work a sense of personality to them. Is that reflective of the types of art that you typically enjoy yourself?

Cody Schibi: I would absolutely say so! As I mentioned, I consumed Fangoria magazine as a kid and I truly wanted to be a special FX artist for a while. Studying effects and masks and how FX wizards created their masterpieces definitely inspired (and continues to inspire) my own art. Illustration-wise, I was always obsessed with the super detailed artists whom I’d study & could stare at for hours. Artists like Bernie Wrightson, R. Crumb, Moebius, Geof Darrow, Frank Quitely, Aaron Horkey, and Alex Pardee - they are ALL masters of linework and influenced my style. Their work is so organic and alive, and I try to give all my art that sense of movement and personality to them as well. I’m in love with SO MANY different artists that aren’t big into detail, even abstract artists that influenced me greatly, but those are definitely not as obvious in my work.

Many of your pieces involve films/ideas from The Last Drive-In; was there a reason that show inspired you to create that artwork and how has that community embraced your artwork online?

Cody Schibi: Like most of us horror fans, I watched Joe Bob back in the day and have always loved his approach to horror films. When he popped up on Shudder, I was so excited. And after that first marathon they did, there was this obvious energy and electricity throughout the horror community. When they launched the first season of The Last Drive-In and kicked it off with C.H.U.D., I shared a little painting I did of a C.H.U.D. on Twitter and the whole The Last Drive-In community overwhelmingly liked/shared/commented on that tweet.

That instance sparked an idea and before the second film was shown, which was Castle Freak that opening night, I created “The Last Draw-In” where I intended to create a piece of art LIVE on Twitter during whatever film they would show (within the timeframe of that film). It’s been a wild ride and the Friday nights when the show is on have been a wonderful, artistic exercise of, “Oh shit! The movie is almost over, I NEED TO FINISH THIS!” But it’s been so fun and fulfilling.

I haven’t missed a single film of theirs, and with season three starting on April 16th, I’ll be on Twitter every Friday night, sharing the process shots from sketch, ink, to finished paints, while enjoying the absolutely amazing community there during the screenings - which answers your other question. The Last Drive-In community is so supportive of the art I create and I’ve formed some great friendships from this. There are a lot of outstanding artists who have joined in on #TheLastDrawIn & whose works inspire the hell out of me to work harder & become better at what I do.

What’s been the biggest challenge for you as an artist trying to carve out your place in the online marketplace?

Cody Schibi: The biggest challenge for me is continuously creating content. I think all artists, in all fields, have this worry of relevance. Even though it’s a natural instinct and need, we must keep creating and offer new art and ideas, not only for ourselves, but with the hopes that it will connect with other people. That’s a massive challenge that’s always in the back of my mind. The online marketplace is overflowing with truly wonderful, talented artists and it’s extremely easy to disappear in that awesome sea of art. You just have to keep paddling and moving forward.

Do you have any pieces that are favorites of yours?

Cody Schibi: I do! All my favorite pieces are of favorite films of mine, or original ideas that weren’t forced at all. Some specific film pieces which have been my favorites are a Trick ’r Treat poster I designed back in 2012, the DVD cover art for the Australian release of Cannibal! The Musical, a John Carpenter tribute illustration and a Creature from the Black Lagoon commission a few years back. My favorite original pieces keep changing, but a few of my watercolor/ink “Halloween Tricksters” are in there and a few pieces I’ve created for some past gallery shows, too.

Are there characters or actors that you haven’t had a chance to celebrate with your art just yet that you’re planning to do or want to do in the future?

Cody Schibi: That list is never-ending for me. I look forward to creating 18 more pieces/characters from whatever films are shown during The Last Drive-In Season 3, but more specifically, I’m currently illustrating all the super rad characters from Psycho Goreman, which is a film I’ve completely fallen in love with. I’d honestly love to work with any and all film peeps, and will just keep cranking out my own fan art solely for my love of horror! 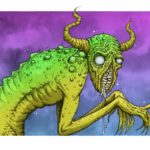 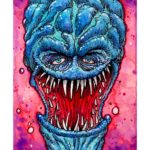 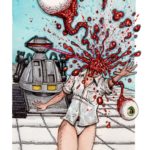 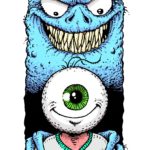 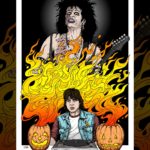 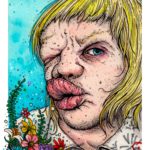 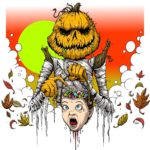 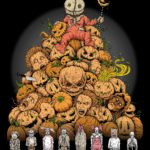 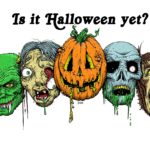 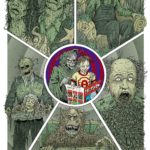