This Friday, April 29th, IFC Midnight is releasing Hanna Bergholm’s Hatching, a wildly ambitious creature feature centered around the horrors of adolescence, into theaters (it will make its debut on digital platforms on May 17th). In the film, a young girl named Tinja (Siiri Solalinna) decides to take care of a mysterious egg she finds one night, raising the twisted monstrosity in secret. Tinja’s best efforts to care for her new friend—whom she names Alli—prove to not be enough once the animal begins to wreak havoc on her life, leaving the young girl unable to contend with Alli’s increasingly dangerous behaviors.

Recently, Daily Dead had the opportunity to speak with Gustav Hoegen, the animatronic designer and creature FX supervisor behind Alli about his experiences working on Hatching and collaborating with Bergholm on the project. Hoegen discussed how he approached the creation of Alli, the challenges that he and his crew faced during production, and more.

Great to speak with you today, Gustav. I know when you're working in animatronics, it's not exactly the same as doing prosthetics and more traditional makeup. I'm just curious, at the start of your career, was there something about going into animatronics that just spoke to you in terms of what motivated you as an artist? Was there just something about it that you knew this was something that you wanted to pursue in terms of your creative direction and things like that?

Gustav Hoegen: Well, not necessarily, believe it or not, animatronics, but definitely being a creative behind the scenes. I didn't quite pinpoint exactly which trade I would choose, but I knew from the age of six that I wanted to do behind-the-scenes work, particularly special effects, models, even design, arts, artwork, et cetera, or art direction, anything. Anything behind the scenes that was created. But it was only through actually working in the industry, which I never imagined that I would be drawn towards engineering because my interest was more aesthetics, the look of things, the design. I'm still very fascinated by it. But what I found out was that animatronics gave you a certain amount of freedom that, I felt, the other traits, I might be stepping on some toes because everybody puts their own flair into their work, but I felt I really wanted to design things and make it my own.

So, it was only a few years into my career that I started to drift towards animatronics and really started to enjoy it and slowly started to build a reputation for it. Now, this is pretty much all I do. And since setting up my own company, I also take care of all the other stuff, not personally, but I do hire people to do the sculpting, painting, et cetera, and oversee other types of projects.

So, was it being able to have this opportunity to create characters that motivated you then? Because I think it's interesting that, in animatronics, most of the time it involves creating characters, which is the reason a lot of us end up falling in love with movies in the first place. It’s these characters that we latch onto and connect to as movie lovers.

Gustav Hoegen: Well, that's definitely a big part of it. Part of it is also the hunger for glory a bit, too, because if you get allocated a character, you get the opportunity to breathe life into it, like Alli, for example. Or Admiral Raddus. You do feel you are a very big part of bringing that to the screen. Initially, that was never my intention. I was just so taken with the process of making something or creating something real. It came later that I realized that you're actually creating something that acts in a movie. So that's a bit of a cherry on the pie if you know what I mean.

Coming into Hatching, was there something in particular about Alli that you were really excited to tackle when you were first approached for it and realized what Hanna was looking for as you were getting started?

Gustav Hoegen: Absolutely. And it might sound a bit shallow from my side, but when I saw the drawings and just the contorted look of Alli, I said, "Oh my God, this could make a really interesting creature." Also, movement-wise and look-wise, I thought, "Oh, this is totally up my street." And then, I started exploring the story behind it, how it's sort of representing the inner turmoil of a young girl. I almost compare it to a version of The Picture of Dorian Gray by Oscar Wilde, where this person's wretched soul is starting to come alive in a painting. I thought it was such a beautiful metaphor, and I saw a bit of that in The Hatching. The story behind Hatching really spoke to me as well. But the initial spark for me was just to look at the creature and its possibilities. I could imagine it already there in front of me and how it was going to move, how it was going to look.

And, also to that, Hanna, with her short experience in making films with puppets, she's done one more apart from Hatching called Puppet Masters and that was more an actual puppet, so to speak. But her knowledge about the subject was almost like you're dealing with somebody who was very clued up on how to realize it. We were very much on the same wavelength, so it was a real no-brainer for me to do it. And I was happy and flattered that she chose me.

You mentioned that coming into this there were these drawings. In terms of your own creative process, were there any changes or things that had to be adapted from Hanna's original vision to what we have on the screen in terms of making sure that it could work for this project as you were making this character into a reality?

Gustav Hoegen: Well, there was a lot of back-and-forth, but we never strayed from the original concept. We actually stuck so closely to it that I took the drawing she sent me, blew it up on paper as a size reference, and we basically copied the drawing into a clay sculpt. And also, what was very liberating is the method we chose with how to bring it to life, which is that we were able to externally puppeteer Alli. There are no internal mechanisms apart from the head, of course, which meant we could stick to the overall look of the creature as portrayed in the artwork, which was very skinny with spindly legs, without having to worry about any technical difficulties since it was externally puppeteered. So yeah, we hardly ever drifted from the original concept. Where we did start to deliberate were the feathers, the skin, the texture of the tongue, all these little details. But the overall things never really changed that much.

I'm glad you mentioned the details because there are so many little things to this that I really loved about the design of Alli, where there are these transitionary areas from the hair to the feathers and the teeth even, too. Because of all these intricacies, were there any challenges that you guys faced in terms of creating this puppet and then ultimately trying to make sure it would work in-camera? Especially since most of this movie is shot in very high light, so you're not really able to hide it in the shadows or anything.

Gustav Hoegen: You're very right. That was quite scary. When it slowly dawned on me that the whole light setting of this film was all about bright light, which is a really great idea instead of making it all dark and creepy, but that obviously gave me a lot of problems. There's nowhere to hide. In a lot of creature films, they can hide in the shadows and you just see an outline, for example. So yeah, that was definitely scary and that did pose a big challenge and it gave me a lot of sleepless nights as well.

Obviously, the other big challenge is how to bring Alli to life. I'll be honest, the cosmetics and the sculpting, that was all pretty smooth, because everybody who came in, they did their job very well. But bringing Alli to life convincingly, you're still dealing with a puppet that's as big as a 12-year-old girl, so our priority was to keep it light so that the performers could focus on the performance and not on keeping the puppet upright. Everything we built was focused on keeping it light. On the set, we did a lot of rehearsing and we ended up making so many external rigs. We even suspended the puppet from the rafters with bungees to relieve the weight so they could really focus on the performance. So, I'd say the performance side of that was probably technically the biggest challenge for us, by far.

Go HERE to catch up on all of our Indie Horror Month 2022 features!

[Photo Credit: Photos above and below courtesy of IFC Midnight.] 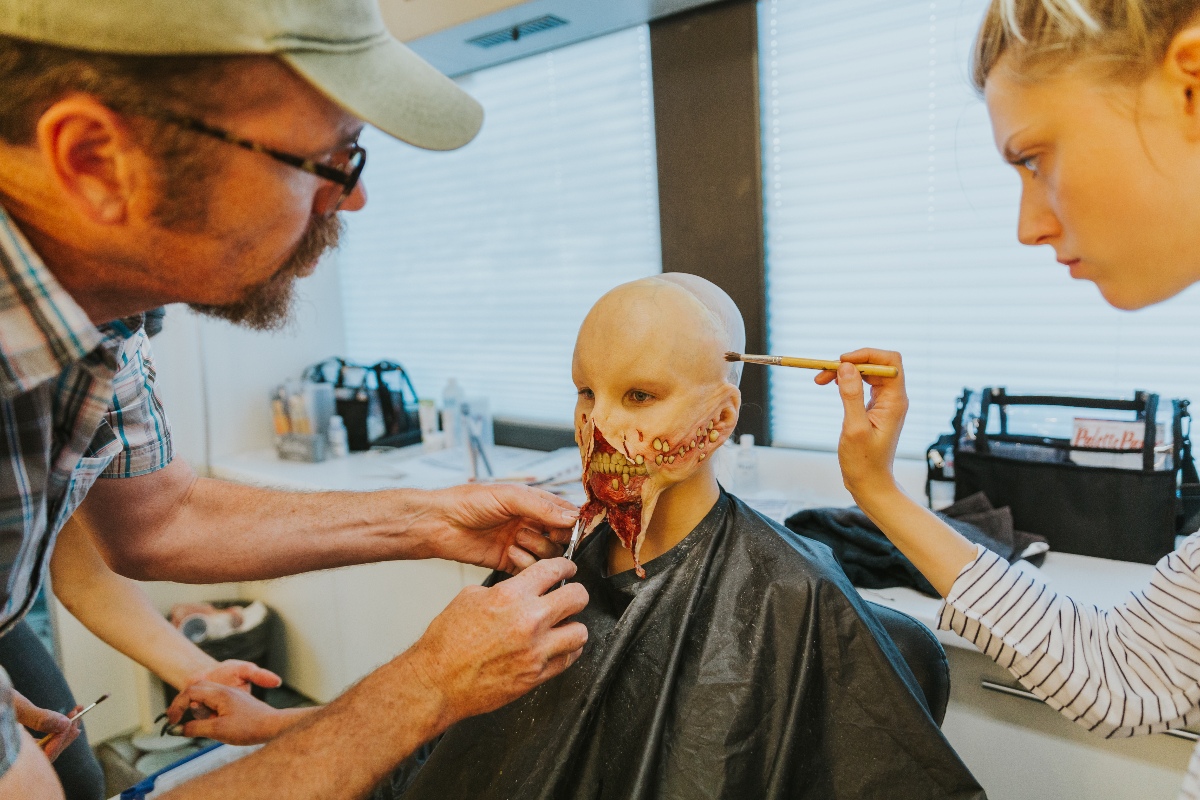 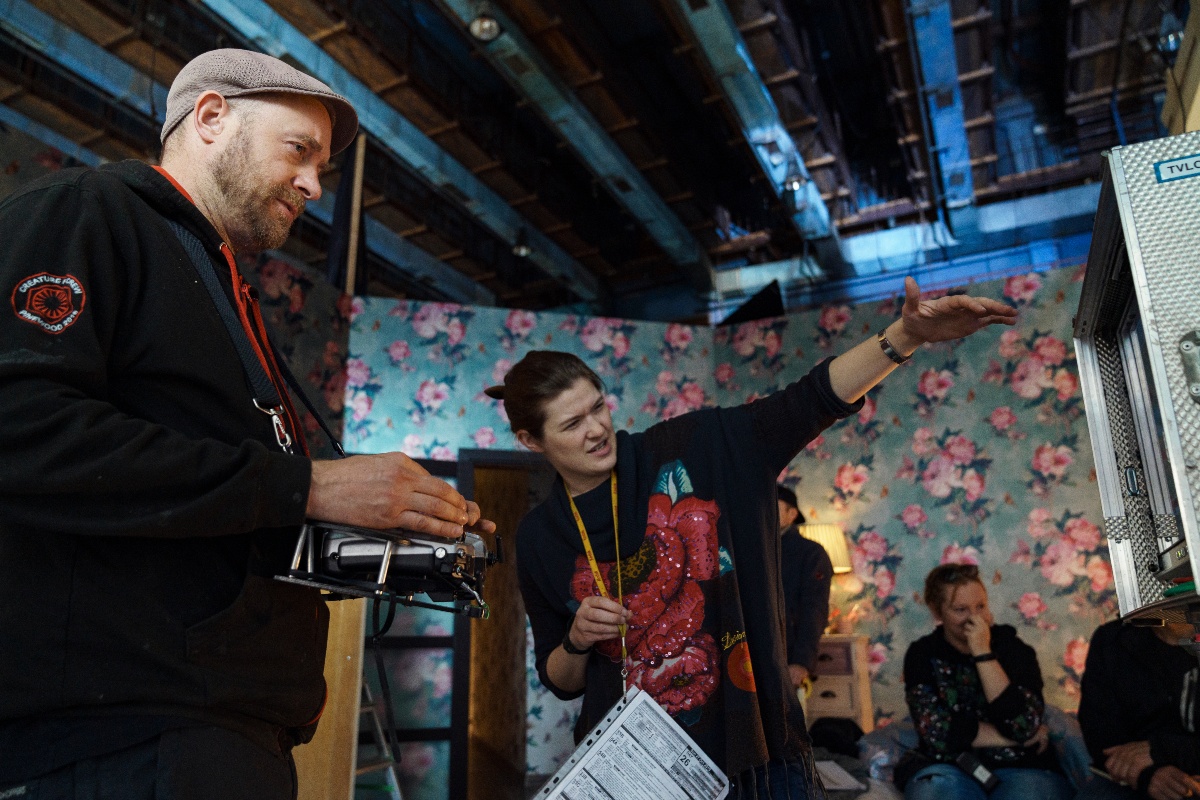 Alli the puppet under the bed. 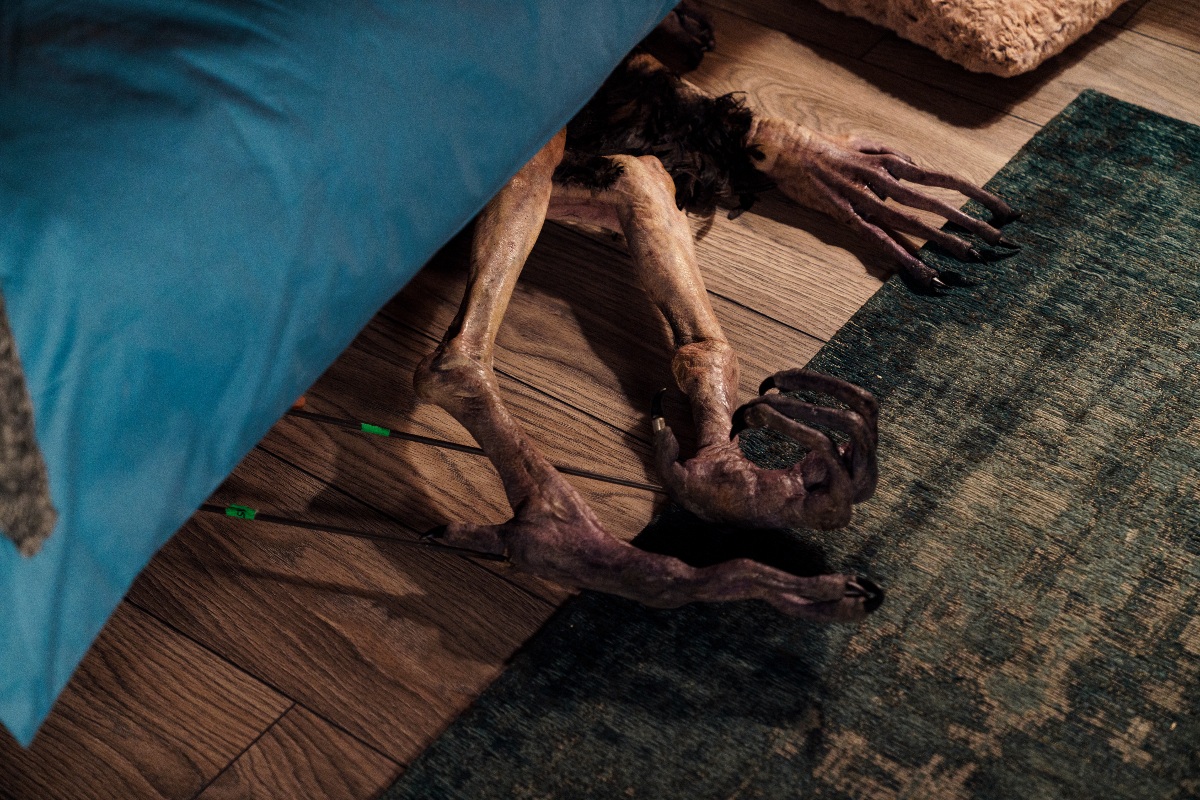 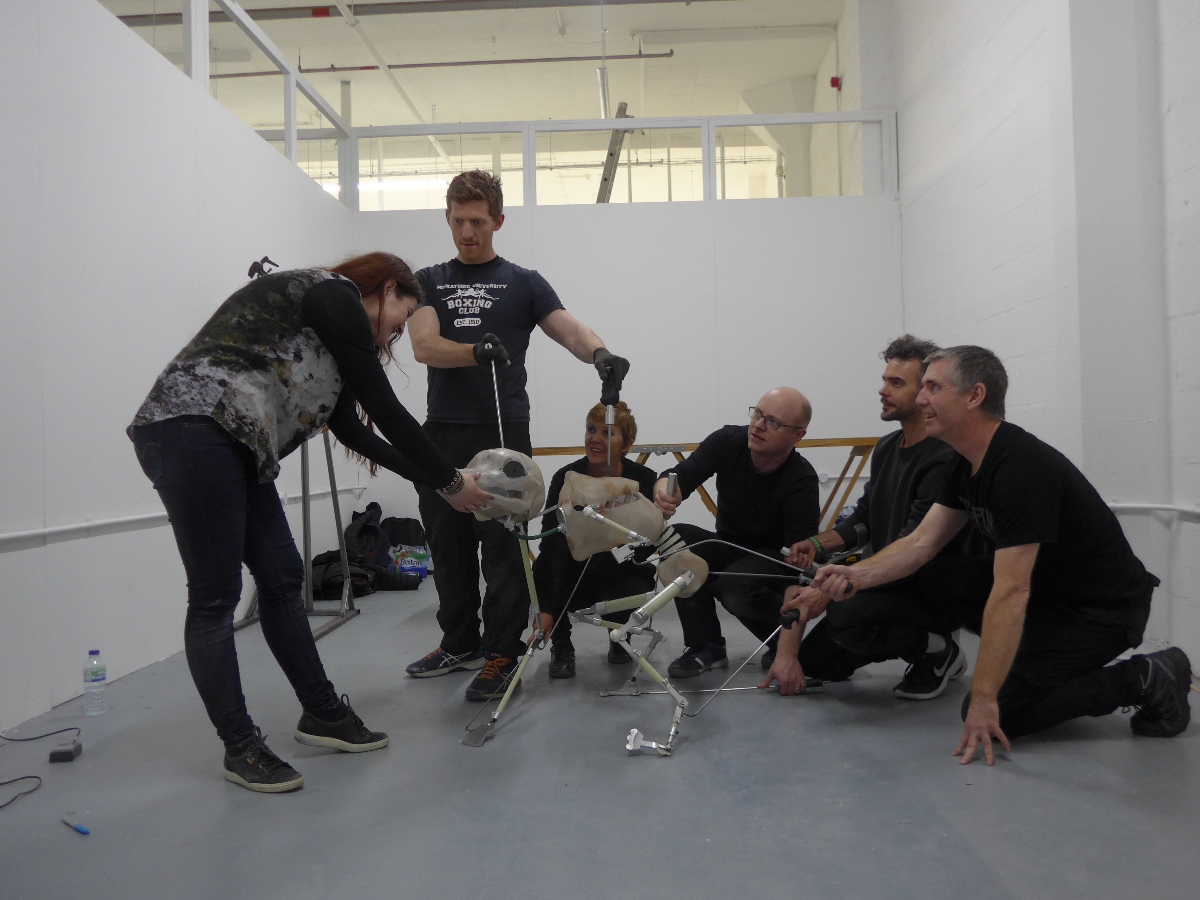 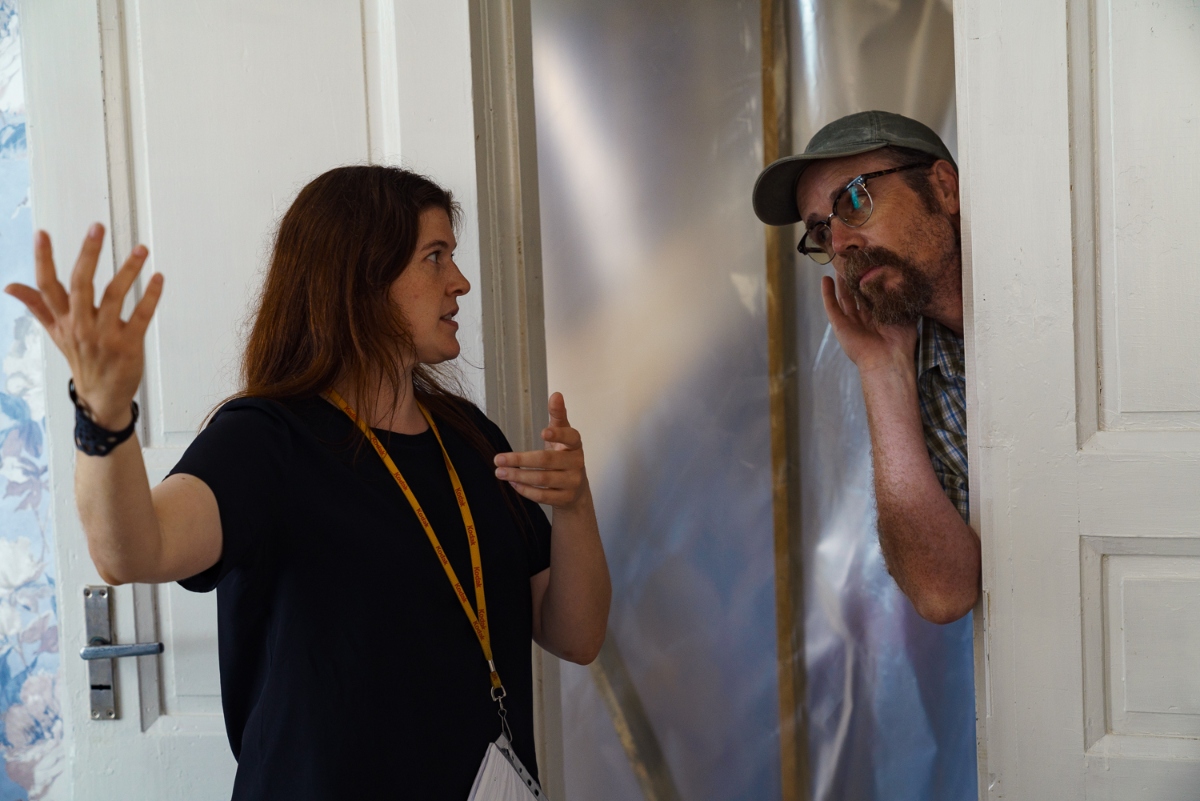