Indie Horror Month 2022 Q&A: Author Vaughn A. Jackson Discusses His New Horror Novel TOUCHED BY SHADOWS and His Kaiju Thriller UP FROM THE DEEP

A psychokinetic 13-year-old escapes an experimental laboratory only to find herself stranded in a small town with sinister intentions in Vaughn A. Jackson's new horror novel, Touched by Shadows. With Touched by Shadows now available from JournalStone, Daily Dead was honored to catch up with Jackson in a new Indie Horror Month Q&A feature, in which Jackson discusses the origin of Touched by Shadows, the eclectic inspirations behind his new novel, working with the amazing team at JournalStone, and he also discusses his deep sea kaiju thriller Up from the Deep (now available from Severed Press)!

You can read the full Q&A with Vaughn A. Jackson below, and to learn more about Touched by Shadows and Up from the Deep, visit JournalStone and Severed Press!

Thanks for taking the time to answer questions for us, Vaughn, and congratulations on the recent publication of your new novel, Touched by Shadows, now available from JournalStone! When did you first come up with the idea for Touched by Shadows?

Vaughn A. Jackson: Hi there! Thanks for reaching out for the interview. I always love talking about this stuff, so it got me pretty excited. As far as when I came up with the idea for Touched by Shadows, it was way back in 2015 (you know, about a century ago) when I was still in college. The story itself actually came to me more or less in a nightmare that, upon waking up at like 2 AM, I still remembered vividly enough to scrawl in my notes app on my phone before passing out again.

I didn’t actually do much with it until later in the year when things going on in the world pushed me to really find an outlet for growing frustrations and concerns. Which gave birth to the first, very angry, draft of the novella that was originally titled “Transmundane”...yeah, I don’t know why it was named that either.

Approximately how long did it take you to write Touched by Shadows, and how many drafts did you go through before it was sent to the printers?

Vaughn A. Jackson: A while, and a lot. I started the story six years ago, and it didn’t get sent off for submission until late 2020, if memory serves. In that time the story grew from what was originally a 28K novella, to a 50K novel with a bunch of characters cut and a few added, and then I took a butcher knife to it again to streamline everything and flesh it out and ta-da, it was alive! All-in-all, it probably ended up being somewhere around seven versions, three of which were basically complete rewrites of the story.

Vaughn A. Jackson: JournalStone has been nothing but fantastic. Shoutout to Scarlett Algee for being super patient with a nervous, impatient, neophyte author who definitely sent more emails than he probably needed to. I really appreciate their help and communication in guiding me through the steps of getting my first book ready for publishing. Not only that, but the work they do (or get done) is simply put, excellent. Every time something came back, from the edits, to the cover, to the final draft were just about perfect first try. Only needed a few tweaks here and there.

Vaughn A. Jackson: Pretty sure I was drinking with some friends and almost broke down into tears. Which I can admit, it was an emotional moment. Honestly, I was ecstatic. I had given a pretty detailed idea of what I wanted for the cover, and when it came back it was exactly how I had envisioned it in my head.

While writing Touched by Shadows, were you influenced or inspired by any other books, movies, TV shows, comic books, or video games?

Vaughn A. Jackson: Oh yeah! I think I’m the kind of writer who wears my inspirations and influences on my sleeve. To name a few, Stranger Things, Stephen King’s IT and Firestarter, To Kill A Mockingbird, Victor LaValle’s The Ballad of Black Tom, Hellblazer…I could probably go on, but these are the big hitters as far as inspiration. Oh, and Pokemon: The First Movie. I’ll explain that in the next question’s answer…

But, honestly, most of my inspiration actually shows up more in how I write, which people have told me is “cinematic,” which has also become how I describe my books. So I’m often inspired by the visual storytelling aspect of movies and work to incorporate that as best as possible into my writing. I want readers to feel like they are watching a movie when they read my books.

Ultimately, what do you hope readers take away from Touched by Shadows?

Vaughn A. Jackson: “I see now that the circumstances of one's birth are irrelevant. It is what you do with the gift of life that determines who you are.” - Mewtwo

Yeah, like I said, Pokemon: The First Movie. I think honestly, that is one of the biggest takeaways from the book. The world doesn’t define you; you do. If you let yourself become a monster, it’s not the world’s fault or anyone else’s, it’s yours. A lot of the villains in Touched by Shadows blame other people (or other kinds of people) for their own failings and that’s…just not how things should work.

The other takeaway is that kindness can make or break a person. So be kind…or the psychic girl will break your kneecaps.

Your deep sea kaiju thriller Up from the Deep was published in 2021 by Severed Press. What did you enjoy the most about writing that novel and adding your own unique take to the kaiju genre?

Vaughn A. Jackson: Not going to lie, you kind of answered my question for me: I really loved being able to add my own unique take to the kaiju genre. I’ve been wanting to write my own Godzilla or Ultraman story since I was a kid, and so I sat down and decided to try my hand at it. What came out was something that is, in my opinion, a loving tribute to something that I grew up loving.

Coming up with the kaiju Inkanyamba and Vornax was a whole lot of fun too, because I basically sat around for a week playing Dr. Frankenstein in my head, stitching and unstitching different features from the different animals to make something cool.

And lastly, there was no pressure. At all. Everyone knows that kaiju often leans into camp and a fairly over-the-top nature, so I could just about do whatever with no concerns on genre constraints other than “keep it interesting, and have a big monster.”

I realized that was three things I enjoyed. Oops.

Vaughn A. Jackson: My writing routine is constantly begging me for some form of stability, but that is what headphones are for! In general, when I’m working on a project I write for somewhere around two hours. Once I finish a project, I take a break of indeterminate length, which is the part I really need to get better at. While I don’t necessarily set out to meet a word count, I consider anything over 1000 words a good writing day.

Vaughn A. Jackson: Do whatever you want. Don’t worry about what’s marketable or if your story is too weird or out there. It’s your story, tell it how you want. People can tell when an author is passionate about their work, and that draws them in. So write what you love.

Oh, and sometimes the best solution when you’ve written yourself into an overly complicated corner, is just the simplest one.

Vaughn A. Jackson: Funny you should ask, because I am indeed. I currently have three little goblins running around on my hard drive. The first is a Civil War-era vampire hunter/revenge story. It’s due for a revisit. The second is a sword and sorcery novel which is in the process of being shopped around. And then I’m currently working on an occult detective novel.

I’d say more, but I would just word vomit everything about them and well, I want people to find out when they read!

As far as where to keep up to date with my work: @blaximillion on Twitter is probably the best place. I try to be rather active there, even if it’s just brain drippings, but there will always be posts about and links to my works as they come about!

Thank you so much for your time, Vaughn!

Vaughn A. Jackson: Again, thank you! This was a lot of fun.

Go HERE to catch up on all of our Indie Horror Month 2022 features, and to learn more about Touched by Shadows and Up from the Deep, visit JournalStone and Severed Press!

Touched by Shadows synopsis: "An experiment gone wrong overloads thirteen year-old Oumou’s psychokinetic abilities and strands her in the tiny town of Archwood, North Carolina. Free from the dismal research lab that has been her home as long as she can remember, she is taken in by a kind family, and finds in their daughter, Amanda, something she’s never had: a friend. For the first time, she feels happy.

However, she quickly realizes that things are not as perfect as they seem…

The local reverend and his followers begin to single her out, and violently conspire against her.

Memories she’d long forgotten come back to haunt her.

A shadowy figure with no eyes stalks the darkness and wants to claim her for its own dark designs.

As these forces work to break Oumou down, her only points of solace are her new friend, and a bitter reporter with a strange ability of his own. They’ll have to fight together to stave off the encroaching darkness both of, and out of, this world." 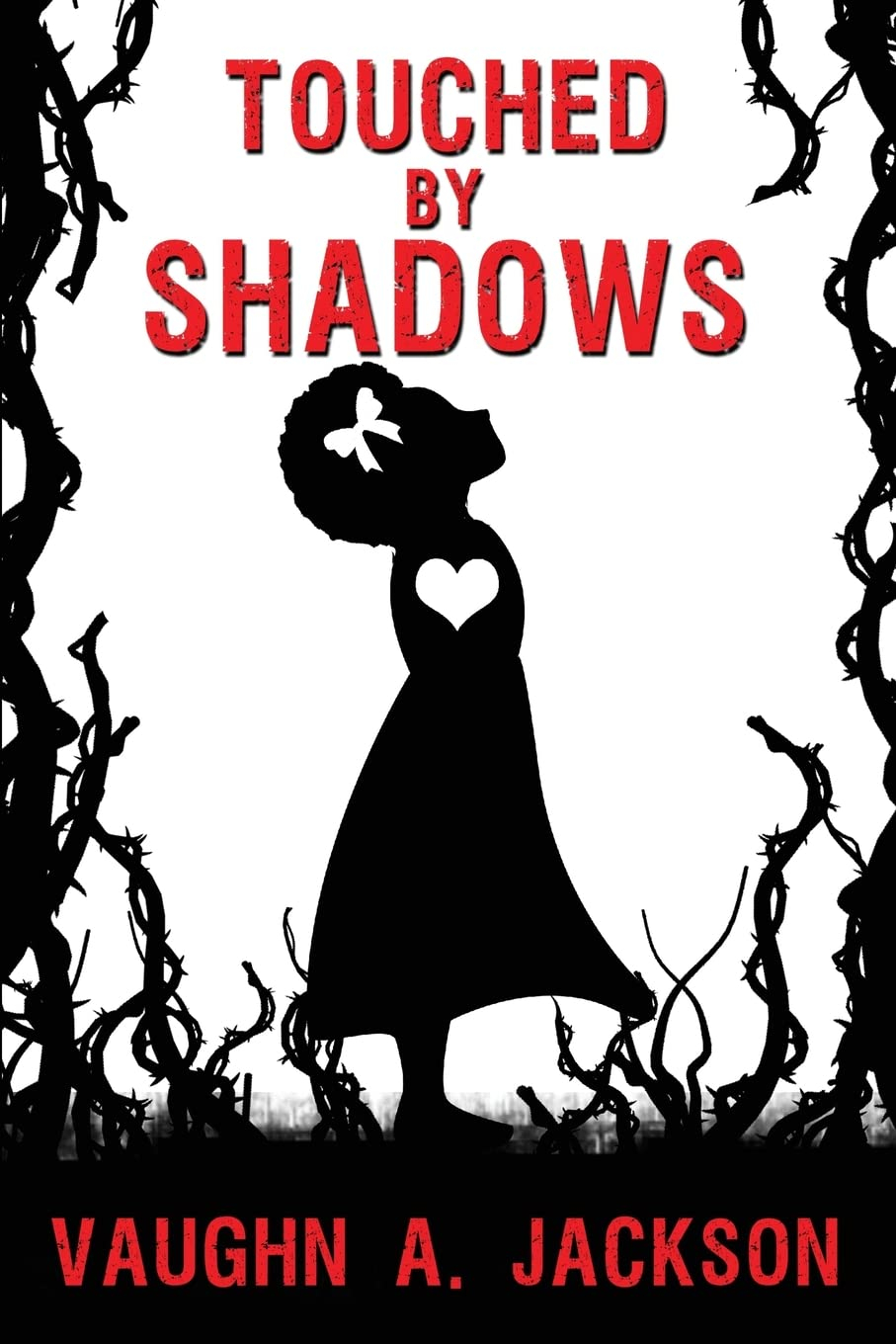 Up from the Deep synopsis: "When detective Raymond Dehane’s covert operation goes awry, it awakens an ancient creature from its slumber deep in the Mariana Trench. Kaiju groupies Devonte Rhodes and Dr. Skylar O’Hara must work with him and the military to find a way to stop its reign of terror. Caught between fascination and horror as they witness the creature’s destructive power, the three work tirelessly to find a means of protecting what they love, even if it means killing this entirely new species. Meanwhile, in the shadows, members of the criminal organization TEMPEST believe the monster is their ticket to conquering the world. And they won’t rest until its power is in their grasp. With threats both colossal and insidious closing in on them, this motley gang of heroes will have a beast of a time coming out on top." 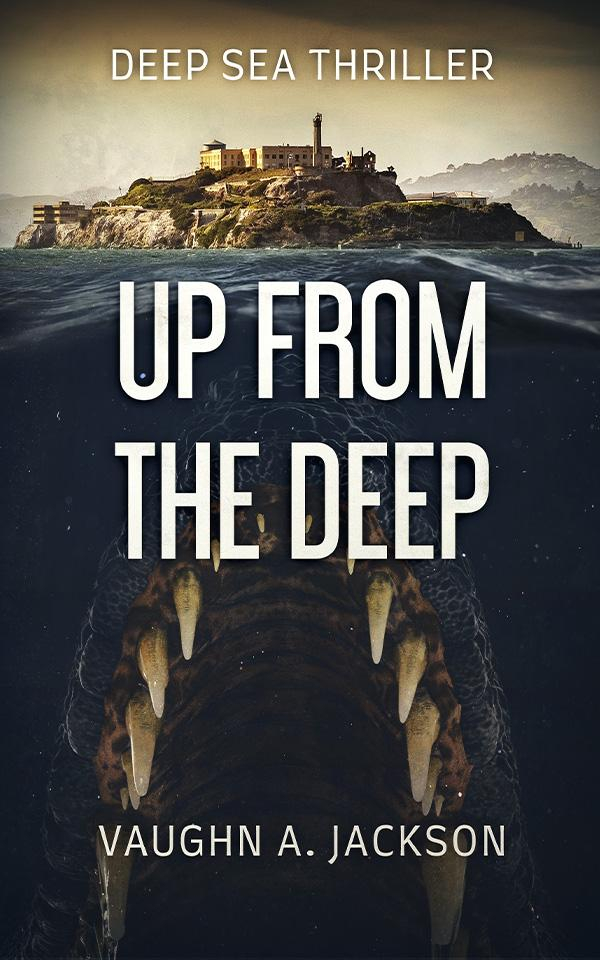