Interview: Jeremy Ray Taylor Talks ARE YOU AFRAID OF THE DARK?

2019's Are You Afraid of the Dark? limited series was a great treat for horror fans of all ages. If you haven't had a chance to check it out, I highly recommend it and, in support of its release to DVD this week, I had a chance to talk with one of the limited series' stars, Jeremy Ray Taylor. Continue reading to learn about his experience on the series, his new love of horror movies, and more:

Can you start by telling me a little bit about how you got involved in this project? Coming off of IT and the Goosebumps sequel, why was this something you were interested in doing?

Jeremy Ray Taylor: I built a reputation for horror, I love the horror genre, and Nickelodeon's always been close to my heart. I love Avatar and everything they've done, and some of my family members have watched the original Are You Afraid of the Dark?, so it just seemed like something that was perfect for me.

I certainly remember watching the original series. My siblings were a little bit younger and they were absolutely terrified of this show, so I have great memories of watching it and am glad to see it rebooted with so much love and care.

Did you go back and watch any of the original episodes for reference, or were you given any reference points in terms of how to play your character or what to expect from the series?

Jeremy Ray Taylor: BenDavid Grabinski, the writer, wanted an all-new character for Graham. So we kind of just took that from scratch, but I did go back and watch a few episodes, especially the pool one where the kids get dragged under water... it terrified me.

Your character and the Midnight Society are big horror fans. Would you say that you've always been into horror movies or has it sort of evolved as you started starring in more horror movies?

Jeremy Ray Taylor: Before IT, I was very scared of horror movies. I was 11 years old, so it was hard not to be afraid of those things. But after I got to learn [what went on] behind the scenes and see that it was fake, it opened the flood gates of this genre for me, and now I love horror movies.

What would you say is the first horror movie that you can remember? What was it that scared you when you started watching them?

Jeremy Ray Taylor: It was [actually] Creepypasta that has scared me since the beginning of time. That was the first kind of horror I ever saw and after that, I didn't have the guts to watch a horror movie. It's all fine in the daytime and then you go to bed and then... it's terrifying.

And, then after IT, you really got into horror movies. What are some of the movies you really like?

Jeremy Ray Taylor: Hereditary was one of them that I loved. I know that's a giant step out from not being able to watch anything [previously], but Hereditary was really cool. And I know The Purge movies might not be considered horror movies by everyone, but I really got into those as well. And I love watching horror shorts.

What was your experience like working with the cast and creators of the new Are You Afraid of the Dark?

Jeremy Ray Taylor: It was wonderful and the dynamic was great. Working with the four other kids was really awesome, and we all got along really well. And me and BenDavid Grabinski had a really good thing going. We bounced off each other and we'd throw suggestions at each other. It was a beautiful relationship. The director was amazing and so was the whole Nickelodeon crew, so it was a great experience.

What would you say are some of your favorite behind-the-scenes memories from working on the series?

Jeremy Ray Taylor: We went on a lot of trips. We were in Vancouver, which I'm pretty sure was almost everyone's first time being there. So we would take bikes around the city, exploring Vancouver. We just instantly bonded and we'd go bowling with the whole team. The director would come and then we'd go to dinner all the time. And surprisingly, one of our best hangout spots was the gym.

At this point, you've faced Pennywise, Slappy, and Mr. Tophat. Do you feel like you're able to take any supernatural encounter that comes your way in real life? Or would you be running in the opposite direction?

Jeremy Ray Taylor: I definitely think that if this happened in real life, I would be running, but if I got cornered, I have enough knowledge to survive. We'll see when that happens...

I know a lot of projects have been pushed back due to COVID-19, but do you have anything coming up that you can share with our readers?

Jeremy Ray Taylor: Nothing in the horror realm necessarily yet, but I just started my own production company. I finished my first short film as a director and co-writer, and I have a lot of horror movie ideas, so if this production company goes where I want it to go, I would love to start writing and then directing some horror.

And of course, I have to ask... have you heard anything about a second season of Are you Afraid of the Dark? And would you be interested in returning?

Jeremy Ray Taylor: I would love to do a second season, but sadly, I'm just as in the dark as everyone. I know Nickelodeon has teased a little bit, but I know just as much as you guys, I promise.

"Re-imagined for a new generation, Nickelodeon’s all-new version of ‘90’s kids’ cult classic Are You Afraid of the Dark? arrives on DVD Tuesday, August 11, 2020 from Paramount Home Entertainment and Nickelodeon Home Entertainment. The three-part limited series follows members of an entirely new Midnight Society, who tell a terrifying tale of the Carnival of Doom and its evil ringmaster Mr. Top Hat, only to witness the shocking story come frightfully to life and prepare for an adventure beyond their wildest nightmares.

A must-own for fans of the classic series, as well as those new to the franchise, the Are You Afraid of the Dark? DVD also includes three fan-favorite episodes from the original series and will be available for the suggested retail price of $13.99."

Are You Afraid of the Dark? Episodes:

Special Features (US only): 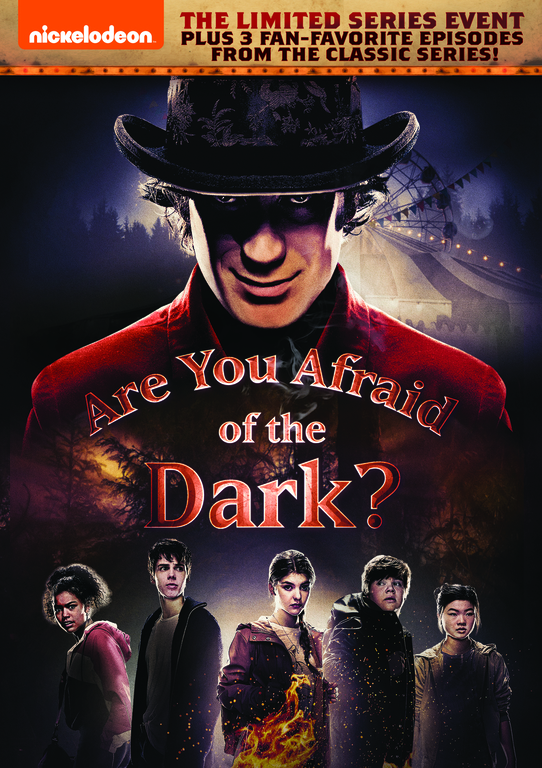