Props are an essential component to any film, but they were an extremely crucial element in bringing Paul W.S. Anderson’s Monster Hunter video game adaptation to life, and it was up to props master Kerry Van Lillienfeld and his team to find a way to bring the game’s impressive weaponry and armor into fully realized creations for the film. The attention to detail that Van Lillienfeld utilized when actualizing Monster Hunter’s trademark items not only helped further entrench fans of the game series into Anderson’s cinematic version of that world, but also provided audiences with a few thrilling visuals to boot (seeing Tony Jaa wield a ten-foot sword will never not be a badass sight).

Recently, Daily Dead had the opportunity to speak with Van Lillienfeld, and during the interview, the props master gave us the rundown on what his job usually entails when working on a film, and how it was a different experience for him while working on Monster Hunter. Van Lillienfeld also discussed the challenges he faced on the film, his experiences collaborating with Anderson once again for Monster Hunter, and he even talked about one of this writer’s favorite props from the last few years—the mysterious invitation boxes from Escape Room (which were all practical).

What do you think is the biggest misconception about what props do for a movie?

Kerry Van Lillienfeld: Well, props are the actors' property, so it's anything an actor touches and interacts with. It's such a wide-ranging thing, and often it's so wide-ranging for my job. Because some people say, "Oh, that's a prop." And I'll say, "No, that's set dressing." Or, "That's construction." Where do you draw the line? What is the actor's property? In this movie, that huge ship, it's called the Dragonator, which they put a big barrel in and shot. That would usually be called construction and a mix between SFX. On this one, because my production designer [Edward Thomas] and I have worked together so closely over many years, he asked me to do that because there's just some things that you want to really put a bit more love into, sometimes. And he thought we'd do that pretty well.

So yeah, it's a weird thing, where it's not just a briefcase that you're picking up or a knife that you're going to stab somebody with. We made nearly all the armor on Tony Jaa and on Milla. Now, should that be from the costume department? Is that a prop? Some would say no, some would say yes. We try to grab anything and everything, if possible. We want to do it all. Sometimes we do it a bit too haphazardly, and to our own detriment, because we're so keen to create.

You worked with Paul on his last movie, which was Resident Evil: The Final Chapter, which I'm also a big fan of. With Resident Evil, there's a little room to play, because they're not perfectly in line with the video games. But here, everything felt reflective of the world and the weaponry and the wardrobe of Monster Hunter. Was this a much different experience for you this time around?

Kerry Van Lillienfeld: Very much so. I worked on Resident Evil with Paul, and we did a TV series called Origin, too, where he was the first director on it. And then we did Monster Hunter. With Resident Evil, you had much more of a world to play with. Alice is a Paul and Constantin Film's creation; it's not a Capcom creation. You can do what the script and what the director wants. For Monster Hunter, Paul and Milla both play the game, and they arrived and they said they wanted a hundred percent to stick to the game, to stick to the look. It's a blessing and a curse at the same time, because you don't have to come up with the stuff. So when you’re working on your concepts, you don't have to sit there, breaking your mind about what it is. You just have to go into the game and find the piece and replicate it.

But again, that brings its own difficulties, because that was created by a game designer who has no physical limitations, whereas you have extreme physical limitations. Some of the stuff we can make easily, but does it survive the first five minutes of a fight scene on a rocky mountaintop? That's where it starts getting difficult. Because your cast member is going to be wearing all of this stuff, and fighting with it, and it's got to look exactly like the game. Well, we try to make it look exactly like the game. I think we succeeded very well in some of it because some of it was just picture perfect. But yeah, it was a challenge in its own right. And then obviously some of the scale of some of the weapons is just mind-blowing. In a video game, your character can swing a 10-foot sword around, but in reality it's pretty difficult. But Tony Jaa could. Tony Jaa could. It was quite unbelievable.

How long was the R&D process then for you on this? Did you have a lot of time to pull those designs from the game and figure out how to make this functional in the real world?

Kerry Van Lillienfeld: I think the shoot was six months, and I think we had four or five months. I'm sure Ed, my production designer, had more. But Ed always comes to the party knowing exactly what he wants. Then again, Paul knows exactly he wants, too. You can do your research, and then Paul arrives and he wants something completely different, and you're like, “Oh well, there goes three weeks down a rabbit hole.” But with Paul, the guy's passion is amazing. Sometimes you're like, "No, we can't do that." And then he sits and explains to you why it needs to be done, and by the end of the conversation, he's completely convinced you and you're realizing you're now working through the night. But you're a believer.

But we had a nice long time on Monster Hunter, and there was a lot of research to get everything right. Luckily, all of the games have this little mini-movie that introduces everything, so we watched a lot of those mini-movies, and we played the game as well. That gave us a clear idea of exactly what we had to do.

You mentioned that 10-foot sword, and Tony Jaa getting in there and handling it. When you're building weapons like that, how much does the actual performer then have to play into, I don't know if mechanics is the right word, but the ability for that prop to look natural on screen? Do you have to have the performers come in and try to work with them a little bit before shooting?

Kerry Van Lillienfeld: So with Tony's giant sword, I was terrified. We figured out how to make it lighter after several attempts, so it would be light enough to wield around and not hurt somebody. He's nearly my height, because we’re both 5'5-ish, 5'6-ish guys. I was able to put it over my shoulder, walk around with it, and I could swing it to the ground. But I was very worried, I must admit. But Tony walked into that first fitting and he picked up that sword and he started doing things that I just couldn't believe. It was just amazing. His martial arts skills are obviously so advanced. He just saw this thing and he started doing these crazy moves, and it was instinctual. There are so many actors that actually wouldn't have been able to pull that off, even through weeks of prep. They just wouldn't have been able to do it. But because of his martial arts skills and his background of being a stunt coordinator he just could do it, which is incredible.

And when Milla walked into my office and picked up her duel swords, she just started spinning them around and I was like, "My God, are you really doing that?" She says every time she goes walking the dog with Paul, she picks up sticks and spins them around. But those two, they're incredible people who are just keen to do their job, and the most friendliest, humblest people you will come across.

Were there things that you had wanted to put into Monster Hunter that ultimately didn't end up making the cut?

Kerry Van Lillienfeld: Actually, not so much because those characters were really written a certain way based on the game, so we knew exactly what those guys wore and what kinds of weapons they needed. The hard part was replicating all of it exactly. There were some small things that didn’t make it, like they carry these little lanterns on them in the game and they show you stuff in the dark. So, we spent a lot of time creating those lanterns with these little blinking lights, and they didn't make it into the movie. They just looked odd. Beyond those, there wasn’t really anything else.

I wanted to ask before we go about Escape Room, because I love that movie, and there are so many things to it that I thought were really rad. But the thing that has always stuck out to me was the invitation box that everybody gets presented with before they have to go through the maze. They’re so cool and unique. How on earth did you guys pull those boxes off? They seem so tricky.

Kerry Van Lillienfeld: Oh, yeah. That was something very different than anything we did on Monster Hunter because we had to totally conceptualize them all on our own. We went through so many different ideas of what the box is supposed to be—is it supposed to be a Chinese puzzle box? It took forever just to get to what the box looks like. And then you've got to start figuring out how this thing is going to work. I had a Pelican case with six or seven in it. One of them did some movements, this one flipped open, this one had a final flick open where you turned, and then we had a remote control where you hit a button and it flicked out that card that you got. So it was all practical. It just had to be done in stages, where you'd take the stage one box out of the actor's hands, then you would give him stage two.

But yeah, it was quite unbelievable. It took months to just sign off the design, never mind then once you've got a design, you've got to figure out actually how to make it, and have a mechanism that flicks out a card. It's like a watchmaker's nightmare on the inside of that box, with all these tiny little cogs and a remote control that's going to shoot it out. So yeah, Escape Room was a great one to work on. I've got one of those boxes on my shelf still.

Check here to catch up on our previous coverage of Monster Hunter, including interviews with Paul W.S. Anderson and Milla Jovovich! 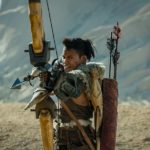 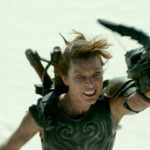 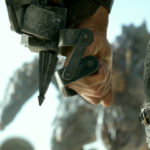 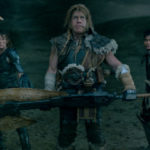 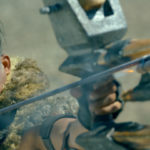 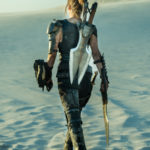 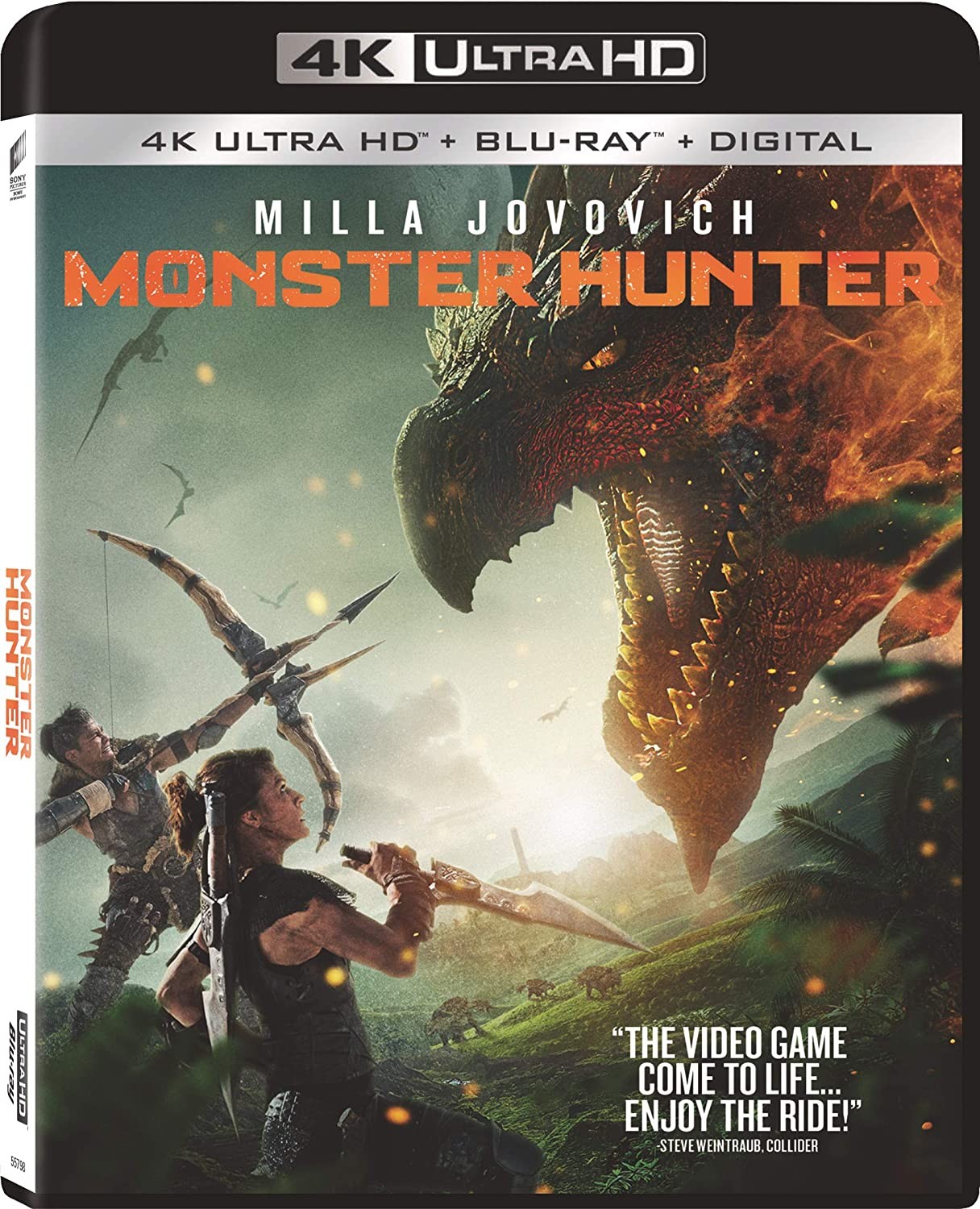