After keeping the horror genre alive and well in South Florida during the COVID-19 pandemic, the hard-working team behind the Popcorn Frights Film Festival is closing out their Drive-In Horrorshow summer screening series in safety and style on Friday, August 14th with the world premiere of the Caroline Williams-starring Ten Minutes to Midnight and the Southeast US premiere of filmmaker Jay Baruchel’s new horror movie Random Acts of Violence.

The double feature screening will also include the world premieres of Mathew and Nathaniel Barber’s short film No One is Coming and Zach Wincik and Danny Salemme’s short film Cottonmouth.

We have the press release with full details below, and to learn more about the Drive-In Horrorshow and the Popcorn Frights Film Festival, visit their official website.

Press Release: FORT LAUDERDALE, FL - Popcorn Frights, the largest genre film event in Southeast US, has announced its Drive-In Horrorshow will end its pop-up summer series on Friday, August 14 with the world premiere of TEN MINUTES TO MIDNIGHT starring Caroline Williams in her first-ever return to the DJ booth since her star-making turn in THE TEXAS CHAINSAW MASSACRE 2! The drive-in event will also feature the Southeast US Premiere of Jay Baruchel’s RANDOM ACTS OF VIOLENCE as part of its double-bill of mayhem experience that will include short film premieres, rare nostalgic and weird video clips, and other surprises.

“Despite the extraordinary circumstances and challenges of 2020, we are proud to have been able to continue our mission to bring community together and celebrate the best that genre cinema has to offer. We are indebted to our partners – Shudder, Twilight Features, and Mass District – as well as the filmmakers who shared their work with us, and especially all the horror fans who joined us night after night celebrating these incredible films in this unique movie going experience. We’re grateful to have spent this summer together feeling joy, fear, and just being able to have a great time at the movies again,” said Igor Shteyrenberg & Marc Ferman, Founders & Directors of Popcorn Frights.

Popcorn Frights’ drive-in double bill will open with the Southeast US Premiere of the slasher film of the summer, RANDOM ACTS OF VIOLENCE, Jay Baruchel’s long-anticipated feature film adapted from the popular horror graphic novel by the same name, starring Jesse Williams (Cabin in the Woods) and Jordana Brewster (Fast and the Furious series and Texas Chainsaw Massacre: The Beginning). In this shocking gorefest, a comic book writer visits the town where a serial killer previously wreaked havoc, only to encounter scary similarities between the character he created and the horrific real-life events. Shudder will be releasing the title on the streaming service later this month. Jay Baruchel shared the following statement about his film receiving its Southeast US Premiere at the Popcorn Frights Drive-In Horrorshow:

"Thanks to Shudder and Popcorn Frights for screening Random Acts of Violence! Watching this movie from a car should make the experience all the more terrifying! Hope everyone is staying safe and healthy. Enjoy the movie!"

The Drive-In Horrorshow double-bill will close with the world premiere of TEN MINUTES TO MIDNIGHT starring horror icon Caroline Williams. In this stunning blend of over-the-top gore and violence, a bite from a rabid bat turns a punk rock DJ (Caroline Williams) into a blood-sucking vampire as she prepares to perform her last broadcast during a raging storm. The film also stars Nicole Kang (Batwoman) and late genre-favorite Nicholas Tucci (You're Next) in one of his final performances. Filmmakers Erik and Carson Bloomquist said the following about having their film world premiere at Popcorn Frights:

“The TMTM team is elated to world premiere at Popcorn Frights. Our film’s old school aesthetic throwbacks and exploration of a faded golden age make a debut at the drive-in especially poetic. Popcorn Frights is right on the pulse of the genre and fueled by a palpable understanding of the importance of communing at the cinema (especially in times like these). We can’t wait to launch our night terror with their audience.”

“We are incredibly excited that our short film No One is Coming will have its world premiere at Popcorn Frights. The Popcorn Frights team are top notch and put on what is recognized as one of the very top horror festivals in the country. In 2019, Popcorn Frights was one of the first festivals to give us the opportunity to screen our previous short, Go Back, which really seemed to jumpstart its festival run. Needless to say, Popcorn Frights and the people of South Florida hold a special place in our hearts. To top it off, this event is the perfect location to premiere our short because our film is a love letter to 80s horror and what better place to screen at than a drive-in!”

The Popcorn Frights Drive-In Horrorshow is a pop-up summer series that over the last three months featured more than a dozen film premieres of international genre films and reached over 1,500 film fans. The drive-in series was launched by Popcorn Frights to support independent filmmakers whose movie releases were upended by the COVID-19 pandemic. Popcorn Frights remains dedicated to supporting the international genre film community and providing its fans with a safe moviegoing experience that they can all enjoy together for a screaming good time. 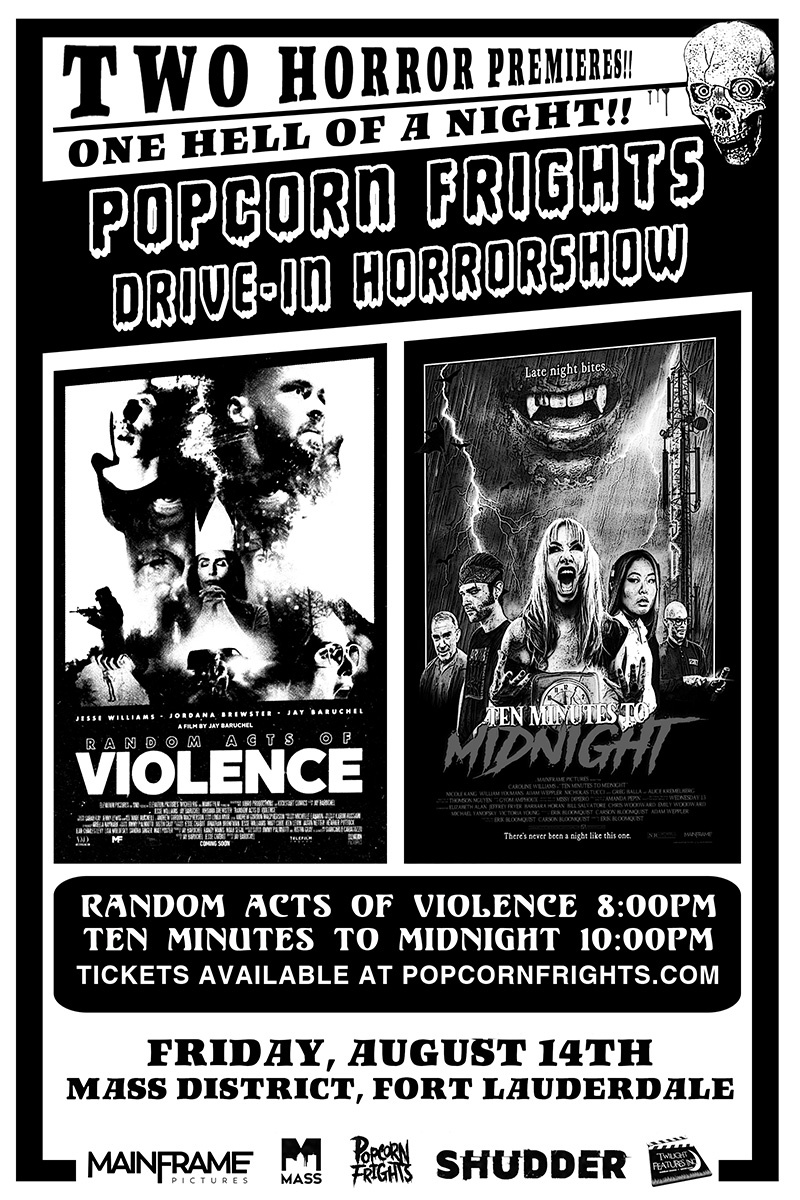