This August, Popcorn Frights Film Festival is returning for its eighth edition with a combination of in-theater screenings and virtual streamings, and Festival Directors Igor Shteyrenberg & Marc Ferman have once again curated a killer lineup for horror fans to enjoy, as the festival's first wave of programming includes the world premiere of Tyler Cornack’s Tiny Cinema, Richard Vergez's live performance of an original score to F. W. Murnau’s Nosferatu to celebrate the film's 100th anniversary, the world premiere of Kyra Gardner's documentary Living with Chucky, and much more!

As previously announced, this year's Popcorn Frights Film Festival will be taking place at Fort Lauderdale's historic Savor Cinema for a weekend of exciting screenings on August 11th–14th, followed by more film premieres and short film presentations on August 19th–21st in The ALTER Screening Room at the O Cinema South Beach!

Below, we have a look at the full first wave of programming for this year's Popcorn Frights Film Festival. Stay tuned to Daily Dead for more updates and be sure to visit Popcorn Frights' official website!

July 12, 2022 // – Popcorn Frights is roaring back with a vengeance for its eighth edition to celebrate the one-of-a-kind, endless possibilities of genre cinema it champions in its retina-reeling, round-the-world showcase of some of the medium’s most boundary-pushing and mind-enhancing films.

Popcorn Frights’ opening night is presented by Giggster and will open with the World Premiere of TINY CINEMA, Tyler Cornack’s follow-up to his acclaimed provocative feature debut Butt Boy. In his new twisted anthology, a mysterious stranger tells jolting tales of terror of seemingly unconnected strangers whose lives will change in incredible and bizarre ways forever.

Running August 11-21, the first wave of films is headlined by six feature film World Premieres, including the documentary LIVING WITH CHUCKY featuring interviews with Don Mancini, Jennifer Tilly, John Waters, and Brad Dourif discussing the magic of the “Chucky” franchise. Also premiering at the festival is the Tim Burtonesque fairy tale with zombies THE LONELIEST BOY IN THE WORLD, as well as the ultraviolent slasher FINAL SUMMER, which will play with SHE CAME FROM THE WOODS as part of a special Night at Camp Frights double-bill presented by Slasher Energy.

In celebration of its centennial anniversary, NOSFERATU will receive a one-night-only showing accompanied by a live performance of an original score composed by Miami artist Richard Vergez. Also featured in the festival program is Carter Smith’s riveting queer body horror tale SWALLOWED starring Jena Malone and Nightmare on Elm Street 2’s Mark Patton, which will be complemented by a special free presentation of Carter Smith’s cult classic creature feature THE RUINS.

Worldwide, weird, and wonderful genre films return with a selection of titles that refuse to be categorized. Highlights include the North American Premiere of Florida-based filmmaker Sylvia Caminer’s stylish psycho-sexual thriller FOLLOW HER, the Argentinean gore-fest PUSSYCAKE, and the indigenous Canadian SLASH/BACK, a genre-bending alien invasion story about a group of Inuk teenagers from the Arctic who defend their town from malevolent extraterrestrials.

Recognized as the largest genre film event in the Southeast U.S. and one of “The World’s 50 Best Genre Festivals” by MovieMaker Magazine, Popcorn Frights will complement its in-theater festival program with an online virtual component available to stream throughout the United States for those unable to travel to the festival in South Florida.

Notable features exclusively playing in Popcorn Frights’ virtual program include the World Premieres of the striking supernatural nail-biter THEY WAIT IN THE DARK and the gut-wrenching survival thriller DISTRESS SIGNALS, as well as the riotously cathartic #metoo-tinged revenger COMPULSUS, the grisly humorous THE LEECH, the eerie ghost story THE CREEPING, the revealing documentary about one of the most influential comic book creators of all time MIKE MIGNOLA: DRAWING MONSTERS, the retro-styled slasher parodies THE THIRD SATURDAY IN OCTOBER and its sequel PART V, and the dreamy, psychedelic love letter to horror movies HONEYCOMB.

Rounding off Popcorn Frights’ first wave program is its Virtual Reality experience created in partnership with the O Cinema, an independent non-profit based in Miami. Hosted on AltSpaceVR, the Virtual Reality environment features live events and an exclusive selection of short films premiering in this one-of-a-kind digital experience. Visitors have the opportunity to fully explore the VR world, walk the red carpet and even fly through the space before entering each designated portal to view the short films. The AltSpaceVR platform is free to access and available through Quest, STEAM headsets, or on PCs.

A second wave of Popcorn Frights 2022 titles will be announced in the coming weeks featuring additional in-theater and virtual programming.

Access to the in-theater experience will be available through individual tickets or an all-access badge, which will provide an all-inclusive experience for films and special events hosted at the Savor Cinema Fort Lauderdale and O Cinema South Beach (“The Alter Screening Room”), Popcorn Frights official host venues this year. Separate virtual passes are also available and will provide access to every film streaming in the festival’s virtual program. To order an In-Theater All-Access Badge, click here, to order a Virtual All-Access Pass, click here.

This year’s Popcorn Frights official poster was created by South Florida artist Kent Hernandez, who previously crafted imagery for the event in 2021, and has designed a new original poster for the festival.

The eighth edition of the Popcorn Frights Film Festival is made possible with the support of its generous sponsors, including ALTER, The Betsy, Giggster, O Cinema, Savor Cinema, Screambox, Slasher Energy, Tubi, and its loyal fans. For more info about Popcorn Frights, visit PopcornFrights.com

A mysterious stranger tells the twisted tale of seemingly unconnected strangers whose lives will change in incredible and bizarre ways forever.

In the wake of a tragedy during the summer of 1991, a group of camp counselors find themselves fighting for their lives against a masked killer.

An aspiring actress responds to a mysterious classified ad and finds herself trapped in her new boss’ twisted revenge fantasy.

A filmmaker who grew up alongside the Chucky doll, and whose father helped bring it to life, finally meets the other families surrounding the Chucky franchise.

The Loneliest Boy in the World

After the tragic loss of his mother, a boy is threatened with state custody unless he can find a new family. And he does just that… He digs one up at the local cemetery.

Nosferatu, A Symphony of Horrors

A struggling all-girl rock band kicks off a new tour, hoping to rekindle their popularity. But when they catch the attention of horrors from beyond our reality, the band realizes that being forgotten by their fans is the least of their problems.

A leisurely Mexican holiday takes a turn for the worse when a group of friends and a fellow tourist embark on a remote archaeological dig in the jungle, where something evil lives among the ruins.

She Came from the Woods

In this contemporary ode to ‘80s summer horror, a group of counselors accidentally unleash a decades-old evil on the last night of camp. As the mayhem and madness turn bloody, the staff of Camp Briarbrook is forced to confront what stories are worth telling and what secrets worth keeping.

Something sinister from outer space lands a stone’s throw from the Arctic Circle, and humanity’s first line of defense proves to be a group of Inuit girls armed with nothing but their wits and a bunch of traditional hunting and fishing tools, and strategies they picked up from their favorite horror movies.

Two best friends on their final night together suddenly find themselves in an unsettling situation that spirals into a backwoods nightmare of drugs, bugs, and horrific intimacy.

A woman's safety is key in a community where known assailants receive their just desserts from an unlikely vigilante.

A concerned young woman moves home to look after her ailing grandmother and soon finds herself fighting a malevolent presence with a dark secret.

When a fall down a steep rock face separates her from her friends, a woman finds herself stranded. Now, alone and with a dislocated shoulder, she must make her way out of the woods — and contend with how she got there.

Five small-town girls abandon their mundane lives and move into an abandoned cabin. Growing increasingly isolated, their world becomes filled with imagined rituals and rules but the events of one summer night threaten to abruptly end their age of innocence forever.

A devout priest welcomes a struggling couple into his house at Christmas time. What begins as a simple act of kindness quickly becomes the ultimate test of faith once the sanctity of his home is jeopardized.

The definitive story of one of the most influential and important comic book creators of all time features interviews with Guillermo del Toro, Neil Gaiman, Patton Oswalt, and Doug Jones, among others.

The Third Saturday in October

When a psycho goes on a murderous rampage after surviving a botched execution, only two survivors of his initial attack can stop him.

In this sequel, an unstoppable killer stalks and butchers the occupants of multiple homes across the stretch of one lone country road as the residents prepare to watch the yearly college football game.

They Wait in the Dark

A young woman and her adopted son are on the run from her abusive ex until a supernatural force from her dark past begins haunting them.

Popcorn Frights’ Virtual Reality world experience is created in partnership with the O Cinema, an independent non-profit based in Miami. Hosted on AltSpaceVR, the Virtual Reality environment will feature live events and an exclusive selection of short films that will receive their premieres in this unique digital space. The AltSpaceVR platform will be free to all audiences and available through Quest or STEAM headsets or on PCs.

Popcorn Frights Film Festival presents the best of contemporary genre cinema from across the world as it celebrates the art of horror. The ten-day festival is Southeast U.S.' largest genre film festival and prides itself on premiering films from emerging and established filmmakers, enabling the industry and general audiences to experience the power of storytelling through genre film. 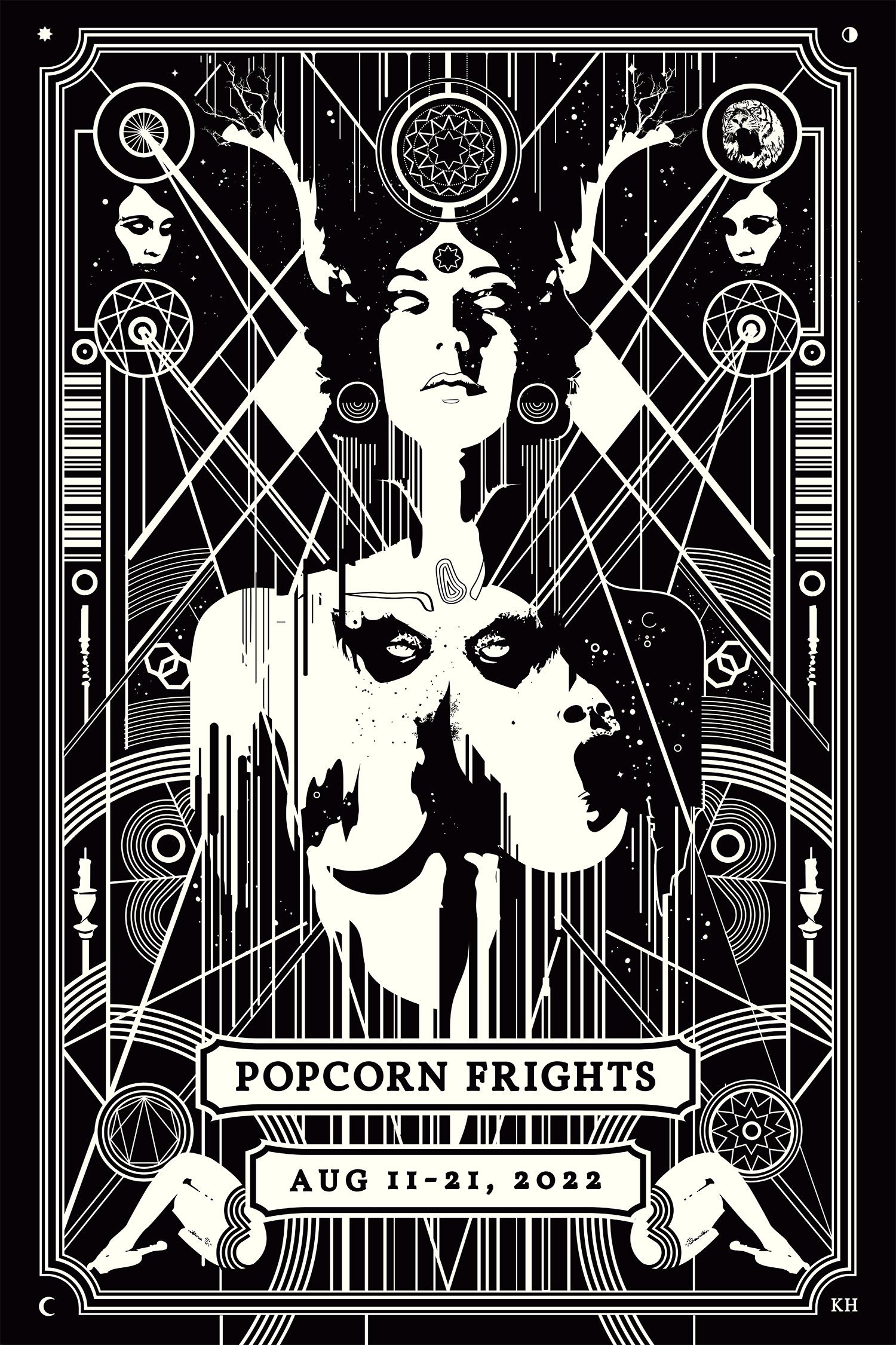