After witnessing his own murder in the future, a clairvoyant man has no choice but to change his destiny in the new sci-fi thriller Volition. With the film out now on Apple TV, Prime Video, and other Digital platforms via Giant Pictures, we caught up with co-writer/director/co-producer Tony Dean Smith and co-writer/producer Ryan W. Smith in a new Q&A feature to discuss how real-life epiphanies shaped the movie's story, filming grueling night shoots in Vancouver, and collaborating with friends and family to make their movie a reality.

Thanks for taking the time to catch up with us, and congratulations on Volition! How and when did you come up with the idea for this film?

Tony Dean Smith: The kernel for Volition came to me in film school. Back then it was a short film about a scientist who was always late, but who then stumbles upon an invention/drug that makes him perceptually early, in fixed increments. The idea was fun, but not really grounded. So I tabled the project, I but I always loved the idea about a person who could only see their own future, not everyone else’s life.

How long did it take you to write the first draft of Volition, and how many drafts did you go through before you were ready to film?

Tony Dean Smith: I did the first draft very quickly, based on a number of epiphanies I had about my own life and how it possibly related to the life of our protagonist, James. I realized that I was feeling a bit stuck in my film career, and that my own perception and belief about myself might have been the very thing holding me back. In a way, I stuck perceiving a future that I was actively building by not pushing through the fear. After working through this new grounded take on the story, Ryan came on board and we started on what eventually became the film you see now.

Ryan W. Smith: Once Tony and I started working together, we kept all the incredible parts of that early draft and then started toying with different ways to tell the story. The structure is what really kept us digging, as we played out the various potentials for the story. It’s really a puzzle film, and there were so many time when we came close to thinking we’d never solve it. We probably went through four or five entirely different versions of the story before landing on the version that exists now, and then the current version honestly went through hundreds of drafts/iterations. And then, of course, there was all the re-writing that occurred during Tony’s edit.

Ryan W. Smith: We shot the film over 18 days of principal photography, with some extra days for pick-up/re-shoots here and there. But, really, rather than days, we should be talking in “nights,” since the schedule had enough night shoots to keep us in a semi-delirious state most of the time. All was shot in our home city of Vancouver, B.C., Canada.

You got to work with a great cast on this film, including Adrian Glynn McMorran, Magda Apanowicz, John Cassini, Frank Cassini, Aleks Paunovic, and Bill Marchant. What was it like to collaborate with such a talented group of actors to bring your story to life?

Tony Dean Smith: I feel very blessed to have had access to such an incredible pool of talent. They always say casting is 95% of the process, and we all feel lucky to have come together to work on this film. Everyone really loved the script and the collaboration process was endless amounts of fun. The script continued to get deeper as our cast offered their unique perspectives both on their characters, but also how it tied back into their own lives.

Were you influenced or inspired by any other sci-fi thrillers or premonition-based movies while working on Volition?

Tony Dean Smith: It’s very hard to not be inspired by so many great takes within the sci-fi genre, but we really wanted to steer clear of anything that might have been done, and so we actually avoided watching other movies within the genre until very far into our later drafts. Ryan and I are both cinema lovers and also are people who love to geek out on esoteric ideas, philosophy, and new science. So I’d say we started from James’ unique situation: a clairvoyant who sees his own death, and we built the world from there.

Tony Dean Smith: The most painful memory (literally), is when I was showing the stunt coordinator EXACTLY how I wanted James to be thrown off of a bed and into some furniture. Since I’m clearly a method director, I threw myself off the bed, landed on the floor, and tore the ligaments in my wrist. I took about 30 seconds to realize the pain, then continued the shooting day (while wearing a wrist splint). Reminds me of the famous quote: pain is temporary, but film is forever. :)

Ryan W. Smith: We were told that making an indie film would be challenging, but this really did take our entire beings to pull off. We were lucky to have so much support from the cast and crew, many of whom are old friends and family members. Our sister, Keri, was our AD and an Associate Producer, and our other sister, Ricci, catered all the meals on set. As for memorable moments, it’s all a blur, but I’ll never forget the tight familial feeling on set. Everyone, from our DP, Byron Kopman, to our leads, Adrian and Magda, really gave this project their everything.

What did you learn from the making of Volition that you’ll apply to future filmmaking projects?

Tony Dean Smith: We know now what we can pull off a budget of this size and movie with this type of scope. So we’re excited to get back out there and stretch our visions even more. I think the biggest takeaway is that “it takes a village” is true, but that it takes self-starting and belief to even begin to attract those “villagers.” Everyone loves to support people who are trying to make art, so I encourage everyone to get out and do it! Us included.

Ryan W. Smith: If you’re going to shoot night shoots, don’t schedule them in a Vancouver summer, when the nights are only 4-5 hours long!

Volition has been well received by viewers, including winning Best Feature at the Philip K. Dick Film Festival. What has it been like to see these initial positive reactions to your film?

Tony Dean Smith: The entire festival run experience and the reviews that followed have been incredibly gratifying and inspiring. Ryan and I feel we took some pretty big swings with the film, with the twists and structure, so we’re just delighted that the reception has been so positive. Our PKD screening and win was so exciting and it really feels like the film found its audience. Traveling to FrightFest in the UK also opened us up to the big umbrella of sci-fi/horror, which Volition also easily slides into.

Ryan W. Smith: We really didn’t know what to expect with the festival run, so to be championed by the genre festival world has been just incredible. And while we expected the sci-fi festivals to consider the film, we love that the horror festivals have also embraced it. Volition is primarily cerebral sci-fi, but we’ve come to see that it definitely also contains elements of psychological horror.

Ultimately, what do you hope viewers take away from Volition?

Tony Dean Smith: The movie is a non-stop thrill-ride, so we hope people enjoy the high-stakes game of fate vs. freewill that James has to play. And on a deeper level, I think we can all find a place in our lives where we might be stuck. Like James, I hope we all get inspired to do the hard thing to improve those areas in our lives that we feel trapped by.

Ryan W. Smith: We hope they’re gripped by the cerebral puzzle of the film, but, even more so, that they connect with the characters and their journeys.

What has it been like to partner with Giant Pictures to bring Volition to the masses?

Ryan W. Smith: The team at Giant has been fantastic! They’ve been an excellent addition to the team. From the very beginning, we’ve had an excellent partner in Paly Productions. It’s Paly Productions that really brought us to production. But Giant’s expertise in the distribution of the film has been second-to-none. We’re excited for all they’re doing to share Volition with the world.

With Volition out now on Apple TV, Prime Video, and other Digital platforms, what other projects do you have coming up that you’re excited about, and where can our readers follow your work online?

Tony Dean Smith: We can’t reveal too many state secrets, but we are working on a number of very cool projects that relate to Volition, and also a few that will be natural stretches for us into new science fiction territory. One story that is close is about our grandfather, who was a magician, but who also suffered from dementia towards the end of his life. So we’ve built a story around the world of mental illness, illusions, and redemption.

Ryan W. Smith: We’re also developing a TV series that is definitely related in interesting ways to Volition. Again, it’s a grounded sci-fi premise, but rather than exploring all through one character’s perspective, it takes on a broader, social view. We’re hoping it will allow us to speak to the various elements that concern and excite us about our current world. 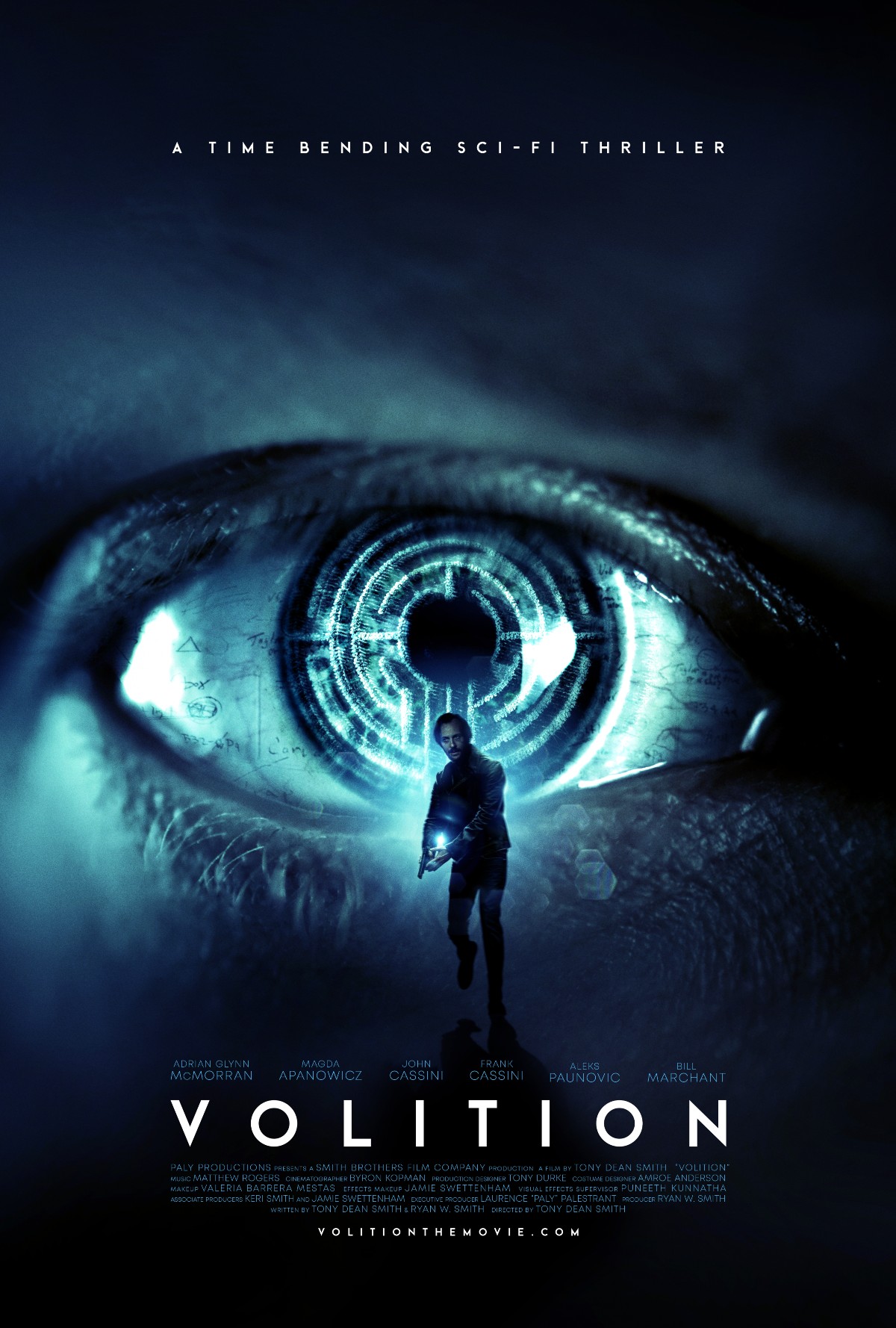