Crime scene cleaners get more than they bargained for when they encounter a manipulative demon in the new horror film 11th Hour Cleaning. With the mind-bending movie now On Demand via Screen Media Films, we caught up with director Ty Leisher to discuss the real-life inspirations behind his new film, collaborating with the talented cast, taking a unique approach to the haunted house genre, and more!

You can read our Q&A with Ty Leisher below, and to learn more about 11th Hour Cleaning, visit:

Thanks for taking the time to answer questions for us, Ty, and congratulations on 11th Hour Cleaning! How and when did the idea for this film originally come about?

Ty Leisher: It’s my pleasure, thank you for having me!

Eric, Ed and I were coming off another film falling apart that we had spent a ton of time in development on. We asked ourselves if we wanted to make a movie, or just keep talking about making one. We set a date about six months later and started moving toward that target.

We spent a week or two batting around ideas. We wanted to do our take on the haunted house genre but with a unique spin. I’m a big fan of mythology and mentioned a childhood that sparked 11th Hour Cleaning. My parents owned a foreclosed home cleaning company, and one evening we entered a house they were to clean, but when we stepped inside, we discovered it had been the scene of a gruesome murder-suicide. We left immediately, but that memory stuck with me.

How long did you and co-writer Ed Morrone work on the screenplay, and how many drafts of the script did you go through before cameras were ready to roll?

Ty Leisher: Ed, Eric and I broke the story together over a week or two. We set a shoot date of December 8th when we came up with the idea, which was six months away at the time. Once we had the story, Ed and I wrote the draft in about four weeks. We spent another three months or so rewriting it about five more times before we locked script and went into production. We kept rewriting on set, too, and I’m grateful our cast was amazing and went with the changes.

Where did filming for 11th Hour Cleaning take place, and how many days were in your shooting schedule?

Ty Leisher: We shot it in December 2017 for 13 days. We did some reshoots and additional scenes about a year later after we cut the film and did a test screening.

Was the making of 11th Hour Cleaning impacted by the pandemic in any way?

Ty Leisher: The production wasn’t because we had wrapped long before COVID, but post-production definitely took longer than expected with visual effects artists having to drop out and finding replacements. But Addison Petrie, our amazing visual effects supervisor, really helped carry the film through that period. We didn’t want to rush the film into distribution; we wanted to take our time and do it right. When you’re making your first feature, you have to remember that you may never get another chance, so I wanted to make sure this was the best I could make it before putting it out there, and I think we did that.

I love that crime scene cleaners are the main characters of this film. How important was it for you to tell this story through the eyes of those characters?

Ty Leisher: It was a crucial part of the story for me because it was almost directly inspired by my parents. While none of the characters were modeled after my parents, being able to tell that part of their lives was quite meaningful. Plus, we really hadn’t seen many horror films about crime scene cleaners, who really see some gruesome stuff.

You worked with a great cast in this film, including Chloe Brooks, Edward Finlay, Anita Leeman Torres, and Ed Morrone. What was it like collaborating with them to make this movie?

Ty Leisher: I loved collaborating with the cast on this film. Ed and I have worked together before - he was the antagonist in a web series I directed called “Bullets” - and I loved what he brings to the characters he inhabits. Chloe, Eddie and Anita all brought so much to their characters that seeing them read the script for the first time gave me chills. There is a lot of heart in this movie, a lot of character moments that you don’t normally see in a horror film and this cast made those moments shine.

Ty Leisher: There’s a scene in the movie where one of the characters is holding a piece of the relic and is being tempted by a hallucination into dropping it. That was my favorite scene to direct because I really got to stretch my directing muscles and shoot a lot of coverage due to the schedule. Aside from that I had two favorite moments: the first and the last time I called “action.”

While making 11th Hour Cleaning, were you inspired by any other movies, TV shows, books, comics, or video games?

Ty Leisher: I’ve always loved films that twist your perception of reality. Films like Oculus, Shutter Island, 1408, and The Machinist were huge inspirations for me when creating 11th Hour Cleaning. A video game that had some impact on me indirectly was called Eternal Darkness for the Nintendo Gamecube. It had this really interesting mechanic where your character would go insane and something reality warping would happen before resetting back to a save point.

Ultimately, what do you hope viewers take away from 11th Hour Cleaning?

Ty Leisher: I hope, first and foremost, they walk away entertained and a bit horrified with a little more adrenaline in their bloodstream than when they walked in. But thematically the movie is about facing your fears and overcoming your past to grow as a person and live your life.

What has it been like to team up with Screen Media Films to release 11th Hour Cleaning?

Ty Leisher: Screen Media has been an amazing partner in the release of 11th Hour Cleaning. They’ve gone above and beyond our expectations for where we saw the film going. Seth Needle and Logan Taylor were incredibly easy to negotiate with and the entire team has been a blast to work with.

With 11th Hour Cleaning now On Demand, what other projects do you have coming up that you’re excited about, and where can our readers go online to keep up to date on your work?

Ty Leisher: Eric Brodeur and I are developing a few action and horror films that we’re shooting later this year and early next year. We’ve been talking about where the 11th Hour Cleaning story can go from here and have a few other psychologically twisted stories we need to get told.

Synopsis: "A team of crime scene cleaners experience ghastly hallucinations and must confront their most personal regrets and fears when they are trapped at a recent murder site by an ancient Nordic demon hell-bent on driving them insane. As they uncover what truly happened to the murder victims, they must escape their own deaths by finding and destroying the Norse relics that give the demon its powers." 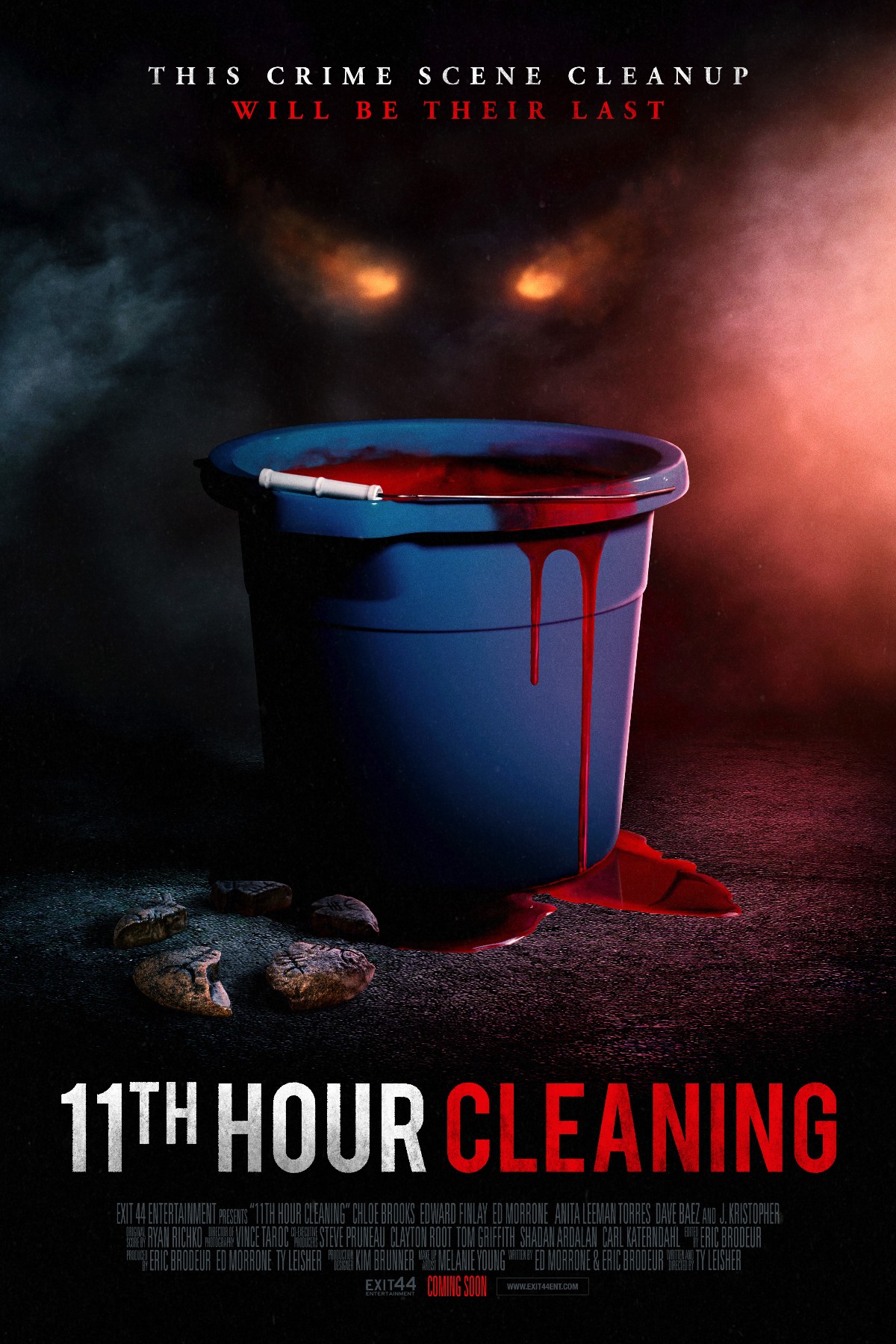