A mother's fierce love stands between her child and a mysterious cult in the new movie Son, and with the horror film now available in theaters, On Demand, and Digital from RLJE Films, we caught up with writer/director Ivan Kavanagh (The Canal) to discuss the inspiration for his chilling new story, collaborating with Andi Matichak and Luke David Blumm to create a realistic mother-son bond, and the joys of working with RLJE Films and Shudder.

Thanks for taking the time to answer questions for us, Ivan, and congratulations on your new movie, Son! How and when did you first come up with the idea for this film?

Ivan Kavanagh: The initial idea came to me just after the birth of my first son, five years ago. He had a very difficult birth and my wife and I were very worried about him for months afterwards, and it was a very stressful time for us, losing a lot of sleep. But during this time I could see how close my wife and son were becoming, and I could see just how special and strong that mother and child bond can be. I then began to think about how far a mother, who loves her child more than anything else in the world, would go to protect her child. Is there anything that she wouldn’t do? Would that love have any limits? I then began writing during these sleepless nights, which might account for the very nightmarish or dreamlike feeling and logic of the film.

How long did it take you to write the first draft of the screenplay, and how many drafts did you go through before it was time to film?

Ivan Kavanagh: I wrote the first draft very quickly. Perhaps because it was so personal and was filled with my own fears and neuroses, it just flowed from me. I then, in subsequent drafts, worked on the structure of the script, until it felt right to me. It took about a year and a half to finish, which is about average for me.

The mother-son bond between Andi Matichak and Luke David Blumm is the beating heart of this movie. What was it like working with them to create a realistic and heartfelt mother-son dynamic?

Ivan Kavanagh: I knew casting of the mother and son would be crucial for the film to work, and I knew Laura, the mother, needed to be someone who the audience would stay with and care for no matter what she did. I don’t do traditional auditions. I just like to meet the actor and see what they are like in reality. And I knew the moment I met Andi that she was correct for the role. As well as being an incredibly talented and fearless actor, I knew the audience would find her instantly likeable and would want to stay with her through all the horrors that she goes through.

The casting of the boy was more difficult. We auditioned about 500 children and it was actually quite late in the process and not that far from filming when an audition tape came in from Luke. I knew the moment I saw it that he was the right kid and the next day I drove to Atlanta to meet Luke and his father, Matthew. Again, I just talked to Luke and saw what he was like as a person. We then did some improv and scene readings. He was truly incredible, so natural, likeable, and intelligent beyond his age. Matthew, Luke’s father, who is also an actor, was a great help, as I was able to say to Matthew, for example, that he, not Luke, should watch Cries and Whispers by Ingmar Bergman, and see how Harriet Andersson in that film writhes in pain from her cancer, and then try to convey to Luke the kind of emotional and physical performance that I want. So by the time Luke came to set he was very prepared and it was much easier for me to direct him as we had a base to build upon. Added to this, Luke and Andi instantly bonded and spent a lot of time together before the filming began.

Ivan Kavanagh: Most memorable moment was filming the whole pimp sequence at that incredible motel location and on John Leslie’s, my production designer’s, incredible set. That whole sequence, in my opinion, is one of the best things I ever did as a filmmaker, and is one of the closest to being exactly as I had imagined it when I wrote it, every sound, shot, performance and colour.

While making Son, were you influenced or inspired by any other movies, TV shows, or books about cults?

Ivan Kavanagh: Not really. I don’t need inspiration when it comes to nightmares and fears. I have enough for everyone, which goes into my movies.

Ultimately, what do you hope viewers take away from this film?

Ivan Kavanagh: I hope they come away with images and sounds that they can’t quite shake. Like a nightmare that you’ve had. Whether they love it or hate it, I’d like the film to affect them emotionally in some way. I tried to make something that was very visceral and purely cinematic, to create a world unique to this film from the ground up, to make a film dripping with atmosphere. If that’s all they take from it, or a fraction of that, I’d be happy. I also hope that people take the time to rewatch it, as, like The Canal, I think it really needs to be seen more than once and does not give up all of its secret on first viewing.

What has it been like to partner with RLJE Films and Shudder to release Son?

Ivan Kavanagh: They were amazing. They know horror and have a love of horror and I felt the film was in safe hands right from the beginning. Also, and this may or may not surprise you, this was the first film that I have made that I have had any sort of approval or meaningful say in the poster and trailer and I am so happy with what they did with both. In my opinion, the US poster of The Canal was totally wrong for the film and harmed its initial release, but it was used despite my objections back in 2014. RLJE Films and Shudder have been a joy to work with, being incredibly supportive of me and the film, and I would jump at the chance to work with them again.

With Son now in theaters and on Digital and VOD, what other projects do you have coming up that you’re excited about, and where can our readers go online to keep up to date on your films?

Ivan Kavanagh: I have just finished a script with the crime novelist Jon Bassoff called Vengeance that I am excited about. It’s a violent neo-noir and very cinematic, I think. And I have a few horror projects in the works as well. I’m not on any social media at the moment. I was on Twitter a couple of years ago, but I found it too distracting from my work. But people usually have no problem finding me when they want to.

SON is available In Theaters, On Demand and Digital 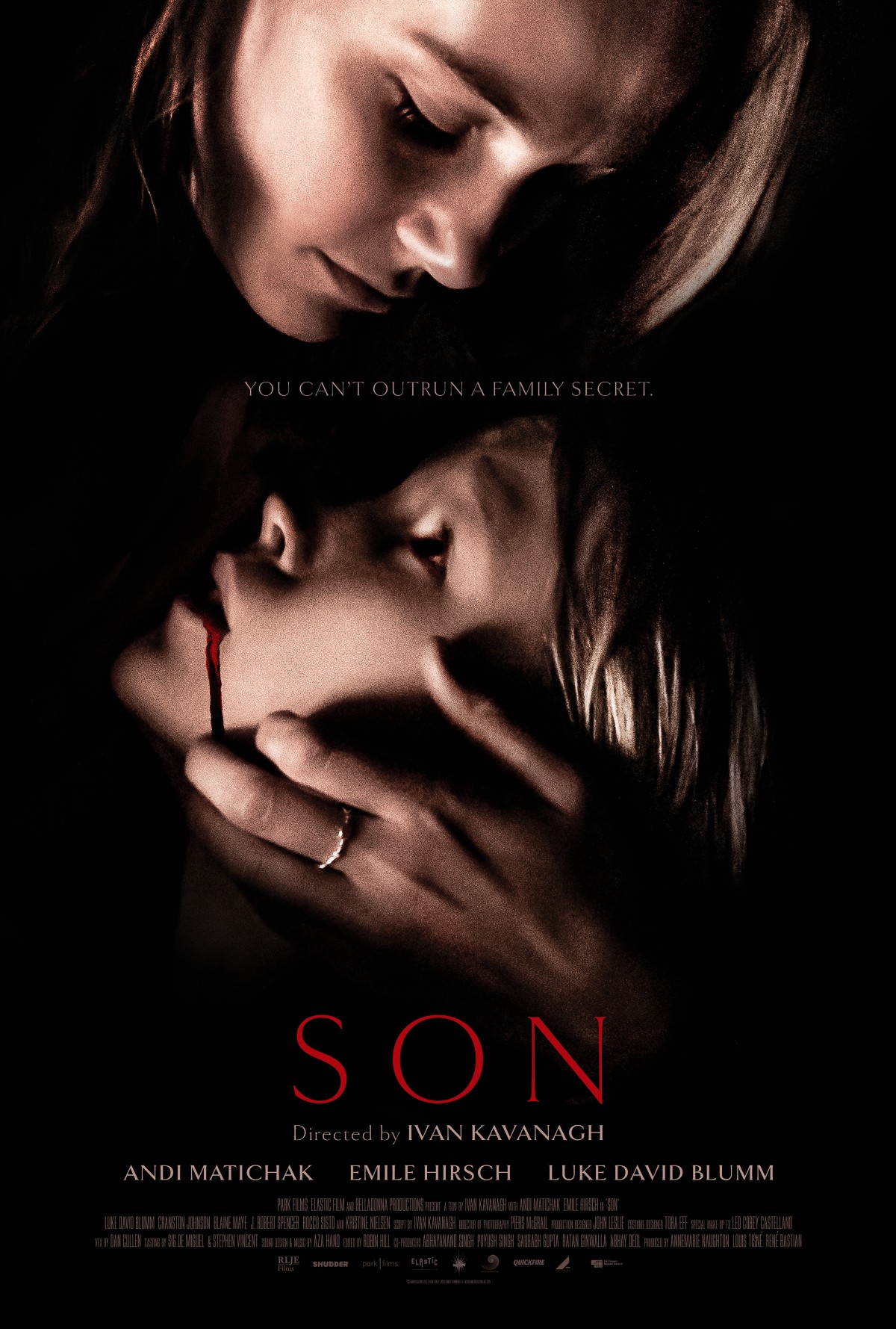