A young woman faces off against serial killer H.H. Holmes in 1890s Chicago in Bryce Moore's historical fiction book The Perfect Place to Die, and ahead of the novel's August 3rd release from Sourcebooks, we've been provided with an exclusive excerpt to share with Daily Dead readers.

You can read the official synopsis and our exclusive excerpt below, and to learn more about The Perfect Place to Die, visit Amazon!

Synopsis: "Stalking Jack the Ripper meets Devil in the White City in this terrifying historical fiction debut about one of the world's most notorious serial killers.

In order to save her sister, Zuretta takes a job at an infamous house of horrors―but she might never escape.

Zuretta never thought she'd encounter a monster. She had resigned herself to a quiet life in Utah. But when her younger sister, Ruby, travels to Chicago during the World's Fair, and disappears, Zuretta leaves home to find her.

But 1890s Chicago is more dangerous and chaotic than she imagined. She doesn't know where to start until she learns of her sister's last place of employment...a mysterious hotel known as The Castle.

Zuretta takes a job there hoping to learn more. And before long she realizes the hotel isn't what it seems. Women disappear at an alarming rate, she hears crying from the walls, and terrifying whispers follow her at night. In the end, she finds herself up against one of the most infamous mass murderers in American history―and his custom-built death trap.

With real, terrifying quotes in front of each chapter, strong female characters, and unbearable suspense, The Perfect Place to Die is perfect for fans of true crime, horror, and the Stalking Jack the Ripper series."

Excerpt from THE PERFECT PLACE TO DIE:

Three things happened at once. The first was that I realized I was completely turned around and lost. The second, which compounded the first, was I whirled too quickly for my candle, and it blew out, leaving a faint puff of smoke trailing in the air.

The third, and most definitely most important fact, was that I glimpsed a body in that instant when I whirled and the candle went out. A man standing at the far end of the hall, facing away from me.

I was lost in the dark. And I was definitely not alone.

I froze, willing myself to stop breathing, even though it was impossible. My heart was pounding too quickly, and I couldn’t just stand there holding my breath. I would pass out, only to find myself trapped in a room of my own when I awakened, no doubt. If I ever were to awaken.

Because, while the man might have been nothing more than a hotel guest alarmed by the noise of a woman’s footsteps madly dashing by his room in the middle of the night, what had he been doing, standing in that corridor, still as a stone, facing away from the sound of the noise?

And without a candle of his own to light the way?

He might not have seen me in that instant before darkness fell, but he must have seen the light of the candle. He knew I was there.

I backed up until my shoulders touched a wall, my feet making no noise whatsoever, though that was hardly any comfort, for it simply reminded me that he would make no noise, either. If it were the kidnapper or the murderer, then he knew this floor far better than I could. It would be like me walking through my house back in Manti at night, where I knew the placement of each chair and table whereas a stranger would bump into all of them with every step.

Someone spoke in the darkness. A harsh whisper that carried easily through the air but didn’t betray anything of the speaker’s actual voice. No accent that might give me a clue. No peculiar manner of speech that might give him away. It was as if the whisperer were deliberately removing any trace of that from his voice. “I know you’re there,” he said. “I know you’ve been looking for me.”

It gave me a general idea where he was, at least: still in front of me. Only then did I remember the knife I always kept strapped to my thigh. I raised my skirt, reached down and unsheathed it, though it did little to calm my nerves. I had no training with it, after all, and I’d never considered I might be fighting blind. I edged to my right, sidling along the wall and hoping I would come to a doorframe soon. Anywhere other than here would be a safer place for me.

“You must be Ruby’s sister,” the whisper said. “I could see that in your face the moment I first saw you.”

Could that be Pitezel? Yes it could. But it could also be Mr. Holmes, could it not, or the mysterious Mr. Reynolds? What about Hans the barber, or Gustavo? Just because I was not overly familiar with the person didn’t mean they were exempt from suspicion.

I kept edging sideways until I hit a second wall. I was in a corner, trapped.

“Do you know what I did to your sister?” The whisper was closer to me. Not ten feet away, and straight in front. He must be standing in the middle of the hall, blocking any exit I might take. I fumbled forward with my right hand, feeling the wall for anything that might give me a different escape. Not two feet away, I felt the opening of a doorframe.

“I could show you,” the voice whispered. “She didn’t go quietly, I’m afraid. Your sister was a screamer. But screaming won’t help you in the Castle.”

At last I found the doorknob. It squealed slightly as I turned it, but as I pushed inward, it stayed fast. Locked.

The whisper laughed. “Not locked. That one doesn’t go anywhere, though I applaud you for trying to get away.”

So he knew exactly where I was and what I was doing. What was the point in hiding?

“Scream, and I’ll kill you right now,” he whispered, anticipating my thoughts. “I have a knife, and more than enough experience to know where to put it, darkness or no. There is a room right next to us. I could whirl your body in there before anyone else arrived. No one would be the wiser. Half this floor is empty this evening. Don’t test me.”

“What do you want?” I asked, the words stumbling out of my mouth. My hand began to cramp around the knife’s handle. I was gripping it too tightly.

“I’ve never been chased before,” came the reply. “It’s invigorating. What would you do if you found me? I think I might continue to allow you your search. But I didn’t want you to think you were unobserved. I can stop you whenever I want. Reach out and slice you like I’m gutting a fish.”

At this, something whipped through the air to my left. It tugged on my blouse, and a blossom of pain spread out on my arm. Had he cut me, or was that my imagination? Panic took over. There was no way to know if the voice meant what he said, or if he were stringing me along until he felt like cutting my throat.

I would not become another corpse. Not without a struggle.

Putting my head down, I barreled forward, one hand held out to ward me against any walls I might run into in my blindness, the other slashing back and forth through the air with my blade.

The man gasped as he heard my steps thundering forward. I ran into him, flailing my arms and legs, trying to connect with anything vulnerable. I knew my blows had strength behind them, for I had years of work on the farm. My finger got caught in his suspender button on his trousers, and I thrashed to get loose, ripping it off in the process. The knife, on the other hand, did no good whatsoever. The man blocked my first blow, making my wrist go numb. I only managed to hold onto the knife through luck.

Whether I managed to strike him in earnest or he simply let me go, somehow I was beyond his body, and I hurried onward, crashing into a wall and careening to my left, where I tripped over something and slammed into the floor. The voice’s claim that half the floor was empty must have been true. No lights came on. No one called out to ask what the commotion was.

I could have sworn I heard footsteps behind me, slow and methodical, approaching me even now. I scrambled back to my feet and continued forward, limping now but still desperate to get to anything that might be considered safety.

“Help!” I called out, as if the whisper had held my voice in check until now, when I realized I was beyond him and might have hope of escaping. But my cry was swallowed by the darkness, and for a moment I was back in the safe in my dream, captured and clawing to get out, with no one to hear my cries. 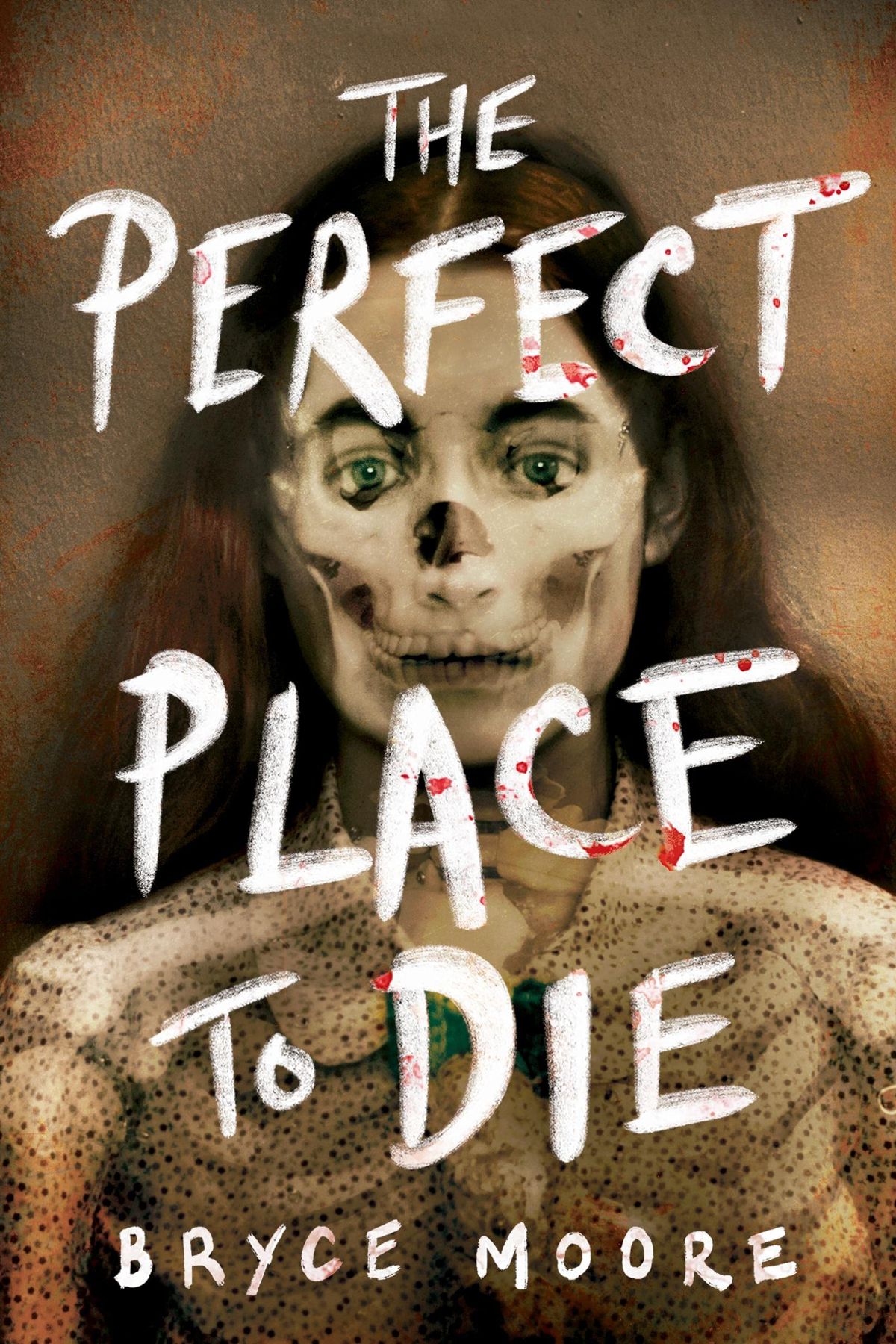