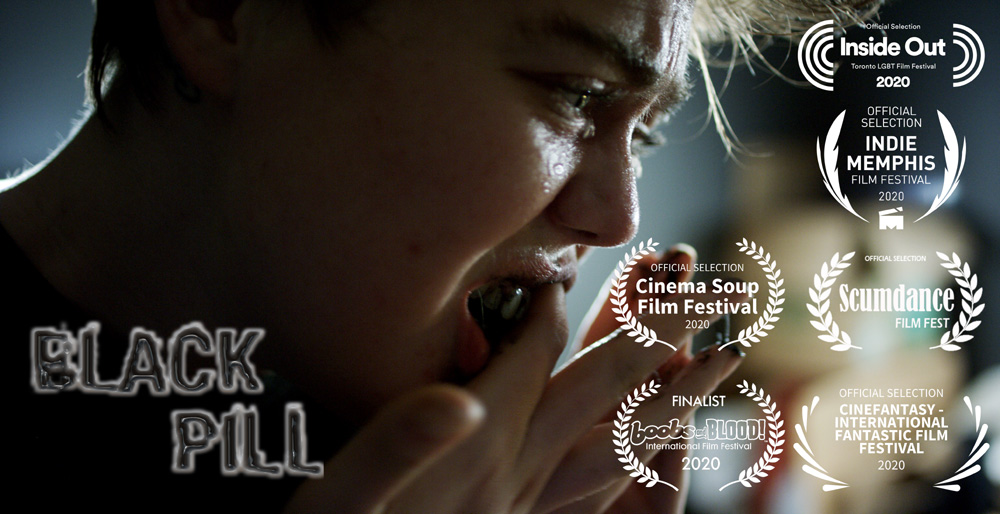 In Jessi Gaston's writing and directorial debut, Black Pill is a horror/ science fiction short film set in the near future that follows a trans individual named Ven who―tortured by constant inner turmoil―decides to purchase a package of pills from a seedy company off the dark web.

In the opening scene, we see Ven watching a video, I assume from the company Ven bought the pills from, explaining what they will do. Ven feels out of options and turns to this untitled company for a resolution, but I hoped that Ven wouldn't take the pills. With the sense of uncertainty and dread for Ven now living in my mind, I couldn't help but notice that I was gradually being immersed in this world. Jason Chiu's direction of photography is stunning. The visuals are soaked in a dark yet yellowish hue, and it helped to place me in Ven's emotional state. Not to mention, there are these extreme tight shots of Ven's sweat-filled face so that you can't hide from anything that you are watching.

The company promises to permanently separate the customer from their humanity, or as the person in the video puts it, "You won't be you or anyone at all." This person almost feels like a destructive voice in Ven's head―representing the darkest thoughts. I won't tell our readers what Ven ultimately decides to do, but it left me wishing that this short film would turn into a feature because I have so many unanswered questions. Believe me when I say that that is a compliment. I think Gaston intends to leave the audience wanting to dig deeper―especially into the film's overall messaging.

It wasn't until I watched Black Pill for a second time that I focused on the conversation between two unnamed characters watching Ven decide whether or not to take the pills. These characters edit the videos of people's transformations for the company. One character tries to "other" Ven by using the word "they" to describe Ven, while the other character uses the proper pronoun only to shortly cave to slight pressure and use the word "they" as well. "Don't fool yourself into thinking that they are like us. None of them are anything like us." Then, after the fourth watch, it is a little hard to hear, but I picked up on this line from one of the characters: "You know we are not better, right? We are just unforgivable degenerates in it for the money."

And I still haven't told you everything that goes on in this 10-minute short film. It really is incredible how much and how little story is packed in Black Pill. Now, do you see why I said that I have so many unanswered questions?

I can't wrap up my thoughts on this short without addressing the grimy score peppered throughout the film. If the wobbles from Irene and Seulgi's―two of the five members in the pop/R&B group Red Velvet―song "Monster" had a baby with any song from Nine Inch Nails' album Year Zero, it would sound akin to Black Pill's score. It adds an extra sheen on what is already an unsettling experience.

I am very glad that I had the chance to experience Jessi Gaston's Black Pill. While I'd love to see this as a feature-length film, I look forward to seeing the short again to see if I can pick up on any more information that I missed during the last four watches.

Black Pill is currently playing on the festival circuit. It just finished its run at Inside Out Toronto, and it will have a virtual screening at Indie Memphis Film Festival starting from October 21st to October 29th.

Indie Memphis Film Festival for tickets and other information: https://www.indiememphis.org/2020-festival