Facing off against a force of unfathomable evil is hard enough to do on its own, but doing it on an airplane adds a whole other layer of deadly difficulties (especially when that seatbelt light keeps coming on). That's precisely the setting for an unconventional showdown between a demon and Father Romero (Robert Miano) in Chad Ferrin's new horror comedy Exorcism at 60,000 Feet (starring Lance Henriksen, Bill Moseley, and Adrienne Barbeau), and we've been provided with the film's official trailer ahead of its May 5th release on Blu-ray / DVD, Digital, and VOD from Scream Factory:

Starring genre favorites Bai Ling (Dead Ringer), Lance Henriksen (Aliens, Pumpkinhead), Bill Moseley (The Devil’s Rejects), and Adrienne Barbeau (The Fog, Swamp Thing), Exorcism at 60,000 Feet is available as a Blu-ray +DVD Combo Pack, digital download, and On Demand. The release also includes a number of bonus features, including the featurette Behind the Screams of Exorcism At 60,000 Feet, A Cast to Die For featurette, Pookie The Wonder Dog’s Guide to Practical Effects, cast and crew interviews, and more! Fans can pre-order their copies now by visiting ShoutFactory.com

We all know that air travel can be hell – but on the last flight of a transatlantic passenger airliner, things turn positively demonic when a swarm of infernal possessions breaks out, spreading from passenger to passenger … and eventually to the pilot. In order to land safely and survive, a priest, a rabbi, and the surviving crew must band together against the most ungodly turbulence imaginable. Exorcism At 60,000 Feet will have you screaming in the aisles … but remember: in case of an emergency landing, please keep your tray tables – and crucifixes – in the upright position at all times! 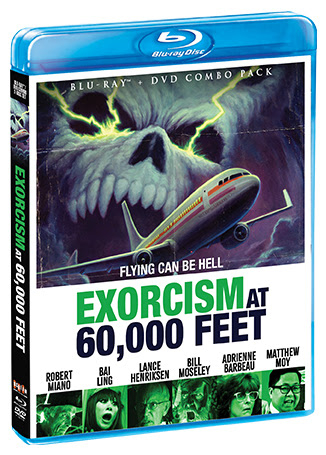