A film I’ve talked about ad nauseam for like decades now, Fred Walton’s April Fool’s Day has been a favorite of mine ever since I discovered it on VHS during the summer of 1987 (you can read all three parts of my 30th anniversary retrospective series HERE, HERE, and HERE).

[Spoiler warning if you haven't seen April Fool's Day.] To me, it’s always been the perfect anti-slasher, where no one in the film really dies (unless you count the film’s missing ending), and instead leans into the whodunit aspects that are driving the mystery of just who exactly is terrorizing Muffy St. John (played by Deborah Foreman) and her friends during what’s supposed to be their idyllic lakeside weekend away from the stresses of college life.

What it may lack in an official body count, April Fool’s Day more than makes up for with its whip-smart script, charismatic performances, and a whopper of an ending that I certainly wasn’t expecting at all the first time I saw it. Plus, I feel like it’s a film that really rewards with multiple viewings, as it gives you a chance to pick up on all the little narrative bread crumbs that screenwriter Danilo Bach has scattered throughout the story along the way.

As the proverbial puppet master of April Fool’s Day, Foreman is an absolute delight and she rises to the occasion when handling the challenges of what is required of her performance here (I’m being coy for anyone out there who maybe hasn’t seen this just yet). Just as great as Foreman are the other cast members who make up the rest of the ensemble: Clayton Rohner, Deborah Goodrich, Thomas F. Wilson, Ken Olandt, Leah Pinsent, and Griffin O’Neal, and especially Amy Steel, who becomes a force of nature as she finds herself directly caught up in all the shenanigans of April Fool’s Day.

As mentioned, I’m a pretty huge fan of AFD, so I’ve had the DVD for decades now, and I’ve also heavily relied on the HD version of the film that I bought off Vudu years ago, so I am pretty stoked to get my hands on a proper physical release of Walton’s horror comedy on Blu-ray after all this time. It’s a movie that has definitely found its fans over the decades, but I do hope this helps with April Fool’s Day finally getting its due as one of the most inventive genre comedies to come out of the 1980s.

The transfer on the Collector’s Edition Blu is absolutely stunning, and is a major upgrade (obviously) from my DVD from the early 2000s that I’ve practically worn out (it even looks better than the file I have on Vudu, too, as the image is way sharper and the colors are much more vibrant here as well). The clarity is astounding, particularly in many of the low-lit scenes later on in the film, and the sound mix is absolutely spot-on as well.

In terms of the special features, I feel like a bit of a Negative Nelly here because I definitely do appreciate what was included with this release of April Fool’s Day, but at the same time, I am just not a fan of the format in which these featurettes are presented here. It really comes down to the fact that, maybe it’s me just being a nitpicky nerd, but I am not a fan at all of the interstitial cards between answers, which seems to be the format as of late for Scream Factory’s supplemental materials. Also, it feels like the B-roll from the movie that was utilized in these mini docs was encoded improperly because there were quite a few stutters in that footage in the various featurettes, which was a little distracting to say the least.

The first of the special feature interviews is a two-parter with director Fred Walton talking about his roots and how he ended up in Los Angeles looking to be a writer. He also talked about his experiences at Denison University, and the genesis of his other seminal genre film, When A Stranger Calls, and how he came to realize that its roots began in urban legend mythology. He also discussed how he had made a short film as a proof of concept for Stranger and after he made the feature, it was sold to Columbia Pictures. Walton also discussed his involvement with Alfred Hitchcock Presents and Universal television in the 1980s and how that ultimately put him onto the path of meeting Frank Mancuso Jr., who was looking for a director for April Fool’s Day.

In the second part of the interview with Walton, he discussed how he had wanted to make a sports movie after Stranger, which became Hadley’s Rebellion. At the time he was putting that project together, his agents at ICM were also working with Griffin O’Neal, who was 17 at the time, and they set up a meeting between them. Apparently, Griffin was a bit of a jerk, but they ended up collaborating on Hadley’s Rebellion, which ultimately led to him being cast in April Fool’s Day (Fred was the one who suggested Griffin to Mancuso Jr.). Walton also discussed how he originally didn’t think Deborah Foreman was right for Muffy, even though he liked her work, but she ended up proving him wrong. He also chatted about funny guy Tom Wilson (who liked to do comedic improv while filming), the scene in the kitchen with the sex survey, the snake scene with Arch, and how the studio mishandled the misleading marketing of April Fool’s Day as a slasher film. This would have been a perfect opportunity to hear from Walton about AFD’s original, much darker ending which involved Skip killing Muffy for her inheritance after everyone else leaves the house, but the topic sadly was never brought up.

The interview with Deborah Goodrich starts off with her talking about her dancing background that led her to moving to New York and ultimately pursuing a career in acting. She talked about smaller gigs doing bacon-flavored Cheetos commercials and when she was on All My Children opposite Susan Lucci, as well as a pilot she did with Christopher Lloyd that never got picked up. Goodrich also discusses making the move to the West coast, and how her taking a friend to an audition led to her being cast in Just One of the Guys. Deborah also mentions the kitchen scene from April Fool’s Day and goes into the challenges about shooting the well scene and the alternate ending involving the rest of Muffy’s friends planning to play a prank on her to get back at Foreman’s character in the end.

For Clayton Rohner’s interview, he discussed how his dad had worked for CBS in the legal department before he got started in the industry, and how he had wanted to do something very Hemingway-esque instead of becoming an actor, but eventually took to the performing arts. Rohner also talked about working with Fred and how loose he was as a director and the fact that everyone had fun together on set. He commended Frank Mancuso Jr. for hiring his sister to do the wardrobe on April Fool’s Day, which gave the characters so many iconic, pure ’80s fashion looks, but there is a really weird flash cut at the start of the on location section in this featurette, which was a bit jarring.

The next interview on this release was with legendary composer Charles Bernstein, who dove into his start in music, talking about how his mom, who lived to 101 and played piano to the end, used to play for silent movies and would compose for those films, so he came about his career honestly. He also chatted about how he worked on an Oscar-winning documentary and cut his teeth on films like White Lightning and Steel Cowboy. Bernstein also reminisced about working with Wes Craven on A Nightmare on Elm Street and Deadly Friend and how he didn’t necessarily see himself as a horror composer initially, but has grown into the moniker. Bernstein also talked about the joyous experience he had collaborating with both Fred and Frank and how he was in heaven while working with them. Charles also chatted about how John Straus, who did the brilliant score for Amadeus, did the temp track for AFD, utilizing Béla Bartók’s “Music for Strings, Percussion and Celesta,” and how he realized that he couldn’t “out Bartók, Bartók,” so he came up with a music style that kinda winks at you. Bernstein also revealed that the challenge for him on April Fool’s Day was setting the right tone, where it had to justify the film, since it was an odd one-off that didn’t have a traditional style.

The final interview on this Collector’s Edition of April Fool’s Day featured cinematographer Charles Minsky, and since he’s someone I have never had the chance to chat with, it was the one I was most excited about. Only about six minutes of the 17-minute running time of the featurette was devoted to his involvement on AFD, and he talked about the trick of shooting the death scenes realistically even though no one dies in the film, his experiences collaborating with Fred Walton, and he dug into the ferry accident scene as well. I loved hearing about his prior experiences before he started off in the industry, but I would have loved more about his actual time shooting April Fool’s Day, especially since so many of the scenes take place during daylight, and it can be hard to visually ratchet up tension when you’re working in full-blown sunlight (but he pulls it off here rather well).

But as a whole, though, Scream Factory definitely put some love into this Collector’s Edition of April Fool’s Day, and while I would have loved to see a bit more by way of special features (especially when it came to hearing from more of the cast), there’s still a lot to appreciate about this Blu (especially the gorgeous transfer), and I’m thankful Walton’s classic horror comedy has finally been shown the appreciation it so rightfully deserves. 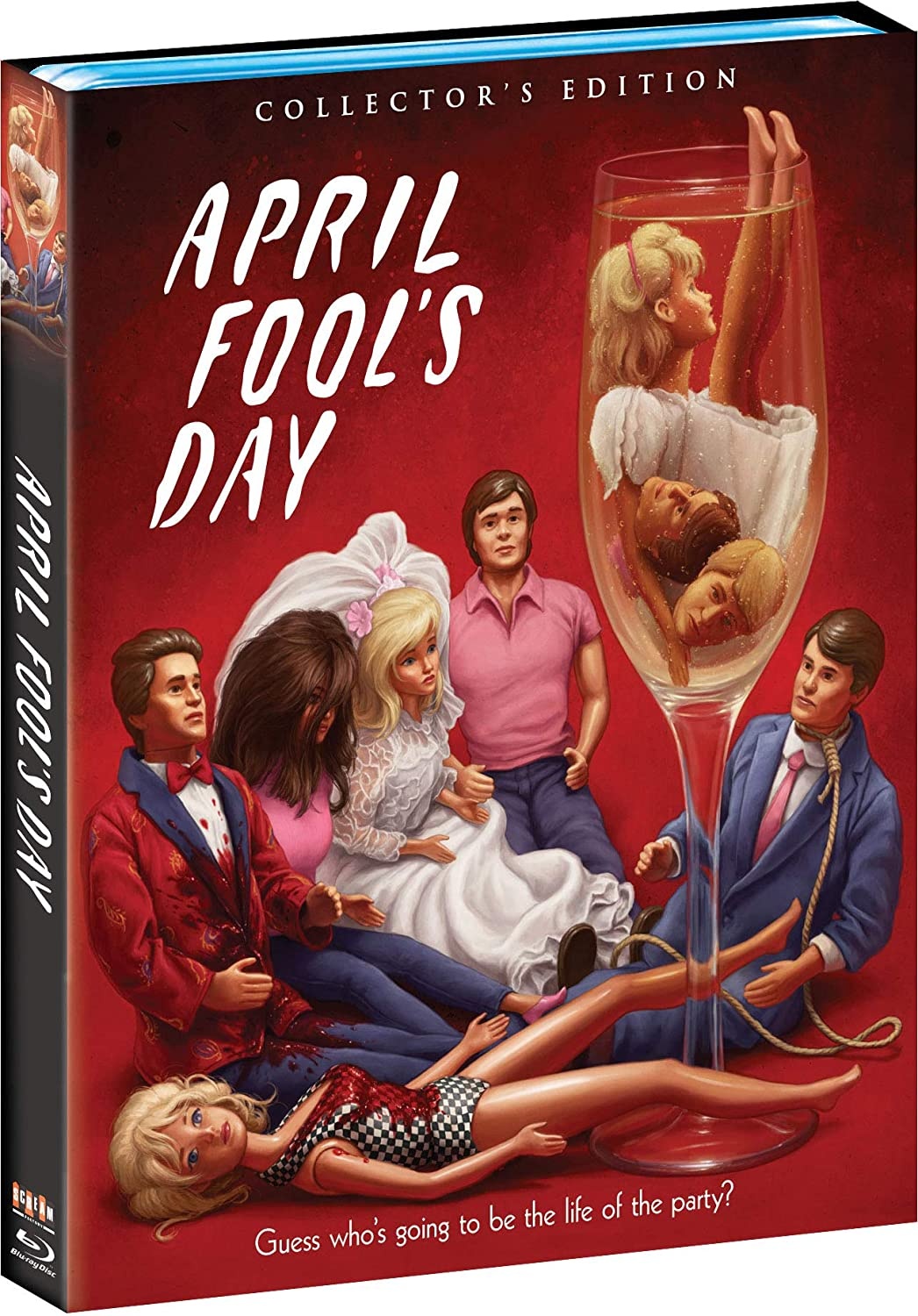