As someone who has been a huge fan of Event Horizon ever since it was released in 1997, I’m always on board for anything that celebrates this audacious, terrifying, and grotesquely beautiful exercise in cosmic horror. Written by Philip Eisner and directed by (my boy) Paul W.S. Anderson (who was still just Paul Anderson at this stage in his career), there’s no denying that Event Horizon wears its influences proudly on its blood-stained sleeve, but there’s something about how Eisner approached those homages he works into his script (Lovecraft, Clive Barker, and Shirley Jackson being the big three) that felt unusual and thought-provoking at the time the film was hitting the big screen during the summer of that year. And I’d be so bold as to say that even now, Event Horizon feels like a once-in-a-lifetime cinematic excursion in sci-fi and pure, unfiltered horror that rarely ever comes along out of the studio system.

So when I heard the news that Scream Factory was going to be celebrating the film with a brand new Collector’s Edition Blu-ray, that announcement made me so happy, I was ready to gouge my eyes out in delight. I then quickly realized such an act would be counterproductive because even though you don’t need eyes while traveling aboard the titular ship (at least, according to Sam Neill), you certainly do need them to experience the film on your television, so I settled myself down right quick.

Well, now that I got my awkward joke out of the way, here’s a bit of a rundown on Event Horizon for the uninitiated: the film follows a space crew in the year 2047 who are tasked with traveling to the titular ship which had disappeared some seven years prior, and finally resurfaced near Neptune, emitting a mysterious distress signal that seems to have some Latin phrasing embedded into it as well. This search & rescue team is led by Captain Miller (Laurence Fishburne), and other members of the crew include Lieutenant Starck (Joely Richardson), medical technician Peters (Kathleen Quinlan), rescue technician Cooper (Richard T. Jones), the ship’s doctor, D.J. (Jason Isaacs), pilot and navigator Smith (Sean Pertwee), and chief engineer Justin (Jack Noseworthy), who everyone affectionately refers to as “Baby Bear.” Also joining the crew is scientist Dr. William Weir (Sam Neill), who designed the Event Horizon ship, and has been brought along to take stock of the state of the vessel to determine just what exactly happened to it and the crew that used to be at its helm.

But once they arrive and board the Event Horizon, it’s clear that something very wrong has taken place aboard the now-abandoned spacecraft, and if Lewis cannot get his crew off the the seemingly “alive” vessel before it's too late, they will all become part of the ship’s hellish legacy that extends far beyond the natural space-time continuum.

The thing that I always appreciated about Event Horizon is how wildly provocative it is, especially considering the time in which it was released. Sure, we were seeing quite a few more studio-backed horror films hitting theaters after the success of Scream just a year prior, but nothing felt quite as nasty, as unsettling, nor as nightmare-inducing as Event Horizon, which I mean as a huge compliment to both Eisner and Anderson, as well as everyone else involved in its production. And this is in reference to the original cut of the film, too. I can only imagine what horrors were contained in the deleted footage (and I guess I’ll be left wondering for the rest of my days, too, since that stuff seems to be lost forever now). But even though Anderson had only four weeks to finish the film, which meant a few hasty decisions were made (his words, not mine), and then eventually they had to do some additional snips after a test screening, there is still so much about Event Horizon that kicks all kinds of ass in this “safer” version, that I can’t help but applaud the fact that the film still exists and still manages to push boundaries the way that it does here—especially coming out of a major studio to boot.

Between the religious iconography utilized aboard the titular spacecraft (and the fact that every single nook and cranny of that ship also looks like it’s designed to inflict a lot of pain certainly ups the creepy factor as well), the shockingly visceral gore, and several tension-filled set pieces that still manage to crawl up under my skin after all these years (the “Baby Bear” air lock sequence shreds my nerves with every revisit, my god), for as much as I absolutely adore Anderson’s work on the Resident Evil films (and last year’s Monster Hunter as well), I would really love to see him working in this more hardened horror/sci-fi space, because his affection for this kind of gutsy material is evident throughout Event Horizon. Also, the film works as well as it does for me because of the top-notch ensemble, and Sam Neill proves here that no one else out there quite does “unhinged” like he does (Possession, In the Mouth of Madness, and Event Horizon would make for a killer triple feature).

As far as this new presentation of the film goes, the 4K scan of Event Horizon is a huge upgrade from the previous Blu-ray release, as the images here look much more crisp and clean than they had before, and there are only a few shots that still have a bit of softness to them, but that is totally forgivable because those usually involved a variety of CGI shots. I’m not sure if the audio mix had been upgraded as well, but we did a back-to-back viewing with both Blu-rays, and the Scream Factory disc seemed like it had a much better mix to it as a whole.

Now, here’s where things get tricky. This Collector’s Edition Blu boasts an array of brand new interviews, but they suffer from my main issue with Scream Factory’s special features these days—they’re all so choppy and short, and the quality is a bit messy and all over the place. The consistent use of the flash edit is distracting, there were quite a few questionable editing choices made in many of these featurettes beyond that (including a quality-related card at the beginning of the Jack Noseworthy interview that was meant to explain the technical difficulties they had during the interview, but it flashes on the screen for about three frames, making it nearly impossible to read unless you happen to catch it), plus the continued reusing of the same B-roll footage and stills over and over ends up feeling very repetitive by the time you settle in for those later interviews. In my mind, some of these problems could be addressed by editing together all these talking head segments into one cohesive mini-doc that celebrates the legacy of Event Horizon, which would help hide some of those very evident seams as a whole.

The interviews with both Paul W.S. Anderson and Philip Eisner are probably the best of the new featurettes, though, but both are extremely brief discussions and really could have gone much deeper, considering the thematic elements at the heart of Event Horizon and the unabashed ambition that is on the screen in nearly every single frame of the film. As mentioned, there were some major tech issues during the Jack Noseworthy interview that made me wish they had gone back and tried again because it was extremely distracting, and I definitely could have used another 20 minutes or so with the film’s production designer, Joseph Bennett, because there’s so much that wasn’t discussed, either.

The Collector’s Edition also includes a commentary track with Anderson and Jeremy Bolt as well as a handful of other supplemental materials that were ported over from the previous iteration of the Blu, so if you’ve never had a chance to watch those, I highly recommend spending the time with those featurettes and the commentary as well if you’re also a fan of the film. I don’t think it’s hyperbolic to call this an essential addition to your home media collections if you enjoy Event Horizon, as the 4K scan alone makes this well worth owning. But as someone who is a huge Event Horizon fan, I was left pretty disappointed by all the new special features, which do very little to give Anderson’s film the proper due it so rightfully deserves. 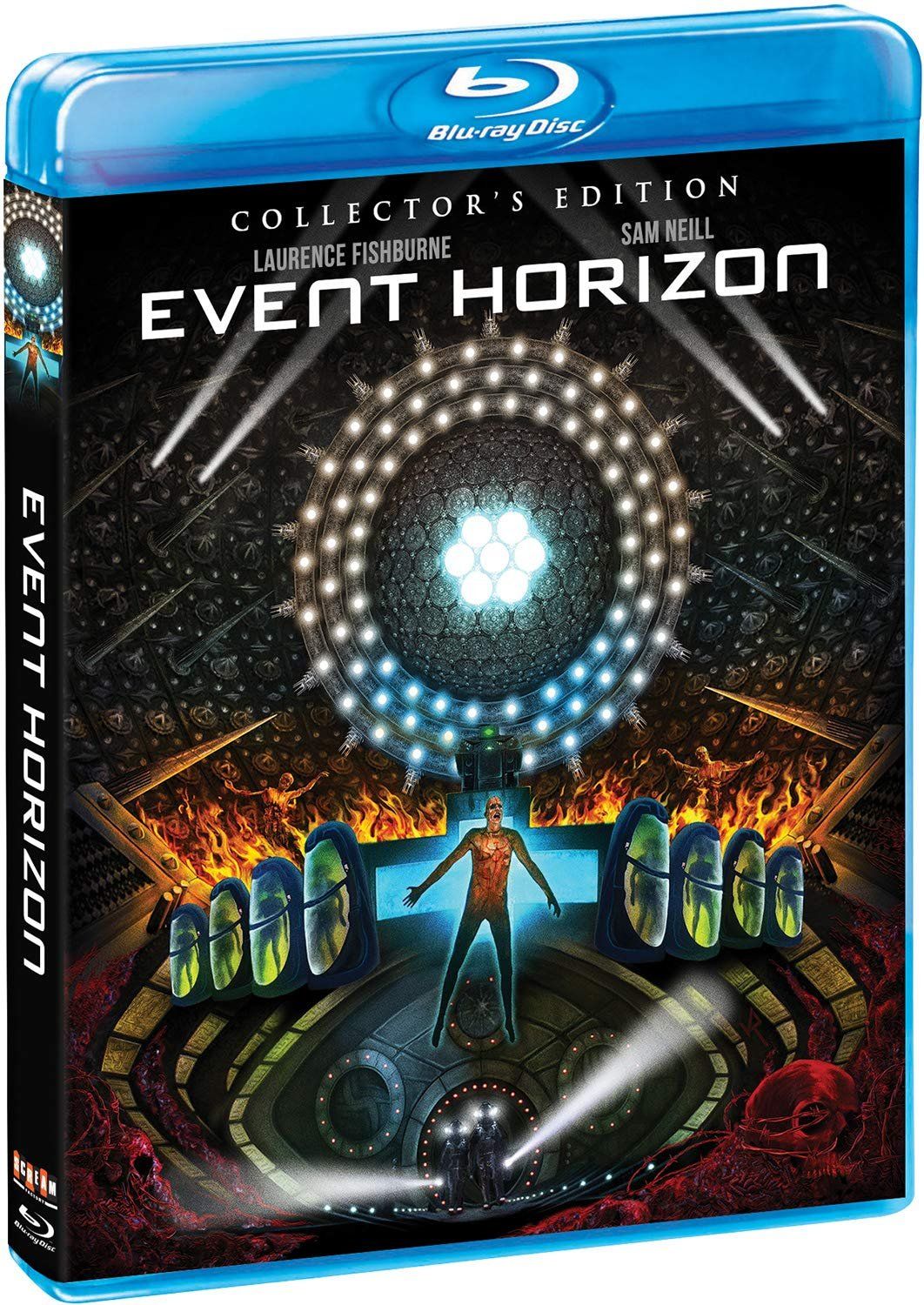 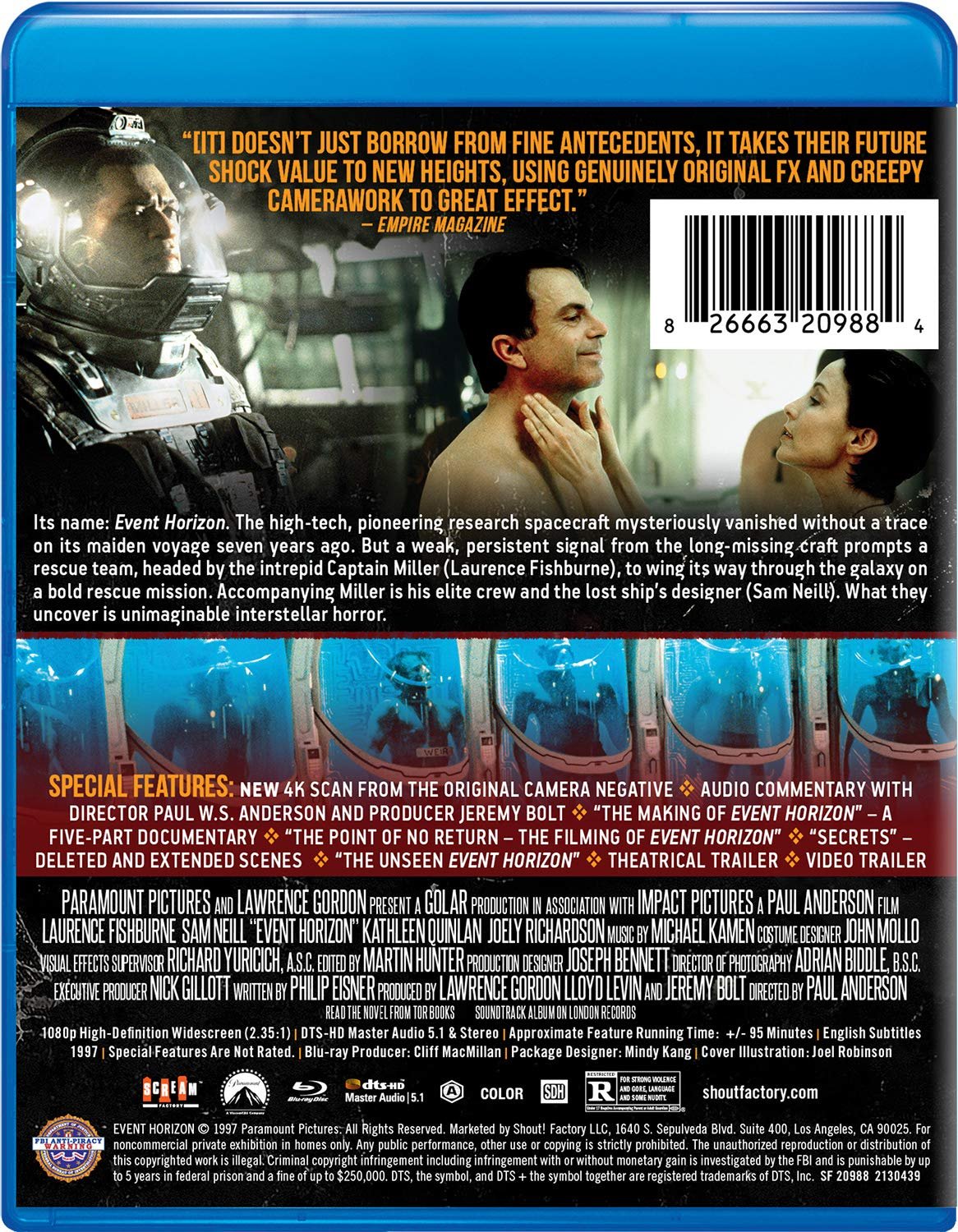