‘Never give up’ is a mantra we often apply to most facets of life, and rightly so. (The exception should always be watching the Witchcraft films; and one should pull that parachute early.) Jeremy Kasten’s The Attic Expeditions (2001) is a film that chased that dubious Hollywood rainbow and actually found the gold: a completed movie. Not a coherent one—by design—but completed. And it’s kind of a pip. Now Severin Films has put out this aughts curiosity with some fun extras and a solid transfer to boot. Let’s get crazy, shall we?

A Satanic ritual, a stabbing, an asylum. Welcome to the mind of one Trevor Blackburn (Andras Jones - A Nightmare on Elm Street 4: The Dream Master), the latest patient at a facility for the criminally insane, run by Dr. Ek (Jeffrey Combs - Re-Animator). It seems that Trevor murdered his fiancé, Faith (Beth Bates - Crossfire), in a rite gone awry, but has no memory of it or who he even is for that matter. Acting as our moral compass is Dr. Coffee (Ted Raimi - Skinner), visiting the institute to observe Ek and his prize patient.

His only patient, actually; Ek sends Trevor to a recovery home called House of Love, run by the chilly Dr. Thalama (Wendy Robie - The People Under the Stairs) and filled with colorful characters, like the man who talks through a hand puppet or the wiry hanger-on Douglas (Seth Green - Idle Hands), who won’t leave Trevor alone. Then there’s Amy (Shannon Hart Cleary - The Thirst), the sex (and blame)-obsessed blonde, and Liz (Nancy Wolfe - Helter Skelter), the writer who stays in her room typing because she believes she is composing the events around her. An interesting bunch to be sure, and when Trevor discovers a trunk in the attic, his—and our—journey truly begins.

The Attic Expeditions began filming in 1997, ran out of funds, and resumed shooting, finishing, and releasing in 2001. I remember seeing the box at Blockbuster back then, and strolled right on by. I had already perused a review or two in magazines; the notices weren’t great, and we’ll chalk it up to Budget Syndrome (mine, not theirs). But Severin pushes a hard bargain; far more often than not their reasoning is sound: most people missed it then, but it’s never too late to honour and preserve the arts. Especially those involving Skinemax sex scenes, scalpel surgery, and time travel (maybe). Who knows?

Kasten and writer Rogan Russell Marshall (Freezerburn) probably do, and I’m sure another viewing would open my eyes to hidden clues or motives; either that or the fractured narrative is meant to be as is, and the plot is merely an excuse to trot out some impressive visual effects, confident camerawork, and one of my favourite performances from Jeffrey Combs as the quietly sinister Ek. And this isn’t a glorified cameo; Combs is threaded within the narrative in a way that betrays the fact he was part of the late-in-the-game shooting, and is given a generous amount of screen time. As it should be. The rest of the cast ranges from decent to not so, with the exceptions of Green, who brings a lot of life and energy to Douglas, and Raimi, who holds his own with the inimitable Combs.

Okay, enough with noble intentions: is The Attic Expeditions any good? Well, I think so. It’s bright, colorful, trippy, moves fast, and has some great work from Combs, Green, and Raimi. Does it make sense? Yes. And then no, and back again. Does that matter? Not one whit. There’s more than enough confidence and style on display in The Attic Expeditions to fuel three films, and that’s something definitely worth preserving.

The features boil down to Zoom calls, but they’re a lot of fun with cast and crew reminiscing about the genesis and eventual birth of the film, and where it sits now in the horror lexicon. (I had no idea Heidecker was part of the crew!) The three features are just warm, inviting chats. Good stuff.

Wondering all these years later if that wacky flick is worth picking up? If it’s coming from Severin, the chances are it’s just what the doctor ordered. 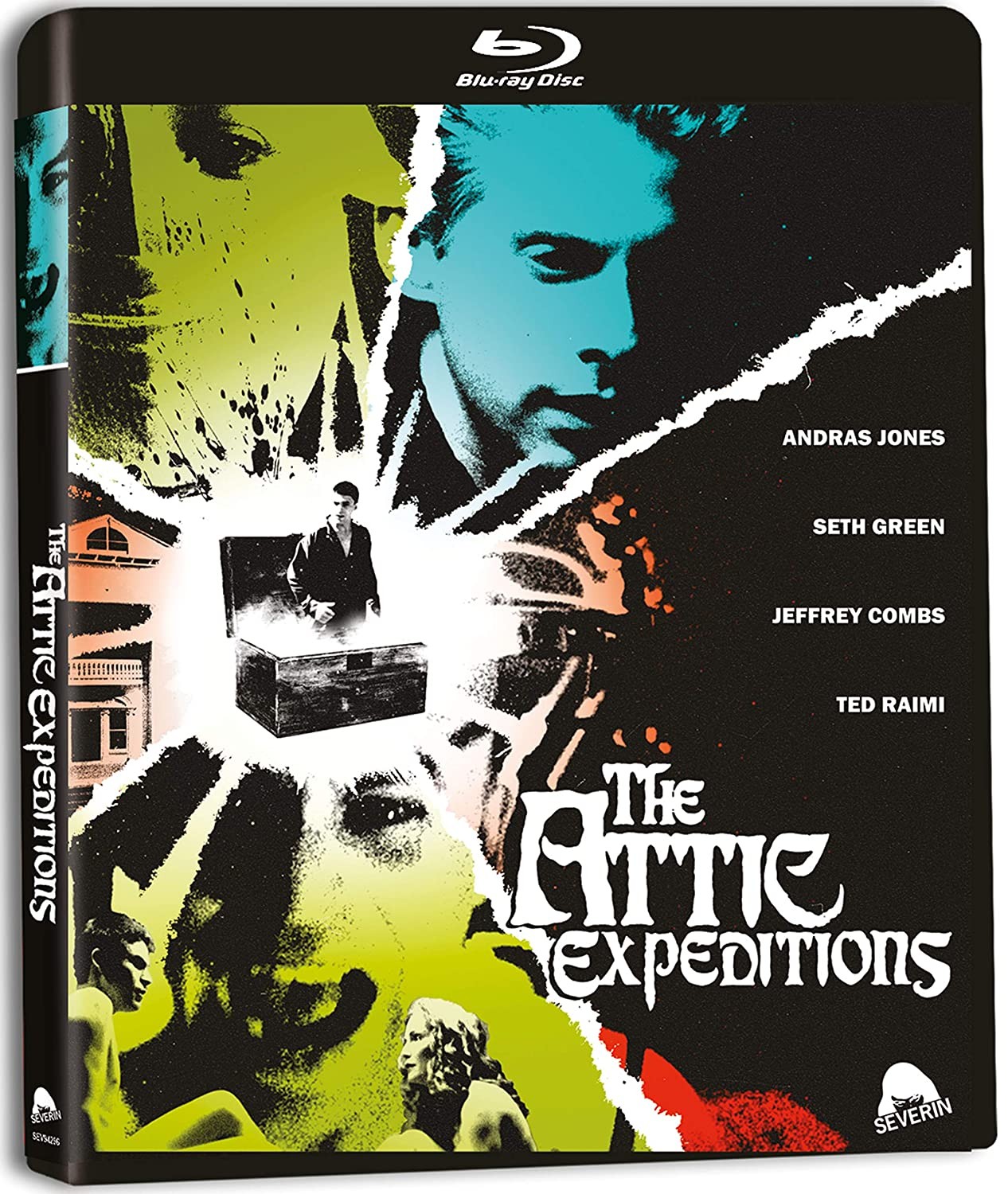