Let’s be honest: it’s been a minute since a truly great horror novel has staked its claim so unabashedly and confidently. Enter A Cosmology of Monsters. A labor of love for Alabama author Shaun Hamill, his first novel has pumped some much-needed new life into horror; effortlessly folding in fantasy elements while also not being afraid of leaning heavily into real-life horror themes scarier than any ghost. Hamill is helping usher in a new era of novelists who grew up on the works of Stephen King, Anne Rice, or H.P. Lovecraft, but also want to challenge the genre’s boundaries with what horror can say and how it’s said. Owning its horror influences proudly, there is a meta quality to Cosmology that sets it apart.

A true family saga, A Cosmology of Monsters is first and foremost grounded in multiple decades' worth of intergenerational trauma and constant loss, providing a very real window into its lasting effects and the inevitability that some families just can’t seem to escape. Set against the backdrop of their Texas family owned and operated horror attraction called The Wandering Dark, we follow the Turners as they are plagued by a mysterious unseen supernatural force for decades. Narrator and protagonist Noah Turner spends the course of the novel trying to understand who or what is plaguing his family and what he can do to bring it to an end. Little does he know the mysterious wolflike creature he befriends as a child may hold the answers to all of his questions.

Cosmology is also a novel that got a very coveted and hard to come by seal of approval from Stephen King himself, saying, “[Cosmology] brilliantly combines the mythos of H.P. Lovecraft with a contemporary story of a family under threat of destruction from supernatural forces. It succeeds because these are good, likable people that we root for; they could be our neighbors. Horror only works when we care for the people involved, and because we care for the Turners, their nightmare becomes ours.”

Shaun opens up to Daily Dead about the origins of this horror epic, his complex characters, and what he hopes Cosmology can do for horror readers.

Any book that is Stephen King approved, I’m here for. I’m sure getting that stamp of approval was amazing!

Shaun Hamill: That was, in a lot of ways, the highlight of the whole publishing process. My book publicist is friends with his book publicist and she got him sold on it and he loved it and sent it on to Stephen and he agreed to read it. The neat thing was that he was going to read it at all, even if he didn’t give it a blurb. I usually expect things to go poorly just because I don’t want to get my hopes up too much, so when we got the blurb in an email I just walked into my office, sat down on the floor, and cried a little bit.

Where would you say the idea for Cosmology originated? Walk me through how this came alive.

Shaun Hamill: It took a very long time for this book to gestate. I came up with the first line of the book when I was 20. I’m 37 now. I had this idea for a novel about a family running a business. John Irving’s The Hotel New Hampshire was sort of my model. I had visited this youth hostel in New Mexico and I thought it was a great setting, but it never really went anywhere because I didn’t know enough about running a youth hostel. Years later I was working on this zombie short film and when the film was finished the director had a cast and crew screening at a local haunted house attraction called Zombie Manor in my hometown of Arlington, Texas. It was out of season and they gave us permission to look around the attraction and we get about three-quarters of the way through and a house plant reaches out and grabs my arm. Of course, they couldn’t resist! It’s what they do! And that kind of got me thinking, "Who are the people that run this place? What are their lives like?" It seemed like such an interesting backdrop.

Originally I tried to write a short story, but it wasn’t working. It was too mean and ugly, so I made the family more loving and less cruel and cold and made these people to root for. It kind of just went from there. It all developed very organically, nothing was really planned and it changed a lot as I wrote it. It was very much a voyage of discovery and I think that shows in the finished product because it’s sort of hard to put it into one box.

You anchor each section of the book with an interlude from the point of view of a different character that is set between a skip in the timeline. What was the creative decision behind that?

Shaun Hamill: I finished the second section of the book and I knew I needed to pass a lot of time. That’s always been tricky for me as a fiction writer. I’m very scene focused, I like to write in the moment. With intergenerational novels, the author is usually very gifted at passing a decade in a couple of paragraphs. I didn’t know how to do that, but I thought it would be interesting to get a look inside another character's head besides Noah, and you have a different narrator and information that Noah doesn’t have yet so that you can foreshadow and cross a lot of time. You can also strip bare every character and lay it out there, completely and honestly, without any guile on top of it. The interludes do a lot of the emotional heavy lifting for the book because this a story, largely, about a family who doesn’t talk to each other.

Were any of the characters influenced by anyone you know in real life?

Shaun Hamill: Not really. I’d say Noah and I share the same fears about ourselves. My fears about being a bad person are Noah’s fears about being a bad person. My fear of my own dark side is Noah’s fear of his own dark side, although I don’t know if I would have done what he did at the end of the book! I’d say it’s very true to how it felt growing up in Texas in the ’90s. It’s weird, until I wrote this book I thought I had a happy childhood, but once I started digging I realized, "Wait, this was really grim."

I could find myself in each one of these characters, but I keep thinking about Noah’s mom, Margaret, the most. To me, her story felt the most tragic out of everyone. She loses so much. There was just so much left up in the air about her.

Shaun Hamill: She is never destined for any of what happens like Noah. When you meet her she is so spunky and resilient, and she’s still those things as the book goes on, but with a weight of sadness and grief.

I could tell just by the way she talks to her kids. She wasn’t overly loving, but not in a mean or cruel way, but more as if she couldn’t access those feelings after losing Harry.

Shaun Hamill: And that was a tricky balance to find. In a lot of ways, Margaret and Noah were the two characters that took the longest to find the balance for as far as their through lines. Margaret remains sort of mysterious to me throughout the book. There are some decisions she makes that I still don’t quite understand. She spends so much of her life just trying to hold her family together. She, in a lot of ways, is the most tragic character of the book.

I also saw so much of myself in Noah, especially as a teenager. Someone who was a loner and never really connected with everybody, but also didn’t understand why they didn’t connect with everyone.

Shaun Hamill: That took me the longest to figure out about him. When we meet Noah, he’s wearing disguises from the very beginning. He’s trying to be somebody else because he just doesn’t quite… work in the world. And then he does find the thing that makes him work. So in a way, it is a very happy ending, but also very dark.

A standout subversion and contentious point of the story revolves around Noah falling in love with the story’s central monster. A lesser author might not pull the trigger on such a relationship, especially in their first book, but I think Cosmology stands out having its characters lean into these harsh realities instead of running from them.

Shaun Hamill: I wanted to make it clear that it wasn’t super predatory on the monster's part. I meant for the love story to be read two ways, one of which there’s a genuine love story happening, and the other is the way a concerned parent would see it, which is you’re being groomed. I think both are true in this case and that’s part of the horror of the book. You can see both sides of it. It’s also a commentary on all relationships. No matter who you have a relationship with, there are going to be things you don’t know about them right away and there are going to be bad things about them—things you don’t like, things they don’t like about you, and some of it is going to be pretty dark. The better question is does their broken fit your broken? In Noah’s case, it does.

So what’s next and what are your hopes for Cosmology’s longevity?

Shaun Hamill: I’m working on a couple of projects now. One is more of a Southern Alabama gothic horror and the other is more of a fantasy novel. I’d be excited to write either! I should know pretty soon which one I’m going to focus on. I’d love for Cosmology to be a gateway drug into some tougher horror for people and I would love to think that this book has the sort of life that readers continue to pass it to each other. That’s the best compliment you can give a book. 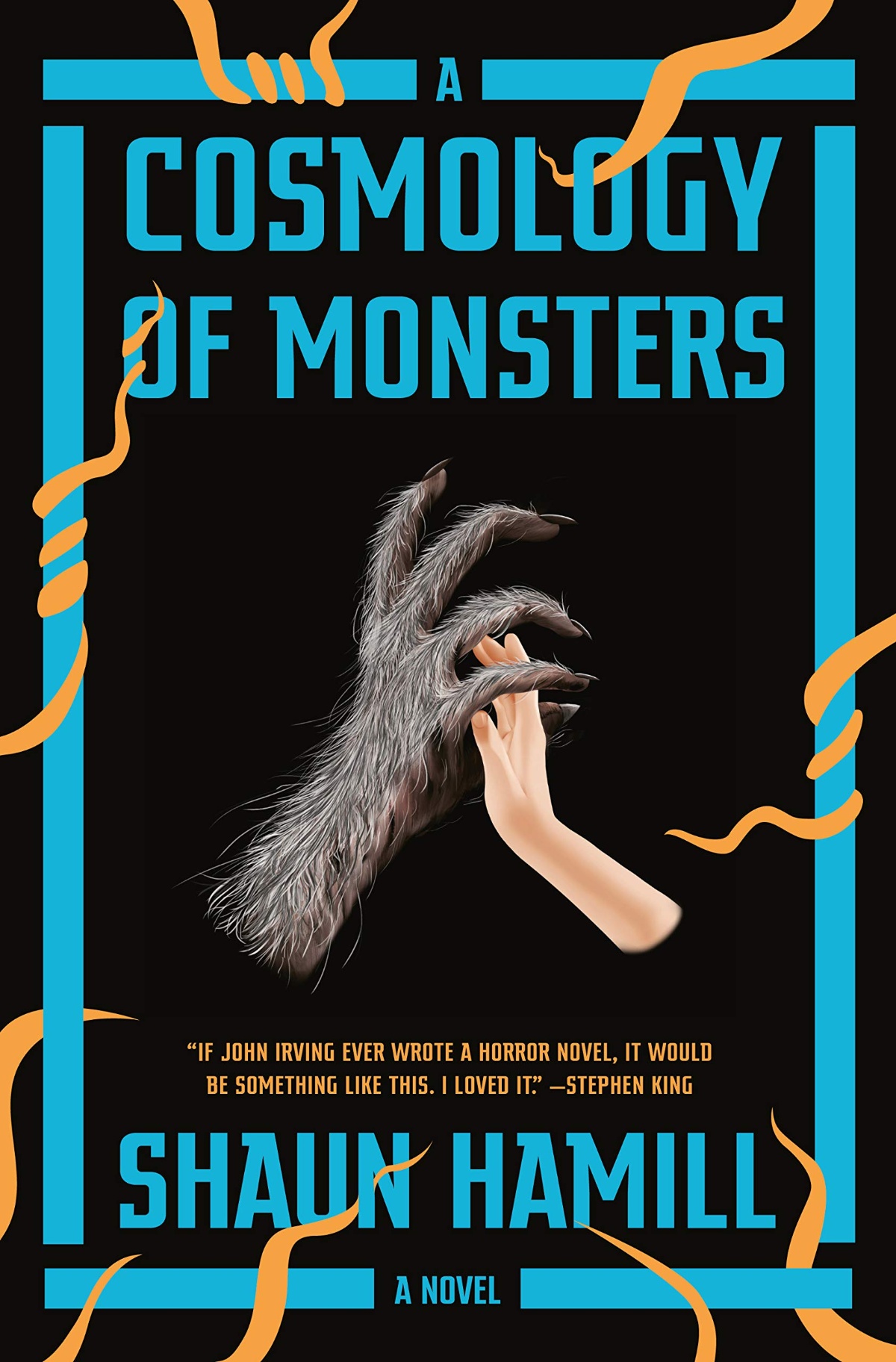