Hello, readers! In anticipation of the launch of Daily Dead’s 8th annual Holiday Gift Guide later this month, we’re going to spend the next few weeks celebrating a series of independent artists who specialize in creating horror-themed merchandise. Be sure to check back every day throughout the month of November to learn more about all of these indie artisans, and hopefully these profiles will help inspire your holiday shopping lists this year. Cheers!

With the first Taking Shape book, you and Travis dug into the history of the film series and all its iterations. I can see how the logical next step was to dive into all the unmade Halloween projects, but I was wondering at what point in the process you guys knew that you were going to do Taking Shape II?

Dustin McNeill: Honestly, Travis and I hadn’t originally planned on doing two books. We were just going to cover the lost sequels in an appendix, which quickly grew into a chapter, and then several chapters. There came a point where we realized the lost sequel chapters were going to overtake the actual films, which is when we made the call to split it up into two books. Plus, Travis kept discovering new lost sequels to cover. We couldn’t get all those new chapters written before the first Taking Shape’s October deadline, so we committed to Taking Shape II.

Because you’re dealing with a ton of unmade projects for this book, were there any challenges in getting creatives to discuss these sequels, or was everyone pretty cool with opening up and chatting with you guys about them?

Dustin McNeill: The overwhelming majority of screenwriters were only too happy to discuss their unrealized work with the franchise. Many of them still took a great deal of personal pride in their stories, which was cool to see. I think we interviewed nearly every writer we covered with some exceptions due to scheduling difficulties. I did find some Miramax/Dimension execs who simply did not want to revisit that tumultuous time in their careers, which is understandable.

What was the most surprising aspect of this process in creating these two books from your perspective?

Dustin McNeill: The enthusiasm that most of these filmmakers still had for their lost sequels surprised me a bit. It’s understandably disappointing to put so much work into a script, only to have it die in development hell. These guys didn’t let that sour the entire subject for them, which was cool to see. Most are genuine fans, some of them quite diehard, and that enduring fandom really came across in our discussions with them. That fandom was also sometimes evident just from reading the screenplays. You know you’re dealing with a true-blue fan when they’re sneaking in multiple references to Halloween III.

When looking at all these potential “what if” scenarios, were there some lost sequels that really bummed you out as a fan?

Dustin McNeill: Not really, probably because we’ve got two new Halloween movies in the pipeline to look forward to. That’s a comforting thought, isn’t it? I do think these 24 lost sequels represent a massive trove of missed opportunities, however. Some of those opportunities they can’t seize upon now due to time. (For example, Daniel Kenney and Marc Allyn Medina’s Halloween 4 with Laurie Strode or Shem Bitterman’s Halloween 5 with evil Jamie Lloyd.) But there are so many concepts that could still work. Several stories put Michael Myers on death row, which is a really cool direction that you could approach multiple ways. We also cover some ideas for rebooting the series a second time, all of which are forward-thinking enough to world build for future sequels. That’s something important that the Rob Zombie entries never bothered to do. Speaking of Zombie, there’s a lost Halloween 3D by Stef Hutchinson in the book that focuses solely on Brad Dourif’s Sheriff Brackett that I think is just wonderful.

Was there any material that you and Travis uncovered that didn’t make its way into Taking Shape II?

Dustin McNeill: Yes, but I think I’ll keep those to myself for now. We’re upfront in our introduction that Taking Shape II doesn’t cover ALL the lost sequels because that’s an impossible task. At a certain point, we just had to stop writing and release the book. If we didn’t, we’d be writing for all eternity. Taking Shape II is 600 pages long and 225,000 words. At that length, we don’t think anyone should feel shortchanged by our coverage, but there are always more lost sequels out there.

The horror genre is well-known for its sequels, so I was wondering if you and Travis have any future plans to dive into the Halloween franchise in a new way, beyond what you’ve already done with both of the Taking Shape books?

Dustin McNeill: Personally, I’m always working on the next book and sometimes even the one beyond that. I can’t speak for Travis, but I’m a little overdosed on Halloween right now. In writing these two books, Travis and I have read over 4,000 pages of Halloween screenplays, made and unmade. My brain definitely needs to decompress from that. Would we ever cover Halloween again or do a Taking Shape III? We haven’t any plans for that, but never say never!

Visit Harker Press and Amazon to learn more about their homemade products, and go here to catch up on our previous Holiday Gift Guide artist profiles! 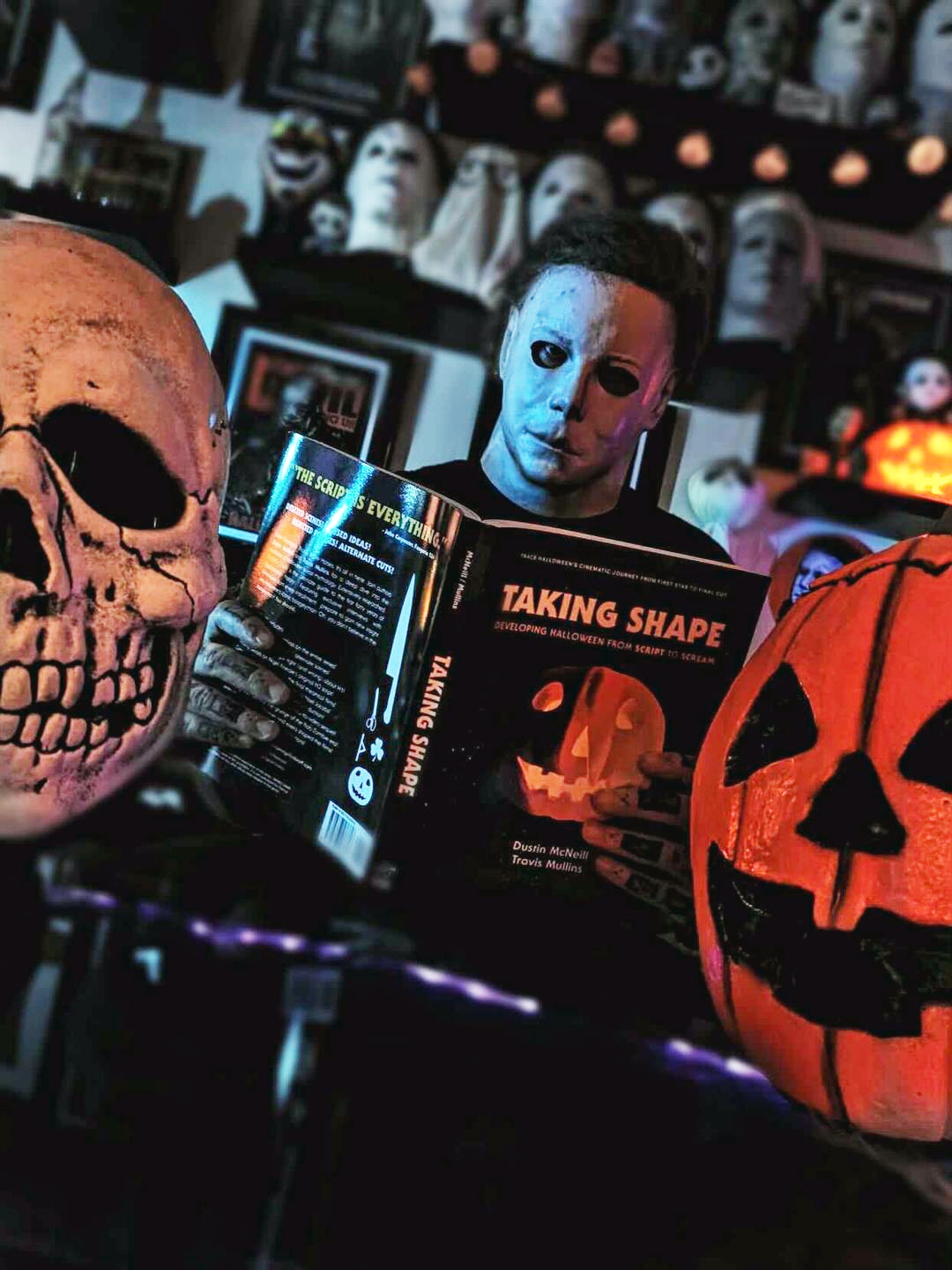 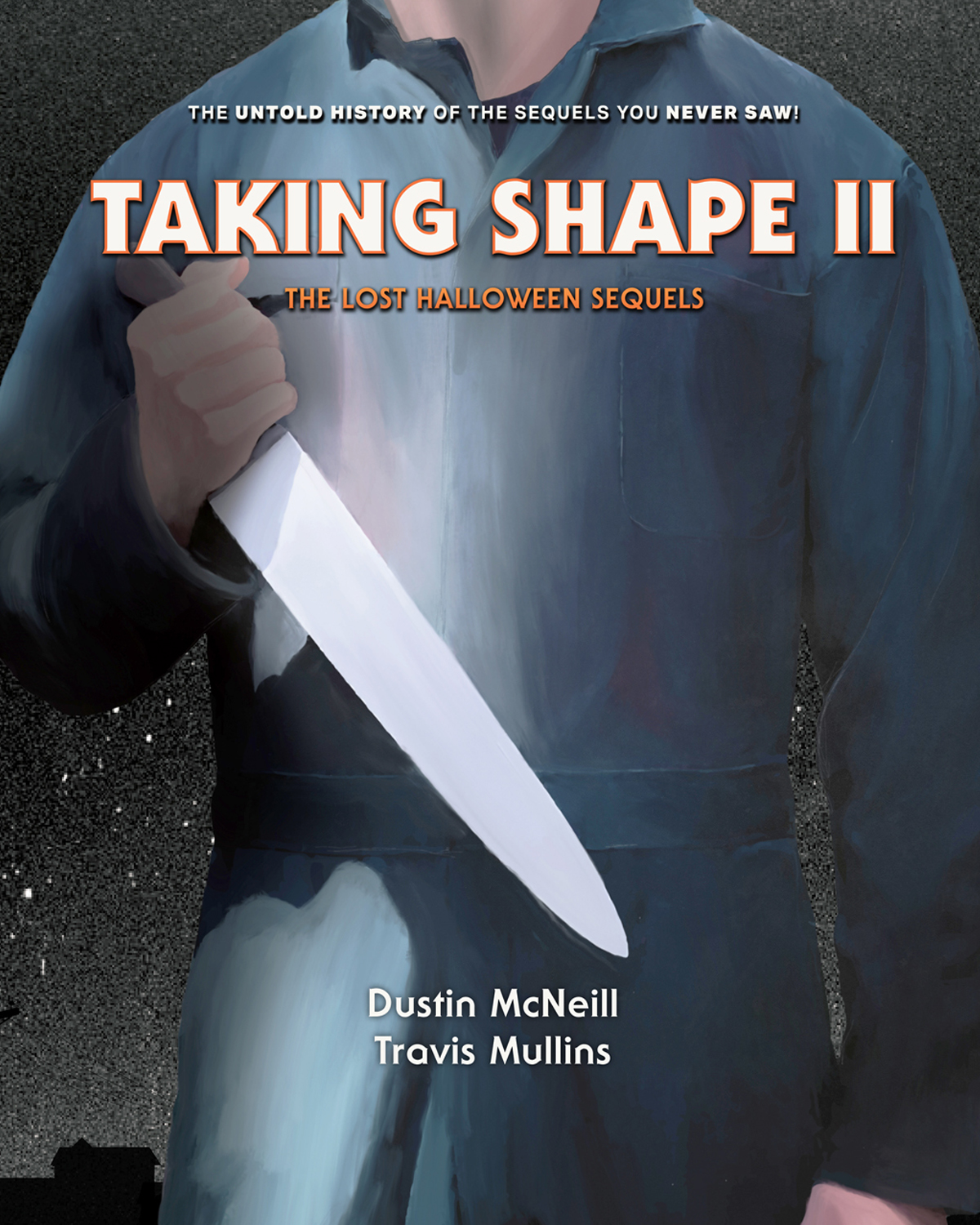