Horror Highlights: THE RIGHTEOUS, ALL YOUR FRIENDS ARE DEAD, THE VERY FINAL LAST GIRLS

Watch the Trailer for THE RIGHTEOUS: "Arrow Films have unveiled the official trailer for the extraordinary chiller The Righteous, an award-winning standout on the genre festival circuit. Arrow Films is planning a June 10th digital release in the UK, US and Eire on ARROW, the brand's SVOD service.

This first feature from director-actor-writer Mark O’Brien (AMC’s "61st Street", Ready or Not, Blue Bayou) is a dark chiller about a burdened man who feels the wrath of a vengeful God, after he and his wife are visited by a mysterious stranger. The film stars O'Brien, Henry Czerny (Ready or Not, Mission Impossible, "Revenge") and Mimi Kuzyk (The Day After Tomorrow, The Final Cut, "Shadowhunters").

The Righteous had its World Premiere at the Fantasia International Film Festival in 2021, winning the Cheval Noir and Silver Award, and has since gone on to win a Bloodie at the 2021 Blood in the Snow Film Festival, and the Grimmfest Award at the 2021 Grimmfest.

The film has been acclaimed by critics on the festival circuit, including such raves as: “A brazenly ambitious horror film about grief and belief” and “Mark O’Brien dominates both in front and behind the camera” from Alexandra Heller-Nicholas of The Alliance of Women Film Journalists, “Deeply engrossing and affecting… the film packs a philosophical punch from Brian Fanelli at Horror Buzz, and “a remarkably assured directorial debut from O’Brien that provides a gratifying experience that is sure to chill, linger and provoke in ways that harken the best of horror cinema” from Harris Dang of In Their Own League.

Writer/director/star Mark O’Brien shared: “As a dedicated fan of Arrow Films, I am beyond thrilled to be partnering with them on my debut feature film and continuing my relationship with Vortex Media. Arrow Films are a filmmaker and cinephile’s dream. It’s an honor to be a part of their tremendous catalog.”"

Synopsis: "A unique and darkly engaging spiritual thriller, strikingly shot in black and white, The Righteous tells the story of Frederic (Henry Czerny) a grieving man struggling with his faith, who helps an injured young man, Aaron Smith (Mark O’Brien) who stumbles onto his property one night, claiming to be lost in the woods. Frederic and his wife (Mimi Kuzyk) invite the man to stay for the night, but Frederic soon begins to have doubts about this enigmatic stranger’s story - and his motives for being there. When Aaron asks Frederic to commit an unspeakable deed, it becomes clear that the man is not who he seems, and has been sent to test the very limits of Frederic’s existence."

ALL YOUR FRIENDS ARE DEAD: "WHAT IF THE TEEN SLASHER FILM GREW UP?

As one of the characters in the upcoming indie horror film ALL YOUR FRIENDS ARE DEAD laments, “In movies starring middle aged people, if they die, they die from heart attacks, some rare blood disease, cancer, or diabetes. Not knives, machetes, or chainsaws. Nothing sexy like that.” Well, this movie is about to change all of that!

When 35-year-old Matt Wilbee looks at the current state of his life, he recognizes through depression that his best years may be far behind him. After making the drastic decision to end his life, he writes an email alerting the estranged, but once inseparable, high school friend group dubbed, “The Pack,” that he will be saying goodbye for good at the camping grounds they all had last seen one another at. Rushing to his side, Matt’s old friends arrive just in time at the campsite to save his life…but little do they know, a deranged masked killer is lurking in the woods, ready to pick them off one-by-one, and it’s their own lives they’ll have to start worrying about.

ALL YOUR FRIENDS ARE DEAD’s SPFX/Makeup Team has worked on beloved genre films like The Mutilator 2 (currently in production), Haunt (2019), Candy Corn (2019), NOTZILLA (2019), Terror Trips (2022), as well as Netflix’s Hillbilly Elegy (2020) and Northern Kentucky’s famed haunt THE USS NIGHTMARE.

ALL YOUR FRIENDS ARE DEAD will have its Cincinnati premiere at the Esquire Theater on August 25th.

For more information and to stay up to date on the film, visit www.TheNKY.com"

For teenager Megan Williams, who has just lost her family to a zombie attack, life as she knows it, is over. Rescued after witnessing unspeakable horrors, she is taken to a secret facility housing a rehab program for girls who survive what is known as “metaphysical phenomena.”  Because—news flash—every scary story you've ever heard...from werewolves to demons, psychos to slashers... is true. And it’s the government’s job to keep the public in the dark.

But, Megan is not one to play nicely with others, especially when she believes there’s something the agency spooks aren’t telling her about her kid sister. Or the trail of fresh corpses leading right to her door…

“Z. and I have been making comics together since we met over 15 years ago at the University of Missouri, and it's been an absolute pleasure to continue that collaboration with The Very Final Last Girls,” explained Josh Eiserike. “We have been quietly working on this for about a decade. Then, Andres Barrero joined us and proved to have a keen eye for detail, emotion, and both scary and funny stuff that works very well within the story! We are absolutely thrilled to finally bring it to life with the help of the entire Darby Pop team.”

“Josh approached me to work on the last part of the book; when he told me it was 'terror,' I accepted immediately,” said Andres Barrero (he/him). “Working with Josh and the Darby Pop team has been a pleasure, the work environment has been very professional and respectful, and I can't wait to see the book published!”

For fans of Scream and The Cabin in the Woods, The Very Final Last Girls drops June 29—just in time to put the scare back into your summer vacation! Letters by Josh Eiserike and cover by Siya Oum. 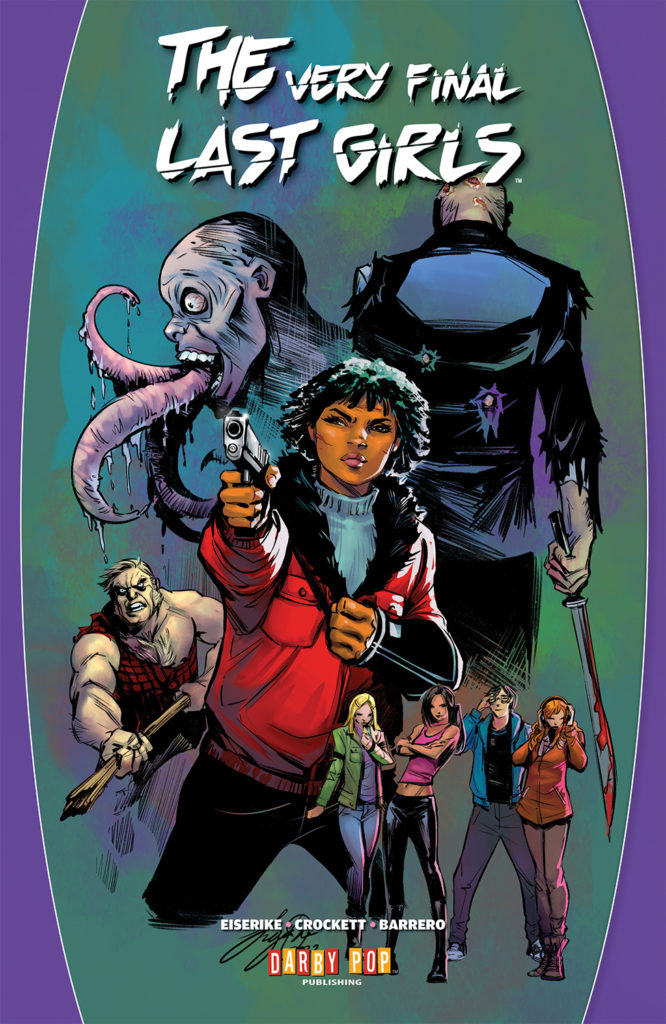