In today's Horror Highlights: A Q&A with Water's Edge cinematographer Andrey Nikolaev, the short film Goodnight, Halloween, and details on the new novella A Ruin of Mercies!

WATER'S EDGE Cinematographer Andrey Nikolaev Discusses Monsters and More: "Crypt TV is known for their horror themed digital content, with an emphasis on monsters and recurring characters in linked universes. One of the many stand out creature features being Water’s Edge. In case you aren’t familiar with the film, the synopsis reads: After losing her mother, Lexi and her father retreat to an isolated cabin to withdraw from their sorrow...but what do we become after death? Can we transform into something more monstrous? We wanted to give fans a glimpse inside the production process, so we spoke with Water’s Edge cinematographer Andrey Nikolaev. Below he talks about everything from how the Woe Bones monsters were made to finding the right lighting in wooded areas."

-Before working on Water’s Edge, were you familiar with Crypt TV films?

No, I was actually too scared to watch horror films, so I’d never dug into the horror industry.

-Did you get any direction from Crypt TV on the look they were going for? Or was that up to you and the director?

They didn’t give any directions, but helped us to achieve the look we wanted. They were very supportive.

She is very precise in the shots and she always knows what she wants. And we have the same taste in shots, so we don’t have to spend time discussing references. That’s what I like about her.

-A lot of Water’s Edge takes place outside in the woods. I would imagine that would be very hard to light because of shadows and the sun going down. Was this an issue while filming?

I usually don’t use lights when we shoot outside, to achieve a more naturalistic look. Nowadays modern cameras have enough dynamic range to handle high contrast environments such as daytime in a forest.

-Dana Brawer was the writer of the film. Was she on set during filming? If not, did you have any conversations with her on your approach?

She wasn’t on set unfortunately, so I didn’t have a chance to meet her in person. But we worked closely with Jasmine Johnson who was the development executive on the project.

-Are there any techniques in particular that you do to make a horror project scarier?

I think the best horror techniques are not about cinematography at all. It’s about story and how a director wants to tell it. But I can tell you my least favourite techniques are jump scares. I call them lazy scares, because they are the easiest way to scare the viewers.

-Were the Woe Bones CGI or was that all practical makeup?

It was all practical makeup, except the eyeholes. We had to darken them to make them look like black void.

-Water’s Edge wasn’t your first project in the horror genre. You worked on the feature film The Bride. Did working on The Bride help prepare you for Water’s Edge?

It did help me prepare for high level production in general, but as I mentioned, I don’t distinguish horror and non-horror productions, the rules of telling a story are the same.

-In a previous interview you said you used different filtrations on the lenses for The Bride, because it takes place in the 1800s and you wanted a more vintage look. Did you do any techniques like this for Water’s Edge?

I decided not to use filtration on Water’s Edge, I just thought it wouldn’t be right for this project. Why? Just intuition. I always follow my intuition

Goodnight, Halloween is a short fantasy thriller from award winning writer/ director Luther Bhogal-Jones – in this alternate world Halloween creatures have co-existed with mankind for all time…but now a forced government policy has removed their rights and allowed human citizens to exterminate them without consequence. The creatures have been forced into hiding and forged uneasy alliances between competing different species, all with their own agendas. A ray of hope emerges – evidence that could discredit K.R.O.N.A – the Khristian Right Of New Amerika – and having retrieved the evidence a group of creatures are scattered and forced to stay in hiding while the evidence is painstakingly uploaded to the Network…if they can stay alive long enough…which is where the film begins…

Ironically prescient for these times after being 14 years in the making (don’t ask, or refer to the accompanying 10 FAQs for more information on that) Goodnight, Halloween is a thrilling stylish throwback to the creature films of the VHS 80s era – something that could have come from studio stables of New World or Empire Pictures – while combining elements of Robocop’s mediabreak interludes and downbeat, cynical elements of John Carpenter’s work (especially with the Carpenter-esque score to the film – courtesy of Worthing composer Monzen Nakacho)"

A RUIN OF MERCIES Wester/Horror Novella: "Set in the Dakota Territory in the 1890s, the story begins when a Lakota Indian's tribe is slaughtered while escaping the reservation, though the youth is spared by one of the pursuing soldiers who happens to be his estranged father. Wandering the plains, the Lakota is seduced by a tree-like alien parasite that promises purpose and revenge against the Americans in exchange for helping it spread across the land through human sacrifice. Meanwhile, his father and half-brother's infantry squad is tasked with tracking down and killing him." 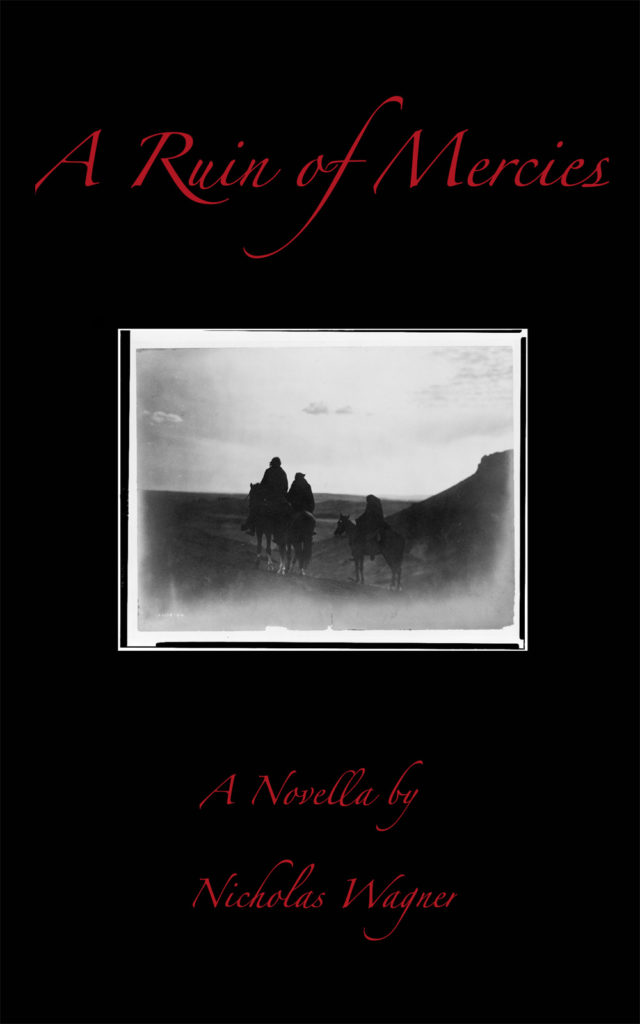