MISTER CREEP: "Three college students stumble upon a lost television broadcast of a deceased serial killer and search for its location. They discover a nightmarish cover-up of a clown-faced man who killed hundreds and may still be around long after his death.

Monsters vs Madness: A Benefit Auction For Planned Parenthood - Happens Online November 11-27, 2022: "This November, fans around the world will have a chance to bid on one-of-a-kind painted figures of the most famous movie monsters ever in an online auction to benefit Planned Parenthood. The Monsters vs Madness auction is the brainchild of author, pop culture expert, producer and co-chair of the Atlanta Monsterama fan convention Anthony Taylor. Last summer, dismayed by the Supreme Court decision in the Dobbs case, Taylor decided to do something to help correct this overstep from the court.

"I've decided that expressing my dissent of the Supreme Court decision to overturn Roe v. Wade by preaching to the choir here on social media isn't enough, so I've organized a benefit auction to support Planned Parenthood. I'll be auctioning off movie monster figurines hand-painted by some amazing artists! All funds raised will benefit Planned Parenthood to help them support sane reproductive rights,” say Taylor.

Creators from the world of movies, television, comics, literature and more are donating their efforts to raise funds and awareness to help Planned Parenthood, an organization that provides healthcare and advocates for reproductive rights and practices. Bidders must register at the Auction Page (www.charityauction.bid/MonsterVSMadnessBenefitAuction) where you may also make a direct donation, view the auction catalog, and learn more about the cause. Bidding begins at midnight  Eastern time on November 11, 2022 and ends November 27 at 6:00 p.m." 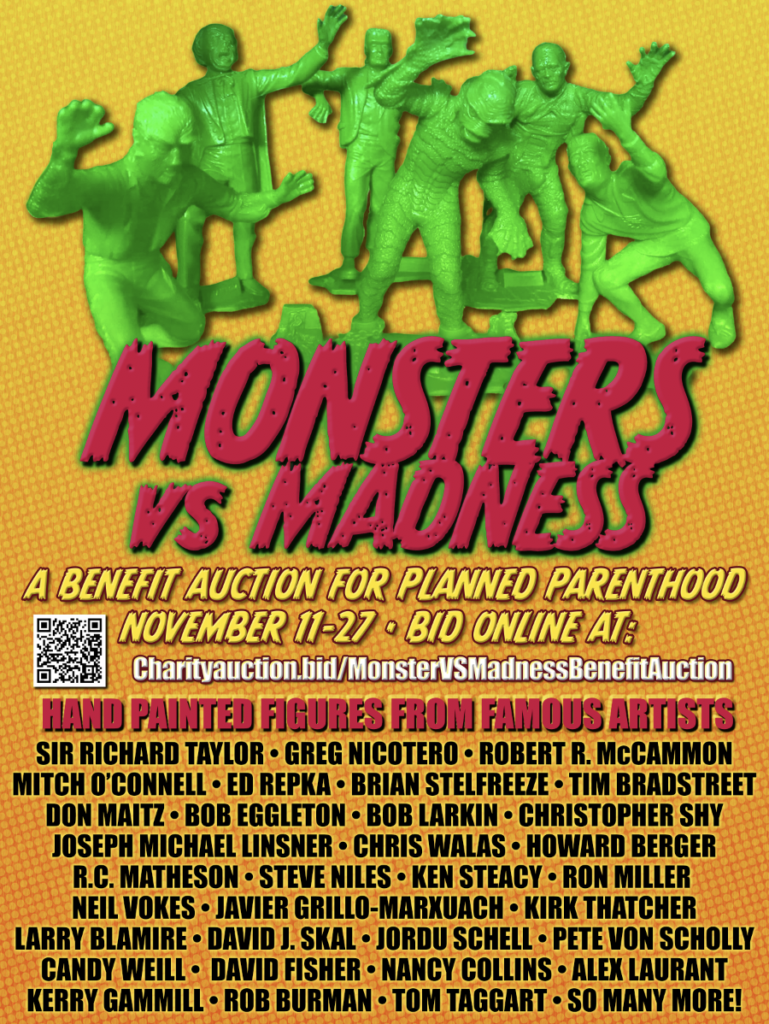 The New York City Horror Film Festival will be presenting its Lifetime Achievement Award to slasher icon Kane Hodder: "After a two-year hiatus, the New York City Horror Film Festival (to be held at Cinépolis Luxury Cinemas, 260 West 23rd Street, from December 1-4) will relaunch its Lifetime Achievement Award on the occasion of the fest’s 20th Anniversary. The recipient of 2022’s honor will be none other than Friday the 13th/Hatchet star Kane Hodder, who has been terrorizing moviegoers since 1997.

“No one does scary better than Kane Hodder,” says Ronnie Hein, the festival’s CEO and Executive Director. “Kane has been making audience scream their lungs out for decades, making him one of the true masters of horror. The New York City Horror Film Festival looks forward to honoring Kane for his long tenure in the genre. And our audience can’t wait to meet him for what promises to be a very special night.”

Hodder has starred in hundreds of films and television shows, as well as being a stunt coordinator and stuntman on scores of films (including Seven and Leatherface: Texas Chainsaw Massacre III). After years as a stuntman, Hodder made his way to acting. Hodder is the only actor to play terror titan Jason Voorhees more than once, across four entries in the Friday the 13th franchise, and even a videogame based on the films. The actor later segued into playing another fearsome scarred killer, Victor Crowley in four Hatchet flicks.

In the mid-1980s, Hodder was performing a stunt that went horribly wrong, leaving him with second and third degree burns over 40 percent of his body. It was a long and painful road to recovery, chronicled in his autobiography Unmasked: The True Story of the World's Most Prolific Cinematic Killer and director Derek Dennis Herbert’s documentary To Hell and Back: The Kane Hodder Story. As proof of his dedication to his movie mayhem. Hodder has the word “Kill!” tattooed on the back of his bottom lip.

When he is not filming, Hodder spends much of his time working with children in burn centers, as well as with numerous charities. Despite the roles he portrays, Hodder is often described as a very kind, compassionate and generous soul, who truly cares for those who suffer life’s cruel blows. As anyone can tell you who has met Hodder at one of his many convention appearances, he loves and appreciates his fans. Hodder also has the most wicked and wonderful comedic timing, as evidenced when he played himself in the cult TV series Holliston. He is also an avid poker player who often competes in celebrity tournaments.

“Attitude is everything when it comes to the character,” Hodder once said of playing Jason. “I’m a real natural when it comes to looking scary. If you’re not seriously trying to frighten people, then the fear these movies are intended to generate doesn’t come across. I truly try to scare the shit out of people all the time. Between takes, in the make-up trailer, you never know when I’m going to go ‘Boo!’ That’s the main reason I keep getting asked to play Jason.”

The NYC Horror Film Festival is the brainchild of Michael J. Hein, who created the festival in 2001 as a venue for new independent horror filmmaking. After Michael’s passing in 2011, the festival created the Michael J. Hein Achievement Award to celebrate the hard work and perseverance of creators in the field. Rob Zombie, Stuart Gordon and Tom Atkins were the first recipients of this award.

For more information about the festival and to purchase passes and tickets, please go to www.nychorrorfest.com"