How Beyond Fest and the Drive-In Saved My Summer

Like pretty much everyone else out there, 2020 hasn’t exactly been kind to this writer. There have been the everyday stresses: pandemic-related concerns, watching in horror as we see people’s civil rights being stripped away, wondering just how we’re going to make it through the financial responsibilities of the next few months, and just trying to stay healthy and safe as a whole. Admittedly, we’ve had a few other things to contend with in our household—three of our cats unexpectedly passed away within the span of four months (they were elderly, but your heart is just never ready for those goodbyes, regardless of age), plus our car ended up getting totaled at the end of February and we’ve had a few more personal issues we’ve been dealing with as well. So, suffice to say, 2020 can go suck an egg.

Heading into this summer, I was feeling extremely bummed out because while we’re typically homebodies as it is, that doesn’t mean I don’t enjoy getting out of the house now and again (now the focus is on how to do so safely). And in most instances, especially during the summer months, we usually spend many of our nights at the various drive-ins around Southern California. Truth be told, I didn’t know how much I truly needed these cinematic diversions until now, and I’m so grateful that in a sea of inconsistency and doubt right now, I at least have this one constant back in the mix once again.

The drive-in has been a part of my life for as long as I can remember, which is no exaggeration since I have a very faint memory of seeing a special release of Blazing Saddles one weekend when I was only a few years old (I recently confirmed with my mom that she did indeed take me with her to Blazing Saddles when I wasn’t quite two and a half, and she could hardly believe that I’d even remember going, since I was mostly bouncing around the back seat the entire time, much to her dismay). So, throughout most of my life, the drive-in has become something of a safe haven for me: it’s the place where I have continually discovered (and now, rediscover) the magic of the moviegoing experience, where I can enjoy movies under the night sky with friends and family, and back in the good ol’ days, the Twin Drive-In, which used to be located in Wheeling, Illinois, would host fireworks celebrations for the Fourth of July holiday, and other special events tied into each weekend’s screenings, too. There was a real sense of community to the drive-in experience during the 1980s and early ‘90s, and it became my home away from home during the warmer months of each and every year.

Throughout my childhood (and during my teen years, too, when I started going to the drive-in on my own), there are so many distinctly wonderful memories that I have from all the now-classic films I took in at the drive-in each and every year. Cheering along with a parking lot filled with cars honking in celebration when Ripley straps herself into the Power Loader to take on the Queen Xenomorph (and then following up Aliens with David Cronenberg’s emotionally devastating The Fly). Or the time that my mom and I found ourselves both quietly weeping our way through the ending of Ghost (there was also an instance when I was inconsolable after Nancy’s death in Nightmare 3, and my mom threatened to take me home if I couldn’t get myself together). Or there was the night when there were people dancing outside their cars during the parade sequence in Ferris Bueller’s Day Off. I even remember trying my damnedest to see through the pouring rain that fogged up the windshield of my crappy first car while Demon Knight played on the big screen one stormy night. There are so many other moments, too, but you get the picture.

To me, the drive-in experience is sacred (it’s basically my form of church) and it’s very much something that has always meant a lot to me in ways that I cannot simply articulate, which means that for as much as I may try here, I’m probably not doing a great job of talking up just what makes the drive-in so great to me. But if I’m ever in need of trying to feel centered again, or I just need a bit of an escape from the overwhelming pressures of life, that’s when I head to the drive-in.

One of my favorite things about moving to Southern California is that we’re spoiled with drive-ins that are open year-round, which has allowed me to spend many nights for more than a decade now under the stars watching countless movies from the comfort of my own vehicle. Most of my birthdays have been spent at the drive-in, and a handful of anniversaries, too. Basically, if there’s a major life milestone to commemorate, I’m always going to suggest going to the drive-in to do so. I can’t help it; it’s just who I am, and thankfully my other half enjoys my drive-in rituals just as much as I do.

So, when pretty much everything began to shut down months ago because of COVID-19, I think one of the things that I was truly sad about was the fact that for the first few months of the pandemic, we were without a vehicle, which meant that I couldn’t get to the drive-in even if I wanted to, essentially cutting me off from any kind of respite. And admittedly, that’s a very small problem in comparison to everything else going on in the world (or just the stuff that we’ve been contending with in our household as well), but the selfish part of me just wanted nothing else but to be able to return to the drive-in once again.

Thankfully, we were able to procure a new car in June, which was due to so many amazingly generous people out there, and having new wheels meant that I was finally going to be able to once again enjoy the ritual of taking in a double feature of outdoor movies (oh, and get groceries and things like that again, too, but you know—MOVIES, YAY!). And even though the rest of the world still feels like it’s on fire, and I have no idea what’s going to happen in the near future, just having the safety of this escape once again has been something of a lifesaver to me over the last six weeks.

And while I’ve been able to take in some regular screenings of a variety of classic films at some of my favorite outdoor movie haunts (and I’ve even discovered a new favorite place as well), it’s really been the Beyond Fest and American Cinematheque’s “Road Trip to the Drive-In” series at the Mission Tiki Drive-In, which began last month, that has been a complete godsend for me. Each and every Thursday, they have curated some truly inspired double features that have not only reinvigorated my love for certain genre movies, but have also provided myself and countless others with a weekly event to get excited about. Right now, we’re all living in a very “present” state of existence, where there’s not a whole lot to look forward to because we are stuck in a period of perpetual stasis, so just having “something” to plan for, to be enthusiastic about, really means a lot to me right now.

I know this all sounds like some silly ramblings about movies, and I know there are more important things to be concerned with right now, but I can’t even begin to describe the feelings that came over me this past week during the Beyond Fest double feature of The Lost Boys and Fright Night, which is admittedly a double feature that 10-year-old Heather would have absolutely lost her mind over (and a much, MUCH older Heather definitely did go bananas over, as well). I don’t even know how or why it happened, but as I was sitting there and the opening title credits of Fright Night were underway, I just felt this hugely emotional wave of gratitude wash over me in that moment, and admittedly, I got a bit choked up. Okay, so I basically started crying a little bit like a total dork.

For me, horror movies (heck, movies in general) have always provided me with the means to break away from the bad shit that comes along in life, and they’re the one constant escape I still have. So, to be able to go see some of my favorite films like Mad Max: Fury Road, Jaws, Tremors, The Texas Chain Saw Massacre, The Evil Dead, The Lost Boys, and Fright Night—and have the opportunity to discover “new to me” classics like Death Race 2000—over the last month or so has been an amazing gift and I’m so grateful for Beyond Fest and the American Cinematheque for taking their show on the road—both figuratively and literally—and giving us movie geeks something of an outlet for this summer of uncertainty.

Right now, nothing feels normal anymore, but having these double features every Thursday night provides me with the rare opportunity to look forward to something again, and I never knew how much I needed just this small bit of normalcy back in my life until now. So, to Beyond Fest and the American Cinematheque, thank you for the movies, thank you for the memories and thank you for giving all us film lovers a great excuse to assemble every Thursday night at one of the best possible venues to enjoy movies at: the drive-in theater.

[Images at the top from American Cinematheque's Twitter page.] 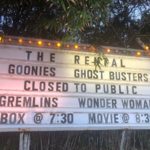 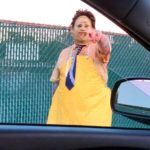 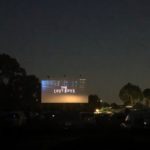