Every Tuesday this April, we’re showing some love to all the filmmakers out there who have been creating compelling and inspired short films that represent everything we love about genre storytelling in honor of our ongoing Indie Horror Month celebration (you can check out last week’s selection HERE). Today, we’re chatting with director Nate Ruegger about his fantastically creepy short Trust Me, which debuted as part of ALTER’s slate of shorts last summer. He discussed the real-world inspirations behind the story of Trust Me, the challenges he and his team faced while shooting the project, whether or not he has more plans for the story of Trust Me in the future, and more.

Also, we’ve gone ahead and included Trust Me at the end of our interview with Ruegger, and this writer highly recommends giving it a watch—it’s excellent!

Can you discuss The Goatman and why this creature made for the inspiration behind your short film?

Nate Ruegger: I have to thank our writer, Leslie O’Neill, for introducing me to The Goatman. At first, I thought it was just a monster of her own design, but when she told me about her research, and I started to do my own digging, I found that Leslie’s script was just the tip of the iceberg when it came to this ongoing phenomenon in our forests.

There have been hundreds of witness accounts documented from various sources around the world and across the years, and yet, they all reported a similar event: an encounter in the woods with a creature known for its overwhelming scent, for its ability to change shape, and for stalking humans. Our intention with the character of The Goatman was to create a cohesive monster, combining elements from these witness accounts and crafting them into a unique story that focuses on the relationship between two people as they experience this night of absolute terror.

In fact, reading all of these witness accounts of The Goatman is what inspired me to make Trust Me—and to make it as an atmospheric horror movie featuring this new breed of monster—one that fuels our paranoia and forces us to ask: who, or what, can we trust?

You were able to make this short through the support of the Seed & Spark platform—how great was it to be able to have the support from those who found you through S&S, and did that keep you inspired as you headed into production?

Nate Ruegger: Working with Seed & Spark was a blast! We were so fortunate to have so many friends, family, and some straight-up fans contribute to this film. While some might find crowdfunding intimidating at first, for us, it was really about finding our core audience who is in our corner, rooting for this indie crew of filmmakers to tell this atmospheric monster movie and to tell it right. The faith that they put in us, cheering us on, kept us fired up the whole way. Maybe one of my favorite examples of this was when one of our top contributors visited our set to see us in action, and pointing out to him how much thought and care we put into the composition, lighting, lenses, camerawork, performances, makeup, and more into each frame. Seeing his face light up on set really struck home the power of movie magic and how every single contribution made a huge difference in making our indie horror dreams come true.

Even though it may seem “easy” to go out and shoot in the woods, I think the locale can be extremely challenging for filmmakers. Can you talk about your experiences while making Trust Me?

Nate Ruegger: Yes, filming in the woods is so hard! However, what made it much easier was all the hard work that our writer Leslie O’Neill and especially our producer Darius Frye put into pre-production. By the time I came on board, they had already locked in our cast, most of our crew, our props, our location, and so much more, so that all I needed to do was lock in our camera crew and help with crowdfunding, and then we could get started. However, right as we applied for location permits—our original location changed their minds on us—Darius found an even better location, but it was over 125 miles away from home all the way up Palomar Mountain in San Diego County. Of course, for that distance, we had to completely reconfigure our budget to feed and shelter our cast and crew for a long weekend—something that I felt very confident about once I had a couple of budget meetings with Darius and Leslie.

Our first day on location was indeed very challenging, where on that little narrow trail we encountered other hikers wandering through our shoot as well as the sounds of airplanes, helicopters, motorcycles, and even chainsaws. However, thanks to our amazing production sound mixer Marcos Butron, Jr., you’d never know that from watching the film, as he delivered a pristinely clean dialogue track for us. Also, on our film’s indie budget we had to rely on our actors to costume themselves and our lead actress Alexandra Bayless stepped up to be our hair and makeup artist as well. We worked very closely with our cinematographer Kelsey Talton to get the right camera and lighting package to be able to see our actors in the near total darkness while filming at midnight up a mountain in below freezing temperatures. In fact, the poster shot we have of our lead actor Luke Cook standing shirtless before the woods was filmed at 30 degrees Fahrenheit, so we had a P.A. just off camera waiting with a coat and hand warmers, so the moment I called “cut,” Luke Cook could be bundled up and taken somewhere warm so he wouldn’t freeze out there.

So while we had our fair share of challenges filming in the woods, we pulled through thanks to all the hard work our cast and crew put into pre-production: rehearsing our actors, putting together a look book for my cinematographer with example images for every single shot in the film, plus having an experienced cast and crew who’d made indie films in the woods before. I was so lucky to look up when we finished our last night of filming, all of us staying quiet to record ambient background noise, that I could see dawn just creeping into the night sky, meaning that we had made it; we’d made our little indie horror film on time and on budget. It was a dream to have so much fun making this movie—and I can’t wait to do it again.

How did the short end up being a part of ALTER’s killer slate of shorts? Did they approach you or vice versa, and do you feel like ALTER provided you with a wider audience for Trust Me?

Nate Ruegger: Our short Trust Me ended up on ALTER’s killer slate of shorts entirely through the amazing hard work done behind the scenes at Nightmares Film Festival, which was the best film fest experience of my life, hands down. It was there at Nightmares Film Festival that I was fortunate enough to meet folks from ALTER, tell them about my film, hear more about their platform, and several months later they approached me about having Trust Me play on their slate.

I can say without a doubt that ALTER definitely provided me with a wider audience for Trust Me. I absolutely loved my festival experience with the short going around the world to seven different fests, but altogether, those in-house screenings had a total attendance in the hundreds, and on ALTER, at the time I’m writing this, Trust Me has over 800,000 views across Facebook, YouTube, and Instagram. I never expected that kind of audience outreach for our little monster movie and I’m so grateful to ALTER and Nightmares Film Festival for helping to make that happen.

You do a great job of building up a lot of tension here in a very short amount of time—was that a huge challenge for you as you were putting the short together since you don’t have the luxury of time like you would on a 90-minute feature?

Nate Ruegger: Thank you so much! That means a lot since, from the very beginning, I put a lot of thought into making our film eerily suspenseful while still keeping it brief. But to keep that tension short and sweet in a monster movie that’s based on witness accounts, I knew I had to honor the source material, so I directed Trust Me as a blend of my experience working in documentary, my diehard fandom of iconic ’80s horror villains, and my deep love for today's renaissance of slow-burn indie horror.

Our film begins as "a slice of life" about an ordinary couple in a romantic weekend getaway, following them in a simple shot/reverse-shot documentary style on their romantic weekend getaway… until they cross an unseen boundary between the real and the surreal, and the composition becomes more neat and orderly, the takes last longer, the actors’ faces dip deeper and deeper into shadow, the sound and angles become more and more subjective… all as our couple gets lost in an uncanny valley between what is known and unknown—the home of The Goatman. As Jaws made you afraid to go in the water, Trust Me was designed to make you think twice about going into the woods—not because this creature will eat you—but because it will become you.

With Trust Me, I give you our depiction of the next great horror villain, our creature who embodies our current age of anxiety: a monster who looks and sounds like your closest companion and asks you to follow them into the dark. So now I ask the same of you: will you dare to turn your lights off and watch this short… do you trust me?

Any plans for turning Trust Me into a feature in the future (I know that I’d be game for it)?

Nate Ruegger: Yes, I am working with the writer of the short, Leslie O’Neill, and we’re in the early stages of turning Trust Me into a feature with producers Sandra Leviton and Rachel Liu—and right now I can’t say more than that beyond... stay tuned! 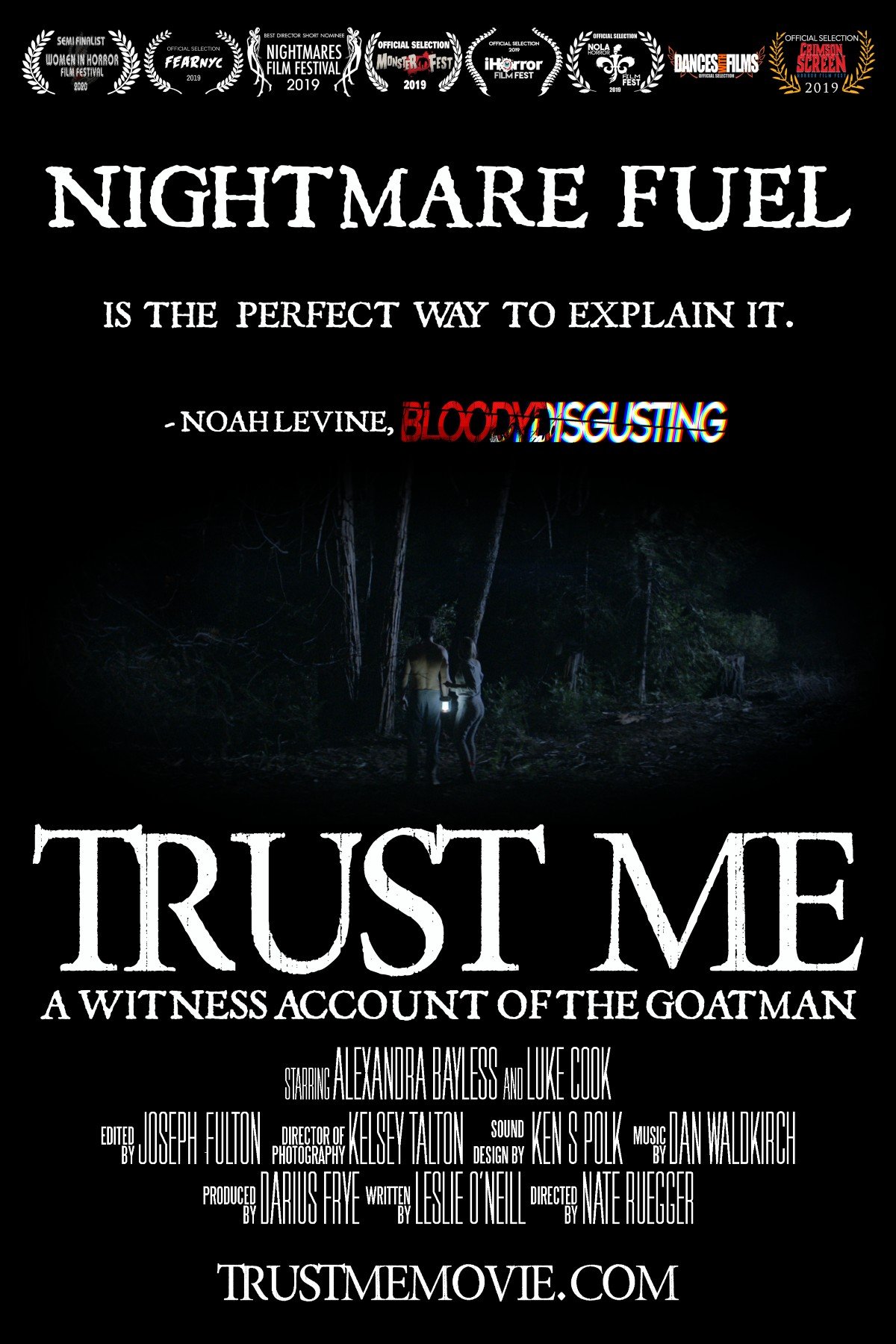