Set to arrive in theaters this Friday is Separation, the supernaturally infused horror drama directed by William Brent Bell. Starring Rupert Friend, Violet McGraw, Mamie Gummer, Brian Cox, and Madeline Brewer, Separation is centered around a couple (Friend, Gummer) who are in the middle of watching their marriage fall apart, with their young daughter Jenny (McGraw) caught in the middle of everything. Tragedy strikes, leaving Jenny’s father to care for her alone, or so he thinks, because there’s another entity keeping an eye on the young girl—one that is otherworldly and potentially has some sinister plans for the family.

Daily Dead recently had the opportunity to speak with Bell about how he initially got involved with Separation, and why it ended up being such a personal project for him. Bell also discussed working with his talented ensemble for the film, including Troy James, who plays Separation’s supernatural presence and brings so much to the table with his brilliantly physical performance.

Was this a project brought to you? Did you kind of come across the script and something about it really hooked you? I'm just curious how the initial stars aligned on this.

William Brent Bell: Well, I was actually having a TV meeting with an executive named Gloria Fan. She's at Fox and Disney now, or was at one of the two. She had developed the script for this as a producer, prior. She asked me, "I'm in TV now, so I can't be involved with this, but you might really like it. Did you like Kramer vs. Kramer?" And I was like, "Oh my God. That's like my life, as a child." And she goes, "Well, the script is what if the mother died and came back to fight for her daughter?" And I was like, "That sounds amazing." To me, I could totally see what that movie is. Even if I hated the script, I'd be like, "We'll work on it," because it sounded great and I was instantly really passionate about it.

Then I tracked down the script and met the writers and then we worked together on the script for a while. I knew some people who were interested in making a film with me and I felt like elements of this movie could've really been destroyed in more of a formal studio system. So I was like, "If you guys really want to make a film, this is one I want to make." So we put it all together and went up to Brooklyn and shot the movie.

But this story of a child caught between two fighting parents was something that I was drawn to, because that was my life. My parents were divorced when I was the age of the daughter in this story. There was just a lot of fighting and it's like, kids hear everything. And in this story, I really tried to shape it to be not just about a child whose parents are going through a divorce or loss, but it’s also about the irresponsibility of parents sometimes, because they don't really take into account how it might be affecting the child.

What I think is interesting, too, is the character, Jeff. I really related to him a lot. I don't know if it's because of what I do for a living or what, but I feel like whenever you're somebody whose career involves the creative arts, people think the work that you do isn't real and that there's no intrinsic or traditional value in it. And I'm just curious, did you relate to Jeff at all in this? Because you're a filmmaker. You've been successful. But I'm wondering if there's still a part of you where people are like, "Oh, you make movies. You're not really working."

William Brent Bell: Oh yeah. Believe me. Like I said, I relate so much to Jenny’s situation, but I also relate exactly with what Jeff is dealing with. For writers, you could be writing scripts for studios, but if those movies aren't something that the public has known and seen, they don't even really think you have a job. And not only that, but for me, this job, in my head, makes it hard to grow up. I still feel like a kid, because I'm constantly making things and using my imagination, and it doesn’t revolve around a typical nine-to-five world. So I see it from both sides. I feel that it's made me not feel as adult, maybe, as other people.

And that ends up being a big point of the story. Can he still be who he is and not compromise that side of his being an artist and also be comfortable enough to make his business work for him and make that work for being a good parent? That struggle so many of us go through, so yeah, that was a big part of telling that story, for sure.

I would love to talk about this cast. Because, from top to bottom, everybody is fantastic. I was really excited to see Madeline Brewer in this, but Rupert and Mamie and Violet and Brian, all are just excellent as well. Can you talk about putting this cast together and working with them on their characters? Especially Violet. This little girl goes through so much in this movie and she's so darn good.

William Brent Bell: Well, with Violet, I pretty much saw everybody. There are hundreds of girls in this age range who were great and they had great potential. But I mean, nobody really was sticking out to me. I got totally panicked when I got to Brooklyn and we were a couple months out from shooting, and we hadn’t found our Jenny. So then I was like, "You have to rewrite the character to do less." Because there's no way, especially with the limited amount of time you have with a child actor, that this character who does more than all the adults really was going to be able to take all of this on. She has to be sweet. She has to be happy. She has to be sad. She has to be angry. She has to be scared. She has to be the adult, too.

But then I saw Violet's audition, and that took the whole weight of the world off me, because I was like, "She can do it. She can do it all." And that's so important in a movie like this. I also called and spoke to one of the producers of The Haunting of Hill House and he was like, "Look, I wouldn't give you a recommendation if I didn't mean it and I’m giving you the biggest recommendation I can when it comes to Violet." And her mother was great, too. How their parents are can be so important, too.

With Rupert, he just responded to the material. We had a meeting and he just was so passionate about it. He was one of my dad's favorite actors, which was something I didn't know at the time until I called my father and said, "I'm getting this Rupert Friend.” And he was like, "He's my favorite TV actor." So that was a great sign. And Rupert and I would get together every day and just go through the script and prep and shaped the dialogue and shaped the moments. To me, it's a lot about talking through scenes. Not so much running through scenes, as it is about understanding why we're doing what we're doing and should we change it. So, his involvement was amazing.

When we were talking about Rivers, the father-in-law in this story, Brian Cox was my dream casting choice. And the producer was like, "A hundred percent. Let's do it." I talked to the writers about it, too, and they were like, "That's who we wrote the script in mind for." I thought that was amazing. And he said "yes," which was a dream come true for all of us. And similarly, as we were first talking about casting, because the movie started so much with Kramer vs. Kramer and my connection to that movie when I was a kid. And I was like, "Well, Mamie Gummer would be perfect, but she'd never do it because her mother did the first movie." We went through and I got really close to casting the part with a couple other good actors, but for one reason or another, it wasn't working out. And then, we got a call from her agents and they said, "We learned about this project from Mamie and she loves it." I couldn’t believe it. When I first met with her, she's talking about her mother's performance in Kramer vs. Kramer, it just  blew my mind. I was just like, "This couldn't be any cooler for me." To be doing this movie that has shades of that film that means so much to me. And then, to be able to actually put Meryl Streep's daughter, who in her own right is such a great actor, was just really incredible.

And then Madeline, she was my top choice. I loved her, at the time primarily from The Handmaid's Tale. Her character's just so interesting, so for me to see her play a more normal, relatable character was exciting. There’s this saying that directing is 80 percent casting, and it's just so true. I felt so lucky shooting this movie outside of the Hollywood system to have such a great cast involved. It was very cool.

Before we go, how integral or how great is it to have somebody like Troy James involved with this, who could bring this kind of character that he plays here to life in camera? As opposed to having to create some type of digital character? He's just unbelievable, and I just love watching him pop up in different projects.

William Brent Bell: He is unbelievable. I knew I wanted to bring that character to life and work with a contortionist, so then it became a question of, "Well, which contortionist?" And Troy James is just incredible. Everything, from his costume to his makeup, and the way he could emulate the puppet and comic drawings, was perfect. And Troy is an example of someone who is the nicest, most affable artist you’d ever want to work with. He’s this guy with this amazing skillset who is doing these amazing things with zero help. With zero wires. No visual effects. No tricks. It was perfect. So, having Troy involved with Separation made all the difference in the world. It just really does. And I'm excited to see what he keeps doing, because he is amazing. 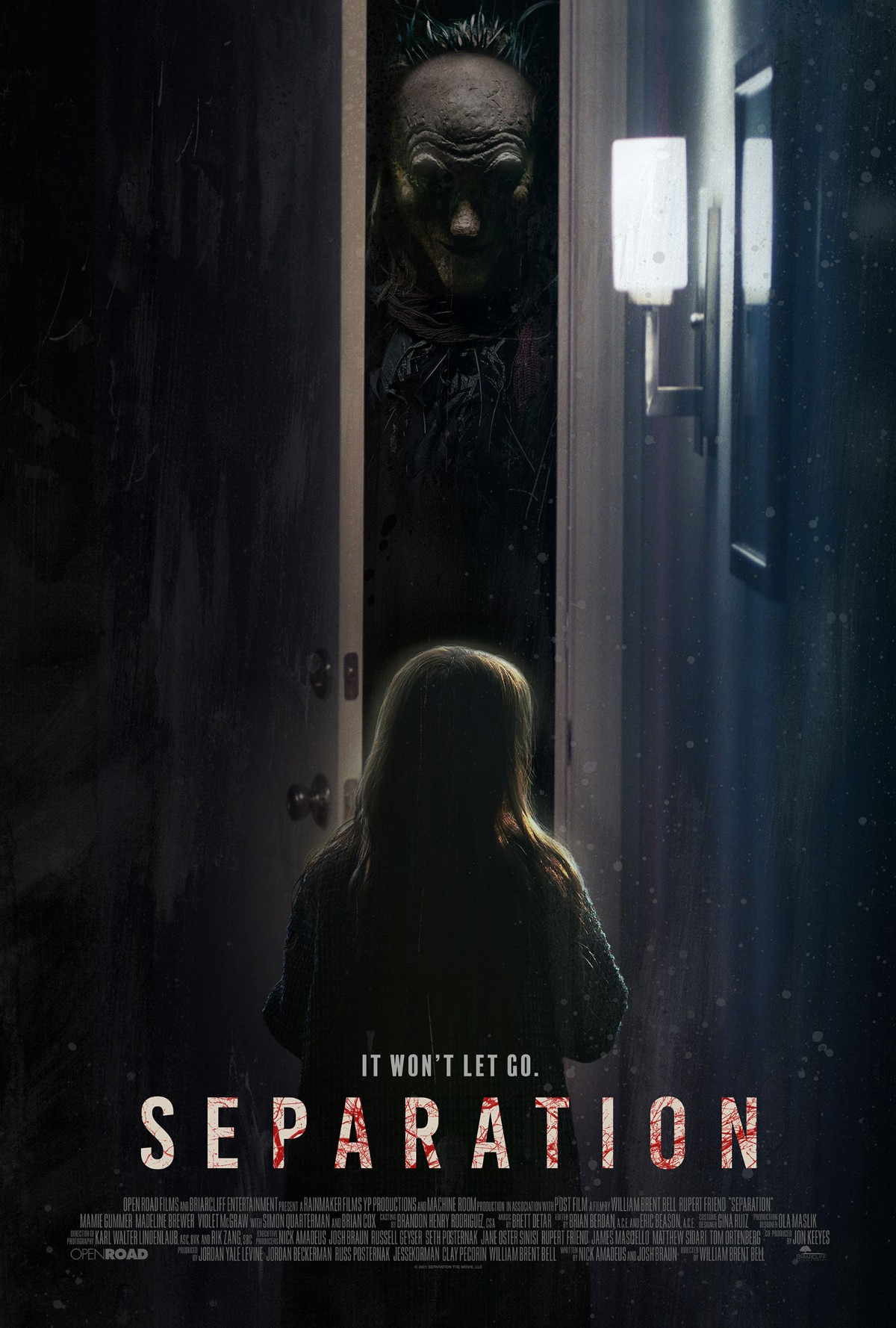