Arriving on VOD and digital platforms today is the heavy metal horror flick We Summon the Darkness, from director Marc Meyers and writer Alan Trezza. The flick is centered around a trio of women (played by Alexandra Daddario, Maddie Hasson, and Amy Forsyth) who head out for a metal show and pick up a trio of guys (played by Logan Miller, Keean Johnson and Austin Swift) for a fun night of shenanigans that take a deadly turn, leaving them all wondering just who will be left standing by the end of the night.

Daily Dead recently had the opportunity to speak with Daddario about her involvement with We Summon the Darkness, and she talked about the initial appeal of the project, her thoughts on collaborating with her co-stars and with Meyers, as well as how much hair and wardrobe really felt essential to her when it came time to prepare for her role.

Also, be sure to check out Alexandra’s Instagram account (@alexandradaddario) later today for a live Q&A where she’ll be talking all things We Summon the Darkness, beginning at 9pm EST/6pm PST.

Great to speak with you, Alexandra, and congratulations on the film. I’d love to start off having you talk about what was the initial appeal for you going into this project? Was it your character? Subverting audience expectations? Working with Marc? Or a combination of those things?

Alexandra Daddario: It was a combination. I had done a film by this writer Alan Trezza a few years ago with Anton Yelchin called Burying The Ex, where I’d worked with one of the same producers from this film. I had had such a positive experience on that project, and that initially drew me to it. Plus, getting to work with Marc Meyers, who is an incredible director, I was a big fan of his work, too. I like to play and I liked the elevated absurd world with the way that this film was written, so just getting to let loose and be wild was fun, and I felt that Marc was great at guiding us all through that, too.

I thought the back and forth between you and both Maddie [Hasson] and Amy [Forsyth] was great here. Did Marc give you a lot of time to come together as a group before you started shooting, or did it just happen organically through production?

Alexandra Daddario: It was definitely organic. We didn’t have enough money y’know... we had to just sort of jump in and immediately get started. So... I’m lucky, I find that actors tend to be very open, I find them to be very non-judgmental of each other, at least on set. As far as part of our jobs is to connect, that doesn’t mean everyone’s going to be best friends, but this entire cast was so great at doing that. Maddie and Amy and I are still friends, and we had a great dynamic. They’re very, very talented, very silly, a great sense of humor and I felt really lucky to work with them and have them as friends because I think the dynamic shows on screen.

Costumes are important to any production, but the ones in We Summon the Darkness are purposeful in a very different way. How great did it feel to slip into your outfit and did it help you when you were working through your character?

Alexandra Daddario: Oh, for sure. I mean, A) it’s a period piece set in the ’80s, so for all of us, it really helped. The other girls were born in the 1990s, and I was in the 1980s for only four years, so I don’t have a memory of what that looked like. But having a wardrobe person who knew how we should look and having people who knew exactly how our hair should be was essential and helped us all so much. Our hairstylist found a crimper in a box at the back of her closet that she used to use in the ’80s, which was great. Wardrobe and hair are both a huge part of every role that I do, so it’s always very important, but it really felt essential here.

Before we go, I was hoping you could talk about working with Marc and your experiences collaborating with him for We Summon the Darkness.

Alexandra Daddario: He’s great. He’s really a very strong director. Directing is very hard and you have to be good at keeping a set under control, you have to be good at dealing with actors, and good at dealing with producers. You have to be able to get what you want, especially on a film like this with a limited budget, and I found him to be really level-headed and great to work with creatively because he knew what he wanted and he knew how to get it. He was also really generous to all the actors, and I was really grateful to have gotten the opportunity to work with him on this. 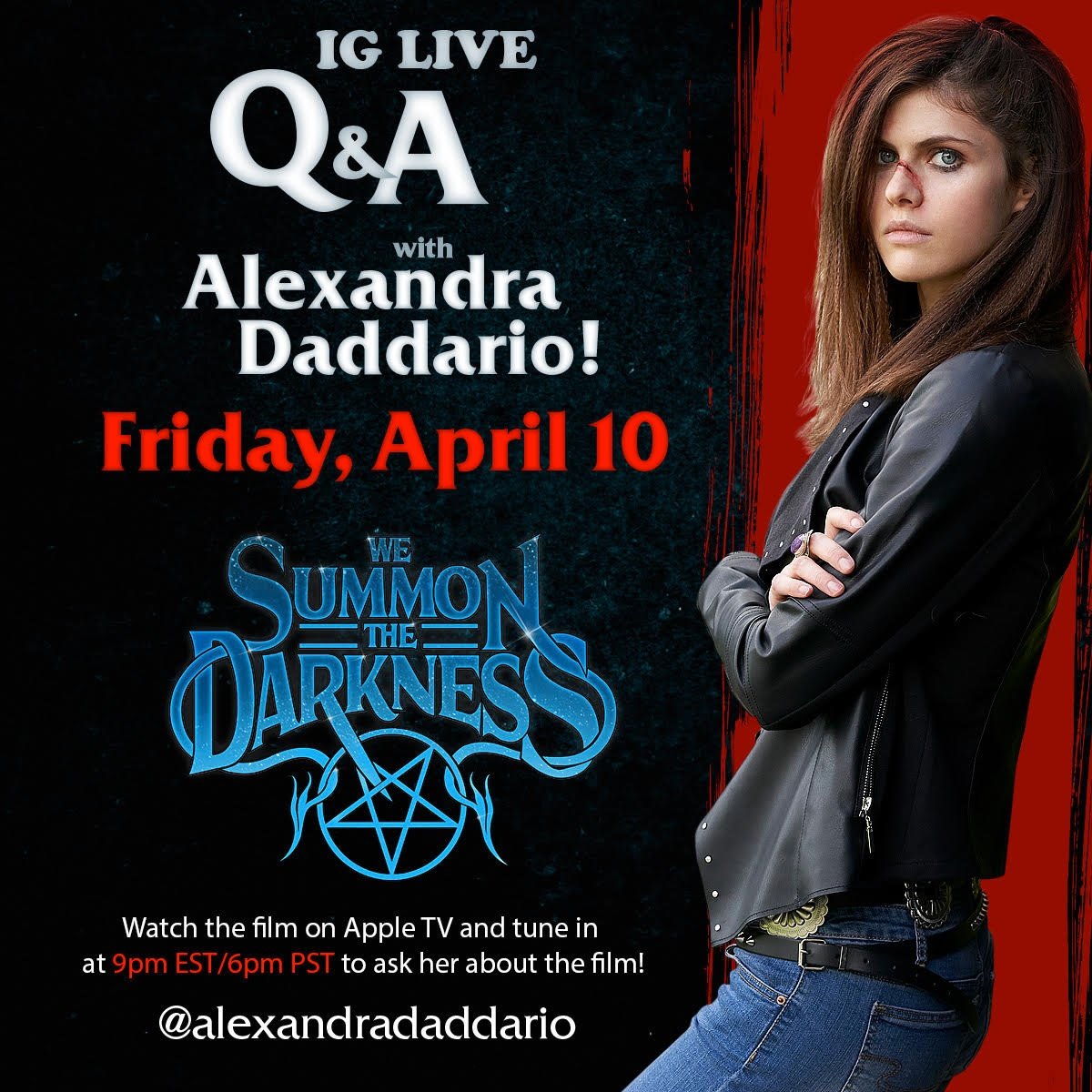