Ever since the first issue was released in October 2019, Count Crowley: Reluctant Midnight Monster has been something I've been recommending to horror fans of all ages. A love letter to our favorite genre that feels fresh, subverts expectations, and has a compelling main character, I've been dying to see what's in store for Jerri Bartman and, thankfully, Count Crowley is back in Count Crowley: Amateur Midnight Monster! With the first of four new issues out now, I had the opportunity to talk with David Dastmalchian, who was excited to talk about the new series, discuss his creative process, and tease what's to come!

Count Crowley: Reluctant Midnight Monster is such an incredible graphic novel. We only got four issues and, along with myself, I know fans have been dying for more and we finally have Count Crowley: Amateur Midnight Monster Hunter #1! For our readers who may not have caught the first issue of the new series yet, can you tease where Jerri's at and what she faces in the first issue?

We pick up exactly where we left off at the end of volume one of Count Crowley. Jerri Bartman, who thought she was going to be a big time news anchor, is now relegated to being a small town horror host. She's devastatingly self-destructive with her alcoholism and she's had to face the humbling realization that she needs to go to AA meetings to salvage her relationship with her family. To top it all off, she just found out that monsters are real and they’re trying to seek vengeance against humanity in a way that she doesn't understand yet. And nobody knows the truth except for a very small group of people, The Appointed Ones, who are monster hunters that are allowed to have this secret knowledge.

Jerri now has this knowledge and there's something about her that makes her really good at defending herself against the monsters she's faced, which, if you did read the earlier issues, have been a werewolf and a “billy,” which is actually the term for a zombie in the world of Count Crowley. Jerri is at her first AA meeting, she’s trying to put her life together, and sort the pieces of the fact that she now knows that monsters are real, and sitting across the room from her at her AA meeting is the dude who she watched turn into a werewolf the other night…

I was also really excited to see that the first new issue also gives us a good look at vampires in the world of Count Crowley.

The disappearance of the zombie that Jerri killed in our previous stories led to the investigation by a much more powerful monster, our first introduction to a vampire. Vampires are going to be very important in the world of Count Crowley, although they are very different from the ones we've come to know, because everything you thought you knew about monsters has been a lie. They've been feeding us false information for generations. So you can't stop a vampire with sunlight, a cross, or a wooden stake. All that's total baloney that the vampires put out into the universe so that people would think they knew how to stop them when the time came. So Jerri also has to figure out how to actually immobilize the undead, and it's much harder than just shoving a pencil through their atrium.

Having read the first issue of the new series already, it really got me excited for what’s ahead. You have these familiar monsters, but are able to mix them up in a way that feels really fresh. When it came time to map out this second series, was this something that you kind of had pretty much locked in after the first one? What was the creative process like?

I already know where Jerri and the journey of Count Crowley is going for the next several years. If I had the gift of people going out and continuing to support Count Crowley and Dark Horse continues to let me publish the series, I know where I would like to take her and this world for years, through 12 different plot developments. I'm trying to really build out something that I can't wait for people to see as it's revealed. There's a big picture to this that I think is really exciting and ties everything together in a really cool way. That being said, I do listen to the input and influence of my friends and family, who are my inner circle of critics and collaborators. I listen to what the readers say and I listen to the feedback that I get online.

People responded really strongly to this idea that, like you were saying earlier, the monsters in the world of Count Crowley remind us of the monsters we know. There is something nostalgic about the way werewolves, vampires, and zombies look and feel in Count Crowley. I want them to look and feel the way that reminds us of what we fell in love with when we saw our first horror movie. It's important to me that, even though they look, feel, and move like we think they should, their truth is quite different than what we've ever known before. How to stop a monster and what they can do is totally different from what we've been taught. We've also been taught that monsters must be destroyed and Jerri, on her journey of recovery, starts to realize that she has acted like a "monster" because of her addiction and untreated mental health issues. As she starts to get through this journey of recovery and becoming the person she was always meant to be, she's going to recognize that there are people who are monsters, who are actually good and maybe they just need someone to help them. That's really important to me.

The monsters may be what gets readers initially excited for the series, but what keeps people coming back is Jerri and her development throughout the series. It’s been a pleasure to watch her character grow over even just a handful of issues and I’m super excited knowing that you have years worth of stories planned out for her.

Jerri is just this badass, sloppy, barely sober woman in ripped up jeans and combat boots and a Bauhaus T-shirt trying to figure out how you fight the undead. There is a tradition with female monster hunters being sexualized, but my instinct with Jerri was that there is really nothing sexualized about Count Crowley. Not to say that there's anything wrong some of that iconic imagery that we all were raised with, but I wanted to give a different approach that people can identify with. I want everybody to be able to see themselves in Jerri and I am Jerri in many ways to myself. To me, she needed to be a woman, but there's so much of me in there. If anybody knows anything about my battle with addiction and depression, the mistakes I've made in my life, the screw ups, and the ways I've let down my family and hurt people, and yet I still was able to find redemption through art and recovery and finding my purpose. I want that to be Jerri's journey.

So everybody who's a Daily Dead reader, please go to your comic shop. Get your Count Crowley because if these keep selling and people keep responding to them the way that they have been, there's so much I want to tell, there's so much story. But you know what? You have to write each issue as if it's your last and I have the best team of monsters around me who help me. My editor, Megan, my artist, Lukas, my colorist, Laura, and my letterer, Frank. I hope you can feel all the detail we try to put in there and the stuff that's supposed to evoke the horror of the eighties, cinema, VHS horror, the stuff that's meant to evoke feelings of complex character relationship and ideals, all that stuff, we want to put into every issue.

If we keep achieving what we've been able to do, then hopefully we'll get to do it for many years to come because there are so many things I want to share with the audience that have been growing in my imagination for Count Crowley.

Can you talk a little bit about your collaboration with Lukas and your creative process? I’ve been a fan of his work and art style for years and it seems like such a great match.

First, I want to give a shout out to the power and importance of an editor. They are definitely there for much more than correcting your bad writing or telling you, "No." My editor, Megan Walker, is the brains of the Count Crowley operation. When I showed her my extensive mood boards and documents that I created, all inspired by Bernie Wrightson and Creepy magazine and all the stuff that I love, she said “I think it should be Lukas Ketner."

I outline each script, then I create a 2-3 page document, which is like a treatment, written in prose form. When I'm doing that, each paragraph I will accompany with research art that I have found from movies, old comics… you name it. Megan reads that document, gives me her notes, we finalize it, then I write the script. Most of the time, what I'm trying to write is just the emotion, the psychology, the relationships, and the dialogue. Then Lukas just takes that and he makes magic and he makes it all come to life.

I’m very excited to see what’s in store for Jerri over the next three issues. Can you give us a tease of what’s ahead?

Dark Horse really let me take off the gloves on this new run. So in volume two, I don't know how we got through the censors on some of the stuff. You're going to see the gore factor escalate by tenfold and if anybody's familiar with Lukas Ketner's work, you know that he can push the limits of what can be put on a page of a comic book without just literally dripping blood off the page. But this is his most visceral, just eye-popping work.

When I was writing some of the stuff, I kept saying, "I know that they're going to come down on me and say I can’t do it." And Dark Horse and Megan just kept saying, "You justify it with the character development and the plot, so it should be there." I'm wondering if comic shops are going to be putting a warning label on the upcoming issues. That's all I can say.

And if you haven't caught up on COUNT CROWLEY: RELUCTANT MIDNIGHT MONSTER HUNTER, make sure to check it out: 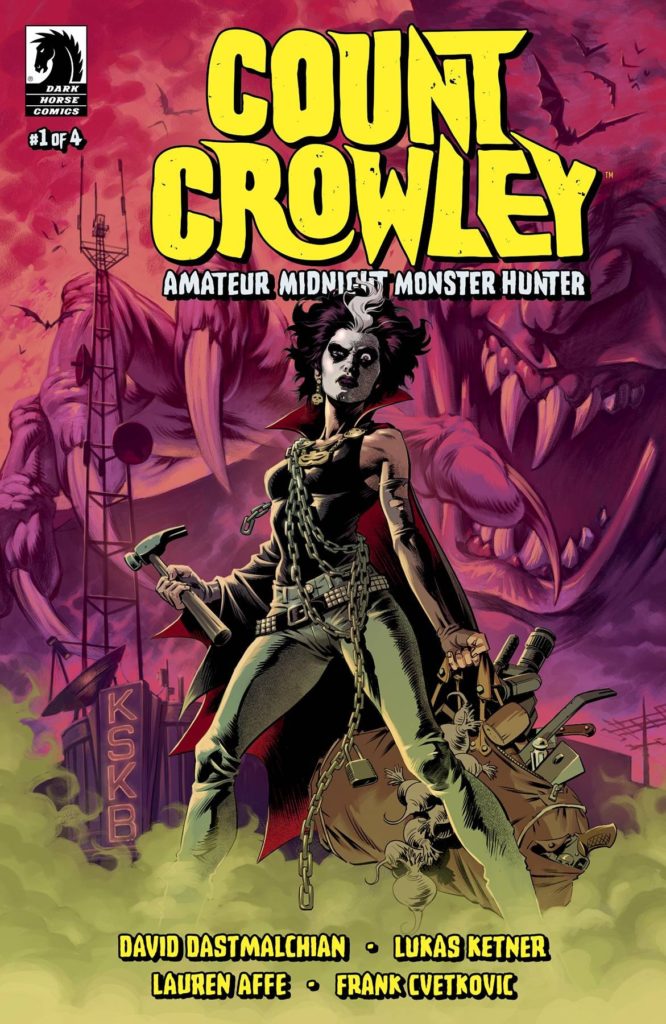