The first installment of David Weiner’s behemoth of a documentary, In Search of Darkness, instantly distinguished itself as a definitive exploration of ’80s horror and a “temple to the genre gods.” In case four-and-a-half hours and discussions of roughly 80 horror films didn’t satisfy your bloodlust, David Weiner is back with his upcoming continuation, In Search of Darkness: Part II.

Daily Dead recently had the distinct pleasure of sitting down with Weiner to get some insight into that special kind of madness that compels someone to undertake such a huge project… again. In our conversation, David Weiner discusses his personal relationship with the horror genre, memorable moments from the creation of both films, and offers his expert opinion on the perfect Halloween double feature!

In our communication, setting up this interview, one of the things that we touched on is that you and I are both involved in a torrid love affair… with the horror genre. And I use the term “love affair” because being a fan of horror is definitely an exercise in devotion and passion, as you show in your documentaries. Can you tell me about your earliest experiences falling in love with the genre and where that lifelong love began for you?

David Weiner: The lifelong love affair began with eating monster cereals for breakfast and watching a little black-and-white television that showed everything from Universal Horror to Godzilla and everything in between. I was very fortunate that I had very supportive parents who saw that I loved it and encouraged me to watch as much as I wanted. They had no aversion to it, so I got to dive into that world. Whenever I’d catch any of these movies on television, I’d watch it!

I was a monster kid, through and through; I read Famous Monsters of Filmland magazine and I’d put together models, the first I ever bought was Frankenstein’s Monster. I was very fortunate to have lots of friends that enjoyed this stuff, too, and we would could talk about it and play. Honestly, I could go through an entire evolution.

You’ve created the definitive work on ’80s horror, just a massive project. You dig into the icons of the ’80s in In Search of Darkness and you get into every facet of that period, which is so culturally significant for horror. You explore everything from the culture of video rentals to the role of women in the genre. That’s a lot of ground to cover, which makes it hard to believe that there’s any ground left untouched. Yet here you are with In Search of Darkness: Part II. What can we expect out of the film?

David Weiner: It’s a tall drink of water, I admit! Part II is this wonderful canvas for being able to continue a story that is so large that even a four-and-a-half-hour movie couldn’t contain it. I feel like I’ve only just scratched the surface.

When I wanted to tackle the ’80s, which is an intimidating prospect even beyond the films, there’s the films themselves and the world surrounding them at the time. The fandoms that grew out of it. Just so much going on! In Search of Darkness: Part I is so North American centric, which was a specific choice because there’s so much to cover. I welcomed the opportunity to examine Italian films, horror out of Hong Kong, New Zealand, and Australian horror. Films from all around the world that made an impact on American filmmakers, which created this larger cycle.

We filmed so much material for the first one: over 50 people, with sit-downs of an hour or more. So, in condensing that, it was obvious that there was just a wealth of knowledge and discussion that was waiting to be seen and heard. I wanted to continue the conversation and include those voices, as well as bring in some new ones. Figures like Robert Englund, Tom Savini, and the list goes on and on, and given our restraints due to COVID and not being able to shoot for three months, once we were able to go out, I was so excited to be able to speak with these people.

I’m so glad you touched on the huge amounts of people involved in this project! One of the most impressive things about your documentaries is how you’ve been able to pull perspective from the great creatives and filmmakers, even Daily Dead’s own Heather Wixson! I have to ask… which of those guests holds a special place in your heart?

David Weiner: I hate playing favorites! Everyone offers such great insight and it’s always a pleasure to be in the presence of all these different people. I’d have to say Tom Savini has been on my radar for as long as I’ve been flipping through the pages of Fangoria. Tom was someone I had approached for the first film, but we could not get together in time.

So when I had the opportunity to make a second film, he was the first person I approached. Robert Englund was very much the same way, he had seen the film, he enjoyed the film, and even went the Hollywood way of telling me, “It’s a hit and I like being in hits!” It’s very flattering to have these figures that I worship want to be involved.

It is October, that magical time of year where those of us that dwell in the realm of horror year round welcome tourists—people that are approaching horror, if not for the first time, with limited experience. Outside of the horror community, the genre is sometimes seen as controversial. As someone so well-versed in not just horror movies, but in their cultural impact, what would you say is misunderstood about the genre?

David Weiner: That’s right! Visitors are welcome! I could use my mother as an example. My mother does not understand the horror genre, nor does she really respond to the fantastic. As a viewer, she connects with drama. I’d explain to my mother that the people who love horror and gore and kills are not necessarily serial killers. A lot of people laugh a statement like that off, but deep down they wonder…

It’s important to explain and differentiate between the fantasy and reality of what’s shown in horror. It’s cathartic to be able to connect with the horrors on screen and sort through how you process them, in a space that is safe. You can see it play out on screen. It’s like a roller coaster. You can be thrilled and transported, but when it’s over you walk away.

Personally, I love disaster movies. Horror movies are like that in that you can project yourself into a situation and react along with the characters. You ask yourself, “What would I do, if that were me?” It’s fun to identify with characters, or learn from their mistakes. I think people don’t always appreciate that there is lots to draw out of horror. When it comes to blood and guts, it’s as much about the artistry that goes into making that happen.

I know that’s a long answer…

I love it! Horror is a complicated genre, even though some view it as low-brow, it offers so much to those that appreciate it. Moving beyond In Search of Darkness, you have another subject matter documentary coming up: In Search of Tomorrow. Please tell me more about the bridge from horror to sci-fi!

I was a sci-fi kid just as much as I was a monster kid. I loved Star Trek, Planet of the Apes, Battlestar Galactica, and Soylent Green. I loved that stuff! Whether it was Orwellian or a total fantasy. Star Wars took me from an enthralled moviegoer to someone who wanted to know more about the craft and how movies are made. You learn that these movies aren’t actually shot on the moon, but you learn all about the craftsmanship and effects!

Your In Search of Darkness: Part II campaign has been running through October and ends at midnight on Halloween. Here’s a scenario: it’s Halloween and you’ve been put in charge of putting together a drive-in double feature that encapsulates all that is Halloween. You’ve got to stake your reputation on it, bringing forth all of your knowledge. What two films do you choose?

David Weiner: You realize you’re talking to the person who thought that one film, covering 80 movies, was not enough?! I’d have to go with the obvious choice of John Carpenter’s Halloween (the first one), even though I always want to lean towards the eccentric. I could pick something eclectic, but nothing says Halloween better than Halloween. Setting, atmosphere, music… it’s all there. It gave birth to the slasher, in my opinion.

With that, I’d have to pair that with Michael Dougherty’s Trick ’r Treat. Trick ’r Treat has finally gotten its due and I’ve always thought that every episode of the anthology is solid and creates this amazing character in Sam. I really responded to that. I think that makes for a double feature that would have audiences looking over their shoulder as they left for home.

In Search of Darkness: Part II promises to dive even deeper and go even darker. The film is available to pre-order, with brag-worthy surprises in store for horror fans who order by midnight on Halloween! To learn more, visit: 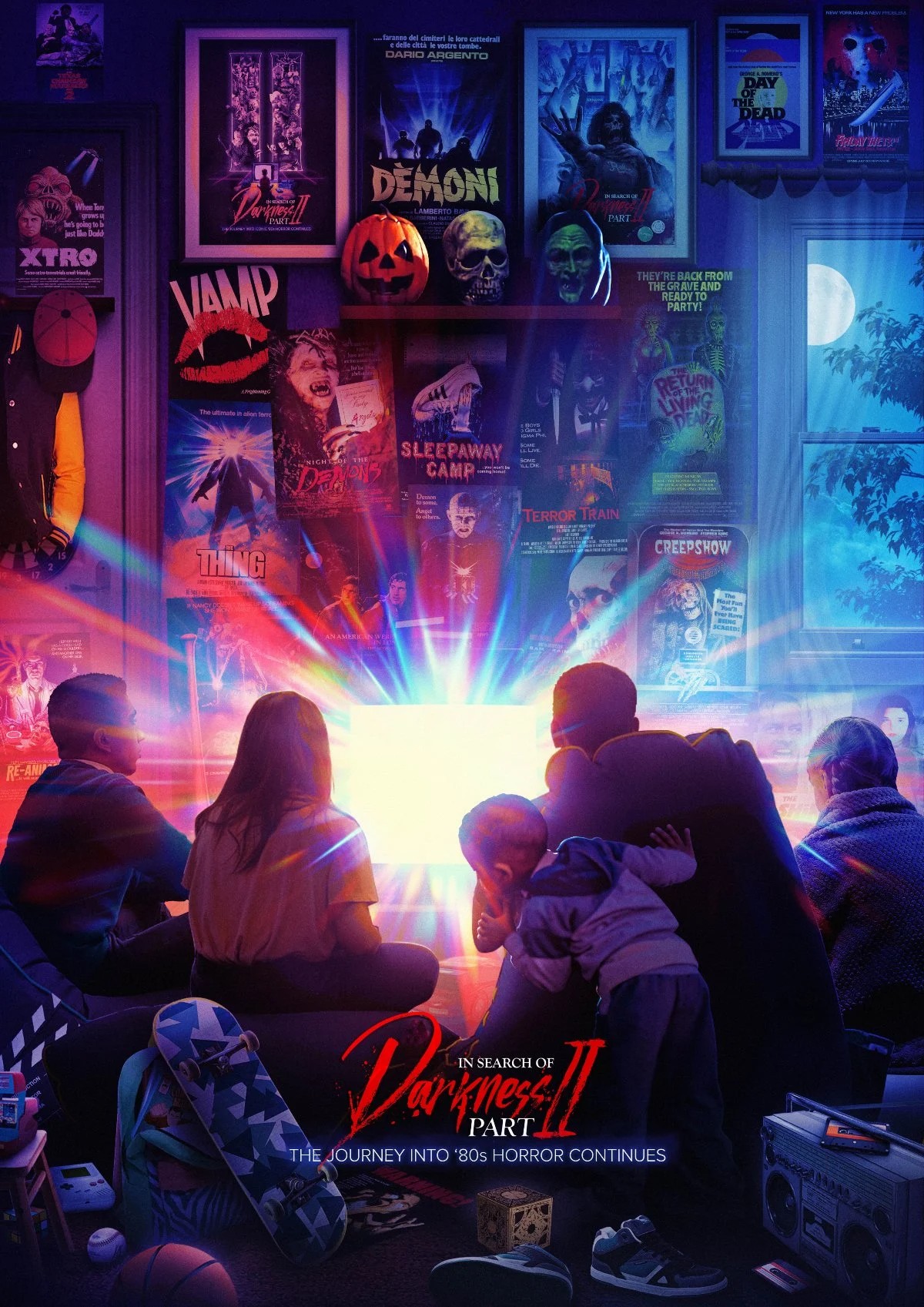