Interview: FX Legend Todd Masters on 25 Years of DEMON KNIGHT and the Evolution of the Visual Effects Society

Tonight, the artistry of practical effects are being celebrated at a very special screening event that’s not only celebrating the 25th anniversary of Tales from the Crypt: Demon Knight, but also a huge milestone in the industry, as it was recently announced that the Visual Effects Society has reinstated the “Practical/Special FX” award for their annual awards ceremony.

For Todd Masters, the “Masters”mind behind the special effects in Ernest Dickerson’s Demon Knight, he’s thrilled by the inclusion, but is quick to realize that it’s just one small step in the right direction.

“It is exciting that the VES is finally accepting practical effects, but it is one category encompassing both television and film, so I do think we have a ways to go,” Masters explained. “It also seems to be taking every aspect of practical effects, including pyrotechnics and things like that, in addition to makeup effects. But it’s a great start, though, so it is exciting. We actually had talked about doing this at the beginning, because I’m actually a founding board member, alternate, of the Visual Effects Society.”

“We started the whole thing when we had a little trouble on Star Trek: First Contact, and as things percolated, we just got together with all these people who had been talking about it and developed this thing almost 25 years ago. I’m surprised it took this long, and there’s definitely still more to develop there, but we wanted to take this opportunity to honor practical effects.”

“The intention was that visual effects are the digital post-production kind of stuff, but we all know it is so much more than just that. Practical effects are done on camera, so it is a visual effect. So, it is great that they’re starting to see us more now, but when we started, I certainly was the only makeup effects person that was involved. We tried for many years to make this change, especially since their logo is the Man in the Moon from the George Méliès film, which was the first-ever practical effect. So, we thought we wanted to highlight that and tie it into the fact that Demon Knight is turning 25, which is pretty cool, and it’s still one of my favorite movies I’ve done in my career.” 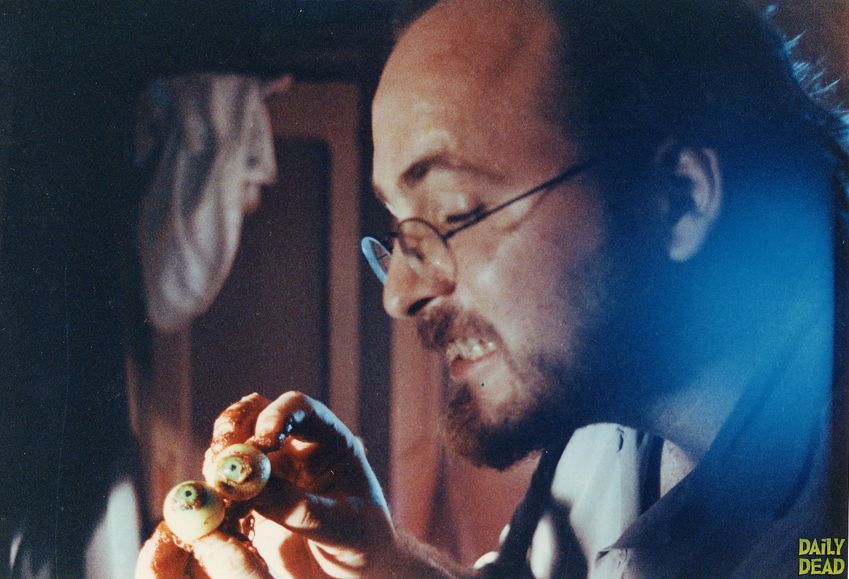 While working on Demon Knight, Masters and his entire crew were tasked with summoning a slew of demonic beasties for the first Tales from the Crypt feature film project, although the memorable creatures almost didn’t end up making it onto the big screen. “I think I had just wrapped season 4 of Tales from the Crypt, and that’s when I got the script for Demon Knight. I thought, "Oh, goodie—a demon movie! This will be fun." I read it, and got excited and turned my budget into Gil Adler. He called me up a week later to tell me that he had a new version of the script for me, so I read the new script and it had every single demon cut out of it. All the effects were cut out of it, and everything was really toned down.”

“All the demons in that version were what I called the "Blues Brothers," where they were wearing dark glasses and dark suits, so they were like the Men in Black, the C.I.A. There were only a couple of times when they would get shot or tilt their glasses down where you’d see the hellfire in their eyes. It was silly stuff, so I went back to Gil and said, "We’re Tales from the Crypt. We can’t do a demon movie without any demons." I asked them to give me 24 hours to come up with a new way to do demons, and I came up with this idea from just looking at my staff, because they were all scrawny kids at the time.”

“We decided to take photos of these skinny guys in demon poses in their underwear, and using computer drawing software, Scott Patton and I drew onto them demon heads and demonic hands, and covered up their underwear, giving them tails and then cloven hooves, too. All of a sudden, it’s just a big makeup. And because the demons only worked a certain amount of days, it wasn’t that big of a deal. That’s how we ended up getting our demons, and it ended up being two of our shop guys—our lab assistant and our runner—and two stunt guys playing demons in the movie.” 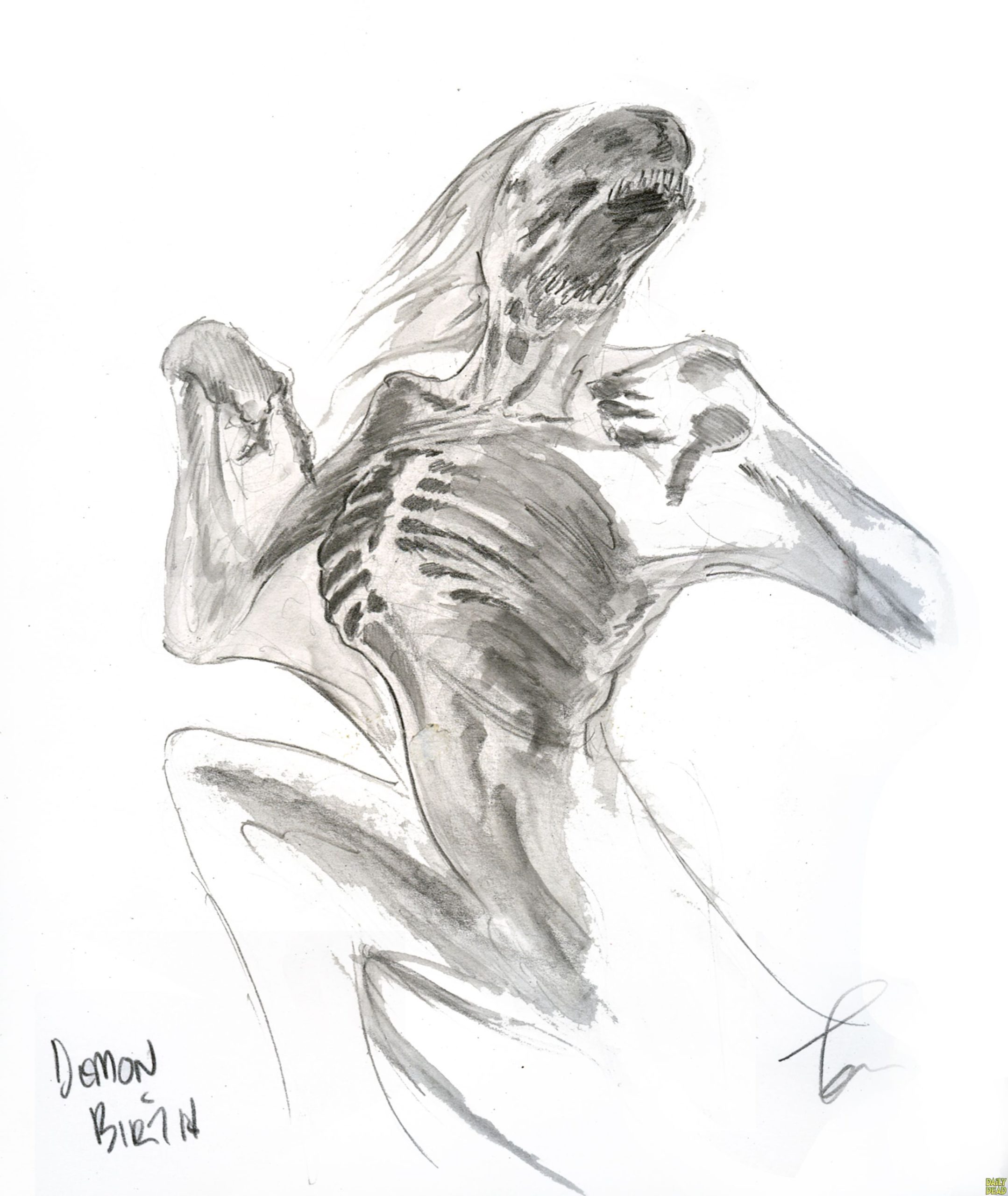 One tool that really helped Masters, his crew, and the performers to pull off the otherworldly demonic performances necessary to bring the creatures to life in Demon Knight was the utilization of leg extensions, which are commonplace these days, but that wasn’t always the case.

“Back on Dead Heat, we did this cow monster and it had arm and leg extensions,” recalled Masters. “This was right after all the initial craziness with what happened with the effects the first time around on Predator, too. Leg extensions were the talk of the town then because no one could really do it. Even on Pumpkinhead, they often had to use this huge crane for certain shots. So, on Dead Heat, Tony Rupprecht had this cow monster suit with these front leg and back leg extensions, and at one point he stood up and started walking around on his back legs.”

“It was amazing, but I kept telling him to cut it out because I didn’t want people to know we had figured it out [laughs]. We even secretly engineered leg extensions for The Howling IV. After that, we realized they were huge, so we came up with a simpler design and that’s what we used on Demon Knight.” 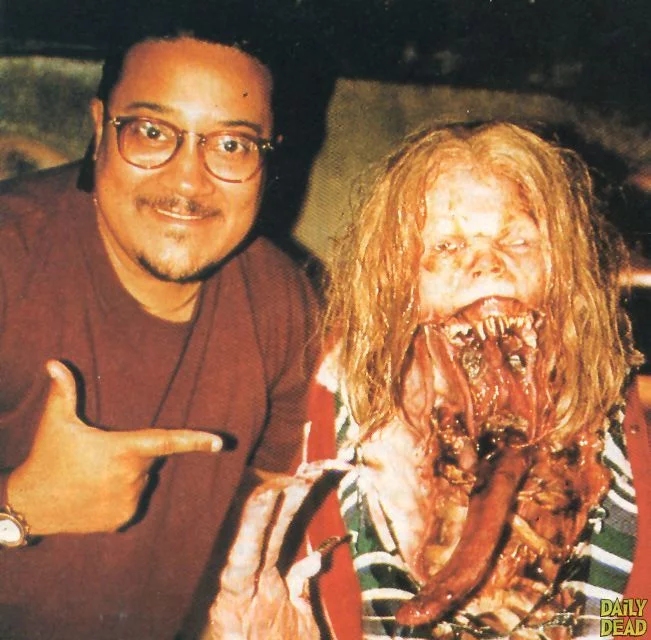 To Masters, Dickerson’s mastery behind the camera over the years was yet another huge asset working in the favor of Demon Knight, and he discussed how the entire crew on the film rallied together despite all the odds stacked against them. “We didn’t have any real prep time on this film; when we got that first script, then the second script with no demons, and then I came back to them with the idea for how to do the demons a short time after that, the start date never changed or adjusted for all that back and forth. So, we had no time and we were literally making stuff as we were shooting. Lunch times were always meetings. We would get together with Rick Bota the DP, Gil, and Ernest, and so everything was just go, go, go. There was no sleeping during Demon Knight.”

“But because Ernest came from the world of cinematography, he really knew how to shoot stuff and he knew what to dip into, and what not to dip into. That was hugely beneficial. Something else that fans might not realize is that Ernest is also this huge Ray Harryhausen fan, so he wanted Demon Knight to have as many of these Harryhausen moments in it that he could, and he knew how we could achieve that in camera. In fact, the demon version of Billy Zane at the end is very much our version of the Hydra from Jason and the Argonauts.” 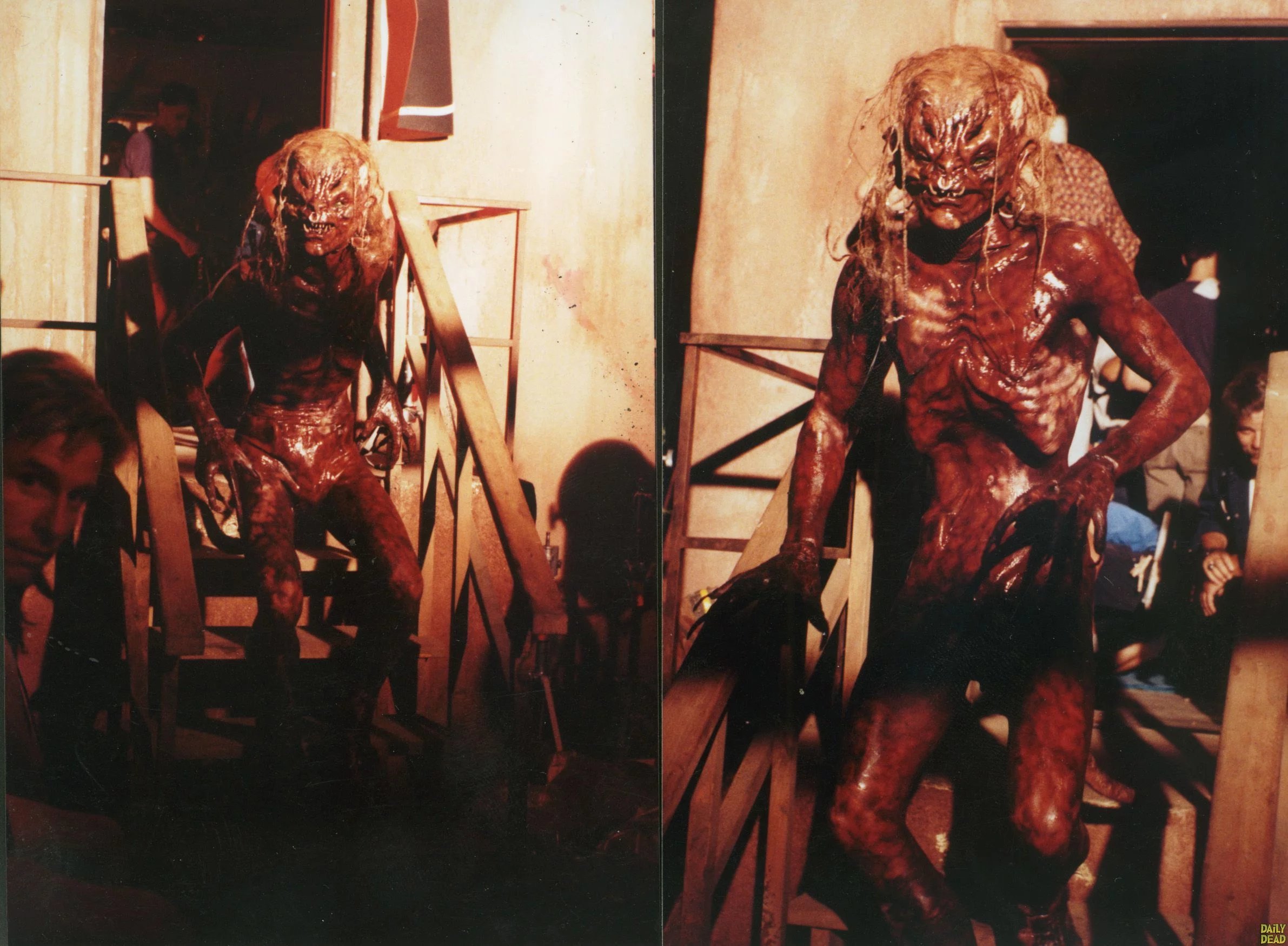 “Demon Knight was really hard to pull together,” Masters continued. “It happened right at the dawn of digital effects coming in and allowing us another palette to play around with. So, it was John Van Vliet [visual effects supervisor] and myself just working together to try and make some weird shit for that film. It was a whole new beginning for us, so it seemed worthy for us to celebrate for its 25th anniversary, since movie theaters are museums for those of us who work in the industry.”

“I love what Demon Knight was for our company. I love that we survived it. And I love that at the end of the day, the movie just really works. The cast and the crew, we all still talk to this day. I had dinner with Charles Fleischer recently, I see Gil Adler all the time, I see A. L. Katz every so often, and I talk to Ernest [Dickerson] now and again. Whenever we bump back into each other, it’s like we’re right back there in the trenches, hand in hand, spreading goo all over the place.”

Hosted by Todd Masters and his Masters FX team, Tales From the Crypt: Demon Knight will be screening later tonight at the Arclight Hollywood Cinema.

In case you missed it, visit our online hub to read Heather Wixson's previous retrospectives on Tales From the Crypt: Demon Knight and to view a full gallery of behind-the-scenes photos from the making of the movie.