Interview: Richard Stanley on the Visual Challenges and Alien Influences on COLOR OUT OF SPACE

Last year while at the 2019 Fantastic Fest, this writer had the privilege of speaking with filmmaker Richard Stanley for his latest film, Color Out of Space (you can read part one of that interview HERE). After a successful festival run, the H.P. Lovecraft adaptation is headed to theaters this Friday, which makes it the perfect time to catch up with the second part of our interview with Stanley, who discusses the challenges he faced in bringing the monster from Color Out of Space to a visual medium, his approach to the sound design in the film, and how extraterrestrials influenced Color as well.

Look for Color Out of Space in theaters this weekend, courtesy of RLJE Films.

When you're dealing with Lovecraft, or really any literary works, it can be so hard to visualize the elements on the page and try to find that happy medium between these fantastical elements that conjure up images in your imagination and how they translate to the big screen. Can you discuss approaching the visual style of this movie? Because it's very ambitious, and I think it turned out great.

Richard Stanley: Well, I knew in advance we were going to have to show the monster, that we would have to bring the thing out of the well. A lot of folks, particularly the fan base, were always going on about how you shouldn't show it. It's to be subtle or tasteful of one thing or another. But Lovecraft himself always shows the monster in most of his stories, where the monster usually shows up in italics in the last paragraph. And the characters usually go mad or die as a result of what they've seen. It seemed to me that it would be super unsatisfying if we didn't actually bring the thing on. So, that challenge was always there from the beginning. I also knew that whatever we brought on would be impossible to deal with, but it had to be impeccable.

I've got my plush Cthulhu, who I sleep with back home. I knew that whatever happened here, it couldn't be cuddly. So, it was utterly impossible to deal with. Fortunately with Color Out of Space, we've got some clues because Lovecraft, for instance, said very positive things about Virgil Finlay's artwork from the early Weird Tales magazines. And there's a beautiful Virgil Finlay plate of the creature coming out of the well in Color Out of Space.

Because Lovecraft approved of that, I duplicated copies of that plate and sent it to all of the effects people and said, "It's got to be like this." It gave us a strong clue as to what Lovecraft was thinking. Then beyond that, the color scheme is based very much on ultraviolets and infrared that are the extremes of the human visual spectrum and we literally can't process information beyond that point. I don't think the thing really is ultraviolet or hot pink infrared in real life. But it's simply as close as we can get to perceiving the damn thing.

It's the three-dimensional shadow of the ultra-dimensional relative. Just as ultrasound and infrasound are the low rumble and the high-pitched squeal at the outermost extremes of the auditory spectrum. We can't make the movie in Smell-O-Vision, but it's a similar thing with the olfactory spectrum. Nicolas [Cage] was picking up on the smell of the thing. I wish we could have issued scratch cards to the audience so they'd have the rubber smells and the sickly, sweet smells of all these different things. That again would be indicating some kinds of ultra-dimensional intrusion into our reality or something, where we were messing with space and time.

You mentioned the auditory spectrum, and the sound design in this movie is so crucial as well. Can you talk a little about finding the sound of this entity, and ultimately the sound of this reality? It’s absolutely unreal at times, which I think really heightens all the other elements at play here.

Richard Stanley: Yeah, it's a very unifying sound design. It's something we're literally still working on right now because we're still remixing the movie. By the time it shows up on general release, I think it's going to go one more pass in the mixing studio since we were working on this right up to now pretty much. The idea was always to have this thing there—present in the background, but in a way that doesn't become clear until the later reel. Like what Jack is whistling with the thing in the well, it was the same theme of sounds that we'll be sharing in the last reel, but cranked up to the max. I liked the idea that everything is moving to a signal, which we're barely able to perceive, but which harmonizes everything that I imagined.

Even the trees and the grass are dancing to the same tune, which is pretty much the morphogenetic field of the colors world. The signal, the holding pattern, that holds reality together, it starts to invade this one. It feels like we're caught between channels for part of the movie, like they were changing the tuning on planet Earth into something with a frequency, which is more an alien frequency. Something which is coming from the realm of the Color, which I feel its coexistence with us. I don't think it's on the other side of the universe. I think it's something which is just simply in another channel of our world.

I'm a big fan of John Keel, who wrote The Mothman Prophecies, and introduced the term ultra-dimensionals or ultra-terrestrials as a result of his UFO investigations. There is a lot of stuff from different UFO cases that leads into different aspects of Color, too. I thought, “Okay, if we can just get beyond the idea of a technological craft or shy strangers from another galaxy, and then try to look more carefully at the side effects of these ultra dimensional encounters between alien contactees and whatever it is, there’s some kind of truth hidden in there.”

Visit our online hub to catch up on all of our coverage of Color Out of Space! 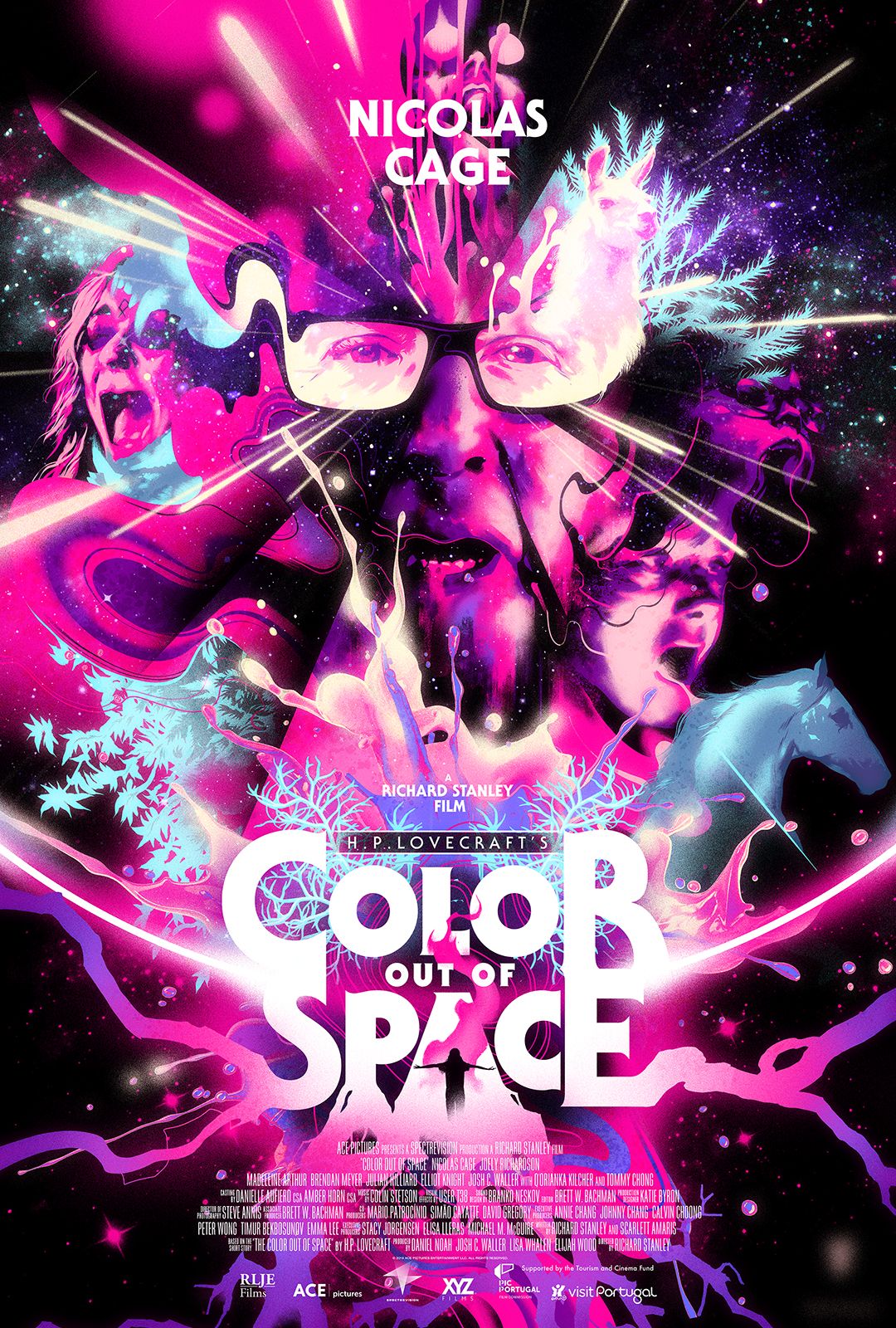