"It's showtime" over at Mezco Toyz, as the company is summoning the "ghost with the most" like never before with a new Beetlejuice mega scale talking figure that includes seven phrases made famous by Michael Keaton's iconic character from Tim Burton's 1988 film.

Priced at $98 and due out sometime between October and December of this year, the Beetlejuice mega scale talking figure can be viewed in the gallery below. To learn more, visit:

"You're working with a professional here!"

Beetlejuice is back and this time, he has a lot to say.

Depress the button discretely hidden on Beetlejuice's back to hear the obnoxious apparition speak a total of 7 phrases including "I'm the ghost with the most" and "You gotta say my name three times".

The MDS Mega Scale Talking Beetlejuice is dressed to kill in his iconic striped suit and sandworm stompin' boots. He parades his unkempt, grisly green hair and flashes a yellow-toothed smile.

The MDS Mega Scale Talking Beetlejuice stands approximately 15" tall and features 11 points of articulation. He is packaged in a collector friendly window box, perfect for display.

The MDS Mega Scale Talking Beetlejuice is available for preorder at https://www.mezcotoyz.com/mds-mega-scale-talking-beetlejuice 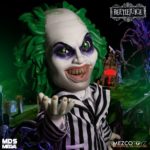 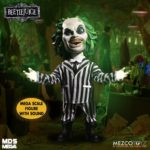 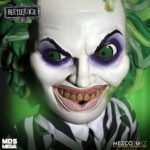 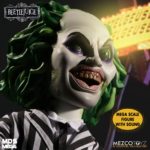 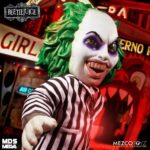 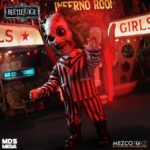