"When Rock-Bottom is just the beginning, you’re bound to end up DEEPER THAN HELL." Now available from Encyclopocalypse Publications, Joshua Millican's Deeper Than Hell terrifies readers with cosmic horror in the Las Vegas tunnel system, and he shares his inspirations, talks making the transition from journalists to fiction author, and teases upcoming projects in our latest Q&A:

Your new novel revolves around the Las Vegas tunnel system, which not too many people may know really exists. How did you first become aware of the underground network of tunnels that the people that live there?

I saw a documentary in the 1990s called Dark Days which is about a homeless community in New York City that lived in an Amtrack tunnel. I was instantly fascinated by folks willing to live underground. It's like, a drastic separation from society at large. Then I read the nonfiction book The Mole People: Life in the Tunnels Beneath New York City by Jennifer Toth. I hate the term "Mole People" because I think it's dehumanizing, but the book is legit. She discussed the possibility of communities that basically never come to the surface anymore, although there was no documentation. I learned about the tunnels under Vegas specifically in a Vice documentary, I think. You can find coverage on YouTube. The tunnels serve as storm drains during and often flood, so there's real danger associated with life there. So, long story short, I was hooked on the idea of permanent, underground communities, and Vegas was someplace I was actually familiar with, as opposed to New York, which I've only visited once, and when I was much younger. So that's how I learned about the tunnels and why I used Vegas as a jumping-off point.

While the novel deals with cosmic horrors, it also is grounded with characters that face homelessness and drug addiction. Can you talk about your novel's main character and the struggles they face?

Deeper Than Hell is a first-person narrative told by Sonny. He ends up homeless after a mental breakdown and turns to drugs as a means of escape. There are things in his past that he doesn't want to acknowledge and heroin keeps the memories (and emotional pain) at bay. This story about a guy who keeps falling down holes instead of digging his way out is, obviously, a metaphor for addiction. But it was important for me to make Sonny real and not some 2-dimensional druggie. I wanted readers to not just relate to him, but actually put themselves in his shoes. That's why Sonny is never defined racially and his age is never revealed. But for the grace of God, as they say, it could happen to any one of us. And everyone has gone through hard times that seem insurmountable.

Speaking of cosmic horrors, can you tease some of the terrors that await our readers in Deeper Than Hell?

One aspect of cosmic horror, I believe, is coming face-to-face with something previously unimaginable--a personal apocalypse. And, those who find themselves in these situations often don't have the vocabulary to relay those experiences. So some of the terrors are beyond explanation, but Sonny crosses paths with feral humans, wannabe Cenobites, an insidious AI, a human "Transformer", a giant monitor lizard with a tail like a scorpion, and an interdimensional entity that communicates to him through an old TV set--and that's all before he arrives at his final destination.

Making the switch from editorial writing to fiction, what was the biggest challenge and how did you overcome it?

Most people know me as the former Editor-in-Chief of Dread Central, and for my journalism career of over a decade. What they don't know if that I actually came from a creative background first. I was a creative writing major at UC Santa Cruz. I was a nationally ranked slam poet in the 1990s. I've fronted a few bands. My first switch was from creative writing into journalism, so switching back to fiction was kind of like riding a bicycle. I never forgot. But I will say this: My years as a journalist definitely improved my writing overall. Journalism teaches you to trim the fat, to hook people in, to support your assertions. And I'll always be a journalist at some level. I'll contribute to sites and magazines once in a while and I've got a couple nonfiction projects in the works.

You've partnered with Encyclopocalypse for the release of your novel. Can you talk about why they are the perfect partner for this and how the book may have evolved since working with them?

I come from a horror movie background, and one of the things Encyclopocalypse is known for is film novelizations. So they already exist somewhere between cinema and literature--and so do I. Deeper Than Hell was inspired by horror movies as much as literature, and it was written with a cinematic eye. Encyclopocalypse is also known for their audiobooks, and there will be an audio version of Deeper Than Hell coming down the pike. And it's a real honor to be on the same imprint as folks like Mick Garris, Peter Atkins, Tom Holland, Brian Yuzna, John Penney, and Joe R. Lansdale. I mean, these guys are horror legends. And the folks at Encyclopocalypse have treated me wonderfully. I've got to thank Mark A. Miller, Sean Duregger, and Preston Fassel. Also, the cover was designed by author/artist Christian Francis. It's an amazing team and a wonderful company to be affiliated with. When Deeper Than Hell was accepted for publication, I did some major edits and even completely revamped an entire chapter. I wanted it to be perfect before it was unleashed upon the world.

Who or what would you say were some of your biggest inspirations while writing this novel?

Like I mentioned above, I was deeply influenced by horror movies. So much so, in fact, that Deeper Than Hell is stuffed with horror movie references and Easter Eggs. I was also inspired by creepypasta and conspiracy theories. I love going down rabbit holes on YouTube, and many famous conspiracy theories have been woven into the world of my novel. In terms of literature, I think folks will detect a strong Clive Barker influence. I was also inspired by the Beat poet and author William S. Burroughs, who wrote Naked Lunch.

This is part of a 2-book deal with Encyclopocalypse, which also includes a non-fiction collection. What can you tell us about that?

Later this year, Encyclopocalypse will be releasing a collection of interviews I did at Dread Central between 2016 and 2021. Over 50 interviews with some of the biggest names in horror. Rob Zombie, Robert Englund, Crispin Glover, M. Night Shyamalan, Jen and Sylvia Soska, and so many more.

Based on your experience writing Deeper Than Hell, are you working on a follow up or a new horror story? Can you tease any other non-fiction projects that you may be cooking up?

I'll give the people what they want. There's plenty of territory left to explore underground, so if people ask for Deeper Than Hell Part 2, I will happily oblige! Not to toot my own horn, but I was able to create a vast mythology that's ripe for further exploration. On the non-fiction side, I'm working on the Authorized Biography of Richard Elfman, founder of the Mystic Knights of the Oingo Boingo, writer/director of The Forbidden Zone, and older brother and mentor to Danny Elfman. He's lived a fascinating like, and he still making films. Bloody Bridget comes out this year and Forbidden Zone 2 is on his Bucket List. Richard and I have been working together, and I'm honored to be the ambassador of his life's story!

To learn more and purchase your copy of Deeper Than Hell, visit: http://mybook.to/DeeperThanHell

When Rock-Bottom is just the beginning, you’re bound to end up DEEPER THAN HELL. Fever dreams and conspiracy theories collide in an epic nightmare inspired by William S. Burroughs and Clive Barker. Follow a modern-day Dante and Virgil on a vision quest from the streets of Las Vegas, past subterranean cults and feral colonies, past the military facilities at Wonderland, past any semblance of sanity.

“A phantasmagoria of beautifully rendered madness.” - Mick Garris, creator of Masters of Horror and director of Stephen King’s Sleepwalkers 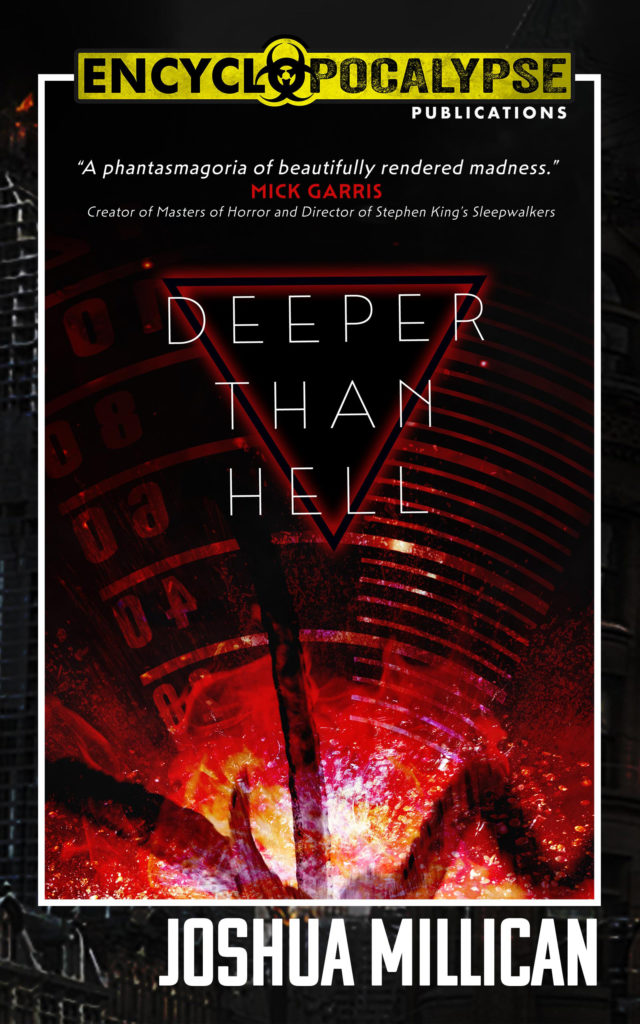