Aided by a powerful supernatural entity, a woman seeks revenge against the ruthless people who destroyed her life in the "Neoma" storyline of Maiden, an anthology-style fantasy horror comic from Heavy Metal magazine.

In addition to premiering in Heavy Metal magazine, the vengeful stories of Maiden are being released as full comic book issues in Heavy Metal's "Elements" line, and with the final chapter in the "Neoma" storyline debuting in issue #307 of Heavy Metal on June 30th and the second issue of Maiden coming out on April 28th, we caught up with creative team Michelle Sears and Bart Sears, who tell us about their initial pitch to Heavy Metal magazine, the creative process of working together as a husband and wife team, and future plans for Maiden:

Thanks for taking the time to answer questions for us, Michelle and Bart, and congratulations on Maiden!

Thank you and thanks for having us!

How and when did you initially get involved with this comic book series?

Michelle Sears: The idea for the story came from a dream I had. I spent a lot of time thinking about it and talking about it with Bart and the concept evolved from there.

Bart Sears: Michelle has always had crazy dreams. No other way to say it. And this one sparked something in her, and it infected me as well. We started developing the idea and Maiden was born… it’s really Michelle’s baby… I just helped raise it.

Did you pitch it to Heavy Metal magazine?

Bart Sears: Yes, we did. Initially we sent it to Tim Seeley and he loved it and he sent it on to Matt Medney, who loved it as well. From there we just negotiated the contract and were off and running.

Each story arc in Maiden consists of a five-chapter possession story. What drew you to the possession subgenre, and what types of possession stories can readers  expect in this unique anthology format?

Michelle Sears: Each Maiden story is different, featuring a different Maiden character. Not all of their stories are five chapters, and not all start with the Maiden’s possession of the vessel. There are 20 different Maiden stories we’ve agreed to tell with Heavy Metal, each features a different world and genre or combined genre. Horror, sci-fi, western, you name it, there is a Maiden for it.

Bart Sears: Each story is widely different: some start at the birth—or possession—of a new Maiden, some long after the Maiden’s original story and we even deal with the rare death of a Maiden in a story or two. Possession is the way the Maiden force gains control of the vessel, but each Maiden is unique, and each vessel has a different level of control, or lack of control of the Maiden force.

Michelle Sears: But each Maiden is a brutal and violent killer, completely focused on destruction and vengeance.

How long did it take you to complete the first draft of the script and artwork for the first story arc in Maiden, and how many drafts did you go through before it was ready for publication?

Bart Sears: Too long and too many. We wrote the first version of the first Maiden story, “Neoma,” almost 10 years ago and wrote it as a story, not a comic script. There are five chapters in “Neoma,” each eight pages, and it took a while to adapt our initial story/idea to a chapter format. The black and white art has taken me forever.

Michelle Sears: It’s been an interesting journey from that initial story concept to the final Maiden story. In a way, the final version is wildly different, and at the same time, the exact same story. Each chapter has been an experience and a challenge; I don’t think we write less than three versions for each, in one form or another.

Is there a particular scene in Maiden that you’re looking forward to readers experiencing?

Bart Sears: There’s a couple of pages in “Neoma: Chapter Four: The Lord’s Sin” that were really tough to draw because of the content… there’s at least one scene in every story that’s a real grabber. I honestly don’t know how to choose just one, each story is so interesting and different.

Michelle Sears: So many! So many scenes that come to mind, one from the next Maiden, Ipari, when she’s climbing out of the well and one from the sci-fi story and one from the ’80s serial killer, and on and on. We really don’t want to spoil any of them.

What has it been like collaborating with the Heavy Metal team?

Heavy Metal’s Tim Seeley, Matt Medney, Joe Illidge, David Erwin, and Cat Nuwer have really been amazing to work with. We know that sounds like the usual bullslop, but it’s actually true. Down the line they’ve been nothing but supportive and helpful.

Have they given you a lot of creative freedom with this story?

Bart Sears: As part of our co-ownership deal, we have 20 Maiden stories to tell. After that, Heavy Metal can run with it.

What is your work process like as a creative wife/husband duo? Do you work side by side, separately, or a combination of both?

Michelle Sears: Separately, side-by-side, and every combination in between. It’s a lot of back-and-forth, tweaking each other’s words until we get it right. Sadly, I cannot draw a stick figure, so Bart is on his own there…

Bart Sears: It’s strangely fun. Usually one of us has a stronger feel for a particular story than the other and kind of takes point, or starts to shape the story and then we start the back-and-forth.

It’s awesome to see Maiden released in individual comic book issues after premiering in Heavy Metal How many issues do you have planned for Maiden?

We have 20 stories mapped out, averaging probably three to five chapters per story… so we have a few years of Maiden’s saga ahead of us, just waiting to get out.

With the first issue of Maiden out now, what other projects do you have coming up that you’re excited about, and where can our readers go online to keep up with your work?

We have a few things in the works, but nothing we can share quite yet. You can follow Bart and any developments at facebook.com/bart.sears/, bartsearsart on Instagram and at BartSearsArt.com

Thank you very much, Michelle and Bart!

You're very welcome and thank you!

We have a look at a panel and artwork from Maiden below, and in case you missed it, check out our preview pages from the first issue!

Maiden - "Neoma" Storyline Synopsis (via Previews World): "A young woman has forfeited her soul to a supernatural force of vengeance, never to be redeemed, devoted to annihilation as completely as her servant, the inscrutable and frightening Hag, is devoted to her. Haunting tales of unrelenting, unrepentant revenge. An epic mythos that spans time, worlds and genre, the horrifyingly tragic curse of the Maiden is written in the blood of many. Maiden is the boogeyman of a new generation." 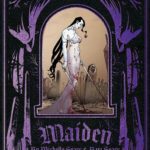 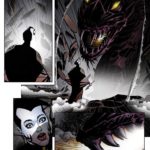 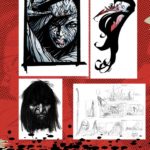