Q&A: Sarah Pirozek Discusses the Importance of Shedding Light on Real-Life Online Issues in Her New Movie #LIKE

Grieving the loss of her sister one year after her death, a young woman takes justice into her own hands when she tracks down the man who cyberbullied and sexploited her sibling in the new movie #LIKE. With the film now streaming on TVOD platforms via Giant Pictures, we caught up with writer/director Sarah Pirozek in our latest Q&A feature to discuss how she blended a thriller-noir story with timely social messages about real-life online issues such as online predation and cyberbullying.

Thanks for taking the time to catch up with us, Sarah, and congratulations on your new movie,​ #LIKE​! How and when did you first come up with the idea for this film?

Sarah Pirozek: Thank you so much—thrilled to chat. I had been thinking about making a movie dealing with online predation for a while, but I had to sit with how to do it. This was just before the #MeToo wave, so I decided to write a thriller-noir, a "genre" film, as there was a real confidence gap in financing films made by women a few years ago (genre films are more commercial, therefore more likely to find funding). And I knew I wanted a strong female lead and I didn’t want to show any abuse that goes along with the sexploitation in the backstory of the younger sister. When I saw the documentary Audrey and Daisy, I was so moved that I decided to go for it.

How long did it take you to write the first draft of the screenplay, and how many drafts did you go through before it was time to film?

Sarah Pirozek: It took me a month or two of researching and six months approximately to write it, and cleaned it up a couple of times. And a lot of walking my dog thinking about it.

Sarah Pirozek: It was a 22-day shoot. We shot in the Hudson Valley, NY, in and around Woodstock. It was great to shoot up there. We had a lot of community support and it’s a magical place that created Rosie’s “snow globe” world.

#LIKE​ explores very timely and concerning issues about online predators and the deadly effects of cyberstalking. How important was it for you to shed some light on these issues and raise awareness with your film while also telling a compelling story?

Sarah Pirozek: It was very important for me to shine a light on online predation. And yes, I could have made a very noble documentary about it, which may have been seen by a small special-interest audience, or I could make something that could function as a Trojan Horse of sorts, taking the information to a much wider audience. I chose the latter!

You and Mellicent Dyane did a great job casting this movie. What was it like working with Sarah Rich and Marc Menchaca to bring this multifaceted story to life and create the film’s palpable and realistic tension?

Sarah Pirozek: Thanks for saying that. Mellicent is an angel and they were a dream to work with, such professionals—funny, smart, and kind. I was determined to work with them on their scenes first in chronological order, so they could build up the layers of their performances. I only had Marc for eight days, so we needed a laser focus on them. Then we went back in and shot everything with Sarah outside of the bomb shelter and all of our insert shots, this way I could keep the pressure on Marc and Sarah, focusing all my energies on their relationship. With filmmaking there are always distractions, but this minimized them.

Were you influenced by any true stories or other movies while making ​#LIKE?

Sarah Pirozek: Yes, my fury about how young women are abused was definitely fueled by a very moving/powerful film called Audrey and Daisy, about how peer pressure, societal hypocrisy, and toxic masculinity are a poisonous cocktail, often leading to the suicide of the young girls effected by it. And I also leaned into a real story of predation. A girl took her life after being sexploited and shamed by her peers. It took 15 years to solve the crime (by a European police sting), where the authorities discovered that the predator had 75 victims. I was horrified to learn as I was writing the script that at that time only five states in the US had federal laws on the books against predation, probably not much has changed since.

Sarah Pirozek: The last shot! The sense of relief that washed over me was palpable, and the gratitude for all the support I got from the cast and crew working together, it wasn’t all smooth sailing, but film never is, and I would say this shoot was better than most. At the end of the day, technically it was a home run and all the actors were magnificent.

Ultimately, what do you hope viewers take away from​ #LIKE?

Sarah Pirozek: That the internet is not necessarily a safe space, that if you see a young person struggling, reach out, and if you are that young person, you are not alone, speak up. Also that female filmmakers can make kick-ass movies with a strong central core that can be made on budget on time and still (as of today) hit #28 in ALL MOVIES on iTunes. Please support and fund female filmmakers, as a society/culture we need to see and hear fresh stories with a female gaze.

Sarah Pirozek: Fantastic, they are transparent, no fuss, and I retain control over the project with a very fair profit split.

With ​#LIKE n​ow on TVOD, what other projects do you have coming up that you’re excited about, and where can our readers follow your work online?

Sarah Pirozek: I have a series called The Squatters Handbook in development. Feel free to follow me and the film on Instagram: @pixiehale and @like_thefeaturefilm. And on FB: ​@hashtagLIKEthefeaturefilm 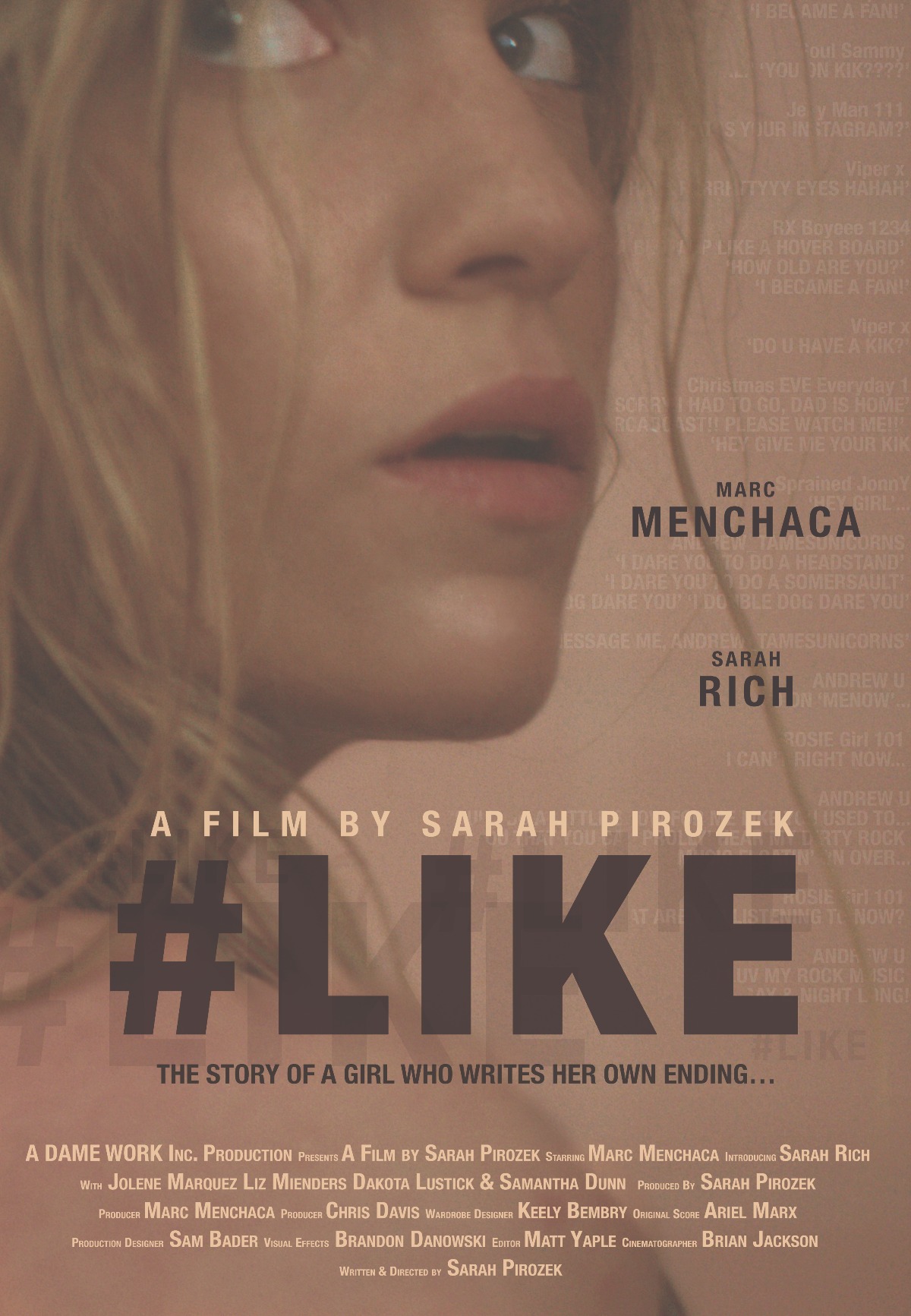