Having written and directed the 2016 film House of Purgatory, Tyler Christensen is no stranger to the horror genre, but his latest project, As Dead Things Do, is his first horror novel. A Southern Gothic story about a man trying to rebuild his marriage with his husband while also contending with their haunted family plot in North Carolina, As Dead Things Do recently debuted at #1 on Amazon’s New Releases in LGBTQ+ Horror Fiction following its publication in paperback and eBook by Off Limits Press, and we had the great pleasure of catching up with Christensen in a new Q&A feature (and we also have an excerpt from his novel to share with Daily Dead readers)!

Below, you can read our full Q&A with Christensen and read an excerpt from As Dead Things Do (just click the cover art), and to learn more about his debut novel, visit Amazon!

Thanks for taking the time to answer questions for us, Tyler, and congratulations on your first novel, As Dead Things Do! When did you first come up with the idea for this novel?

Tyler Christensen: Thank you! Like many people, my husband and I were going a bit stir-crazy working from home during the height of the pandemic, so we decided on a change of scenery, renting a place in Wilmington, NC, for the summer last year. My brother and sister-in-law live near there on a large plot of land where we’d spend a lot of time. The land has been in my brother-in-law’s family for generations, and within minutes of our first visit we were hearing stories about the strange occurrences that they’d experienced there. That was all it took.

Approximately how long did it take you to write As Dead Things Do, and how many drafts did you go through before it was ready for publication?

Tyler Christensen: I did the first draft longhand over the course of about ten weeks, I think. Then the first rewrite came in transcribing the whole thing into Word, adding and moving chapters, figuring out what it was, then there were probably three more drafts after that? Then of course little edits, and another heavier pass once my editor had combed through it. From the first day to sending the final document was almost a year.

As Dead Things Do follows the main character Caleb as he tries to rebuild his marriage with his husband after moving onto a creepy family plot in North Carolina. How important was it for you to develop and explore these main characters and their strained relationship while also weaving in elements of bone-chilling terror?

Tyler Christensen: A lot of us, especially in the horror and queer communities, are very familiar with alienation and feeling other and alone, and we know how scary our heads can get when we’re going through that. It was important to me that Caleb be wrestling with those same fears, though his loneliness is rooted in the fact that the most important person in his life betrayed him, causing him to question everything. We (I hope!) care for him and feel for him, so when strange things start happening around the property, we also fear for him.

Many horror fans are familiar with your work as the filmmaker behind House of Purgatory and Renovation, but As Dead Things Do is your first published novel. How different was your writing process for As Dead Things Do compared to writing a screenplay, and did your experience as a filmmaker help you as you worked on this novel?

Tyler Christensen: The process was freeing at first, then incredibly daunting. When I’m writing a screenplay, plot turns or scare scenes just sort of instinctively fall where they need to within the parameters of 90-100 pages. With a novel, though, when length is not a factor, I had no idea where those signposts were and whether I was pacing it properly. My filmmaking experience helped the most in the editing process, as I’m so used to working in TV and film, which is so collaborative that you can’t be precious about anything. If it doesn’t serve the plot, it’s got to go. I trusted my editor, Waylon, and if something wasn’t working, I wouldn’t argue about changing or cutting it.

As Dead Things Do is being released on August 6th in paperback and eBook by Off Limits Press. What has it been like working with the team at Off Limits Press to bring your first novel into the world?

Tyler Christensen: I was lucky that I’ve known Waylon at Off Limits Press for a few years, and we’ve consistently shared scripts and stories. I love his writing and the way he looks at story, so I knew when I realized this little story of mine started sprouting legs that I’d love to be able to partner with him to bring it to the world. He’s taught me so much about the process and helped navigate the more difficult aspects of it, so I couldn’t have asked for a better partner. Plus I love what Off Limits stands for and the marginalized voices they support.

I came across Marc’s Twitter account years ago, seeing one of his watercolors and falling in love with it. He’s got such an amazing style that to me is very reminiscent of Stephen Gammell’s work in the Scary Stories to Tell in the Dark series. Those illustrations terrified my entire generation, and have stuck with me since seeing them for the first time in grade school. Marc has that same talent, and his work is so haunting and beautiful and altogether terrifying. I highly encourage everyone check out his work on his Instagram at @owillow_waly.

While writing As Dead Things Do, were you influenced or inspired by any other books, movies, TV shows, comic books, or video games?

Tyler Christensen: You can’t write a Southern Gothic style novel without being inspired by Shirley Jackson. The Haunting of Hill House has been a source of inspiration for me for years, and then Mike Flanagan’s show of the same name absolutely floored me. And I can’t not mention Mark Danielewski’s House of Leaves.

Do you have any plans to adapt As Dead Things Do for film or television?

Tyler Christensen: Not at the moment. When I first sat down and started writing, I assumed, like everything else I’d written up to that point, that it would come together as a screenplay. But the more I wrote, the deeper I got into this character’s insecurities and fears and demons, and I realized it really had to be written for the page instead of the screen. I like letting it live that way for now.

Tyler Christensen: It varies depending on the stage of the project and whether it’s fiction or a screenplay. Some days I’ve got a producer or my reps waiting on something and I write from first thing in the morning until it’s done, no matter how long it takes. I’m lucky enough that I get to treat it as my full-time job, and no longer have to squeeze in time around a day job.

Tyler Christensen: Don’t take anything personally. I spent a long time with my self-worth entirely wrapped up in other people’s opinions on my work, and it was incredibly unhealthy. It’s so hard to accept in a creative business, but what other people think about you or what you create is none of your damn business. You just create.

Tyler Christensen: I’ve got a horror western film project that’s moving forward, albeit slowly, that I’m very excited about. And I’m putting together a couple TV pitches of some scary stories that we’ll hopefully be taking out soon.

I’m occasionally on Twitter, though do my best to be writing instead @TJC8085

Thank you so much for your time, Tyler!

To learn more about As Dead Things Do, visit Amazon!

As Dead Things Do synopsis: The land has been in the family for centuries, divided and passed down over generations.

Caleb knew when he agreed to move to his husband’s family plot in rural North Carolina that it would come with its headaches. What he never imagined, however, is that their efforts to rebuild a marriage torn apart by infidelity would soon take a back seat to the pale, skeletal thing that haunts the basement. The shadowy figure that moves about in the barn. The hateful blackness just below their feet.

It rots. It ruins. It fights to be remembered…

As dead things do.

About the Author: Releasing August 6 from Off Limits Press, AS DEAD THINGS DO is the debut novel from Tyler Christensen, an award winning screenwriter (House of Purgatory) who grew up in Wisconsin, currently living in Los Angeles with his husband and rescue pup Brom Bones. The only thing more absurd than his obsession with horror and the Green Bay Packers is his Department 56 Halloween Village collection.

Click the cover to read a bone-chilling excerpt from As Dead Things Do: 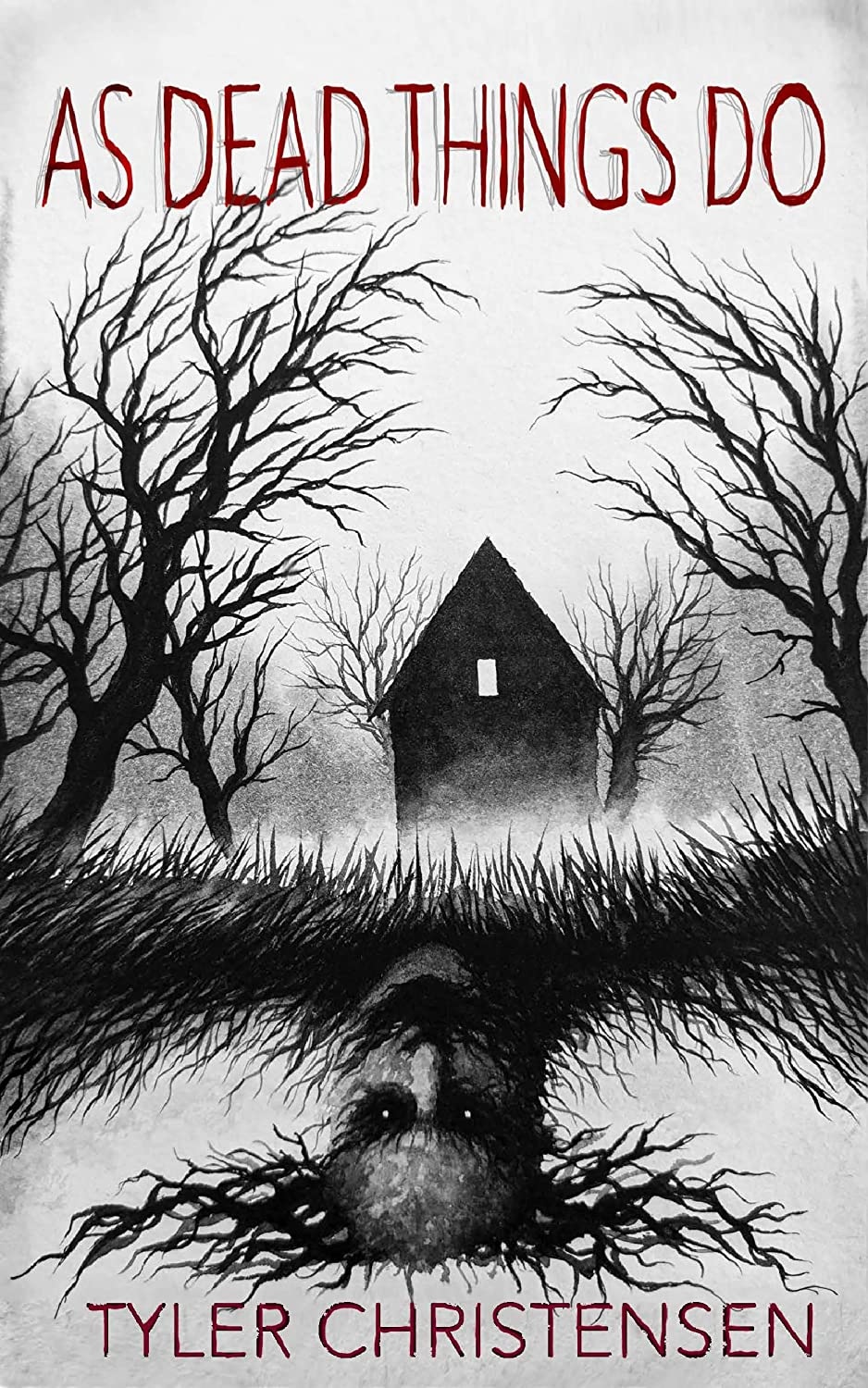