Considered demons by those lucky enough to survive them, the Xenomorphs wipe out 90 percent of the population on the once thriving planet of Ataegina in Aliens: Phalanx, the latest book by author Scott Sigler (Earthcore). Described as "300 meets Aliens," Aliens: Phalanx is out now from Titan Books, and we caught up with Sigler in our latest Q&A feature to discuss taking a different approach to the Alien franchise by placing this story in an ancient setting without modern technology, drawing from real-life pre-industrial civilizations to help shape the world of Ataegina, and raising the stakes to a near-extinction level by populating Aliens: Phalanx with tens of thousands of Xenomorphs.

Can you talk about your first introduction / experience with the Alien franchise?

Scott Sigler: I saw Aliens in the theatre when it first came out. I was blown away. The storytelling style immediately impacted my own, and has continued to be the primary influence on my work ever since. I consider the movie a masterpiece.

Can you tell our readers about the story behind your upcoming book, Aliens: Phalanx?

Scott Sigler: Aliens: Phalanx is an attempt to take the classic elements of the franchise, but remove some of the tropes we’ve come to rely upon. What if you are faced with xenomorphs, but there is no place to hide? There are no pulse rifles or grenade launchers? There is no escape shuttle to reach before the engines go critical? When there is no way to nuke them from orbit, because there are no nukes?

It is also an exploration into a larger population of xenos. Sure, one or two or three are a bad day indeed, but what about one thousand? What about ten thousand? That is many, many bad days, the kind that can lead to the extinction of the human race.

It seems to have a distinct medieval influence. Can you talk about your inspiration for the setting and story, and your desire to take things in a different direction?

Scott Sigler: This is also part of removing the tropes we’ve come to rely on in this universe. We got guns! We got bad-ass marines with growly voices! We got spaceships! We got Weyland-Yutani! I love all of those elements, but when you remove them, you’re left with characters that have to face the greatest predator in the universe in a very up-close and personal way.

The word “medieval” is most often associated with Western Europe. This story has no knights, no horses, etc. This is more of a “pre-industrial” setting, with a culture drawn from times that were already ancient before medieval times even occurred.

One way to think about Phalanx is “300 meets Aliens.” This story is far more brutal than anything the franchise has seen before. There is no standing off at a distance and taking them out. You want to live? Pick up your blade, and good fucking luck.

What type of research did you have to do, when it came to pitting a less technologically advanced society against Xenomorphs?

Scott Sigler: Most of my research came via Myke Cole’s nonfiction work Legion vs. Phalanx. The book examines the battles between two world-changing military tactical styles, and gives incredible detail as to why both “legion” and “phalanx” altered the course of history.

Aliens: Phalanx draws from pre-industrial cultures, such as the Sumerians and the Greeks, as well as from the renaissance of phalanx tactics with the Swiss and the Scotts.

Scott Sigler: How would I fare? I’d be screwed. I’m sure I’d fight hard, but if I survived that, then there is the disease, the starvation, the thirst, the constant terror… you know, all the good things that come from the utter collapse of civilization.

Why do you feel that the Alien franchise continues to resonate with fans and thrive in comic book and book form?

Scott Sigler: It’s multi-fold. First and foremost, the common fear of having something inside of you, a living cancer that you can’t take out, that’s going to kill you. This disturbs people at a primitive level.

Second, it’s dat xeno, man. The thing that is dark, comes at you from the shadows, that is stronger than you, faster than you, and once it reaches you, you can’t defend yourself because if you kill it, its blood will probably kill you. Even the strongest, toughest fighter is essentially helpless, because there is no fighting back. Everyone is afraid of it, and the franchise does a great job of setting up those gruff, bad-ass killer marines and showing that even they are screwed. I mean, if Frost and Hicks can’t win, what chance do the rest of us grunts have?

Third, it’s the recurring theme of the destructive power of human greed vs. the unifying power of a selfless opponent. An ant doesn’t want a condo in the Caymans, and when the shit hits the fan that matters, the xenos will die without a second thought if that death advances the hive in any way. That’s why you see Weyland-Yutani in almost every property, because it is an organization driven by profit and greed. That profit motive puts people in a deadly situation they could have easily avoided if people were looking out for each other instead of for money. That message affects us, resonates with us. Humans can be absolute shits to each other, while the xenos are of one heart and one mind.

Aside from Aliens: Phalanx, what projects do you have coming up?

Scott Sigler: My novel Earthcore is ideal for Alien/Aliens fans. The book is heavily influenced by James Cameron’s storytelling style, as is my novel Ancestor. If your readers like Earthcore, the sequel, Mount Fitz Roy, is a massive 1,000+ page horror/thriller that should be out near the end of 2020. If you want blood, you got it. 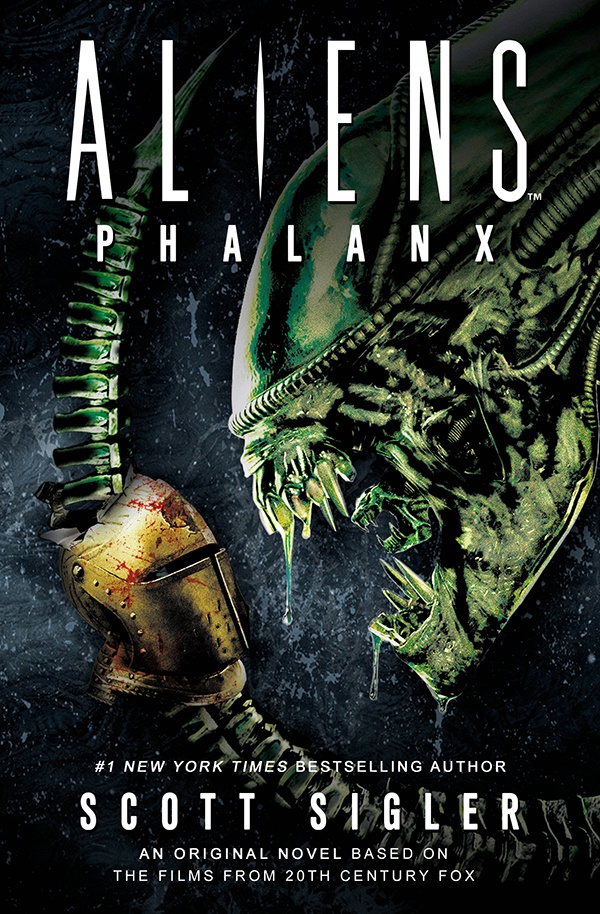