One woman's search for her missing son puts her on the path to a teenager who just might be descended from heavenly, cannibalistic giants in the new horror comic book series Daisy. Written and illustrated by Colin Lorimer, the first issue of Daisy will be released on December 8th from Dark Horse Comics, and we caught up with Lorimer in a new Q&A feature to discuss what readers can expect from his new five-issue series, how he approaches the creative process of making a comic book, and the heavenly and hellish influences that inspired him while creating Daisy.

What can you tell our readers about the origins of Daisy?

It all started with the voices in my head and the visions of heaven.

The main spark for the book was John Dee. I’d been reading up on him for years and found it fascinating that Dee, a court astronomer to Elizabeth I, actually believed that he was communicating with Enochian angels... to the point of even transcribing a divine language based on his conversations with them.  That then led me to The Book of Enoch, which was supposedly written by Enoch, the great grandfather of Noah, and concerns, amongst other things, Enoch's journey through the ten heavens and his descriptions thereof.

The part that really interested me was the tale of 200 Watcher angels who came to Earth and took human wives, damning not only themselves, but also their children in the process; children, who due to their parents' transgressions were now fated to become mad, monstrous, cannibalistic giants. So along with being cruel and unforgiving, this Old Testament God certainly knew how to hold a grudge.

I had always wanted to do something around Dee's divine language, but placing it in the modern day... with Daisy, I finally found a way to make that happen.

Also, did I mention the bloodthirsty giants! I mean, come on… it’s no-brainer!

How long have you been working on this project behind the scenes, and why is Dark Horse the perfect partner for this story?

I began working on Daisy some years back and actually got to finish it during the pandemic. I’ve worked with Dark Horse before on one of my other creator-owned projects called UXB, their Dark Horse Presents books, and also Blackout. All of which, including Daisy, have been steered and championed by Chris Warner. They have an incredible library of horror and fantasy books, and with Daisy, not only was it great to be back with them again—it just felt like a good fit!

Truth be told, I grew up reading Dark Horse comics back in the early days with the likes of Aliens, Black Cross, and DHP, so having a book published by them is always a bit of a treat!

Being both a writer and artist, can you talk about your creative process? When working through ideas and storylines, when do you write out the story versus drawing the characters and world?

I had to do quite a bit of literary research due to the rather involved subject matter. I also gathered a lot of visual reference material to help give me some added inspiration—the work of William Blake, Gustave Dore, Zdzisław Beksiński, and Francis Bacon were always close at hand.

I’ll then get into working up numerous outlines to make sure that everything is mapped out reasonably well in regards to plot. I don’t tend or need to write full, detailed scripts as I’m the one drawing it, so I focus more on the basic scene structure and dialogue. Once I get it to a place where I feel it’s working, I then start breaking it down into thumbnails, constantly refining and if needed, making “visual rewrites” as I go. It's a very organic process. I’ll then work digitally, inking over my rough layouts until I have a full, 22-page comic (26 pages in this case for issue #1). Getting into the final stages, I’ll go in and tweak the dialogue based on how everything is sitting on the page.

I’m very lucky to have Joana Lafuente and Jim Campbell working alongside me. Joana’s colour choices add so much to the world of Daisy. Truly an amazing talent. Jim's suggestions and choices on fonts and SFX are always bang on. Both of them make my life very easy.

The 5-issue miniseries follows 8 1/2-foot tall Daisy Phillips. Can you give a tease to our readers of the adventures that await her over the course of the miniseries?

Imagine you’re strapped to a rack and being read a bedtime story by the Spanish Inquisition.

I don’t think it gives too much away by saying that it really does deliver on the heaven and hell tagline… but not in the way one might have thought. Readers can expect to be taken on a very arduous journey that should, if I’ve done my job correctly, leave them wide-eyed and shocked to their very core.

What are some of your favorite horror films and/or films that inspired Daisy?

That could end up a very long list! I love a lot of the old British stuff from the likes of Hammer, and Amicus… those anthologies such as Tales From the Crypt are usually watched once or twice a year. Then there’s everything from Val Lewton’s Cat People to The Exorcist. The Innocents, The Shining, and Salem's Lot are also high on my list. I don’t know if any movies in particular influenced Daisy, but there’s probably a hint of The Elephant Man and Carrie in there with a pinch of Village of The Damned and The House that Jack Built. Some have mentioned that the first issue reminds them a little of True Detective and that’s a fair comparison, but as the book progresses it veers into some really unexpected territory that should both surprise and horrify.

Aside from Daisy, what other projects do you have in the works that you'd like to share with our readers?

I have a YA novel in the works and am in the early stages of developing another comic book. I’m also currently working on The Last of Us TV series and recently completed art duties on James Gunn’s Peacemaker and David Lowry’s take on Peter Pan and Wendy; all of which are landing in 2022, so it should be an exciting year!

You can check out Lorimer's artwork for Daisy below, and to learn more about the new comic book series, visit:

Daisy #1: "A desperate mother's five-year search for her missing son leads her to the small town of Brimount and to the mysterious Phillips family. Daisy Phillips, like many teenagers, has a hard time fitting in, but not for the usual reasons. Daisy stands eight-and-a-half feet tall and is still growing, but her troubles with ill health, daily ridicule, and custom-made clothing are only the tip of the iceberg. Daisy may well be descended from a race of cannibalistic giants spawned from the outcasts of Heaven!

Colin Lorimer is one of graphic fiction's emerging unique creative voices, and Daisy is a tale unlike any other, a singular vision both horrific and beautiful." 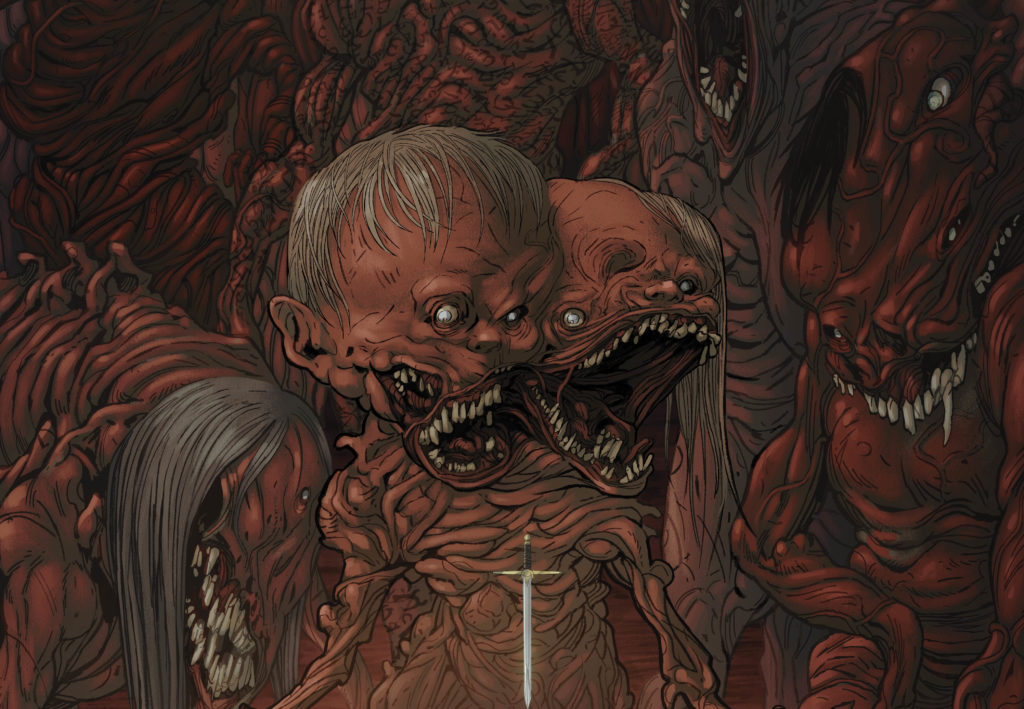 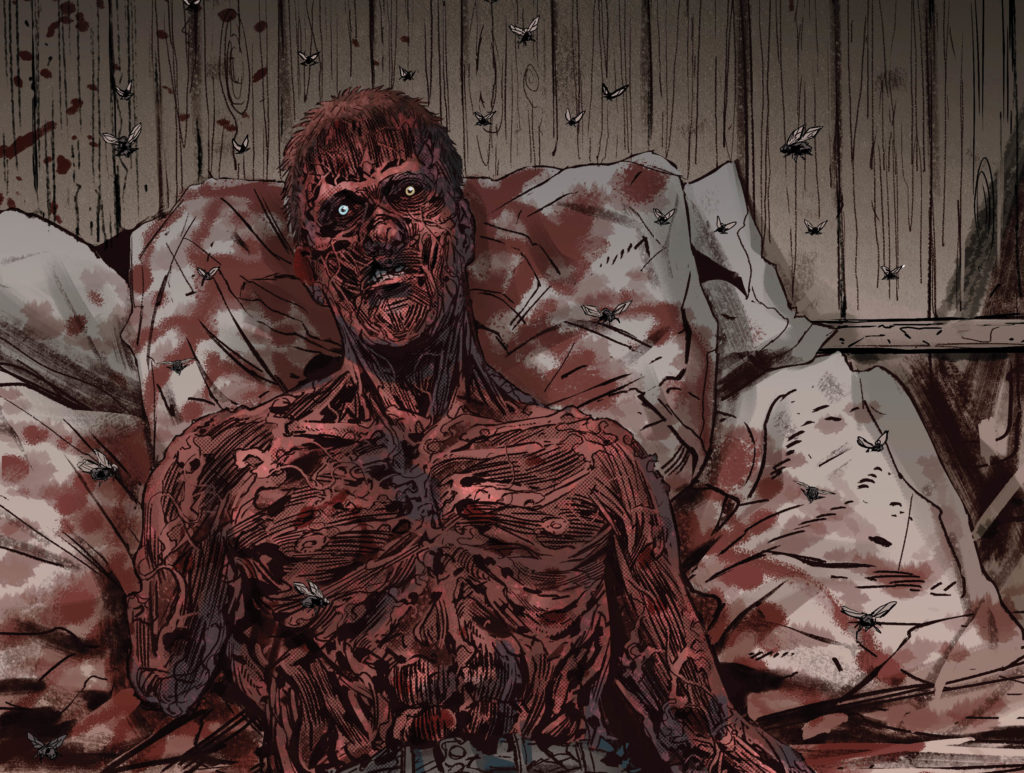 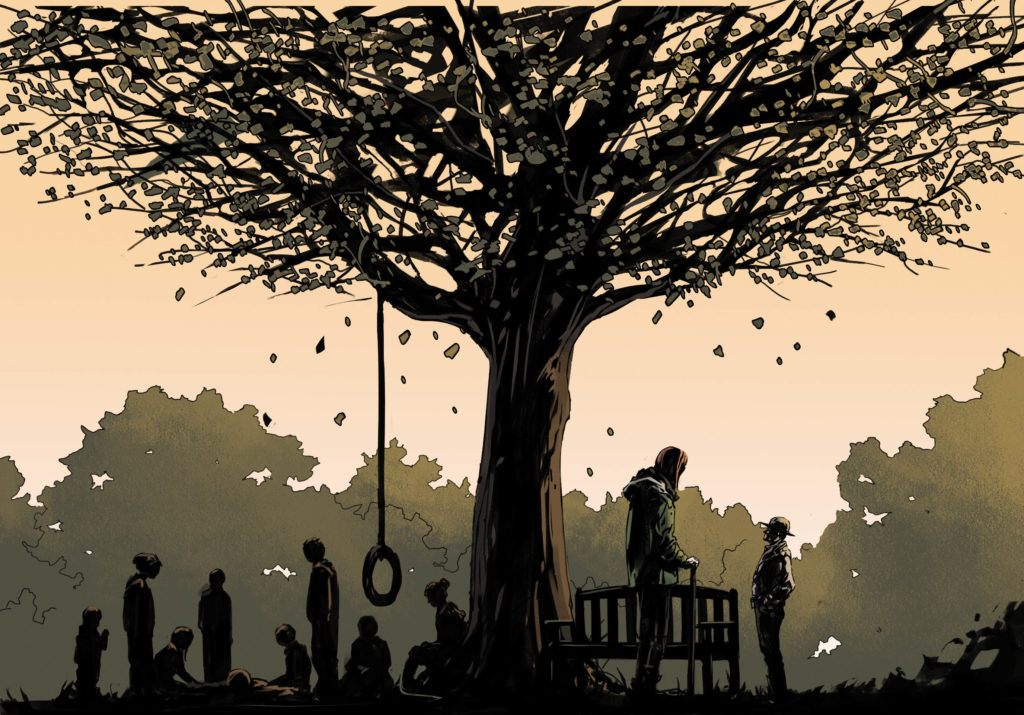