Back in 2009, writer/director Brad Sykes, producer Josephina Sykes, and their passionate cast and crew reminded viewers that "in space, everyone screams" with their sci-fi horror film Plaguers, which follows a group of space pirates battling a demonic infection that turns people into ravenous monsters. To celebrate the cult horror film's decade mark, last year Wild Eye Releasing unleashed Plaguers on a new 10th anniversary Blu-ray and DVD, and we caught up with Brad and Josephina for our latest Q&A feature to reflect on the long journey to get the film made, their fondest memory from the film's festival run, and they also discuss the new goodies fans can enjoy on the anniversary release of Plaguers!

Thanks for taking the time to catch up with us, Brad and Josephina, and congratulations on the recent 10th anniversary Blu-ray and DVD release of Plaguers! How did this 10th anniversary release come about? Did Wild Eye Releasing approach you with the idea?

Brad Sykes: Thanks for having us! We have been working with Wild Eye since 2014, when they released our horror anthology Hi-8: Horror Independent Eight. In late 2018, we were discussing the upcoming release of Hi-Death (sequel to Hi-8) when Rob at Wild Eye asked us about possibly doing a new edition of Plaguers on Blu-ray and DVD.

Josephina Sykes: We all thought that would be a great idea and I realized that if it were released in 2019, that would be ten years since the original DVD release. So, we could do a 10th anniversary edition revisiting the movie with a few new extra bonus features.

What new bonus features can fans enjoy on the anniversary Blu-ray and DVD release of Plaguers?

Brad Sykes: First of all, this is the movie’s Blu debut in the US, and is easily the best the movie has ever looked and sounded. We recorded a brand new commentary with myself, Josephina, and our longtime editor, Brad Jacques. We also included a taped Q+A after a 2012 revival screening that we did at a theater here in Los Angeles, that features a lot of cast and crew. We also ported over all the extras from a previous release, such as an extensive making-of featurette and a commentary that includes Steve Railsback.

From Alien to Event Horizon and beyond, sci-f and horror have mixed really well on the big screen over the decades. Why do you think space is such an ideal setting to tell horror stories?

Brad Sykes: Horror is often about the fear of the unknown, and in many ways, space is the ultimate “unknown”… we truly don’t know what could be out there. As a filmmaker, this is a great opportunity, because it gives you the chance to be very creative with no limitations and come up with your own monsters and their mythologies. Also, with most space horror films, there’s a feeling of extreme isolation, of being so far from Earth or any kind of help, with just a few other humans, not all of whom can be trusted! So all of that makes space a great setting for a horror film.

Were you influenced or inspired by any other sci-fi or horror movies while making Plaguers?

Brad Sykes: We wanted to bring something new to the space horror genre with Plaguers, and make the first “space zombie” film, but there were also plenty of films that influenced the writing and filmmaking throughout, from the costume design to the music score. Aside from the obvious space horror films like Lifeforce, Aliens, and Corman films like Galaxy of Terror, I’m also a big fan of Demons and Prince of Darkness, so those found their way into the DNA of the film as well.

After more than a decade, when you look back at the time when you made Plaguers, what do you treasure the most about that experience? Do you have any favorite or memorable moments that stand out?

Brad Sykes: The production was my favorite part of the whole experience, as I had a great crew, there was a bit more money to make the movie this time around, and I really enjoyed working with Steve Railsback. I had written the role with Steve in mind and the fact that we were able to get him on board, and that he was so generous and creatively involved throughout the process, made a permanent impression on me. A lot of my best memories of the shoot involve working with Steve.

Josephina Sykes: Our world premiere in Estepona, Spain at The International Horror and Fantastic Film Festival stands out. It was the very first time we showed the movie to a large audience and we were nervous about their reaction to our movie, especially since they were quiet during the movie they showed the night before. But they loved Plaguers and they were clapping, yelling, having reactions, it was an electrifying evening, one of the best reactions to one of our movies we ever witnessed. A little boy behind me was getting worked up at the scene when Landon gets her head chopped off and kept yelling “cabeza, cabeza,” which means "head" in Spanish. Since then, Brad and I called that “the cabeza shot.” It’s one of the moments that makes it worth the ups and downs of making a movie, the years, hard work, and various things you had to put up to complete it. On top, the movie won its first award, for Best Screenplay, so that was a fun celebration. Also, the treatment we got in Spain was very nice, as filmmakers we felt respected for the first time. Don’t throw rocks at me, but festival organizers in US need to learn to treat filmmakers better, with more respect, not just make money off their work. So, we’ll always have Spain!

Looking back, what was the most challenging aspect of making Plaguers?

Josephina Sykes: The fundraising was kind of a nightmare, as it took the investors a year to raise the money, and when they did it was about half of what we’d been promised. We had to jump through a lot of hoops and prove ourselves over and over again even if we always completed our movies on time and on budget. We had invited some of the investors on our previous sets to see how we work, but it’s never enough in this industry. You always have to audition no matter what your experience is, even if you’re in front of and behind the cameras. On top, they brought a friend of theirs on board to “supervise” the production. He created anger more than anything and I caught him twice trying to steal money form the movie’s account and creating a lot of trouble along the way. Eventually, I got him removed from the movie. I was doing the work of five people and didn’t need more complications, especially since we were creating a world out of nothing—building sets, creating costumes, props, miniatures, special effects on a very low budget. But we had wonderful collaborators who contributed a lot and helped us create the world of Plaguers. Otherwise, the pre-production and the shoot were great—a lot of hard work involved, but not huge obstacles because everyone was prepared, worked hard, and communicated well with us and each other.

Brad Sykes: Post was also difficult, as we ended up having to replace the original editor and visual effects producer. Sometimes you don’t get the right fit, a person you can work with, no matter how much you try. Or you bring on board somebody you worked fine with before, but they lose their minds and disappear and your drive with the footage is in their house! Josephina was ready to kill somebody in order to recover that! But everyone else was great to work with, we found cool people like Brad Jacques, who made time for us to edit the movie while super busy with other projects, Adam Lima, a wonderful VFX artist and fun to work with, sound designer James Barth, who did the job of ten post people. You have ups and downs. It’s part of the process. Because of those delays and the tight budget, post took about a year to complete.

In the decade since you made Plaguers, have your filmmaking styles changed, or do you still approach projects the same way you did back then?

Brad Sykes: I’ve always approached every film the same way, which is to do as much prep as possible and at the same time, try and be flexible to whatever issues may arise on set. Plaguers was a bit more rigid in a sense because it was all shot on stages, with a lot of green screen and VFX work that sometimes determines how you shoot things. I’ve had a looser filming approach since then, but on our new film, Hi-Fear (third and last film in the Hi-8 trilogy) we’re using VFX again and I have a stronger grasp of it thanks to the hundred-plus shots we had to manage on Plaguers. Every time you make a film, you learn something new and hopefully you can apply that knowledge to the next one.

Brad Sykes: I hope they have a good time with the movie, and appreciate the retro style of the project, with all the physical makeup effects, gore, and miniatures. When the movie was first released in 2009, the genre was in a different place and retro films weren’t really done or if they were, they didn’t get noticed. Now, everyone is doing it! Based on the reviews, a lot of people "get" Plaguers more now than they did in 2009, if they saw it at all!

With Plaguers now on Blu-ray and DVD from Wild Eye Releasing, what other projects do you have coming up at Nightfall Pictures that you’re excited about, and where can our readers follow your work online?

Brad Sykes: Our new movie Hi-Fear is in production now and slated for completion this summer. There are four segments in the movie, directed by myself, Tim Ritter (Truth or Dare), Todd Sheets (Bonehill Road), and Anthony Catanese (Girls Just Wanna Have Blood). This is the last in the series, it’s the most ambitious one yet, and we’re going to go out with a bang!

Josephina Sykes: Also, Hi-8 is being re-released this April by Wild Eye as part of their “Raw and Extreme” series, with new artwork and a new transfer that preserves the movie’s original 4:3 aspect ratio. If you didn’t have the chance to watch it, a new cool package is coming out! You can find Nightfall Pictures on Facebook and also at our official site www.nightfall-pictures.com. 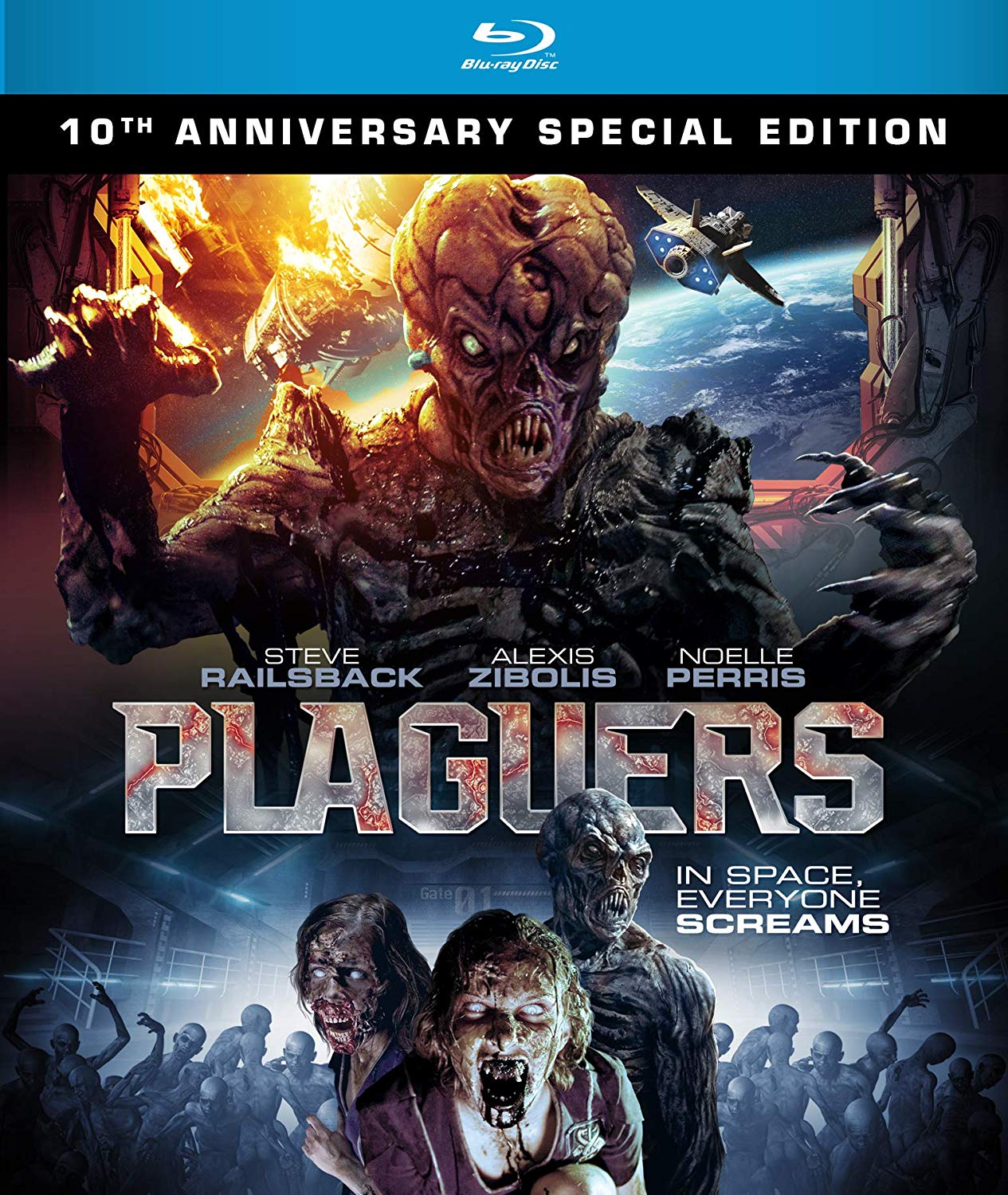