Review: SHE’S ALLERGIC TO CATS is a Meta Trip That’ll Make You Want to Vacuum

No, don’t adjust your TV set nor frantically blink to try to focus, it’s supposed to look like that. She’s Allergic to Cats, the trippy collection of scenes held together by a handheld camera, wants you to feel like you’re watching it through the eyes of the filmmaker on screen who chops “video art” together with his camcorder. That’s just one of its trippy meta elements.

Mike Pinkney, the character, not necessarily the actor by the same name who plays the character, is a loser. He came to Hollywood to make movies, but he is stuck in his job as a dog groomer, spending nights in his rat-infested house making art and lusting over Cora (Sonja Kinski), the impossibly beautiful and vexing owner of one of the pets who came by his shop. With almost nothing going his way, from his absent (not physically) landlord and his quirky producer, Mike finds excitement in his brief tryst with Cora, a woman who reads like a manifestation of, “Yeah, but she’s hot,” written by a guy like Mike.

But Mike didn’t write this movie, Michael Reich (who also directed) did, and naming his potential self-insert after the actor who plays him is one of my favourite layers of meta-trippiness this movie berates us with. This is the kind of movie you want to watch after midnight having had just enough drinks to not be too tired to pay attention to it. It’s got the self-aware disaster feel of films like Dude Bro Party Massacre III and plays like it was made by a parody of a real person who dropped out of film school after a semester and wrote it sarcastically. It feels like something that would play on the back wall of a bar that pushes the tables away after 11:00pm to make a dance floor. I felt the insatiable urge to vacuum every set piece.

In both a plea and a dunk on film nerds, Mike is all too relatable and repugnant in how he values his ability to make video art, considers horror trivia to be one of his special skills, loves Stephen King adaptations and TV movies starring John Travolta, and of course, his ability to woo a woman way out of his league with these traits. Cora herself seems to be a living homage, being the gorgeous girl next door type who is unexplainably enamoured by the nerd and spits out a grim childhood tale that stands up against the Santa anecdote from Gremlins.

Though a blast of a disaster, the movie loses itself a bit when it tries to be too weird and doesn’t stick the landing as well as cohorts like Napoleon Dynamite. The gag, unfortunately, doesn’t outlast the run time. Sure, there are rising actions to spare, but the weirdness of it all gets a bit tired by the 40-minute mark, which is only just halfway.

I had a lot of fun with She’s Allergic to Cats and appreciated its willingness to lean into its own madness, even if that means it ate its own tale. Upon first watch, I can’t imagine lining up to see it a few more times, but I wouldn’t brush off the possibility of it being a candidate for a group rewatch with an (https://laserblastfilmsociety.tumblr.com/) appropriate Twitter hashtag. It makes sense it was screened by a film society with “laser” in their name. At the very least, I expect a lot of profile pictures to change to the still of a cat at prom in a tiara about to get splashed with blood. 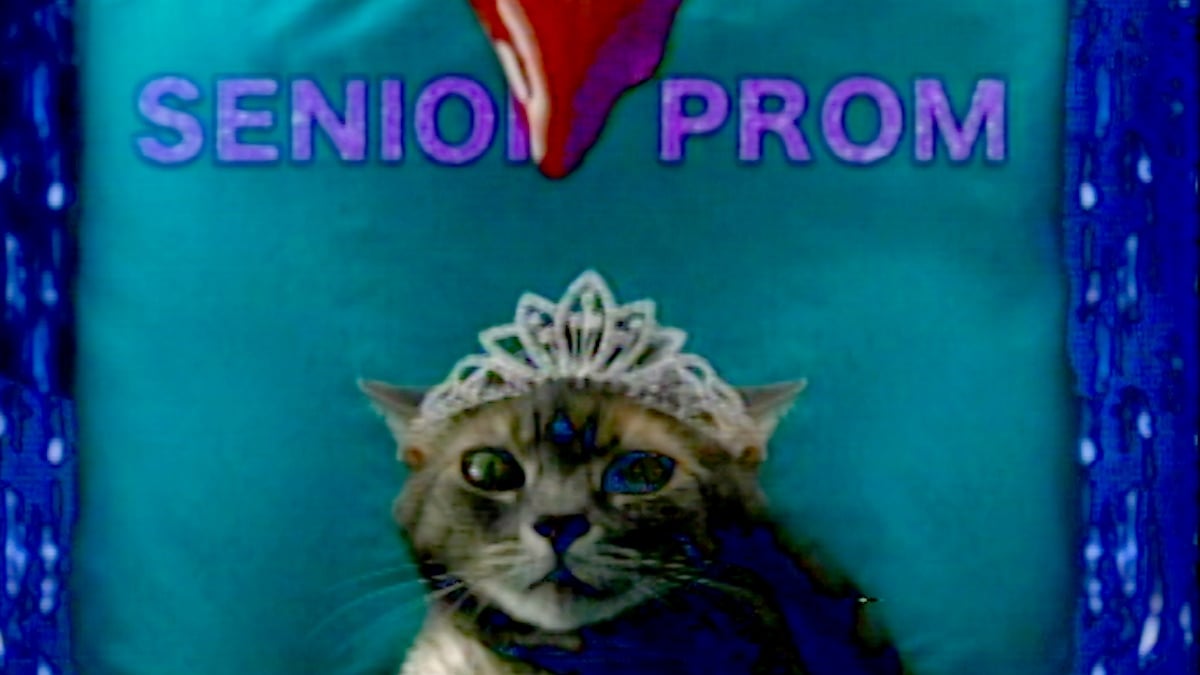